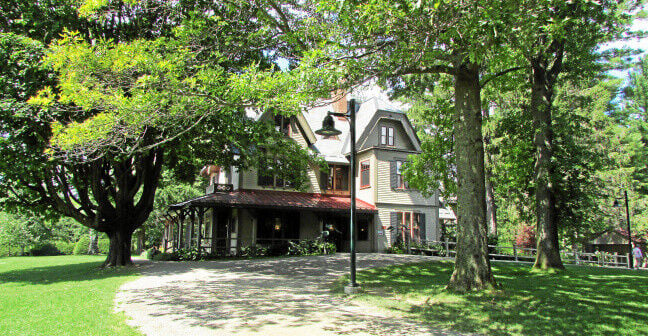 Tanglewood, now known as the Tappan House, was built by Caroline Sturgis Tappan in 1865. She purchased 210 acres with her husband, William Aspinwall Tappan, in 1849. 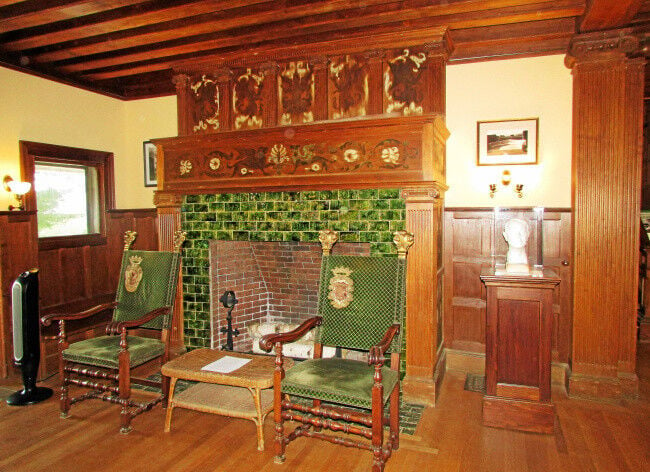 A fireplace, with paintings by Ellen Tappan Dixey, greets visitors who enter the Tappan House, which serves as a visitors center for Tanglewood.

Tanglewood, now known as the Tappan House, was built by Caroline Sturgis Tappan in 1865. She purchased 210 acres with her husband, William Aspinwall Tappan, in 1849.

A fireplace, with paintings by Ellen Tappan Dixey, greets visitors who enter the Tappan House, which serves as a visitors center for Tanglewood.

Editor's note: This is the third and final part of a three-part series chronicling the three Gilded Age Cottages that are part of the Tanglewood campus.

In September 1851, the question of who owned the apples in the orchard adjacent to the "Little Red House" rented by Nathaniel Hawthorne and his wife, Sophia, caused such a stir that it severed friendships and gave the author excuse to depart the Berkshires.

At the time, the Hawthornes had been renting the old farm house, that Sophia Hawthorne referred to as the "little red shanty," for over a year from their close friends, William Aspinwall Tappan and Caroline Sturgis Tappan. It was here that Hawthorne wrote "The House of Seven Gables," "A Wonder-Book for Boys and Girls," and began his famed "Tanglewood Tales." He would form a friendship with contemporary Herman Melville, who was writing "Moby-Dick" at Arrowhead, his nearby estate.

But in 1851, as the Sedgewicks gathered intellectuals and literary figures en masse at "The Hive," Hawthorne grew more and more disenchanted with the bucolic landscapes of the Berkshires.

"It is very singular how much more we are in the centre [sic] of society in Lenox than we were in Salem, and all literary persons seem settling around us. But when they get established here, I dare say we shall take flight," Sophia Hawthorne wrote in a letter dated Sept. 7, 1851, just days after the fight over apples had begun.

Decades later, in "Memories of Hawthorne," the couple's youngest daughter, Rose Hawthorne Lathrop, would call the quarrel over the orchard and its many fruits, "one of those entanglements concerning the petty matters of existence, which occur in the most enchanting web and woof of good feelings and high thought."

The Tappans purchased 210 acres of farm land adjacent to Highwood Manor, the home of their Bostonian friends Samuel G. and Anna Ward, in 1849 and planted the orchard of apples, peaches, pears and plums themselves. For the first two years, they lived in the typical red farm house, as they planned their own grand home. They enlisted architect Richard Upjohn, whose firm had built Highwood Manor and several other Sturgis family homes in Boston. By April 1859, Upjohn had submitted plans to the couple and by Christmas, it looked as if the house would soon be underway. But even the best laid plans can go awry. In "Hawthorne's Lenox: The Tanglewood Circle," author Cornelia Brooke Gilder details how the overworked Upjohn would abruptly leave for Europe for a much needed rest, while the Tappans shelved his renderings and settled into Highwood Manor. While renting from the Wards, the Tappans invited their friends, the Hawthornes to join them in the Berkshires.

In 1855, the Tappans and their children also departed the Berkshires, although only temporarily. They lived in Europe for the next four years, wintering in Paris and summering in Rome and the Alps. It was during this time that Caroline Tappan first "confided in her sister Anne Hooper about her difficulties with a withdrawn and distant husband," according to Gilder.

Caroline Sturgis had first been introduced to William Aspinwall Tappan by Ralph Waldo Emerson, who thought the pair would be a great match. Sturgis and her sister, Ellen Sturgis Hooper, were members of Emerson's Transcendentalist Circle, writing poetry for his publication, "The Dial." Perhaps Emerson had ulterior motives when he encouraged the courtship of the unlikely pair. Sturgis was a fiery red-head nicknamed "Diamond" by her father, while Tappan, a banker by trade, was described by Emerson as "a lonely, beautiful brooding youth" who learned to enjoy farming while away at boarding school.

When the family returned stateside, Caroline and the children would settle in Boston and William would take up residence in the farm house. (He would reside there until it burnt to the ground in 1890.) In 1861, Caroline rented a house in Newport, R.I., for the winter. By 1864, it was clear William Tappan was settled in the Berkshires and his wife, at last, began building a home on their Lenox estate. She enlisted the aid of her cousin, John Hubbard Sturgis, a young architect to build her manse — a combination of stick and Gothic styles, with five gables and a large porch for entertaining.

Following Caroline's death in 1888, Tanglewood, as the house was then known, passed to her two surviving children, daughters, Mary Aspinwall Tappan and Ellen Tappen Dixey. Ellen and her husband, Richard Dixey, an accomplished pianist, renovated the interior in 1896 and added a music room large enough for two pianos. Ellen also added the formal "Gilded Age" gardens and a hedge maze.

The sisters were know for hosting concerts and theatrical productions at the estate. Ellen's picnics, held on the vast lawns of the estate, were so well-known and liked, they were often mentioned in the social notes of the New York Times. When not in the Berkshires, the sisters retired to their family homes in Boston, where they became early supporters of the Boston Symphony Orchestra.

Following Ellen's death, her share of the estate was passed on to her daughter, Rosamund Dixey Brooks Hepburn, who along with her Aunt Mary, then in her 80s, put the family estate up for sale in 1935. The asking price according to published advertisements was $45,000. When a buyer failed to emerge, the pair decided to donate the property to the BSO.

The name Tanglewood has become synonymous with the Boston Symphony Orchestra's summer home, with its sprawling acres of lush lawns surrounding the Koussevitzkey Music Shed. It's hard to imagine these lush green lawns as hay fields, as they were in 1849, as I walk across the campus with my tour guide, Mary Lincoln, one of Tanglewood's many volunteers.

As we pass "The Shed," we pause for a moment, as Lincoln takes a moment to retell the story of the famous 1937 thunderstorm that helped raise the funds for it.

"The thunderstorm was so loud, those in attendance couldn't hear the concert," she said. "Even though there was a tent, the rain was so heavy and fell so hard, that it brought the concert to a stop. Everyone was covered in mud. During the intermission, Gertrude Robinson Smith stood up and said that something had to be done. By the end of intermission, about $30,000 had been donated. Another $60,000 to $70,000 was raised in the following weeks."

We also pause by the Lions Gate on Hawthorne Street, the original driveway for the Tappan house, where two lions sit sentinel atop pillars watching over what is now a pedestrian-only entrance. Only one of the terra cotta lions is an original. The other was destroyed by vandals in 1979, was cast from the surviving statue.

The Tappan House, now used as a Visitors Center, sits overlooking the Stockbridge Bowl with its large porch beckoning visitors to sit for a spell and drink in the beauty surrounding it. Inside the house, entered from a side door, the visitor is greeted by a large fireplace with what looks like green glass bricks and wood panels painted by Ellen Dixey. Dixey, who painted like her mother, painted most of the home's unique stencils found on the doorways and walls of the home.

As we walk down a hallway, we visit the former music room, with its blue and white tiled fireplace, and the library, where early editions of Hawthorne's books and his letter to Tappan about the apples, are on display with other historic Tappan family photographs and Tanglewood memorabilia.

Futher down the hallway, an exhibit of photographs of past BSO conductors grace the stark white walls of a room that once was used as a parlor and dining area. A window seat, or perhaps a breakfast nook, still exists in a far corner.

On the second floor, the rooms are still off limits to the general public, as there are still administrative offices located there. My guide and I are allowed to peek in many of the spaces, noting window benches and highly detailed molding around the doors and windows. We wander down a hallway that we believe led to the servants quarters. A third floor remains off limits, but we enjoy the view from a few windows on the second floor before heading back downstairs.

The house is buzzing with visitors, waiting for tours of the grounds, viewing the exhibit and asking questions at a help desk. One can only image this is what is was like when Caroline Tappan or her daughters were hosting a concert or picnic on the lawn.