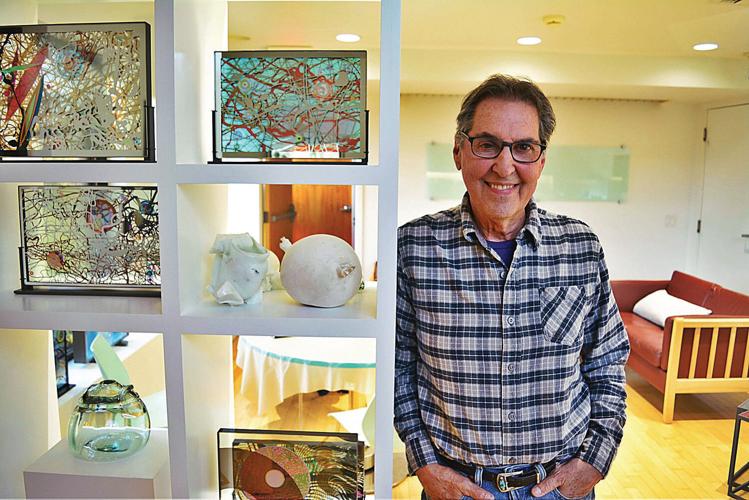 Tom Patti stands in his Pittsfield studio. Patti had a close relationship with Norman Rockwell and says his influence helped him to become an artist. He is is one of the plaintiffs in the lawsuit to stop the sale of art at the Berkshire Museum. 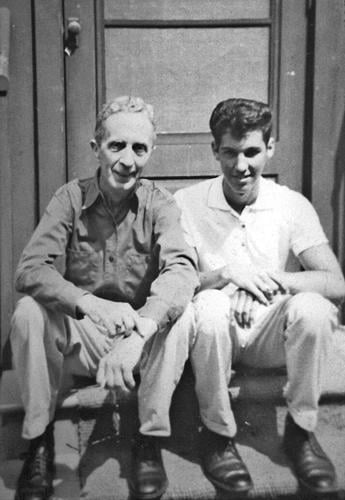 A photo in the home of artist Tom Patti shows Patti in his youth sitting with his mentor, the well-known American artist Norman Rockwell.

Tom Patti stands in his Pittsfield studio. Patti had a close relationship with Norman Rockwell and says his influence helped him to become an artist. He is is one of the plaintiffs in the lawsuit to stop the sale of art at the Berkshire Museum.

A photo in the home of artist Tom Patti shows Patti in his youth sitting with his mentor, the well-known American artist Norman Rockwell.

PITTSFIELD — Because of what came after, Tom Patti remembers the day the phone rang in his family's Lyman Street home.

He picked up and heard the caller give his name, but couldn't place it.

Put one of your parents on, Norman Rockwell said.

The teen wondered, "Am I in trouble?"

Tom Patti is a nationally known artist and a plaintiff in a lawsuit that goes to a court hearing in Pittsfield on Wednesday. But this story is not about how he joined with three of Rockwell's sons and other Berkshire County residents to stop the sale of works owned by the Berkshire Museum, including two of Rockwell's most famous paintings.

This is about why Patti believes he became an artist in the first place, despite long odds.

And it all comes back around to a man named Norman.

That phone call arrived in 1959 or 1960, Patti recalls, when he was struggling to cut it in high school, washing dishes at the hospital and experimenting with art.

To make a little money, Patti was bringing his paintings to the front of the Berkshire Museum, mingling with members of the Pittsfield Art League and trying to sell pieces to New Yorkers staying at the hotel across the street.

Patti set out what he remembers as "surreal" pieces. "Like moonscapes, and strange things that kids of that period painted, or made," he said.

And then one day, more than half a century ago, those paintings somehow pulled Rockwell into their orbit — and changed vectors in Patti's life.

Patti's parents hadn't gone to college; his dad was a barber, his mother a homemaker who worked part time. The idea of becoming a male nurse had occurred to Patti.

But around him, friends were going into the military or just getting into trouble.

"Norman approached me and asked me who I am, and where I live," Patti recalls of that first meeting outside the Berkshire Museum. "We talked about this and that. I didn't know him. I didn't know who he was."

Rockwell, an established illustrator and artist who broke through to national success when he was himself a teenager, was then in his mid-60s. Since moving to Stockbridge in 1953, he had become a frequent visitor to the museum and was good friends with its director, Stuart Henry.

Just months before, he had given "Shuffleton's Barbershop" to the museum.

Patti was a good-looking guy of 16 or 17 who had never taken an art class in high school but was not afraid to stand in front of a museum beside the products of his imagination.

"I had good skills, I guess," Patti said of his paintings. "I didn't know much about what was going on in the art world. I just had the skill and was beginning to get interested in art, and in painting."

When Rockwell called his house a few days later, Patti's mother took the phone. She knew who was calling — and filled her son in.

Rockwell invited the family to visit his Stockbridge studio, the start of a long friendship between a master and a newbie kindled by their presence one day outside the museum.

Patti's mother made him dress up for the first family trip to Rockwell's studio. He put on a pair of his brother's shoes for the occasion — a moment captured in a family photo.

The two sit side by side on the porch of Rockwell's studio. That same porch is featured today in the Norman Rockwell Museum in Stockbridge.

After chatting for a spell with the Patti family, Rockwell got down to business.

"He asked my parents what I was going to do," Patti said of Rockwell. "You know, 'What are you interested in?'"

They stood around, talking. Rockwell fixed his gaze and got to his point.

"He said, 'Tom could be a good artist. What are his plans?'"

Patti recalls saying he was thinking of taking art more seriously. He shared with Rockwell that he had seen an ad on a matchbook for the Famous Artists School and was thinking of applying.

Draw a picture of a Scottie dog, the ad said, and send it in.

No, Rockwell said. Patti remembers him saying mail-order art schools are for people in the Ozarks with no access to a professional art school. "I can still remember that like it was yesterday," Patti said.

What Patti should do, Rockwell countered, was apply to what he felt was the best art school in the country, Pratt Institute in Brooklyn, N.Y.

"I wasn't even aware that you could go to a professional art school," Patti recalls.

And then, well, there was this: He was barely getting through high school. His parents hadn't been to college and didn't know how to help him, but Rockwell did.

The artist wrote a letter of recommendation to Pratt, but Patti's so-so academic record held him up. The school suggested that the candidate spend some time in community college and reapply. Patti's parents were pulling for him.

"I was getting in a lot of trouble. They were hoping that I could find something," he said.

It took a while, but Patti had a purpose. He eventually got to Pratt, found his future career, met his wife, Marilyn Holtz, earned bachelor's and master of fine arts degrees and kept in touch with his mentor.

He followed his interests into working with glass and now runs, with Marilyn, Tom Patti Design on Federico Drive in Pittsfield. His work with glass is featured in museums and collections around the country, including the Berkshire Museum — a relationship that lawyers felt gave him standing to bring suit.

"We became good friends. He was concerned with how I was doing," Patti said of Rockwell. "There are only a few people who dig deep and understand the significance of what you're doing — and Norman was like that. He had a sensibility to recognize what I was trying to do. And he encouraged it."

Patti remained in touch with Rockwell, who died in 1978. Fifteen years later, Patti joined the board of the Norman Rockwell Museum, serving from 1993 to 1999.

Sitting at a table in his Pittsfield studio, surrounded by the fruit of years of artistic experimentation, Patti said that long-ago phone call, the letter of recommendation, everything, have come back to him.

He's not wild about sharing his Rockwell memories, being a private person, but felt that it lent weight to the legal case he and others are pursuing to stop the museum art sales.

"I've thought about all these things since this all happened," he said, referring to the museum's planned deaccession. "How fortunate I was that all these circumstances came together."

What if he'd never met Rockwell?

"I'd hate to think if it was the way all my other friends went. Probably not good," he said.

He says he remembers his first encounter with "Shuffleton's Barbershop," one of two Rockwell paintings the museum plans to sell Nov. 13. Viewers of the painting look into that shop through its plate-glass window. Patti says he wonders now if he met Rockwell on a day when he was bringing that painting to the museum.

"I can see that Norman Rockwell painting just as clear as it was on the day I saw it," he said. "When I was a kid, that's what I had to look at. Those were the paintings. I imagined what the world could be for me."

"Don't we want to have kids now have similar experiences? To look, and wonder, and to question?" he asked. "Nothing's more important than getting the painting back."