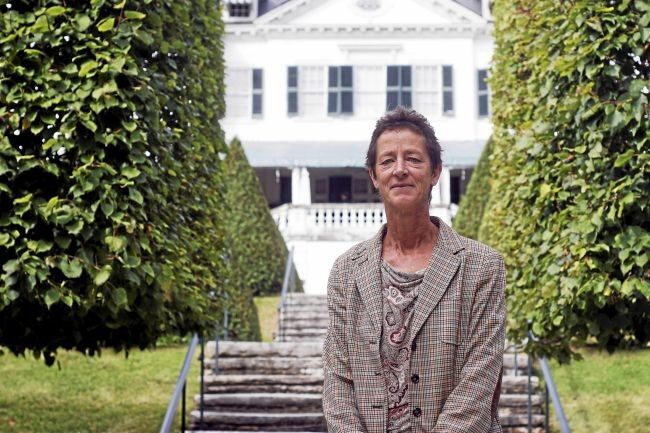 Susan Wissler, executive director of the Edith Wharton Restoration, has been credited with rescuing the historic landmark from looming foreclosure. 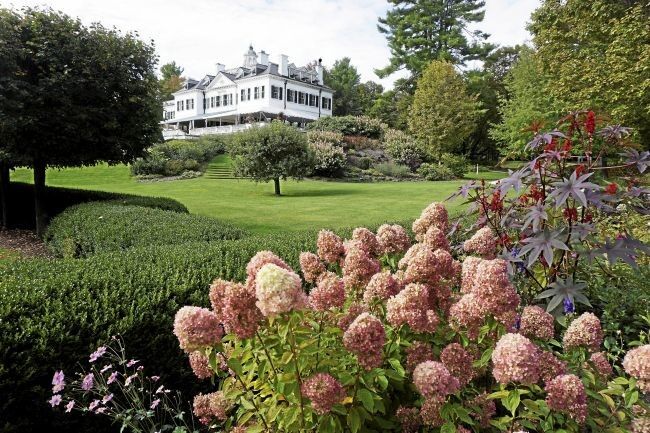 The Edith Wharton Restoration, the nonprofit that operates The Mount in Lenox, was 8.5 million in debt and near foreclosure in 2008. It has entirely paid off its debts.

Susan Wissler, executive director of the Edith Wharton Restoration, has been credited with rescuing the historic landmark from looming foreclosure.

The Edith Wharton Restoration, the nonprofit that operates The Mount in Lenox, was 8.5 million in debt and near foreclosure in 2008. It has entirely paid off its debts.

LENOX — Seven years after teetering on the brink of foreclosure, The Mount has found its way to sure financial footing.

Thanks to a yearlong fundraising effort, the Edith Wharton Restoration Inc., the nonprofit that operates the house museum and cultural center, has paid off its debt entirely, Executive Director Susan Wissler announced Monday.

The fundraising campaign, led by board of trustees Chairwoman Lila Berle, yielded about $3.3 million. Contributions from about 30 donors, including current and former board members, ranged from $1,000 to more than $1 million.

"It's a huge moment for The Mount," Berle said in a phone interview from her Great Barrington home. She credited the board members, Wissler's leadership and the 12-member, year-round staff (with 30 to 40 more in the summer) for resolving the daunting financial challenges and making the site more visitor-friendly.

Following a renegotiation of its major obligations, the organization has been facing a June 2016 deadline for paying off a nearly $3.5 million note to Berkshire Bank and $330,000 to a western New York bank executive. The exact terms of the agreement remains confidential. Berkshire Bank declined comment on the settlement.

The immediate resolution of all debts also saves The Mount from $215,000 in annual principal and interest payments to its lenders.

"The Mount has had a long history of ups and downs, for sure. It has required people willing to take a risk," Berle said. "I kept saying to the board, the $215,000 in carrying costs for the loan was not sustainable, it was a hardship. We convinced everyone on the board, they voted unanimously and they contributed to the fundraising effort."

The organization was in mired in $8.5 million of loans in 2008 in the wake of a massive house and garden restoration at the author's early 1900s Gilded Age home, and an expensive acquisition of Edith Wharton's private library from a British collector.

"I'm elated, I feel almost euphoric," said Wissler, whose leadership has been widely credited for rescuing the historic landmark from looming foreclosure.

"It came together, a confluence of circumstance, personalities and opportunity," she said during an interview at the Mount. "We moved with alacrity, things didn't drag out, we never lost momentum once we decided this was what we were going to do, and everyone involved feels just terrific about the outcome."

Wissler credited the board for acting ahead of time, "rather than letting it get to crisis proportions" next June. "It was a huge impediment. It was good foresight on their part, determination on my part and a desire for all of us to put The Mount in a position where we can focus strictly on the future."

Despite the now-resolved financial travails, Wissler described her tenure as "seven years of continued growth and vibrancy, building of our community relationships. Access to the property opened up incredibly, giving us the opportunity to become very entrepreneurial in the way we approached programming and our partnerships."

The current budget of the National Historic Landmark is about $1.8 million, half of it raised privately, and it has bolstered its bottom line by more than $100,000 through rentals for weddings and other functions.

Looking ahead, Wissler listed personal goals such as a buildup of three years' operating reserves, about $5 million; $1 million to $2 million in critical deferred-maintenance projects on the main house, and completion of multimillion-dollar building upgrades at the Stable, including a heating system, to turn it into a year-round center for programming.

She also cited potential "open space opportunities, public access rights in perpetuity, and exploring with our neighbors and the town our notion of a public park. Now that we're debt-free, those discussions can proceed untarnished. There are a lot of possible partners, a lot of very important players."

"I'm very excited about the public park concept," Wissler said. "I think that would play a vital role in the continued vitality of The Mount, it gives a whole other reason for people to care."

In 2008, The Mount nearly closed after defaulting on its payments to Berkshire Bank. The debts at that time totaled $8.5 million to the bank, the private lender from Buffalo, N.Y., and George Ramsden, the British collector who had sold Wharton's personal library of 2,700 volumes back to The Mount for $2.6 million in 2005.

The foreclosure was forestalled, Wissler said, after an emergency "Save the Mount" campaign raised about $2 million, including an $800,000 gift from the JM Kaplan Fund. Gordon Travers, the board chairman in 2008, negotiated with the bank and other lenders, restructuring the debts under new terms that included significant savings as well as an extended time for payoffs.

That year, Stephanie Copeland, who led the $13 million project to restore The Mount's house and gardens and oversaw the purchase of the Wharton library, resigned under pressure as debts mounted, threatening to sink the organization. She was succeeded by Wissler, who had been her deputy.

Berle, returning three years ago as board chairwoman to the organization she had helped create in 1980, tripled the number of trustees.

Copeland, who now lives in Lee, was described by Berle as being "very happy" to learn of the financial settlement.

"She took a huge risk but she was brilliant," Berle said of The Mount's former leader. "Without that, we wouldn't have had a chance. The gardens have been so beautiful and the library is increasingly important."

Wissler has turned what had been a traditional house museum to a full-fledged cultural center with readings, musical and theatrical performances, and art exhibitions — notably Ann Jon's SculptureNow, which found a home at The Mount starting three years ago.

At the same time, interest in Wharton's literary legacy has surged in the United States and abroad, helping fuel a sharp increase in annual attendance from 25,000 in 2008 to about 40,000 currently — about 40 percent of them part- or full-time Berkshire residents, the rest from out of the area.

The house and property will be open free of charge to all Berkshire County residents throughout October.

"There's no question that The Mount's revival is linked to Wharton's," said Wissler, noting a potential TV miniseries based on "The Custom of the Country" that would star Scarlett Johansson and "Downton Abbey" creator Julian Fellowes' possible NBC series titled "The Gilded Age."

1902-1911: Edith Wharton designs and builds TheMount as a writer's retreat. While in residence, she writes six novels, including "The House of Mirth," "Ethan Frome" and "The Custom of the Country." The dissolution of her marriage forces the sale of her home in 1911.

1971: The site is designated a National Historic Landmark.

1977: The Mount is purchased by developer Donald I. Altshuler.

1978-2001: Tina Packer's Shakespeare & Company rents The Mount. The company lives on and performs at the property.

1980: Edith Wharton Restoration is formed as a separate entity and receives funding from the National Trust of Historic Preservation to purchase The Mount. Lila Berle becomes the first chairwoman.

1998: First Lady Hillary Clinton visits The Mount as part of a Save America's Treasures national tour.

1999: The Mount is awarded a $2.9 million matching grant by the Save America's Treasures program, the largest in its history. This grant is matched by a $1.5 million state grant.

2000: Exterior restoration of the main house is completed.

2001: Shakespeare & Company, having departed from The Mount, opens at its new location, the former Bible Speaks property in Lenox.

2002: World-class interior designers decorate the rooms of the main house as if Edith Wharton were their client. The Mount officially opens the restored main house and the grounds to the public.

2005: Renewal of the formal gardens is completed, the final phase of a $13 million restoration of the house and grounds..

2008: The Mount faces near foreclosure over missed payments to Berkshire Bank. The institution is $8.5 million in debt. Executive Director Stephanie Copeland resigns and is succeeded by Susan Wissler.

2009: The Mount's board of trustees, led by Chairman Gordon Travers, raises nearly $2 million, including an $800,000 grant from the JM Kaplan Fund, and restructures the debt.

2012: The Mount launches a yearlong initiative to celebrate Wharton's 150th birthday. Julian Fellowes (creator of "Downton Abbey") is presented with the Edith Wharton Lifetime Achievement Award. Fellowes credits Wharton, especially "The Custom of the Country," as an important influence on his career.

2015: The Mount retires its outstanding debt.