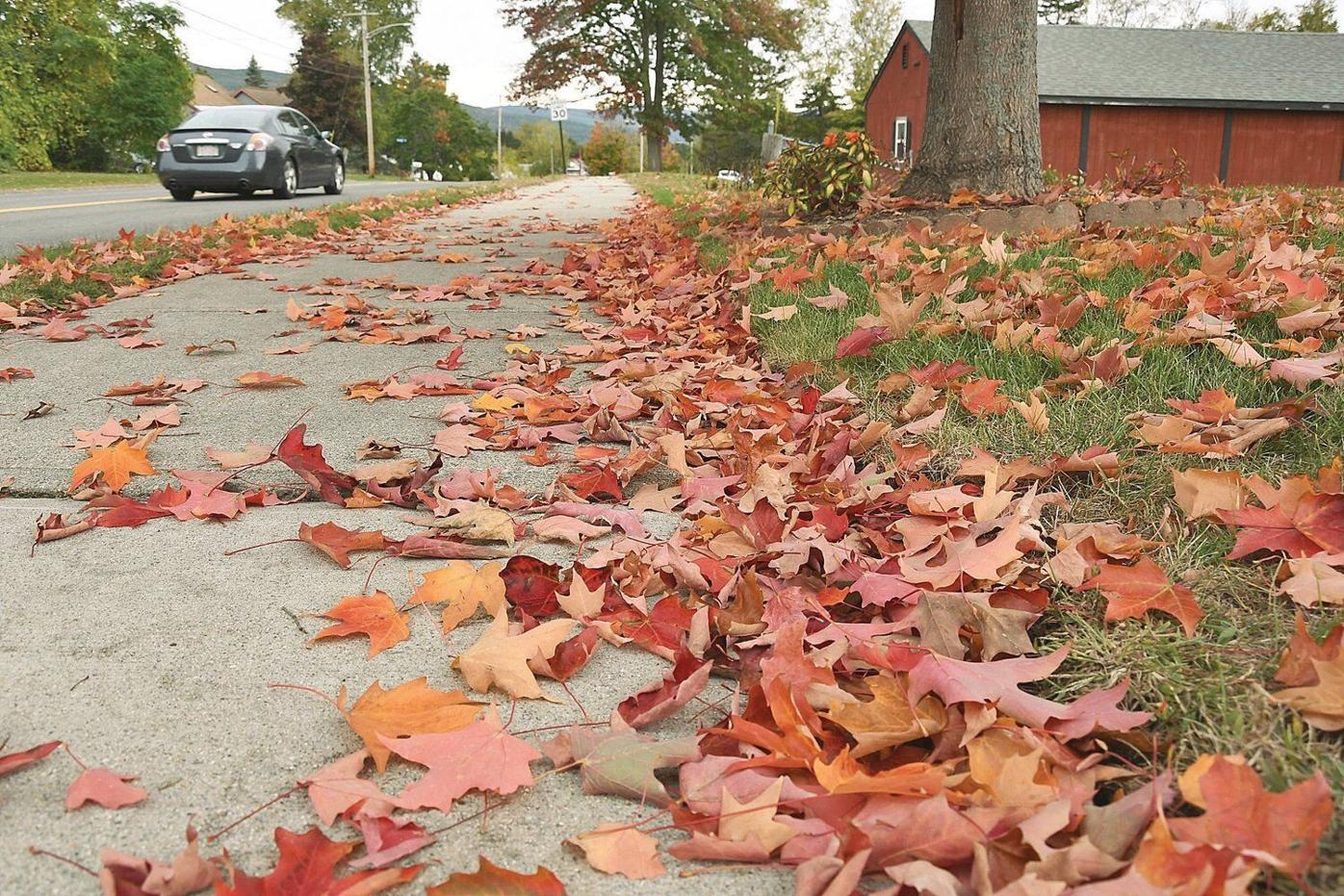 The colors of autumn are here in the Berkshires. After some wet weather last week, the forecast for the week ahead calls for seasonable temperatures, but not a lot of rain. That will give leaf-peepers the chance to get out and see the reds and oranges highlighting area trees. 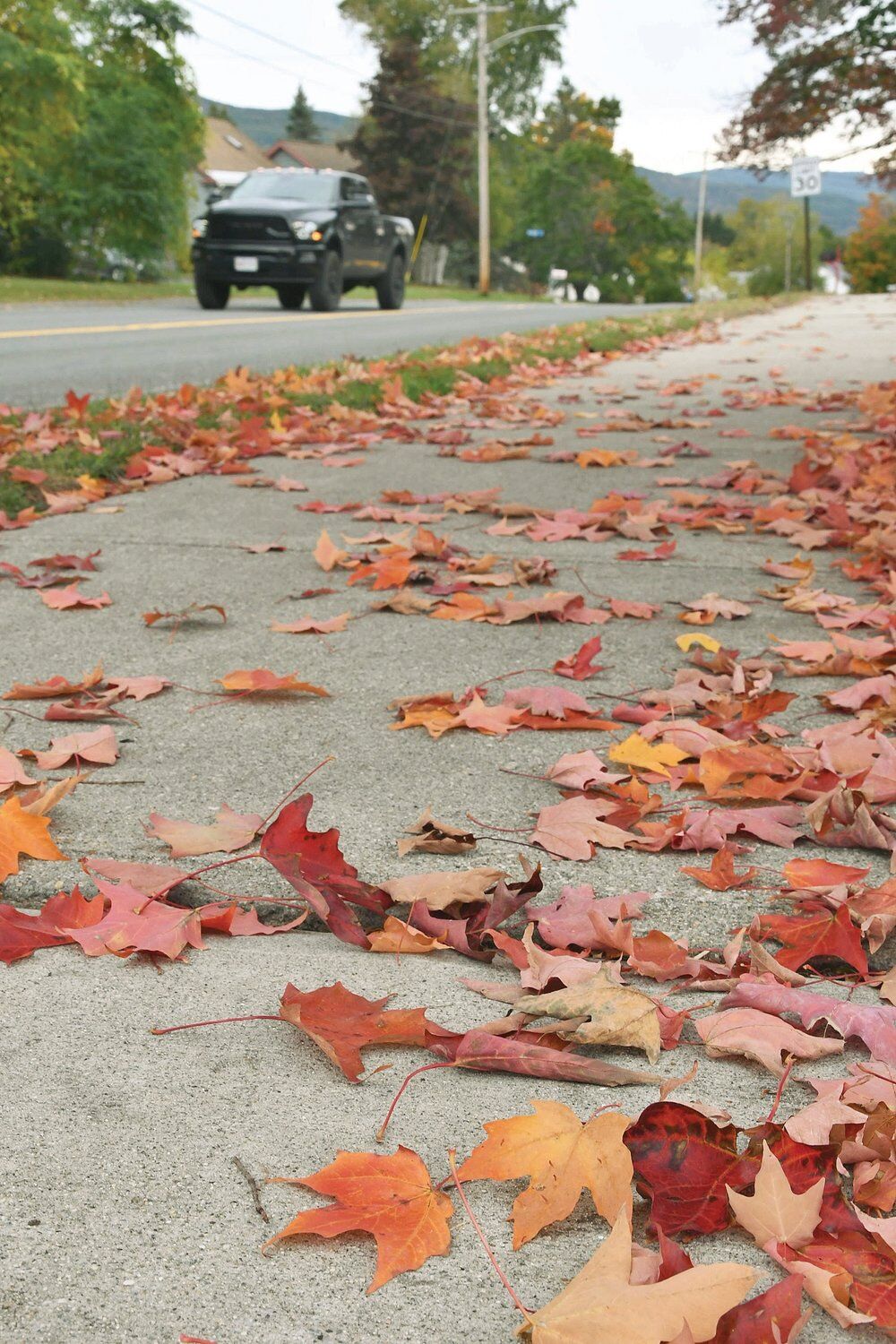 Colorful autumn leaves blanket the sidewalk along East Road in Adams on Sunday.

The colors of autumn are here in the Berkshires. After some wet weather last week, the forecast for the week ahead calls for seasonable temperatures, but not a lot of rain. That will give leaf-peepers the chance to get out and see the reds and oranges highlighting area trees.

Colorful autumn leaves blanket the sidewalk along East Road in Adams on Sunday.

"The autumn leaves blew over the moonlit pavement in such a way as to make the girl who was moving there seem fixed to a sliding walk, letting the motion of the wind and the leaves carry her forward. [...] The trees overhead made a great sound of letting down their dry rain." Ray Bradbury ("Fahrenheit 451," 1953)

Did the past week's deluge help ease drought conditions in the Berkshires? Four inches, as recorded at Pittsfield Municipal Airport, was a month's rainfall in a 16-hour period, but we were so far behind for September and the year to date that it may have been a wash, so to speak.

Total rainfall for the month, 5.15 inches at the airport, was 25 percent above average. But for the first nine months of the year, precipitation totaling just over 28 inches was 18 percent below normal, certainly a bit of recovery from the 25 percent-plus shortfall during September's first three weeks.

North Adams, where the rainstorm yielded a tad above 3 inches, racked up a September total of 3.65 inches at Harriman & West Airport, about 10 percent below average.

In Great Barrington, longtime weather observer Nick Diller reported just under 5 inches for the month, most of it in last week's storm. The total came in close to 25 percent above normal, based on his records going back to 1964.

Before the deluge, the U.S. Drought Monitor, which issues its weekly update based on reports through 8 a.m. every Tuesday, moved more of Berkshire County into the more worrisome "moderate drought'' zone.

Still in the lesser category of "abnormally dry" was a southwestern sliver, from Sheffield and Egremont to Richmond, and a northwestern slice from Hancock (the northern portion of the divided town) to Williamstown.

The USDA rated 92 percent of Massachusetts pastures in "very poor" or "poor" condition.

The early outlook for the week ahead shows a continuation of mostly dry conditions for the Berkshires, with slight chances of light showers on Monday and a 3-in-10 chance on Wednesday. Temperatures will be seasonable, with highs in the 60s and overnight lows in the 40s, though colder on Thursday night.

The look ahead into mid-month from the Climate Prediction Center shows continued below-normal rainfall, but a distinct warmup from Columbus Day weekend until Oct. 15.

For fall foliage fans, we're into peak peeping, with ideal viewing for the next week-to-10 days in the Berkshires. The leaf-turning season is a bit ahead of schedule because of trees stressed by the drought, combined with the early light frost in mid-September.

Reports from northern New England indicate the leaves are past peak from central Vermont and New Hampshire to the Canadian border, so it's best to stay close or head into Bennington and Windham counties in Vermont for a most colorful display of nature's finery.

Nationally, the National Weather Service outlook for mid- to late-week issued on Saturday sees renewed tropical storm activity over the southern Gulf of Mexico (this one named Gamma), but it will move westward into Mexico's Yucatan Peninsula.

A stalled weather system is likely to drench the southern half of Florida for much of the week.

The heat wave in the West should ease late in the week and there may be some rain approaching the Pacific Northwest by next weekend.

But here in western New England, ideal autumn weather over the next five to seven days will be a boon to outdoor recreation enthusiasts while prolonging the outdoor dining season, especially for eateries that have installed heaters for their tents, patios and porches.