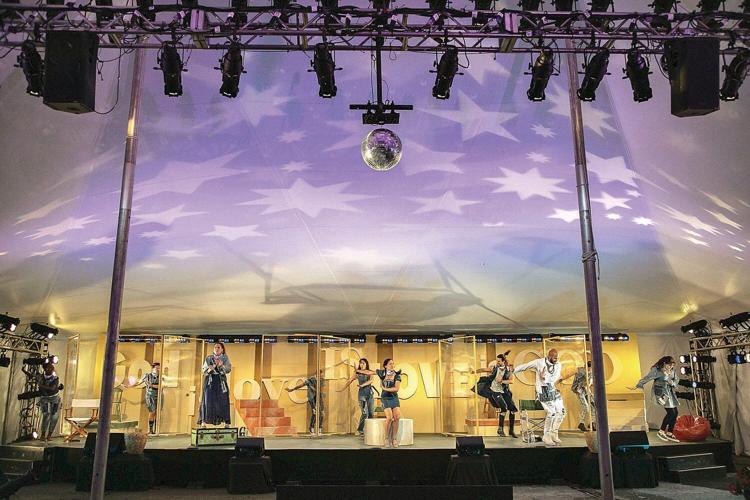 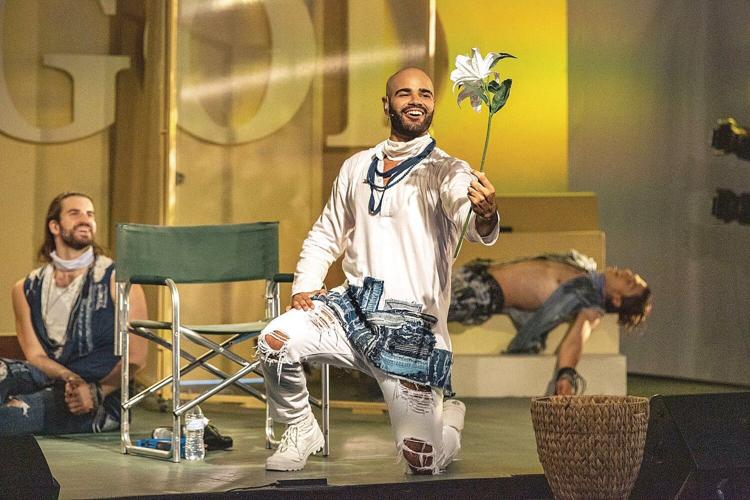 There's a tent revival in Pittsfield, though it's not the kind you think.

Just before 7 p.m. Friday, an eager audience of 75 theatergoers took seats beneath an open-air tent in the parking lot of the Colonial Theatre. The eclectic crowd of theater critics, locals, parents and friends had come to bear witness to a pandemic milestone: Berkshire Theatre Group's revival of the 1971 musical "Godspell," the first and only live musical approved for performance by the Actors' Equity Association since the COVID-19 pandemic began.

If attendees also had come hoping for an evening's reprieve from case counts and Clorox wipes, director Alan Filderman's COVID-conscious updates to the show afforded them no such easy escapism. But, harmonizing behind plexiglass and performing socially distanced choreography is, by no accounts, easy, nor would any attempt to conceal the circumstances behind this anxiously anticipated production of "Godspell" feel honest.

Acknowledging the pandemic right off the bat, BTG's "Godspell" chooses to embrace the vulnerability of current theater and champions the resilience of its 10-person company, whose talent, flexibility and commitment shine through even as social distancing measures and a lack of specificity hold the production back from reaching its full potential.

"Godspell," written by John-Michael Tebelak, and with music and lyrics by Stephen Schwartz, follows Jesus Christ (played by a well-sneakered and very smiley Nicholas Edwards) as he teaches parables to his disciples, who take turns performing rock 'n' roll-inflected hymns after each lesson. Eventually, Christ is betrayed, and the show's second act concludes with the Last Supper and the crucifixion.

With minimal plot and antiquated language, "Godspell" invites directors to modernize the show's content by reinterpreting the biblical text and peppering the parables with contemporary ad-libs, a challenge Filderman jumps to with gusto. Additions to the script include one-liners about stimulus checks, quarantine sourdough and mask acne, jokes which, for the most part, still feel too raw: After mandatory temperature checks in the lobby and a touching prologue, which reveals how devastating the theater shutdown has been for the cast, the pandemic is far too close at hand to become a successful punch line every time.

But, sanitizing and social distancing can (and does) become delightful fodder for physical comedy: During the vaudeville-inspired number "All for the Best," for example, Jesus and Judas (Tim Jones) keep each other 6 feet at bay with yardsticks-turned-canes as company members rub hand sanitizer into their palms with exaggerated percussion.

Inventive choreography like unison hand sanitizing is the brainchild of choreographer Gerry McIntyre, who had to work within intensive restrictions on the cast's movements. From tap dance numbers to step routines to coordinated tambourine playing, the "Godspell" cast performs its dynamic choreography from designated "home base" areas onstage to ensure compliance with distancing guidelines.

In "All Good Gifts," the cast even experiments with American Sign Language, an unexpected choice that beautifully complements Najah Hetsberger's breathtaking rendition of the hymn. But, the sheer number of options McIntyre explores can make the choreography feel, at times, like a socially distanced variety show rather than an organic synthesis of story and movement. The most exciting physical moments in the show are not in the stiffly choreographed numbers, but emerge as the company succumbs to the fervent power of the gospel during numbers like "Bless the Lord" and "Light of the World."

It's infinitely engaging to watch company members lose control of their bodies as they thrash about in space, to observe the joy of surrender in their faces after so many of their movements in the show and in public life have been so carefully planned. During these numbers, the setting of the tent could not feel more fitting — Jesus is a traveling preacher, his disciples, Holy Rollers, and the audience arrives at intermission ecstatic and ready for conversion.

As Christ's fate takes a turn for the worse in the second act, though, the show must shed the evangelism and enthusiasm of its cabaret-like first act. The seriousness of the second act comes on extremely quickly, and while Schwartz's harmonies still delight (in "By Your Side," Alex Getlin delivers one of the most hauntingly beautiful vocal performances in the show), the production spreads itself thin when it attempts commentary on contemporary policing in addition to COVID-19. One only just registers the villainous Romans in baseball caps that read "POLICE" before they disappear, never to be seen onstage again.

One major shortcoming of "Godspell" is that it opts to engage sporadically with contemporary social issues, such as police violence and the pandemic, instead of incorporating these issues into the thematic undercurrents of the show in a sustained and committed fashion.

Among the themes tackled in "Godspell" is betrayal, an emotion many Americans have felt strongly in recent months. By going broad once the show turns tragic, "Godspell" misses the opportunity to fashion Christ as a specific and contemporary martyr — an innocent victim of police brutality, an essential worker, an immunocompromised individual whose safety is betrayed by a maskless Judas.

But, "Godspell" offers a way out from the devastation of betrayal: radical faith. This, too, is contemporary. Faith in a more just society is what draws activists and abolitionists to the streets. Faith in a cure is what leads patients to volunteer for vaccine trials, and what allows doctors and scientists to remain hopeful for a cure as cases surge.

Faith in each other and the importance of sharing live art is what drove these theater-makers to submit themselves to twice-weekly testing, what helped them adapt to plexiglass and temperature checks, what gave them the bravery to leave their friends and families to live with one another, and what allowed them the chance to share, with tears and triumph, their joyful noise with audiences once again. And that's as sacred as anything.