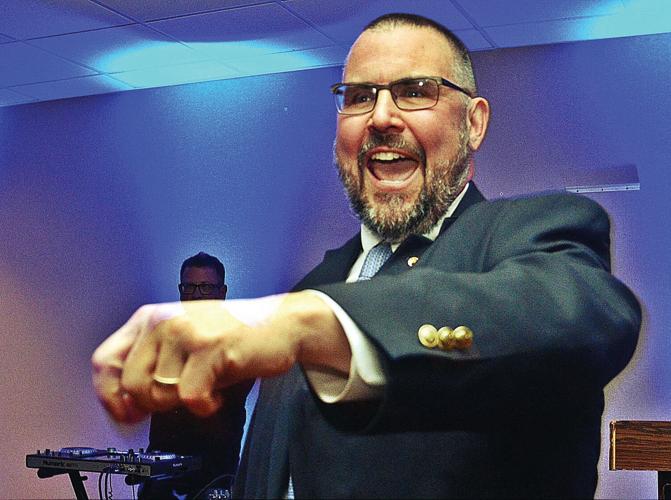 North Adams Mayor-elect Thomas Bernard celebrates as he walks out into his crowd of supporters Tuesday evening. 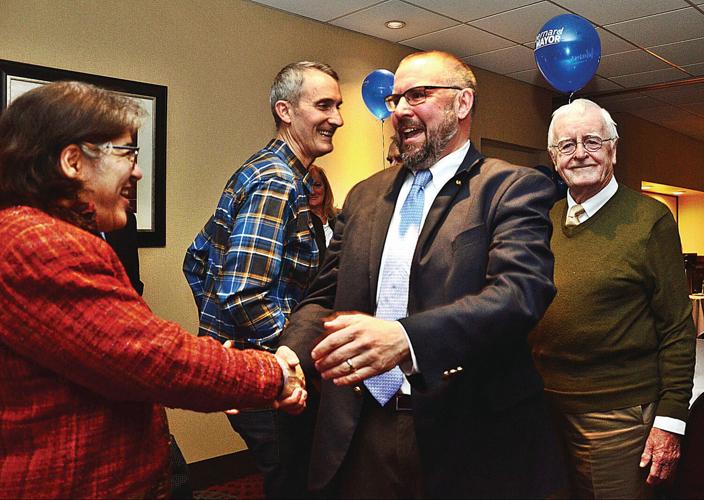 North Adams Mayor-elect Thomas Bernard celebrates as he walks into a crowd of his supporters Tuesday evening. 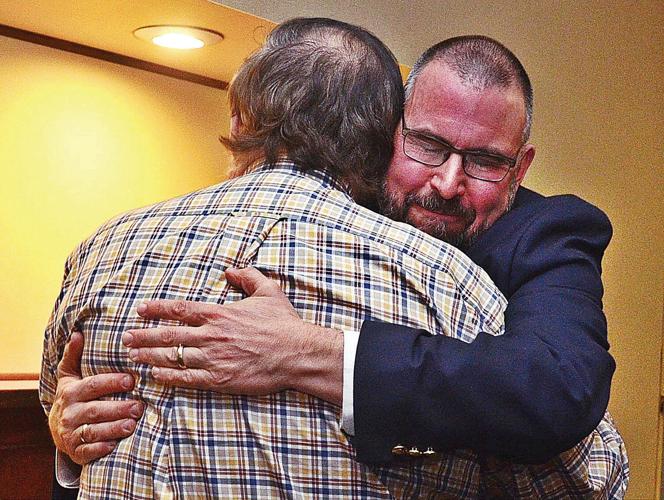 North Adams Mayor-elect Thomas Bernard celebrates as he walks out into his crowd of supporters Tuesday evening.

North Adams Mayor-elect Thomas Bernard celebrates as he walks into a crowd of his supporters Tuesday evening.

NORTH ADAMS — Thomas Bernard will be the city's next mayor.

The political newcomer handily defeated Robert Moulton Jr., by an unofficial tally of 2,404 votes to 1,023 votes, winning all five of the city's voting wards by 200 votes or more.

"I am humbled and grateful that we can celebrate with friends and toast to North Adams and we're going to wake up tomorrow ready to roll up our sleeves and work," Bernard told his supporters at the Richmond Grille Tuesday night.

The new mayor will take the helm on New Year's Day and serve a two-year term.

The election was unprecedented in recent city history, being the first in 34 years not to feature an incumbent.

Mayor Richard Alcombright, who elected not to seek a fifth term earlier this year, had endorsed Bernard and welcomed his victory on Tuesday.

"It's a decisive win. People in the city have spoken and Tom's vision resonated with them," Alcombright said.

Bernard lauded Alcombright, who has served since 2010.

"North Adams is a stronger city because of his work and that's a legacy to be proud of," Bernard said.

The race was between two candidates with firm roots in the community.

Bernard, director of special projects at Smith College, was born and raised in North Adams, graduating from Drury High School and then Williams College. He later returned to the city to work at the Massachusetts Museum of Contemporary Art, then worked at the Massachusetts College of Liberal Arts.

Moulton owns and operates Moulton's Spectacle Shoppe, which has locations on Main Street in North Adams and in Bennington, Vt. He's volunteered as the longtime president of the North Adams Ambulance Service board of trustees and served five terms on the North Adams City Council.

Moulton — who unsuccessfully challenged incumbent Mayor Richard Alcombright in 2013 before winning his seat on the City Council back in 2015 — had argued throughout the campaign that his experience in city government, private business, and the nonprofit sector made him the right choice for the job.

But Bernard countered that, throughout his career, he had built a resume that closely mirrored the responsibilities that face a mayor.

Moulton believed Mass MoCA could use its connections to find a way to see the Mohawk Theater on Main Street renovated and reused. That, he argued, was critical to a revitalized downtown.

Bernard shied away from pinning the hopes of the downtown on the Mohawk Theater, saying he had been a part of past explorations into such a project and they were economically challenging.

Moulton also put the onus on Mass MoCA and MCLA to more directly benefit the city's residents and improve the economic vibrancy of the city's downtown.

"I'm grateful to Councilor Robert Moulton for his service to the city of North Adams as well as for running a campaign that reminded us about the needs we have in this city, and about the need to build bridges of understanding — and of shared responsibility — with people who feel left behind by all the positive developments happening in North Adams," Bernard said in a statement released immediately following the election.

Moulton did not return a call seeking comment on Tuesday night.

Bernard, who heavily outraised and outspent Moulton's campaign, touted a message of economic development based on improved education and city infrastructure in the months leading up to the election.

"I want to be a mayor for everyone in North Adams, and want to hear and work to address people's concerns as well as to encourage their aspirations," Bernard stated.