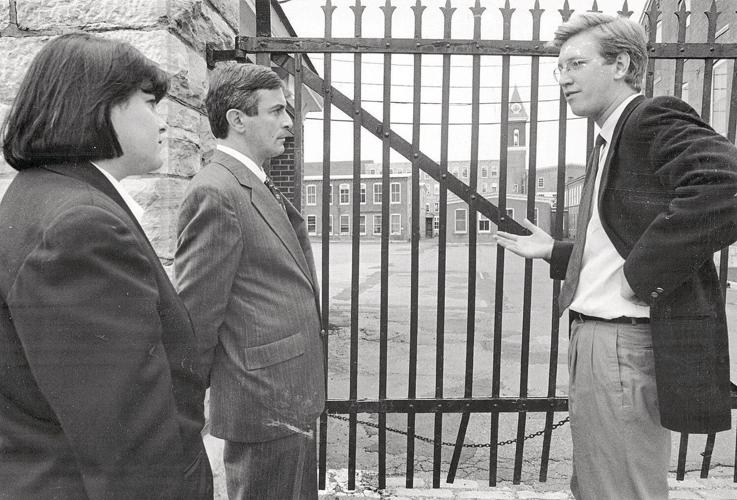 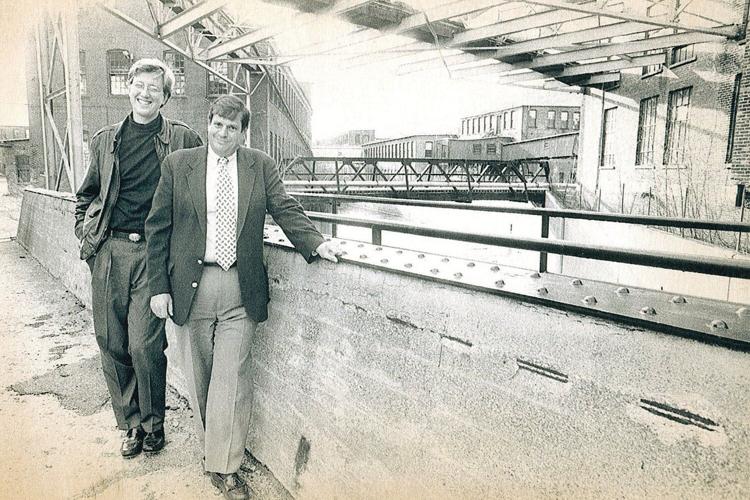 Joe Thompson, left, founding director of the Massachusetts Museum of Contemporary Art, stands with then-North Adams Mayor John Barrett III at Mass MoCA in April 1995. On April 24, 1995, the state approved a Mass MoCA bill, Bruner/Cott & Associates submitted final plans for the museum complex, and the project was certified and approved by the state and $18 million was released to the project.

Joe Thompson, left, founding director of the Massachusetts Museum of Contemporary Art, stands with then-North Adams Mayor John Barrett III at Mass MoCA in April 1995. On April 24, 1995, the state approved a Mass MoCA bill, Bruner/Cott & Associates submitted final plans for the museum complex, and the project was certified and approved by the state and $18 million was released to the project.

Here is a timeline of events that led to the creation of the Massachusetts Museum of Contemporary Art and highlights of its operation to date:

1981: Sprague Electric is sold to the Penn Central Corp., and four years later is renamed the American Annuity Group. In 1985, after 43 years of operation in the city, Sprague closes the Marshall Street plant.

February 1986: Krens meets with North Adams Mayor John Barrett III and proposes turning a vacant industrial building in the city into a showcase for collections of contemporary and minimalist art. Krens and Barrett look at the former Sprague site.

May 5, 1987: North Adams and Williams College announce they will seek $35 million from the state's Civic and Convention Center program to renovate the 28-building Sprague complex into a 435,000-square-foot contemporary art museum, with a hotel, restaurant, art book warehouse and stores. The $35 million sought is half the projected cost of $72 million.

Jan. 14, 1988: Krens is named director of the Guggenheim Foundation.

March 14, 1988: The Legislature issues its approval of a $35 million bond issue for the museum. Dukakis signs the bill eight days later. Projected opening of the museum is 1991.

May 25, 1988: Mass MoCA Cultural Commission appointed by Barrett and North Adams City Council. Krens is named chairman of the commission.

Aug. 2, 1988: The Mass MoCA Cultural Commission approves the use of $1.7 million in state money for a feasibility study. Joseph Thompson, Krens' colleague at the Williams College Museum of Art, is named founding director of Mass MoCA.

Dec. 12, 1992: Barrett reports nearly 50 percent of $12 million raised, but there is no museum management agreement yet.

May 17, 1993: Barrett says fund drive still at $4.5 million mark. Says he will not seek further extension. Appears the project will die.

Dec. 2, 1993: Mass MoCA plan springs back to life. Thompson and Sam Miller, director of Jacob's Pillow, announce several cultural venues will collaborate with Mass MoCA. Thompson re-envisions the museum to include the performing arts and sections of space for commercial use.

April 24, 1995: State approves Mass MoCA bill. Bruner/Cott & Associates submit final plans for the museum complex. The project is certified and approved by the state, and $18 million is released to the project.

1996: The inaugural project, "Desire," an exhibition of music, photography and large-scale installation pieces by David Byrne of the Talking Heads, opens.

1997: The Clark and Mass MoCA organize the conference, "Reimagining Museums for New Art," on the changing role of contemporary art museums.

1998: The Clark sponsored "EarMarks," one of the largest installations of site-specific sound art on the East Coast. Organized by Thompson, "EarMarks" was located in seven Berkshire County sites, including at the Clark.

May 30, 1999: Mass MoCA debuts with 200,000 square feet of space open to the public. It is the largest center of contemporary visual and performing art in the United States.

1999: Kidspace, a collaboration with The Clark and the Williams College of Art, opens. The Clark also sponsors "Tree Logic," the upside-down tree installation in Mass MoCA's courtyard.

October 2006: Mass MoCA announces a $6 million, privately funded project to renovate 27,000 square feet in Building 7. The new galleries, designed by Bruner/Cott, will house a retrospective of about 50 large "Wall Drawings" by conceptual artist Sol LeWitt. The project is a collaboration with the Yale University Art Gallery.

April 11, 2007: Museum officials announce that $25 million of a $37 million "Permanence Fund" has been raised. This is the first time the museum will have an endowment fund.

June 16, 2010: Mass MoCA acquires a large field near the complex and names it Joe's Field.

March 6, 2014: Mass MoCA officials announce a $25.4 million state grant that, when combined with $40 million in private donations, will allow the museum to begin the $65.4 million renovation of Building 6, which nearly doubles the size of the museum's gallery space.

July 11, 2020: Museum reopens with new rules on staggered admission times, in light of the pandemic.

Aug. 21, 2020: Museum board announces that Thompson, its founding director, will leave Oct. 29 but will spend the next year as a special counsel helping to firm up its finances.