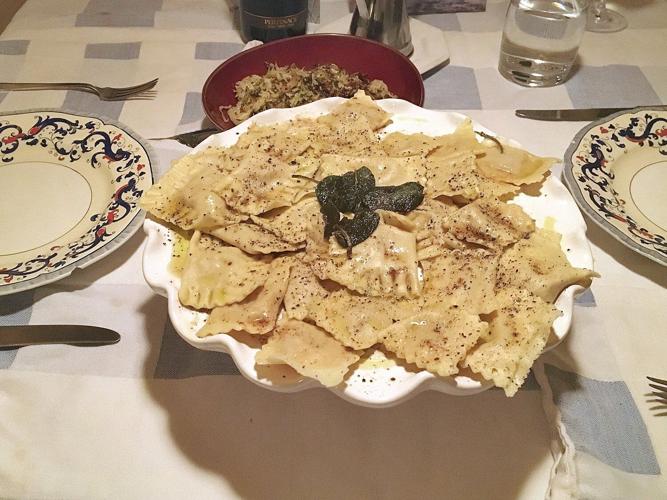 Homemade Tortelli di zucca, or pasta filled with a nutmeg squash or pumpkin filling, is a traditional dish of Mantova. 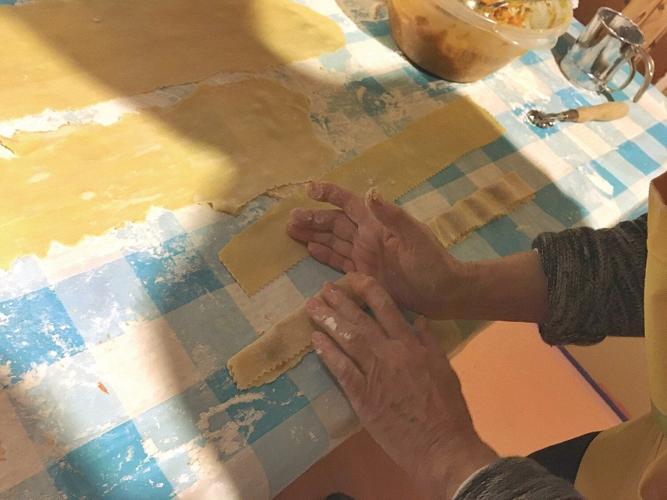 Once the dough is filled and covered, the individual pasta squares are formed by pressing the spaces in between the pasta mounds with your fingers. 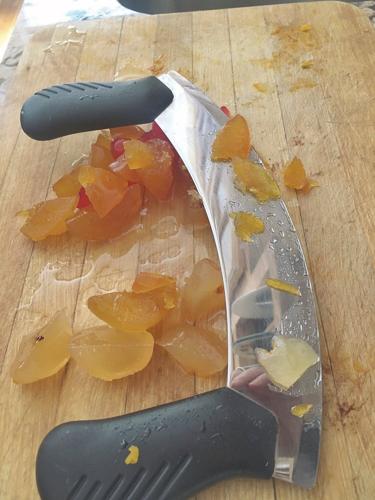 Mostarda di Mantova or Mostarda di Cremona, usually made of pear, apricot or quince, is used in the filling. 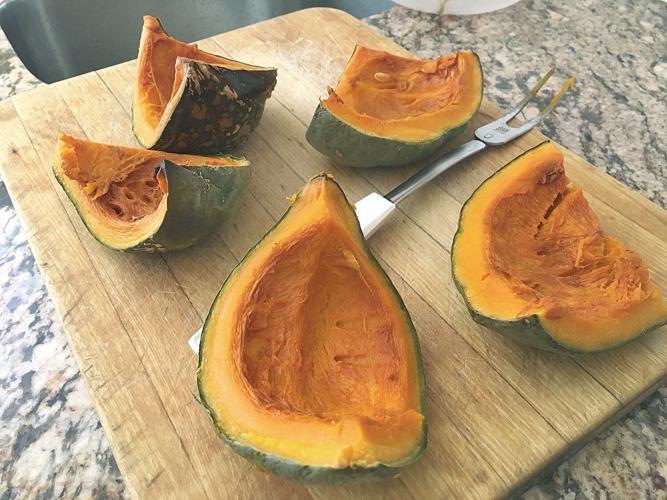 The pasta's filling is made with roasted squash or pumpkin as the base. 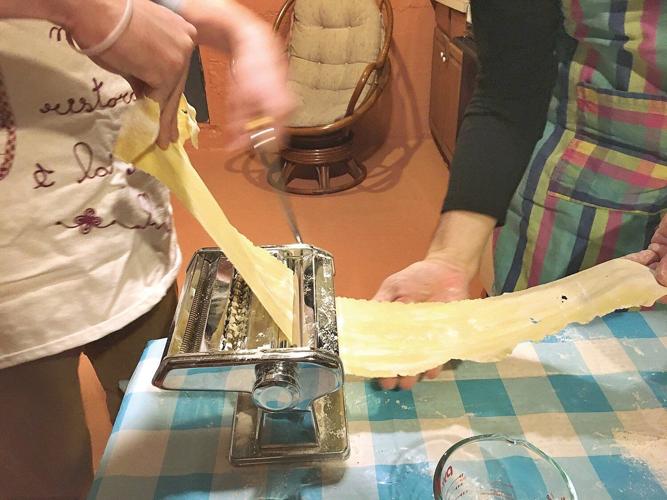 A pasta roller is used to roll out sheets of homemade pasta before filling.

Homemade Tortelli di zucca, or pasta filled with a nutmeg squash or pumpkin filling, is a traditional dish of Mantova.

Once the dough is filled and covered, the individual pasta squares are formed by pressing the spaces in between the pasta mounds with your fingers.

Mostarda di Mantova or Mostarda di Cremona, usually made of pear, apricot or quince, is used in the filling.

The pasta's filling is made with roasted squash or pumpkin as the base.

A pasta roller is used to roll out sheets of homemade pasta before filling.

Of the 1,300 names for pasta shapes in the Italian language, most are associated with particular places. All from Umbria: Lumachelle, laianelle, squadrucetti ...

This fact suggests long culinary distances between cities; in this case, between Milan and Mantova. Less than two hours apart by train, these cities became my classroom for a lesson on the endurance of regional cuisine.

It began in Milan. I invited my landlord and his wife to dinner. In the back of my mind lurked an admonition given by a since forgotten acquaintance: never make Italian food for an Italian. After a few menu ideas, dropped because of difficulty or lack of kitchen space, I settled on a hand-made (but not by me) pasta con zucca. These square pillows filled with fragrant, subtly nutmegged squash or pumpkin were found at a fresh pasta shop. I would make a simple butter sage sauce and pass freshly grated Parmesan cheese.

"Tortelli di zucca," Guido announced as he ate. "A specialty of Mantova. My grandmother lived in Mantova and we used to have it when we went to visit her," he remembered. A thirty-something, Guido traveled the world for his work, but he was a proud Milanese. A few weeks earlier, he and his wife Marilena had welcomed my husband and me to Milan with a meal of Risotto Milanese, the local specialty made with saffron.

And so, Guido initiated the lesson, but it was still vague, waiting for its completion.

As luck would have it, two weeks later I visited a friend in Mantova. A retired teacher of French and Italian, Anna Biasin Zaffanella lives in Stockbridge and each year spends time in Italy. Mantova is her late husband Luciano's home city, and though she grew up in the Veneto region, she has adopted this place. The young couple had moved to the Berkshires when General Electric recruited Luciano, then a young engineer with expertise in the transmission of ultra high voltage electricity.

Anna met me at the station, and whisked me around the city. We visited the 500-room Gonzaga palace and saw its Andrea Mantegna frescoes in the bridal chamber. Mantova was added to the UNESCO World Heritage site list in 2008. We walked through porticoed cobble streets to a little caf . Once inside, she announced we would order a Mantovan specialty, which I had probably never had: tortelli di zucca.

As I ate the fragrant dish, I nodded. Yes, it was a rare treat. Did I dare tell her that I had eaten tortelli di zucca, in Milan? Well, eventually.

A few years later, back in Stockbridge, I told her. She laughed. This year, she invited me to make it with her on Christmas Eve. Family tradition meant a few grandchildren, now adults, might be helping out, and the dish would be served for dinner.

Meanwhile, some research. About the idea of a national cuisine: "Generally speaking, it's an artificial construct," said Darra Goldstein, Williams College professor emeritus, founder of Gastronomica, a scholarly food journal, and author of books on regional cooking. "Most cuisines are regional, but for political purposes, or purposes of marketing or consolidating a larger identity, national cuisines are created. Artusi Pellegrino's 1891 book ['The Kitchen and the Art of Eating Well'], was an important step in the creation of an ostensible national cuisine." That book came 20 years after final unification of Italy. In France, she said, a similar effort was made in the 19th century: "a codifying of haute cuisine that brought regional dishes into the cannon. Cookbooks also play a role in creating a national cuisine."

There were no cookbooks when I met Anna to make the filling as taught to her by her mother-in-law, Anna Marani Zaffanella. We did so ahead of time to make the holiday pasta making easier. Christmas Eve morning, grandson Christopher, who lives in Boston, showed up. It became clear it was not his first time.

We washed our hands and put on our grembiule (aprons), before heading to the finished basement, where the annual ritual is enacted.

Christopher sifted flour into a volcano shape, and the work began. We talked and kneaded, rolled, stuffed, cut and pinched. They didn't know about the 1,300 names, about which I had learned from Oretta Zanina De Vita's Encyclopedia of Pasta. It was fun to have something to teach them. To the already rich traditions, invasions and immigrations, the Angevins, Albanians Muslims, and others brought their pastas to Sicily, Puglia and the Piedmont. And women, there kneading and cutting, gave their edible sculptures names like farfalline (little butterflies), nastrini (little ribbons), galletti, (small roosters), tempestine (little storms). Machinery, Zanini de Vita said, inspired new names, like ruote (wheels), and rotelle (propellers). Pasta was not an everyday staple in the countryside, but rather reserved for feast days, until before WWII. Yet, we have 1,300 names.

For the filling: (75 minutes, includes baking the squash)

Mostarda di Mantova or Mostarda di Cremona. 4 pieces of the fruit, not the liquid. (That might be pear, apricot, quince). Chopped very fine. If this product is difficult to find, improvisation may be in order, or convincing your favorite gourmet grocer to stock it.

In a bowl, add egg and nutmeg to the squash; mix.

For the pasta: (about one hour)

Sift 2 cups all-purpose flour, with a bit of salt, into a volcano shape

Scoop out a crater, add 4 eggs. This may require some finagling as the eggs, may run out of the crater. Blend with your hands.

Some people add drops of water if more moisture is needed. Knead about 8 minutes.

"When it feels like a ball of dough," or the dough, when pushed in, pushes back; put into a wet kitchen towel, taking only the piece to begin with, about the size of a small child's fist.

Run through the rolling machine several times, each time folding in half, and moving from lower to higher (thinner) settings. They settled on number 8, the second to thinnest. Each dough is a little different. Experience is a guide.

Lay a strip, about 1 1/2 to 2 inches, on the table, sideways, and dot about 1/2 teaspoon of filling all along the strip, imagining that you will fold the pasta strip over the filling. Fold the strip in half, covering the filling with dough. Then, pick up the strip, one end in each hand, and gently bang it two or three times on the table.

Press the spaces between mounds of filling with your finger. Then, cut with pasta cutter where you marked.

You now have pasta squares, one side the fold, and along the other 3 sides, press closed with your fingers.