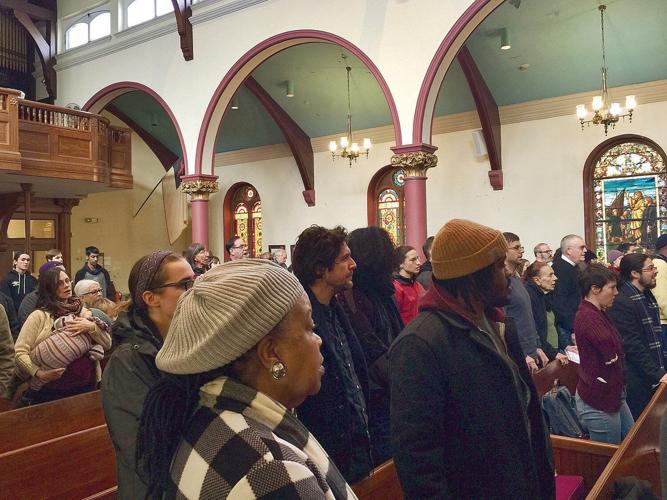 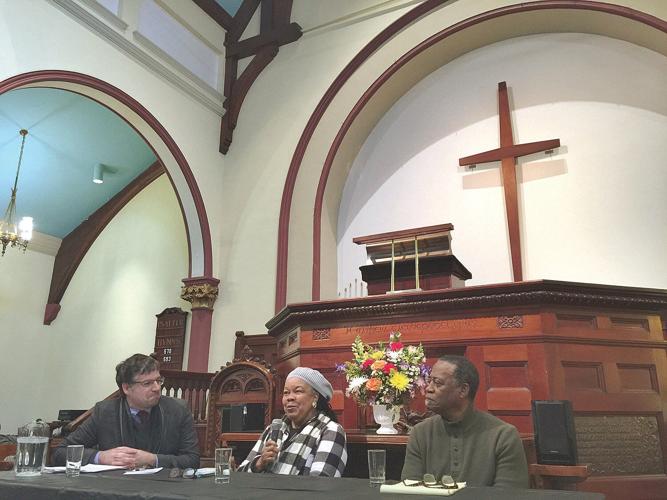 GREAT BARRINGTON — Like an arrow, Martin Luther King Jr.'s urgings are still piercing human souls and stirring the question of how to harness the power to make the world more just.

Love demanding justice, and justice demanding love, to paraphrase the civil rights leader, 51 years after he was assassinated in Memphis, Tenn.

About 100 people braved subzero temperatures and blowing snow Monday to come to the First Congregational Church to honor King at the first W.E.B. Du Bois Legacy Festival event. After a round of "We Shall Overcome," three scholars explored some elements of King's ideas and methods, prompted by moderator Justin Jackson, an associate professor of history at Bard College at Simon's Rock.

Frances Jones-Sneed, a history and political science professor at Massachusetts College of Liberal Arts, said it's important not to sit back for most of the year, then celebrate King's legacy on one holiday in a "very feel-good kind of situation."

"We sing `We Shall Overcome,' we feel good, then we go home," she added.

Naturally questions of methodology arose: to pursue justice with the shotgun or nonviolent resistance — or a combination of both.

"When you're young you want things to happen now," Jones-Sneed said. "You don't want to have to sit at the lunch counter ... it's only in my old age that I've come to appreciate Martin more."

King took the movement Du Bois started into new territory. The African-American town native, scholar and early architect of the civil rights movement, Du Bois was a giant of thinking, a quiet agitator. King's fiery sermons brought the gift of eloquent and gritty communication to the 20th century's torturous quest for racial equality.

Then there was the militant approach of Malcolm X. Jones-Sneed pointed to what he had said, which was essentially, "If Martin's methods don't work, you have to go by my methods."

Author and Bard College at Simon's Rock professor Wesley Brown noted how, when members of the Black Panther Party decided to carry unloaded shotguns in the 1960s to get the message across, they got arrested for protesting the repealing of California's open-carry law.

Active with the Student Nonviolent Coordinating Committee in Mississippi in the 1960s and with the Black Panthers, Brown said King was right to caution against taking up weapons against authorities.

"You could bring the wrath down not only on yourself but the entire community," he said.

But Brown and Jones-Sneed are older now. Both said they appreciate King's fervent yet peaceful approach, with Brown quoting Mark Twain as witnessing the way in which, "as his father got older, he found that his father got a lot smarter ... a miracle."

Whatever method, perhaps it's about not letting up. Abolitionist and former slave Frederick Douglas had the key to this, Brown suggested.

Jackson pointed to the way King had introduced Mahatma Gandhi's nonviolent resistance infused with "Christian commitment" to a country with a high rate of bloodshed, particularly against blacks.

Brown said to "involve ourselves in struggles," in the way the Jewish sage and scholar Rabbi Hillel had suggested.

And Jones-Sneed nodded at this, and added that to do it locally is the only way for an ascension to the halls of power.

"Nothing has ever come from the top down," she said. "It has always been from the grassroots up."