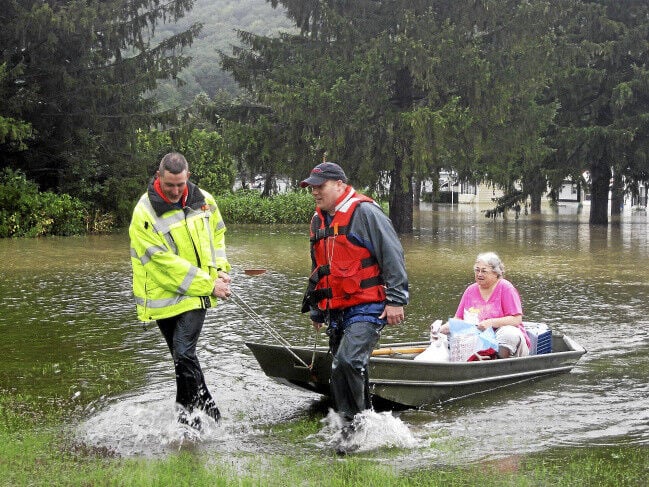 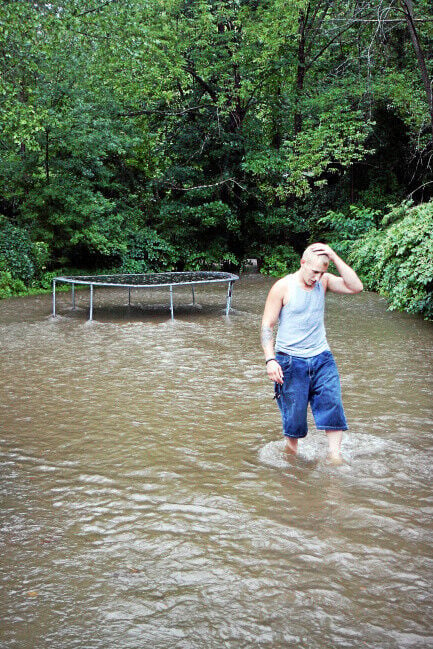 Rob Michael walks through his uncle's back yard along the Hoosac River on South Willow Street in Adams Sunday afternoon.

Rob Michael walks through his uncle's back yard along the Hoosac River on South Willow Street in Adams Sunday afternoon.

A look back at Tropical Storm Irene

It was the last weekend of August 2011 as the Berkshires and southern Vermont were shifting into back-to-school, back-to-work routines. Frequent rains had already saturated the soil; rivers and streams were running fast and high.

Nevertheless, Irene threw a surprise curve ball, shifting to the west, hitting land at New York City and then passing over Berkshire County and central Vermont.

Downgraded to a tropical storm, it still packed a punch — dumping torrents on Aug. 27 and 28, saving its knockout blows for Northern Berkshire, the hill towns and much of Vermont.

In Vermont, the total damage estimate was $733 million, with Chittenden, Rutland, Washington and Windsor counties designated as federal disaster areas.

At the National Weather Service in Albany, N.Y., Warning Coordination Meteorologist Stephen DiRienzo was on duty. Looking back recently, he acknowledged that weather scientists missed the boat.

"Our forecast worked out not so well," he said. "While we were expecting a lot of rain and we were worried about flooding, I don't think any of us really knew what was going to happen."

"It turned out a lot worse than anybody thought," DiRienzo conceded.

Atmospheric scientist Joe Kravitz, based at Berkshire Community College, recalled that "all the hype was along the coast, that it was going to make landfall as a hurricane and that a storm surge would hit New York City. But people in Vermont thought, 'OK, I'm good, I live in Vermont.' "

Kravitz also believes that forecasters failed to emphasize soil saturation so that "instead of soaking into the ground, the rain ran off directly into the streams, and all the streams in Vermont overflowed their banks immediately. People didn't picture the covered bridges being washed away, it was a catastrophe."

"The flood warnings for the Berkshires and Vermont were underplayed," he maintained. "But I don't think even the National Weather Service anticipated how extreme it was going to be, how quickly the rivers were going to rise."

By the time the storm curved northeast over New Hampshire and Maine, the Berkshires and much of Vermont had been drenched by 4 to 9 inches of rain.

Irene, born east of the Lesser Antilles islands in the Caribbean Sea, was blamed for 48 deaths — six of them in Vermont including one in the town of Wilmington — and total U.S. damage of $15.6 billion from the seventh costliest hurricane in U.S. history, according to the National Hurricane Center.

In Vermont, Irene damaged more than 3,500 homes, 500 miles of roads and more than 200 bridges, isolating 13 towns and putting many local communities under severe fiscal crisis, according to Gov. Peter Shumlin. It was the worst natural disaster in the state since a devastating flood in November 1927.

The storm's effects on Berkshire County were considered the worst since the "Great Hurricane" of Sept. 20, 1938, caused 700 Berkshire families to be evacuated from their homes, while all of downtown North Adams and the center of Adams were flooded. Martial law was declared in North Berkshire.

Pittsfield was spared the brunt of Irene's wrath.

"I would say we survived almost unscathed, considering what could have been," Pittsfield Fire Department Deputy Keith Phillips said as the skies cleared.

But countywide, more than 1,000 homes lost power while water lapped at front porches, spilled into basements, swelled over bridges and damaged many roads.

Residents had to flee their Pomeroy Manor apartments in Dalton, and rising waters forced evacuations from Sandisfield to Adams. Flooding affected the Farmington, Green and Hoosic rivers. In Becket, Route 20 was closed east to Chester. New Marlborough and Otis, where Route 8 had to be shut down for a time, were among the hard-hit hill towns.

Landslides, mudslides and a bridge undermined by raging waters of the Cold River severed a six-mile stretch of Route 2 in the Savoy-Florida area. The "Mohawk Trail" state highway linking North County to Charlemont and points east remained closed for three months until $23 million in repairs were completed.

The Spruces mobile home park in Williamstown was devastated and later closed. Eventually, all 272 residents, mostly seniors, lost their trailers and, over time, relocated.

In March 2013, the U.S. authorized a $6.13 million grant to buy and demolish the site and fund the relocation project for the residents still needing permanent homes. Highland Woods, on land donated by Williams College, has opened with 40 units of senior housing.

For the first time, the Boston Symphony Orchestra was forced to cancel a Tanglewood performance. Losses for the season finale were estimated at just over $400,000.

Then, from Sept. 5-8, the remnants of Tropical Storm Lee added more than 5 inches of rain to the Pittsfield Airport gauge, causing the Hoosic River in Williamstown and the Housatonic River in the Coltsville section of Pittsfield and in Great Barrington to reach flood stage.

Now, there's agreement that lessons have been learned.

"Big storms have multiple hazards, and we need to try to pinpoint which ones are most important so we can rank them in order of priority," said DiRienzo, the National Weather Service meteorologist who has researched past storms to help improve forecasting.

It's all about better communication, he emphasized, since "if nobody understands the forecast, it doesn't help."

At BCC, Kravitz pointed out that the National Weather Service set up a commission "to look at what they could have done to present warnings to the public so people could have been better prepared. There were a lot of warnings for inland areas, but it was not communicated well to the public that flooding was going to be a big deal."

The government commission's report asserted that "the public and media did not fully recognize the devastating flood threat that land-falling tropical cyclones pose for inland areas of New England. When there is high confidence of a historic flood event, the NWS should use all available tools and imperative language to convey the urgency and to ensure the message is timely, clear, and understood by the media and decision-makers."

Photos: A look back at Tropical Storm Irene's impact on the Berkshires in 2011

It was the last weekend of August 2011, and frequent rains had already saturated the soil; rivers and streams were running fast and high in th…