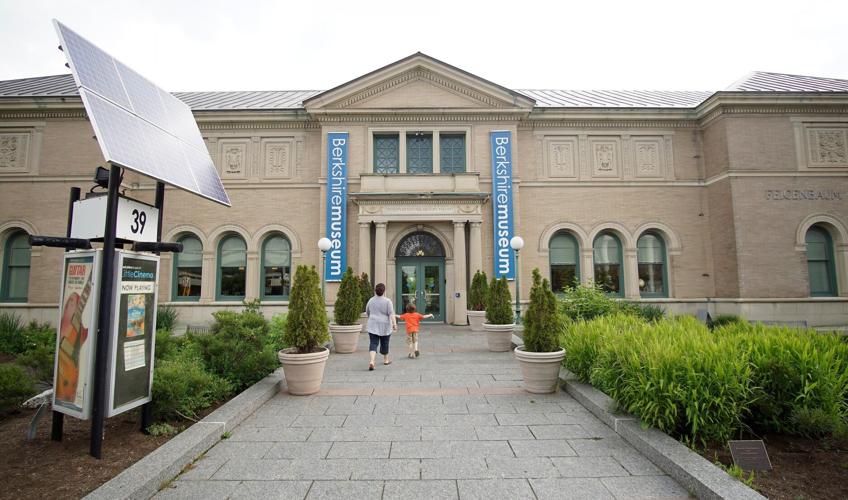 The Berkshire Museum is on South Street in Pittsfield. It was founded in 1903 by Zenas Crane. 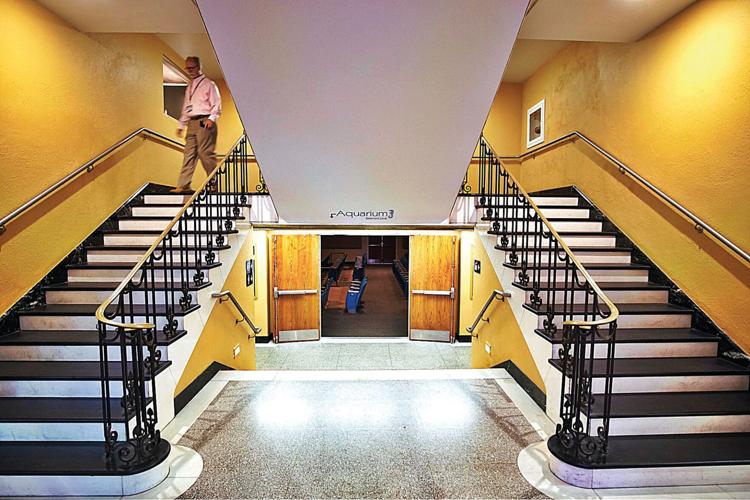 The Berkshire Museum lobby will be greatly expanded, opening into a two story atrium that will reconfigure the auditorium and the Crane room above. 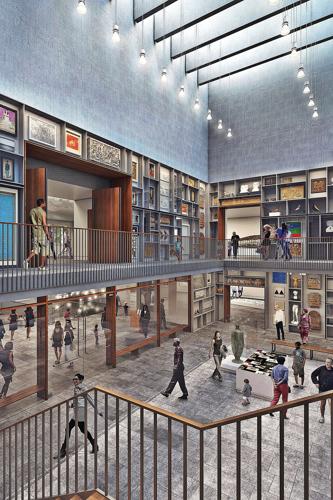 This is an image of the planned new atrium of the Berkshire Museum in Pittsfield, as envisioned by Arcade Architects. 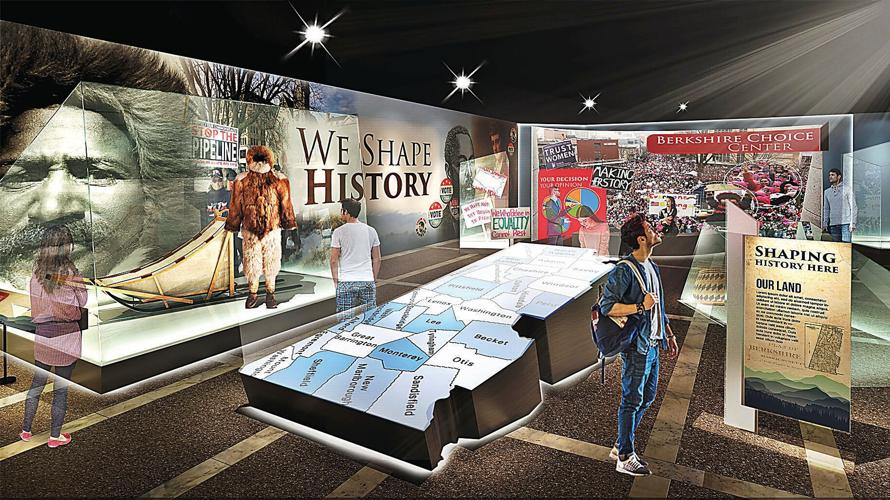 This image shows a rendering of one of the new exhibits, or experiences, planned in The Berkshire Museum. 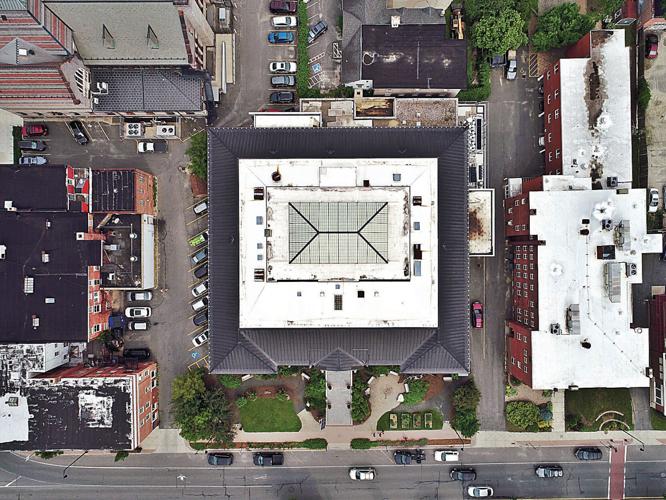 The Berkshire Museum in Pittsfield as seen from above with surrounding buildings. 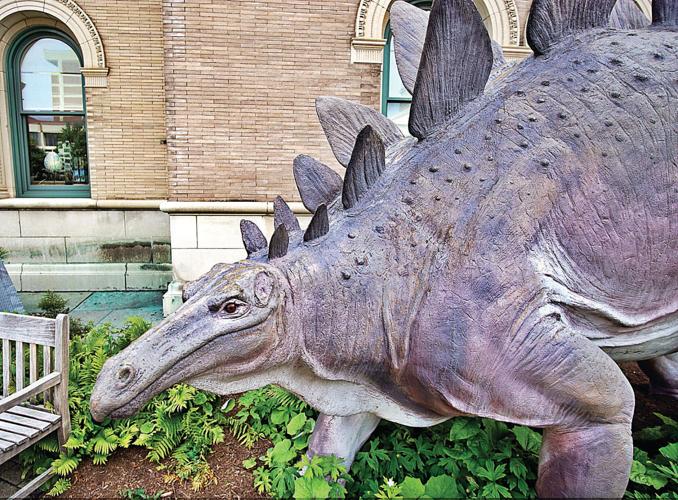 Wally the Stegosaurus stands in his habitat in the gardens outside the Berkshire Museum. Wally was the second stegosaurus statue created from a mold made by the Louis Paul Jonas Studios of Hudson, N.Y. In the new plan, Wally will be moved inside the museum.

The Berkshire Museum is on South Street in Pittsfield. It was founded in 1903 by Zenas Crane.

The Berkshire Museum lobby will be greatly expanded, opening into a two story atrium that will reconfigure the auditorium and the Crane room above.

This is an image of the planned new atrium of the Berkshire Museum in Pittsfield, as envisioned by Arcade Architects.

This image shows a rendering of one of the new exhibits, or experiences, planned in The Berkshire Museum.

The Berkshire Museum in Pittsfield as seen from above with surrounding buildings.

Wally the Stegosaurus stands in his habitat in the gardens outside the Berkshire Museum. Wally was the second stegosaurus statue created from a mold made by the Louis Paul Jonas Studios of Hudson, N.Y. In the new plan, Wally will be moved inside the museum.

PITTSFIELD — To stabilize its future, the Berkshire Museum must sell pieces of its past. Forty to be exact, including two paintings by famed American artist Norman Rockwell.

The move is part of a $60 million "reinvention plan" for the 114-year-old entity which includes the creation of at least a $40 million endowment and an extensive renovation of the South Street museum.

"I'm in this business to transform lives," he said. "It is not about what we have. It is about who are we for."

Redefining the museum — founded in 1903 with inspiration from the American Museum of Natural History, the Smithsonian and the Metropolitan Museum of Art — is the result of a two-year planning process, which took input from a variety of community members as well as staff and its board of trustees.

Shields said the museum will place a heightened emphasis on science and history and will be interdisciplinary in approach, designed to lend contemporary relevance to its historical artifacts.

Shields explained this will be accomplished by using a combination of cutting-edge technology and new interpretive techniques — such as allowing some of its objects to be handled by museum goers — that will transform its static galleries into "active teaching laboratories."

The museum will have five "zones" called Our Human Fabric, We Make and Create, We Shape History, We Perceive and Process, and Our Living World — its aquarium, which will showcase New England streams and ponds as well as environments worldwide.

An exhibit called the Curiosity Incubator, opened in February, has served as a 600-square-foot test ground for its new direction.

The incubator includes a series of interactive stations connected to its mummy and other museum objects. There are also virtual reality headsets and a photo booth.

"It is sneaky education," said Jennifer Glockner. "Kids are learning about history and genealogy but they don't know they are learning."

Glockner has worn three hats during the museum's process.

She is Pittsfield's director of cultural development, among the 13 people invited to be on the museum's Program Working Group and a mother of twin 8-year-old boys who are also museum members.

When her twins first saw the incubator, she said, they jumped from one area to another for over an hour. And they never asked to leave.

"That is a sign, in my opinion, of a really good thing," she said. "And imagine that multiplied to other exhibits throughout the museum."

Glockner said the changes on the horizon for the Berkshire Museum have it poised to become a destination on par with other cultural destinations in the region.

"Right now we drop in for an hour or two on a regular basis," she said. "But moving forward it will become more like the Clark or Mass MoCA where you can spend a day because of the level of the exhibits."

A timeline for the renovations has yet to be finalized, but the museum plans to auction the selected artwork within the next six months.

Shields said the auction, which will be run by Sotheby's, is expected to yield at least $50 million.

Rockwell's pieces have been known to fetch hefty sums at auction. For example, in December 2013, "Saying Grace," a Rockwell painting auctioned by Sotheby's, was purchased for a record $46,085,000 - more than double the $20 million high estimate placed on it.

The complete list of artwork, which includes Impressionist, Modern and Contemporary art, will be released by Sotheby's sometime prior to that, according to the museum.

The museum also launched a $10 million capital campaign, which includes a $2.5 million gift from the Feigenbaum Foundation, the largest single gift in the museum's history.

Capitalization has been an ongoing problem for the museum.

For the past 10 years, the annual structural deficit, including depreciation, has averaged approximately $1,150,000, Shields said.

That, coupled with competition from the region's myriad cultural institutions, prompted the need for significant adjustments.

"To survive, it is change, move, or die — we have to change," Shields said.

Board of trustees vote

The majority of the museum's 22-member Board of Trustees voted Wednesday morning in favor of plans for a new museum as well as the financial strategy to support it. The vote was 17 in favor and one abstention, with four members absent. The trustees followed the vote with a public announcement at the museum attended by invited guests.

The move marked the end of its two-year planning process, which museum leadership said included input from more than 400 community members, and the start of its implementation.

"It is a courageous thing to do and these decisions aren't taken lightly," said Doug Crane, a member of the museum's board of trustees and the great-great-nephew of founder Zenas. "With them being made it is time for us to step boldly forward."

"I felt it was an imperative to reset the museum in a way that would be sustainable," Crane said. "We have to face the realities that [the museum] doesn't get the level of support it needs to cover its operating costs."

The endowment will be established through the sale of about 40 works of art, including two Norman Rockwell paintings, "Shuffleton's Barbershop" and "Shaftsbury Blacksmith Shop." The artwork headed for the auction block was "not essential to the museum's refreshed mission," according to a statement from the museum.

The trustees considered approaching foundations or benefactors to establish an endowment but decided against that.

"The practical reality is that there is no one around who would do such a thing," Crane said. "The capability was within our grasp and our control."

Crane said the news marks a transformational moment for not only the museum, but for Pittsfield.

About half of its planned $20 million renovation is expected to be paid for through donations.

The museum's facade will remain intact as will its footprint — 60,000 square feet, Shields said.

A timetable for its renovation plans has yet to be determined. And museum leadership could not yet say if the entire museum would be closed to the public, or if parts of the building would remain open during the proposed changes.

Plans for the renovated building include a new lobby and an expanded aquarium that will be relocated to the museum's first floor.

That will help the museum reach a goal to display more pieces of its 40,000-object collection more often, Shields said. And several works currently on view — its Alexander Calder mobiles, glass installations by Tom Patti, its full-size wigwam, and even "Wally" the stegosaurus — will be relocated inside the museum.

The Feigenbaum Hall of Innovation, opened to much fanfare in 2008, will be eliminated and its elements will instead be distributed throughout the forthcoming zones.

Shields said the Feigenbaum Foundation is onboard with the idea and plans to sponsor "Feigenbaum Innovative Experiences."

Pittsfield architecture firm Arcade and Dalton-based Hill Engineers, Architects, Planners Inc. were tapped to develop its renovation plans. And its new exhibitions and other museum elements will be created in partnership with Boston-based Experience Design, which also helped with its master plan.

More than 400 local people, in addition to the museum's trustees and staff, participated in identifying regional needs that could be met by the museum and also acted as a sounding board for the ideas being developed.