Boasting about 1,500 square feet of usable space, Tyler Street Lab will host a kickoff party Saturday as part of an initiative nearly two years in the making to help build community in the Morningside neighborhood of Pittsfield. 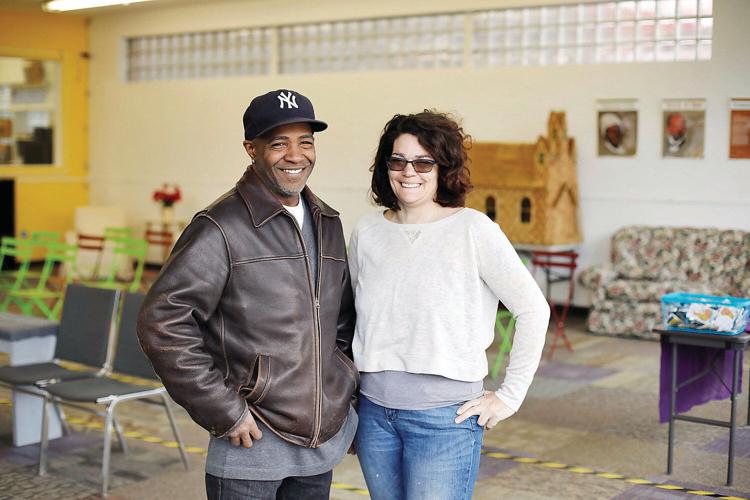 Boasting about 1,500 square feet of usable space, Tyler Street Lab will host a kickoff party Saturday as part of an initiative nearly two years in the making to help build community in the Morningside neighborhood of Pittsfield.

PITTSFIELD — Tyler Street is under development, and an emerging initiative aims to help residents grow alongside it.

Tyler Street Lab, newly furnished with a storefront at 730 Tyler St., reflects a collaboration between more than a dozen city organizations. Rooms in the back of the building provide office space for the groups, while a large room facing the street serves as a gathering space.

A launch party for the new hub kicks off Saturday at 1:30 p.m. The event features a drum circle led by Otha Day, and performances from Youth Alive, vocalist Chad Tarves, and Tom Truss and Jacob's Pillow.

The new hub boasts about 1,500 square feet of space and is nearly two years in the making. Goodwill Industries, the lab's fiscal agent, rents the space from Mill Town Capital, which owns the building. Seed funds for the project came from the Transformative Development Initiative under the state's development arm, MassDevelopment.

"The Tyler Street Lab is a win-win for local economic development," said Kelsey Schiller, a spokesperson for MassDevelopment. "It's activating a once-vacant storefront and creating space for community members to meet, share ideas, and together build the future of Tyler Street."

The TDI grant provided $7,250 for initial design and materials, and $10,000 to help sustain the space through June. Schiller said the funds are intended to support those working to lift up the community.

Nonprofits using offices in the lab pay $100 a month, plus a $35 fee for Wi-Fi, which feeds an account that will be put toward future expenses, according to Fran Zarubick, chief of staff for Goodwill Industries of the Berkshires and Southern Vermont.

Zarubick works as the lab's administrative director, mentoring collaborators as they learn how to fundraise and become self-sustaining. She said the "pop-up" space is a place for residents to gather for workshops, and to pick up skills they need to grow their ideas.

"This opportunity for Pittsfield is huge," she said.

Plus, it's just a nice place to hang out, and its wall-sized front windows lure in passersby.

Kate Lauzon, chair of the Morningside Neighborhood Initiative and a lead collaborator at the lab, called the hub "one-stop shopping" for involved members of the community.

Other collaborators include Rose and Cole's Co-Op Transport, Roots and Dreams and Mustard Seeds, the NAACP Berkshire County Branch, and Manos Unidas.

"We want to mirror our community in Morningside and make sure we've got something for all walks of life," Lauzon said.

Eventually, she said the group is looking to form a large nonprofit around the lab, called Tyler Street Collaborative.

Terry Moore, operations director for Rose and Cole's — a nonprofit transportation service that with an office in the new space — is also playing a lead role in the initiative. He said he envisions the space as "an incubator," a place where people with ideas can find a platform.

Various groups in Morningside are already working to solve the same problems, Lauzon said, and so they might as well work together under one roof. There, they can jointly offer programming that helps "make a person whole."

She and Moore said they'd like to host things like cooking classes and automotive repair workshops at the lab.

"It's like an onion that peels," Lauzon said. "There's so many layers to helping people who are in poverty."

It will double as event space and meeting space for the Morningside neighborhood. They also hope to kick-start important conversations around pressing, sensitive topics that sometimes get buried.

Mostly, they said, it's a place to figure things out and grow together as a community.

"Bring your ideas on down to the center," Moore said.

The former Lach’s Lounge, at 117-129 Fenn St. in Pittsfield, is taking on a new life as a community gathering space. Nancy Gómez says O.U.R. Resurge, as the center is called, offers “something that the immigrant community has been waiting for and dreaming about for a very long time."