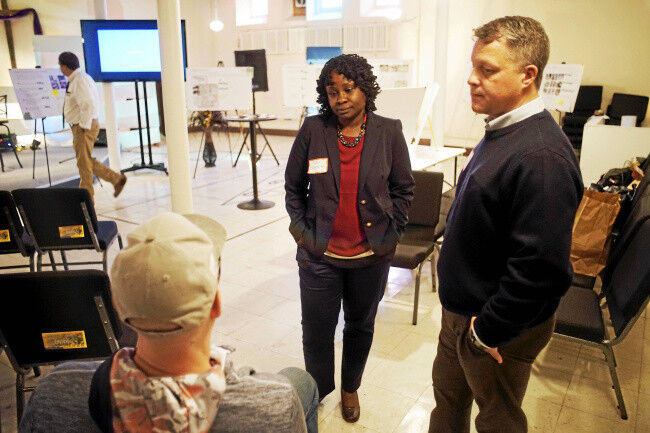 Amewusika "Sika" Sedzro, a MassDevelopment Transformative Initiative Fellow, talks with a resident during an open house on revitalizing Tyler Street in Pittsfield at the Dream Center in the Morningside Baptist Church. Sedzro is one of six fellows in gateway communities laying the groundwork for economic development in those communities. 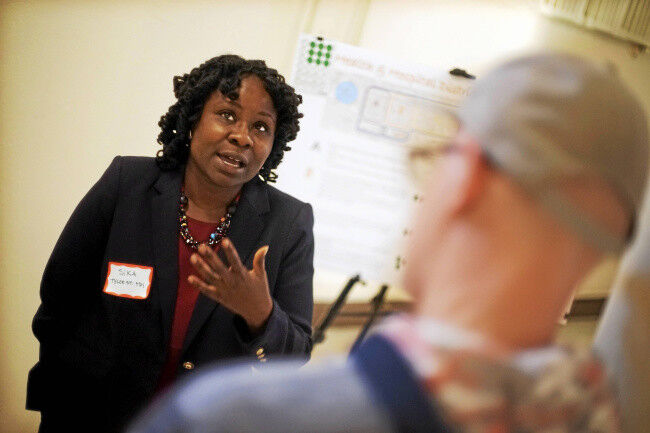 Amewusika "Sika" Sedzro, a MassDevelopment Transformative Initiative Fellow, talks with a resident during an open house on revitalizing Tyler Street in Pittsfield.

Amewusika "Sika" Sedzro, a MassDevelopment Transformative Initiative Fellow, talks with a resident during an open house on revitalizing Tyler Street in Pittsfield at the Dream Center in the Morningside Baptist Church. Sedzro is one of six fellows in gateway communities laying the groundwork for economic development in those communities.

Amewusika "Sika" Sedzro, a MassDevelopment Transformative Initiative Fellow, talks with a resident during an open house on revitalizing Tyler Street in Pittsfield.

That's the not-cast-in-stone conclusion from planners with the Tyler Street Transformative Development Initiative, or TDI, created late last summer to help boost the area's economy and improve the residents quality of life.

During an all-day open house at Morningside Baptist Church, the TDI's leading planner, Amewusika "Sika" Sedzro and Lisa Nagle of Elan Planning, Design and Landscape Architecture of Saratoga Springs, N.Y., outlined the vision for revitalizing the mixed residential/commercial area that stretches from just beyond Berkshire Medical Center to Woodlawn Avenue.

The proposal breaks up the TDI in six areas of interest:

• Health and specialized housing and midtown residential, both on the far western side of the district;

• Food/agriculture/education on the southerly side;

• Commercial/retail and Food/entertainment along Tyler Street;

• Residential on eastern half and just north and south of Tyler Street.

TDI planners said the vision grew out of public input from earlier in the year and the current makeup of the area. They want more feedback for any proposal is finalized in the coming months.

"These are just ideas," Nagle said. "We want people to give us a thumbs up or thumbs down."

"If you have a strong opinion about these things tell us now," said Diane Marcella, president of the Tyler Street Business Group.

The poster boards that were on display detailing the possible master plan for Tyler Street will be placed within the TDI at yet to be determined locations, city officials said.

MassDevelopment, the state's finance and development agency, designated Pittsfield a TDI community in August 2016 to help stimulate growth in the Tyler Street area. In April the agency hired Sedzro to lead the TDI over the next three years in planning and implementing ways to bring in new business, increasing housing opportunities and allow for some creativity.

Other goals include finding ways to better link the neighborhood to the downtown, BMC, Springside Park and the William Stanley Business Park.

The city and state hope to build on recent individual redevelopment in the Morningside area, such as the opening four years ago of the Silk Mill Apartments, the conversion of a century-old factory into affordable housing and the ongoing search for tenants to the William Stanley Business Park that could include a Walmart Supercenter.

TDI planners said the goal is to let the private sector dictate how the area grows economically as there are no property-takings involved. They noted any zoning changes would have to come from the city to meet the desired economic development for the TDI district.

As for Morningside residents, the final TDI plan looks to increase home ownership.

"The goal is 65 percent home ownership and we are way below that [in the TDI]," Nagle said.

Residents are also concerned about living in a safer, more accessible neighborhood, according to Ward 2 Councilor Kevin Morandi.

"They want better sidewalks and lighting. Lighting was a top priority," he said. "People are really excited about what can be done here."

"We're trying to activate some vacant storefronts with holiday pop-up markets ... to see what will work here," Sedzro said.

Drafts of the TDI master plan are available at courbanize.com/projects/pittsfield-tdi.