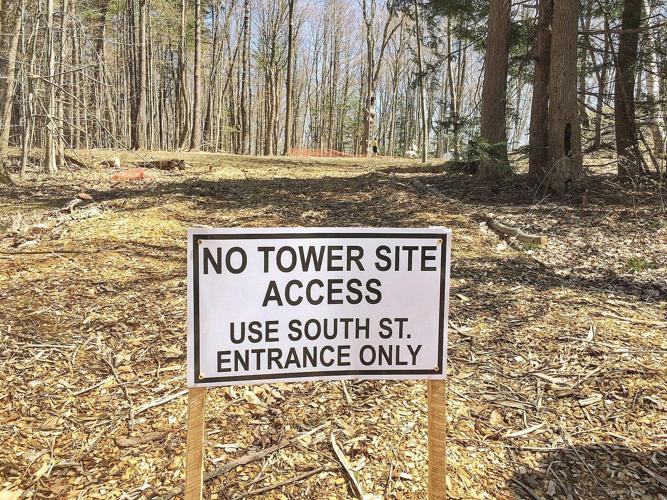 The city of Pittsfield closed access to the cell tower construction site at the top of Alma Street after neighbors complained of heavy truck traffic. 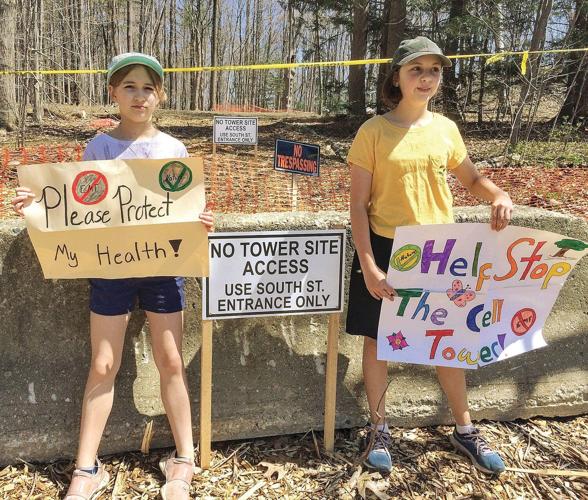 Jocelyn Coco Gilardi, left, and her sister, Amelia, pose at the top of Alma Street near the project site with signs they created. Their mother, Courtney Gilardi, has led neighborhood opposition. 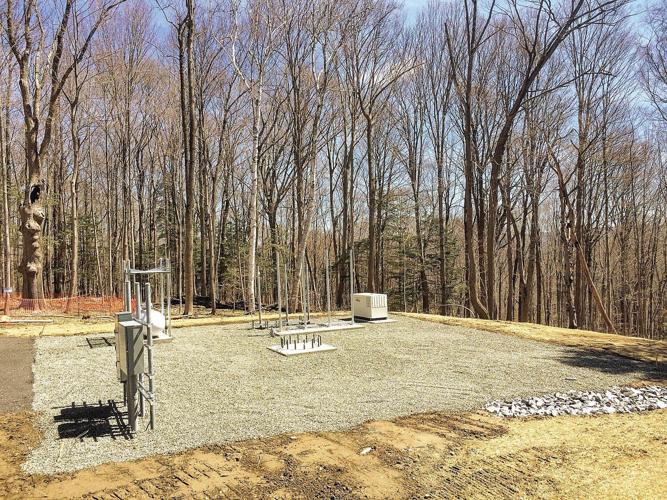 A pad and some electrical equipment is already in place for the cell tower, to be built as part of the Verizon Wireless network. 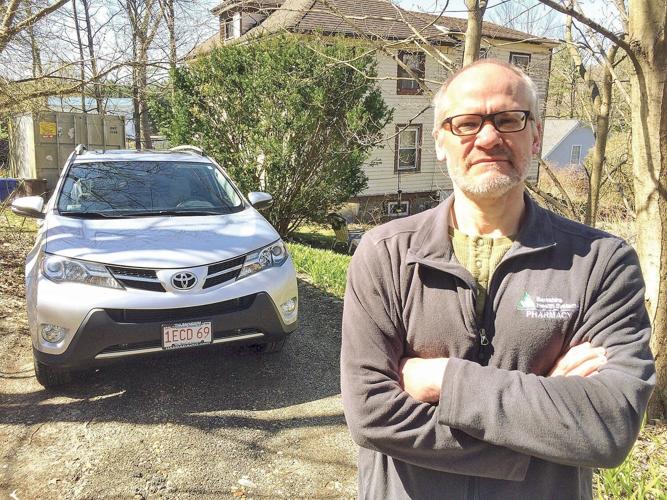 Dennis Desnoyers opposes the cell tower project and is upset the city of Pittsfield approved it. "Without any thought of maybe there's harm coming to us, and our property values," he said.

The city of Pittsfield closed access to the cell tower construction site at the top of Alma Street after neighbors complained of heavy truck traffic.

Jocelyn Coco Gilardi, left, and her sister, Amelia, pose at the top of Alma Street near the project site with signs they created. Their mother, Courtney Gilardi, has led neighborhood opposition.

A pad and some electrical equipment is already in place for the cell tower, to be built as part of the Verizon Wireless network.

Dennis Desnoyers opposes the cell tower project and is upset the city of Pittsfield approved it. "Without any thought of maybe there's harm coming to us, and our property values," he said.

PITTSFIELD — From their side of the mountain, up on Alma, Fairhaven and Ora streets, the commercial hubbub to the west on Route 7 seems far off.

But, as neighbors discovered this spring, what "goes around" over there — at 877 South St., for instance — can come around.

Unless halted by a Berkshire Superior Court judge after legal arguments Thursday, a Verizon Wireless cellular telephone tower is about to rise on a newly prepared clearing at the top of Alma Street. It will be visible throughout south Pittsfield.

For neighbors, it started, roughly, with the advent of the coronavirus. That's when an "army" of construction vehicles (as their lawyer put it Thursday) came snaking up Plumb Street in mid-March and made the sharp right onto Alma Street. One of them was so heavy that it broke a water main and shut that little corner for the day.

Neighbors like Charles Herzig and Dennis Desnoyers got over that mishap. The city later banned construction access to the tower from Alma Street, sending crews instead up the long driveway at 877 South St.

But, the two men and a determined band of residents of "Shack Town," as these streets have been known for generations, are fighting to have the city take it from the top, so to speak.

As many as 14 neighbors signed affidavits claiming that they never received proper notice, in 2017, that the city's Zoning Board of Appeals would hold a hearing on a special permit needed to construct the tower. They also say they were not told the tower had gotten the green light, in a unanimous vote, and for that reason missed the chance to appeal. They want a do-over.

Twelve of them on April 17 sued the city, the property owner and Verizon Wireless. They want a judge to stop construction and direct that the process be restarted.

Jeffrey Scrimo, their attorney, told Judge Maureen Hogan on Thursday that another six residents of the area also say they received no notice. By Scrimo's calculations, 60 percent of abutters to the project were not told of a crucial hearing in 2017.

Scrimo argues that the notice really only came when trucks rolled.

An attorney for the city, Buffy D. Lord, argued during Thursday's telephone conference with Hogan that Pittsfield provided proper notice to abutters. "The city has fulfilled its requirement," she said. "All that need occur is that the notice be mailed."

Officials with the city's Department of Community Development feel the same way.

Deanna Ruffer, the office's director, declined to comment on the case, citing the litigation. But, in emails to neighbors, Ruffer and City Planner Cornelius J. Hoss say the city mailed notices to people who own property within 300 feet of the parcel, as required. The city has demonstrated that it followed other procedures, including posting a notice in City Hall and publishing a legal ad.

Ruffer declined to say whether the city can prove it provided written notice to abutters.

Christopher Connell, the Ward 4 city councilor, said he is in favor of giving residents a chance to comment at another hearing.

"I would like to revisit the whole thing," he said. "There seems to be discrepancy as far as who was actually notified."

And like neighbors, Connell believes that identifying the tower project only in connection with the 877 South St. address contributed to confusion when, in fact, the residential property owners most affected live in Shack Town, at the far eastern edge of the parcel.

"I didn't give it a second thought because of the address," Connell said. "That's where I have a problem."

Dan Bouvier, who lives in the neighborhood, estimates that the tower will stand 1,500 feet from South Street.

"A reasonable person wouldn't say that's the address," he said. "But, they're doing a project that's 100 feet from a residential neighborhood."

That's a point his spouse seconds, during a visit to Alma Street.

"There's clearly been deception," said Tricia Farley-Bouvier, the state representative. "Once it's been reversed, we'll have an opportunity to plead our case. It doesn't feel like we were well-represented in this process."

Just one resident, Lewis Schiller, of Lori Court, turned up for the 2017 hearing. In a letter to the editor of The Eagle, Schiller, a retired engineer, expressed support for the project. In their own letters, and in interviews in the neighborhood, residents say they believe the tower will change the aesthetics of the area, reduce their property values and pose health risks.

"People do have concerns and questions," said Courtney Gilardi, an Alma Street resident who has organized neighborhood opposition. "They believe a tower would be a blight on the neighborhood. If any one of us had known about the cellphone tower we would have been at those meetings."

"For a tower with this impact, we received nothing," she said. "It's heart-wrenching. For the first two weeks, I cried every night."

Desnoyers, a pharmacist at Berkshire Medical Center, lives in the house he grew up in. He faults the city for approving the tower "without any thought of maybe there's harm coming to us, and our property values."

Herzig, his immediate neighbor at 140 Plumb St., believes use of the 877 South St. address was intended to mislead.

"I'd like to know why the thing was snuck through without anybody knowing," he said in an interview at his property. "That seems a little funny. The whole thing stunk. It was like they were trying to sneak something by us."

In a March 20 email to Gilardi, Ruffer said the city satisfied state law on notification.

"All legal requirements were met," she wrote. The same day, Hoss suggested to Gilardi that neighbors talk with a lawyer.

Filings by Verizon Wireless say the tower, powered by a diesel generator, would have little impact on neighbors.

On Alma Street, Paul and Diana Dalton live closest to the project site with their two daughters. They say they learned of the tower while out walking in nearby woods. Neighbors started to make calls, frantic to know what was afoot.

"None of the local officials that we talked to had any idea what was going on either," Paul Dalton said. "That started to set off alarm bells."

Dalton said neighbors were shortchanged by not getting a chance to understand the pitch for and against the tower. "And to have a voice is saying whether that's how they want to see their neighborhood go forward," he said.

"It's kind of alarming that there was no opportunity for the community to provide a voice," he said.

Diana Dalton said she moved from Brooklyn years ago in search of a quiet neighborhood — and found it. Now, she feels the tower could tip the balance. She also is concerned about the well-being of her children, as well as the couple's property value.

"How are we going to be able to sell our home, if we wanted to, with an eyesore like that right next door?" she asked.

Like the Daltons, Elaine Ireland, a neighbor, came for the quiet.

"I chose this property because it's off the beaten path and secluded," she said from her yard. "It came as a real surprise."

One street over, Mark Markham remembers other debates about use of land on the nearby hilltop. Once it was a condo proposal. Then a proposed hospice.

"I don't remember getting a cell tower letter," he said. Markham gestured up over his roofline, past a water tower.

"If you look straight over the top of the house, that's where they're putting it," he said.

Two houses down Elmer Street, William Coe, a carpenter, has been fixing the house he bought two decades ago. He is a plaintiff in the case. "It's just so quiet up here. You'd hate to take anything away from it."

Just down the hill, Leanne Muir was getting ready to go to work, her two children at play in the yard. She moved to the neighborhood two years ago, not knowing the tower had been approved.

"We found our dream home. And it's a scary thought with kids growing up near it," Muir said of the tower.

The family with perhaps the biggest footprint in Shack Town is the Scago clan on Fairhaven Street — matriarch Judy, her son, Frank, and daughter-in-law, Jessica. Plus, assorted young ones. The family lives in two houses and owns a third, at Plumb and Fairhaven streets.

Jessica Scago says she will press to move, if the tower rises, out of concern about possible health effects of the tower's electronic gear.

"They claim that letters were sent, but nobody we've talked to remembers getting any," Frank Scago said. "If you turn around and have your property devalued, it leaves a bad taste in your mouth."

After 40 years here, Judy Scago says it comes as a shock to learn a tower might go up beside her residential neighborhood.

"It's very disconcerting to have to deal with that," she said. "To have to think that my family would move because of this is a very upsetting scenario. I'd like to see my grandson grow up in a neighborhood like this."

It isn't known when Hogan will rule on the neighbors' request for an injunction.