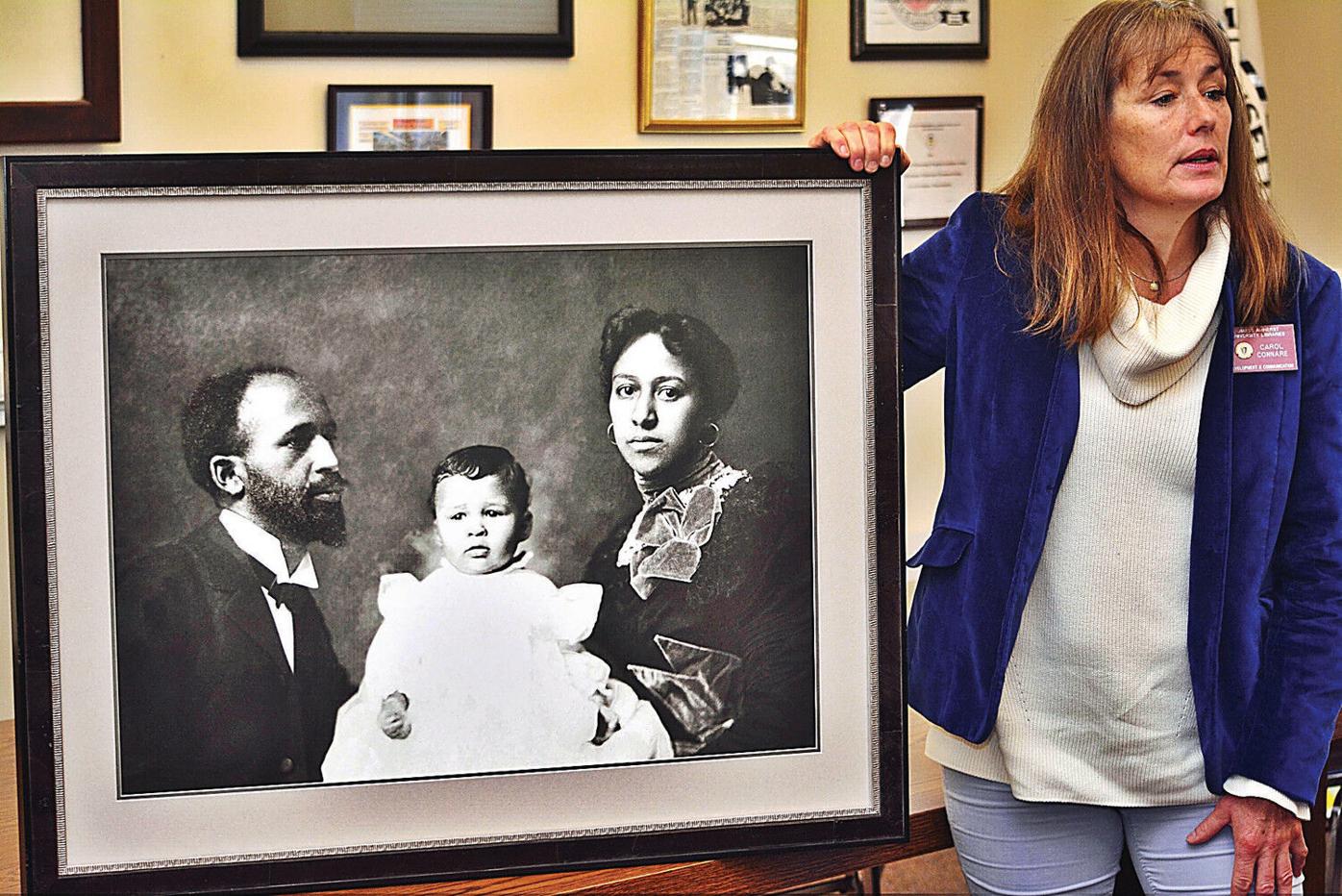 Carol Connare, communication director of the University of Massachusetts Amherst Libraries, discusses Tuesday the donation of a photo of William Edward Burghardt Du Bois, his wife, Nina, and their son, Burghardt, to Town Hall in Great Barrington. A large photo of the scholar, sociologist and civil rights leader, taken around 1898, will hang permanently on a prominent wall in the stairwell. 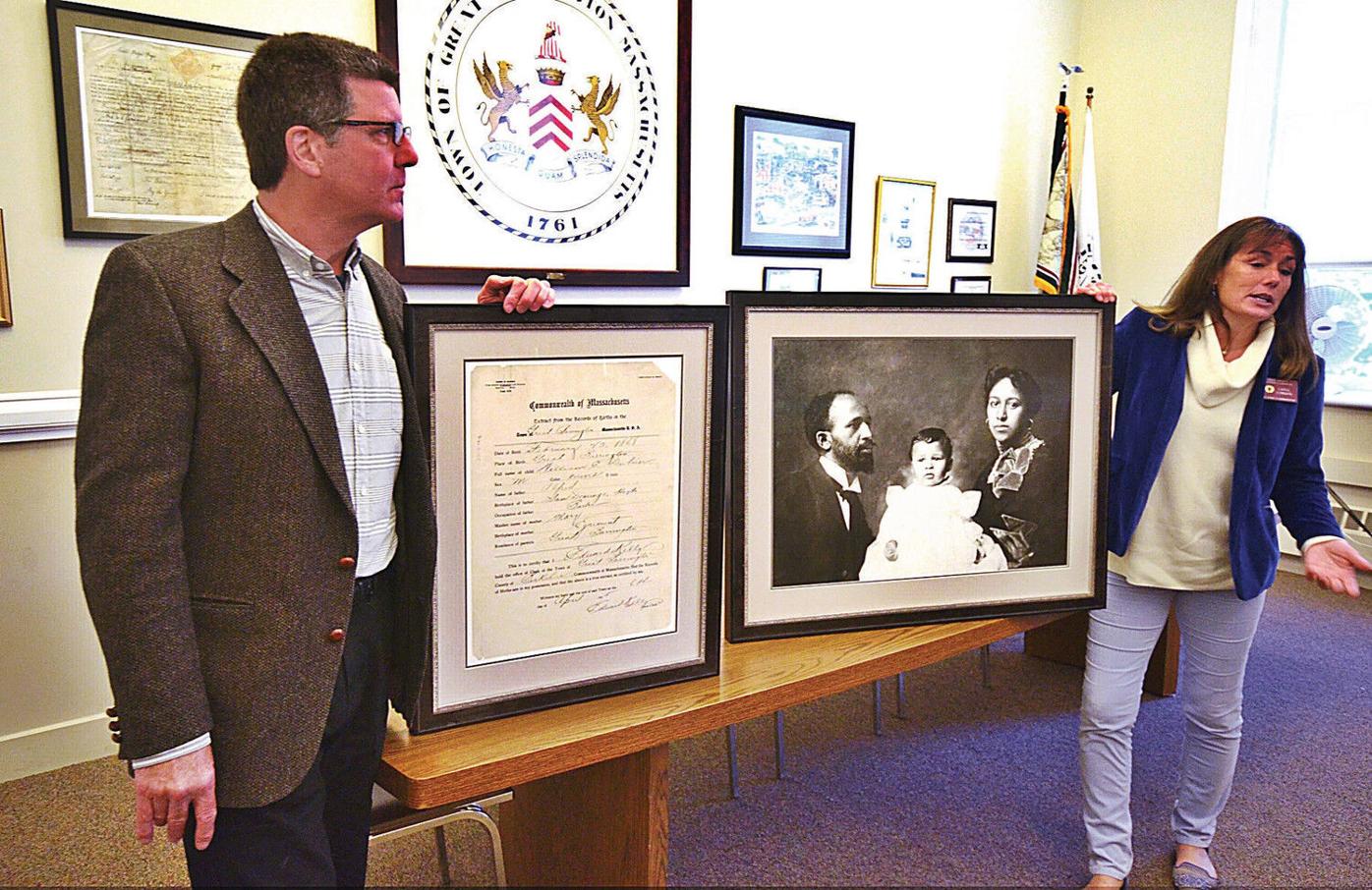 Carol Connare, communication director of the University of Massachusetts Amherst Libraries, discusses Tuesday the donation of a photo of William Edward Burghardt Du Bois, his wife, Nina, and their son, Burghardt, to Town Hall in Great Barrington. A large photo of the scholar, sociologist and civil rights leader, taken around 1898, will hang permanently on a prominent wall in the stairwell.

GREAT BARRINGTON — Almost 150 years after his birth here, William Edward Burghardt Du Bois is about to get what people say are his long-overdue props around town. And many more are on the way.

The first stop in this effort was Town Hall on Tuesday. And it began with a large photo of W.E.B. Du Bois, with wife and son, who died at 2 years old of diphtheria because he was black and white doctors in Atlanta refused to treat him.

A large photo of the young African-American scholar, sociologist and civil rights leader, taken around 1898, will hang permanently on a prominent wall in the stairwell. And a large framed copy of his birth certificate might have a spot on a wall in the meeting room.

"This is the first evidence [of Du Bois] in Town Hall," said Select Board member Ed Abrahams, who accepted the two pieces from Carol Connare, communication director of the University of Massachusetts Libraries. Randy Weinstein, director of the Du Bois Center in Great Barrington, helped arrange for the donation.

"It's a special day," Connare said.

The center was founded in 2009, devoted to Du Bois scholarship and national and global issues around race, labor and social justice.

"We take the legacy of Du Bois very seriously," she said. "We're already beginning to honor him with new programs at UMass."

There are some efforts afoot in Great Barrington, too. Last year, a Du Bois lecture series was started at Monument Mountain Regional High School, and a UMass program is in the works to train Monument students to be docents at the Du Bois home site on Route 23.

Monument High has also injected a good dose of Du Bois into its curriculum. Many a teenager has been seen with a dog-eared copy of his seminal book, "The Souls of Black Folks," spilling out of a backpack.

"There's no better time to be returning to his writing and his thinking," Connare said of Du Bois' provocative ideas about the most difficult social issues, especially race. "Everyone has the challenge inside us. He challenges our thinking."

Du Bois, also a co-founder of the NAACP, was considered pivotal to the nation's political debates over race and class. He often took heat for his radical thinking. Connare said that that thinking of his had evolved over time.

She said a crushed dream to rebuild his childhood home in Great Barrington, combined with the public lashing over his embrace of communism late in life, led to his departure to Ghana in 1953, where he died while editing Encyclopedia Africana.

Du Bois' home site is just down the road. The Du Bois Center sits next to the Mahaiwe Cemetery, where some of Du Bois' family members are buried. And signs at either end of town announce his birthplace.

But now the party really begins, with a series of activities and events — still in the works—beginning Jan. 15 in the lead-up to his Feb. 23 birthday.

"We've got a lot of people working toward one end here," Weinstein said.

Indeed, numerous people and groups, including a town committee, the Great Barrington Historical Society and Multicultural BRIDGE, are organizing events.

Weinstein said there will also be classes on Du Bois at the Osher Lifelong Learning Institute at the town's Berkshire Community College satellite. The classes, he said, will explore Du Bois "as a whole."

"We're not going to run from the controversial," he said. "We're going to try to have some fun with this and try to understand him a little."

Abrahams said it's about time for this town to try to understand and recognize him.

"It's a slow start to acknowledge one of the best things we've produced," he said. "Everywhere else in the world, this is a very famous person — except here. Better late than never."