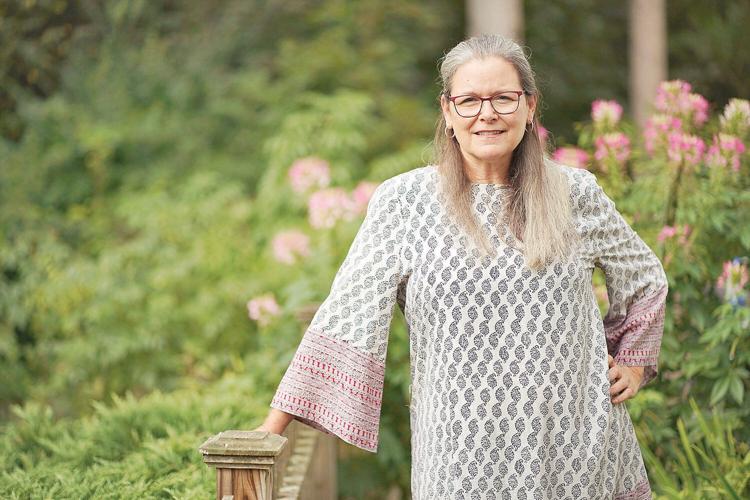 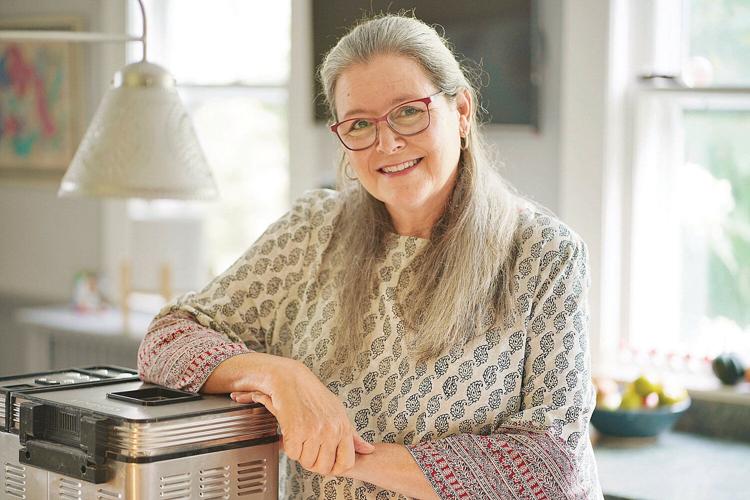 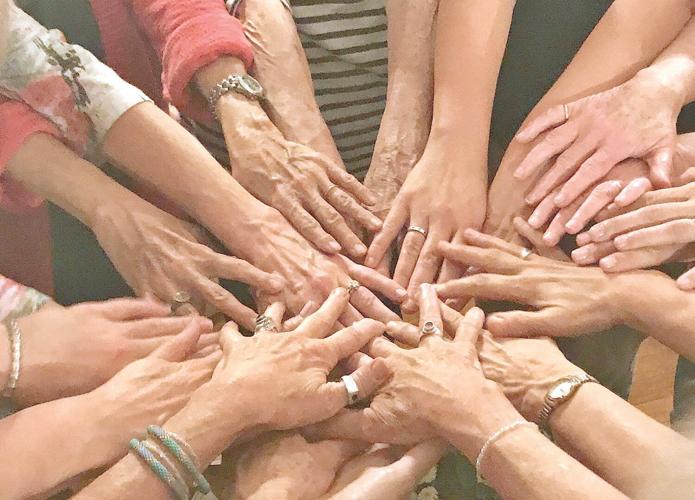 Women participating in a Walking Our Talk circle put their hands together. Participants say the women's circles have helped them accomplish goals, feel the support of other women and simply make friends. 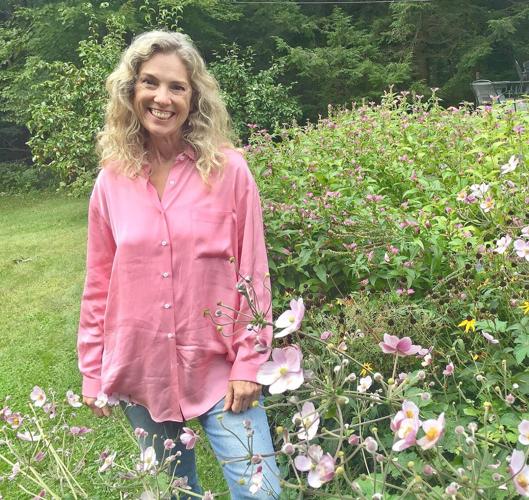 Mary Campbell, executive director of Walking Our Talk, in her Great Barrington garden. In 2006, Campbell started a circle in her home, looking for support. The circle has grown into a program with multiple women's circles running at once in Great Barrington and Pittsfield.

Women participating in a Walking Our Talk circle put their hands together. Participants say the women's circles have helped them accomplish goals, feel the support of other women and simply make friends.

Mary Campbell, executive director of Walking Our Talk, in her Great Barrington garden. In 2006, Campbell started a circle in her home, looking for support. The circle has grown into a program with multiple women's circles running at once in Great Barrington and Pittsfield.

GREAT BARRINGTON — When Julia Kaplan entered a Walking Our Talk circle, she had just been diagnosed with Type 2 diabetes.

About two months later, after an eight-week session in the women's circle, a blood test showed that Kaplan, 59, had kicked it — the natural way.

"I made it my project to reverse it without medication," Kaplan said. "I changed my diet, upped my exercising, and lost quite a bit of weight through the support of my sisters sitting in circle every week."

Kaplan, a photographer and philanthropist who lives in Pittsfield, said she has continued doing circle sessions and is about to start another. She said that Walking Our Talk, which began in a Great Barrington living room in 2006, has moved women in the Berkshire County region toward their goals and has created sisterly bonds and support that also yield meal trains, babysitting and other supports for the complicated lives of modern women.

"I never have to worry that I'm alone, even though I live here alone and I have no family," Kaplan said.

The laundry list of businesses, works of art, health problem reversals and relationship support is long and peppers the Berkshires with actual results of seeing a desire through, or lives simply changed by, the support of other women of varied lives, ages and experience.

"One woman made her website — one woman made her brochure," said Mary Campbell, an interfaith minister and relationship counselorwho co-founded the group with life coach Maia Conty during her own quest to find her way into new pursuits after years as a choral director while raising three children.

"It's like getting support to get off your duff and do that thing you were going to do," said Campbell, now the group's executive director. "But some women could care less about the project — they come for community."

Walking Our Talk is filing for nonprofit status so it can deal with what has grown into a lot of time and effort for volunteers, and so that it can expand scholarships for the $200-per-session cost, since the circles turn away no one.

Nearly 300 women have participated, and the circles have moved into Pittsfield. Two new circles will start in both towns in late September.

In Great Barrington, the group meets at Sruti Yoga Center, whose founder created it with support from the circle; in Pittsfield, circles meet at the Unitarian Universalist Church. All of this can be found on the group's website: walkingourtalk.org.

Campbell, 60, said circles usually have about 10 to 14 women in multiple sessions in Great Barrington and Pittsfield, and each week, the women switch "buddies" with whom they meet weekly to talk about their project. Two trained facilitators are present at the circles to keep the structure and help the group adhere to guidelines.

"Not to give advice without permission, confidentiality, [and] to see each woman at her highest, to step away from comparison, criticism," Campbell said. "We don't allow cross-talk. It's not this freewheeling thing where somebody can talk for 20 minutes and you feel like you're not going to get your chance."

This is also not your grandmother's sewing circle or your mother's coffee klatch: "Gossip is one of the big things that we do not allow at all — this is not about pushing another woman out of the way to feel better."

It appears that women aren't used to a culture of female support.

"One of the biggest transformative experiences of sitting in circle is the feeling that people have your back," Campbell said.

Campbell said circle culture is rising everywhere along with the rise in a modern embracing of the "divine feminine," and its qualities of compassion, nurturing, sensuality and intuition.

It's also rising, she said, because of a modern turn away from religious community, as Carla Oleska, the former CEO of the Women's Fund of Western Massachusetts, had once told her.

"She said, 'You're the new church, because you create a system of support, and you invite people to go more deeply,'" Campbell said.

The key to breakthrough, Campbell said, is learning to crack oneself open around others.

"Vulnerability is hard, but then you realize that it's your ticket," she said. "People start out being really afraid to share, and not wanting to show that they don't have it all together. And by the end, you're falling apart."

This falling apart in order to pull it together can be about cleaning your closet, since that could keep you from "lofty" things, Campbell said. Or cleaning out a less-than-optimal professional self-regard, as it did for actor and playwright Anne Undeland.

"It really helped me kind of take myself seriously as a theater artist," Undeland said. "And once I did that, I found things started happening — I started playwriting, continued acting and wound up in some interesting productions."

In May, her work, "The Kiss," won best play at a festival at the West Side YMCA in New York City. Undeland also is working on other plays, one of which she is submitting to festivals. She also is involved in two playwriting groups.

She thinks Walking Our Talk might have made for a quicker journey into her true life's work.

"It reframed the way I looked at the world, and looked at possibilities, and put myself out there to be reckoned with," she said. "I'm profoundly grateful."

Kaplan is so grateful that she wants the group to keep raising money so the circles are available to all women, from all walks.

Undeland said the circle, or anything that can bring a person to their full expression, is worth trying.

"Whatever it takes to get you on a path in your life that is fulfilling, that makes you feel like you are doing at least something of what you were put on this planet to do," she said.

Though now, Undeland has found that she is too busy — happily busy — for the circle.

"I'm doing so many other things that are things I want to be doing," she said.