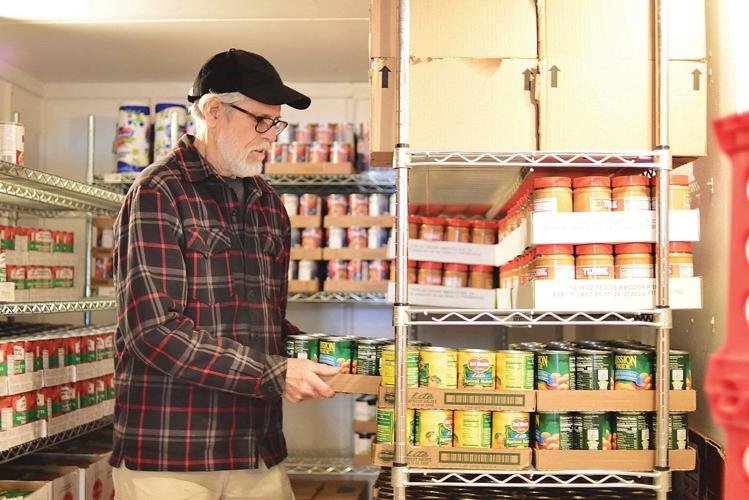 Rich Davis stocks the shelves at The Friendship Center of Northern Berkshire, a food pantry at 45 Eagle Street in North Adams on Friday, November 15, 2019. 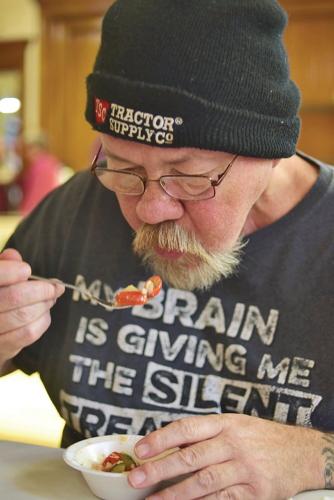 Robert Harrington eats a meal a the Berkshire Food Project at the First Congregational Church in North Adams on Friday, November 15, 2019. 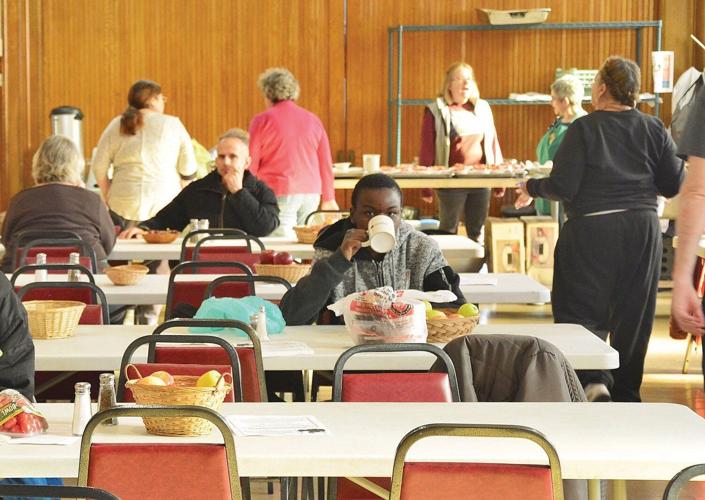 People eat a hot meal at the Berkshire Food Project at the First Congregational Church in North Adams on Friday, November 15, 2019. 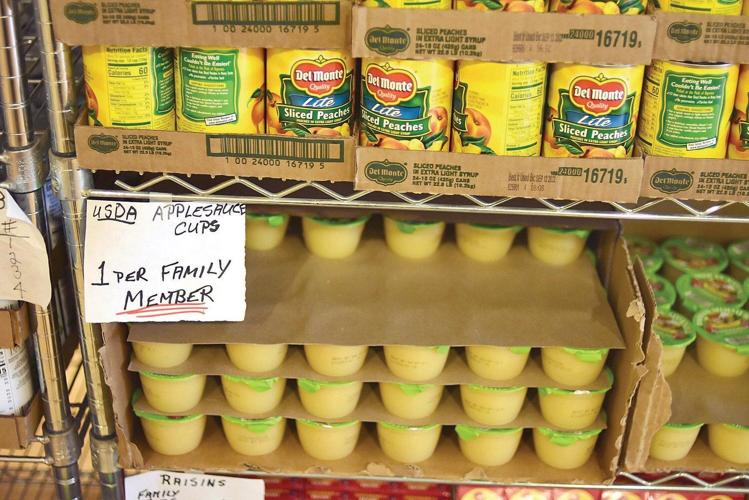 Some of the stocked shelves at The Friendship Center of Northern Berkshire, a food pantry at 45 Eagle Street in North Adams on Friday, November 15, 2019. 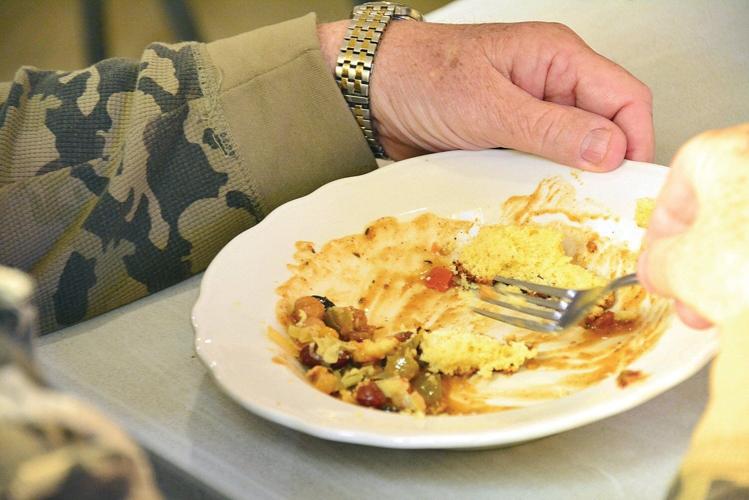 Chili and cornbread was the hot meal served at the Berkshire Food Project at the First Congregational Church in North Adams on Friday, November 15, 2019.

Rich Davis stocks the shelves at The Friendship Center of Northern Berkshire, a food pantry at 45 Eagle Street in North Adams on Friday, November 15, 2019.

Robert Harrington eats a meal a the Berkshire Food Project at the First Congregational Church in North Adams on Friday, November 15, 2019.

People eat a hot meal at the Berkshire Food Project at the First Congregational Church in North Adams on Friday, November 15, 2019.

Some of the stocked shelves at The Friendship Center of Northern Berkshire, a food pantry at 45 Eagle Street in North Adams on Friday, November 15, 2019.

Chili and cornbread was the hot meal served at the Berkshire Food Project at the First Congregational Church in North Adams on Friday, November 15, 2019.

NORTH ADAMS — With the help of new funding, research and some new initiatives, Northern Berkshire food security and access advocates are expanding their fight against hunger.

"People are hungry all year," said Berkshire Food Project Executive Director Kim McMann. It's a constant refrain that she and other food access advocates use in their line of work.

In the organizations' end-of-the-year appeal letters, both Berkshire Food Project and the Al Nelson Friendship Center Food Pantry describe to donors an increasing demand for food, as well as other essentials and services.

McMann and her board members write: "The surge in diners has surprised and, frankly, challenged us. We always serve more people late in the month, but we have never seen anything like this. In July and August, on each of the last ten days we served over 100 meals (182 on July 30) as compared to a typical count of 80. This was apparently not due to the school year: in September, only on one day did we serve fewer than 100. We are on track to serve 20 percent more meals in 2019 than in 2018."

The Friendship Center Board of Directors states in its appeal: "With the economy slowing a bit and the possibility of more restrictive rules for the Supplemental Nutritional Assistance Program (Food Stamps) soon going into effect — we fear the number of people in need in our community may increase significantly."

The center, located on Eagle Street, already gathers and distributes some 5,000 pounds of food to area residents each week, with support from the Food Bank of Western Massachusetts and various donations from individuals, businesses and networks in the Berkshires. Asked why she thinks the number of people seeking food is increasing, McMann said, "There are as many barriers as there are people," meaning that every person who walks in for lunch has unique reasons. And not everyone who comes through the door looks down and out.

"Most people experiencing hunger in the community are people you know, people around you, people who have jobs. They're keeping appearances up, but they may still struggle to make ends meet," McMann said.

"A lot of working people are not getting paid what they need to get paid, and even if they get a raise, it's like 25 cents," she said.

Research indicates that hunger-related matters have a wide, complex range of causes and adverse outcomes. Hunger is not just about not having enough food to eat, but also relates to having access to a means of getting and storing food, and also having access to food that has nutritional and other health benefits.

Two years ago, leaders of Be Well Berkshires, an initiative of the statewide Mass in Motion movement to promote active and healthy living, conducted a countywide community food assessment to identify barriers many Berkshire residents face in accessing healthy and affordable food. That project spurred several geographically specific focus groups, including the Northern Berkshire Food Access Collaborative, which meets quarterly.

On Nov. 12, during the state's inaugural Hunger to Health Summit at the Boston Museum of Science, Northern Berkshire Community Coalition was named as one of six recipients of a "Mobilizing Health Care for a Hunger Free Massachusetts" grant, to help support the work of the Northern Berkshire Food Access Collaborative. The $5,000 award is designed to help the group explore ways to reduce the health consequences of hunger, which range from malnutrition to mental illness.

A study published by The Greater Boston Food Bank and Children's HealthWatch estimated that health care, special education and lost work time costs attributable to adverse health conditions caused by food insecurity — like Type 2 diabetes in adults and iron-deficiency anemia in children — to be $2.4 billion in Massachusetts based on data from 2016.

"Food is a conduit to mental health. What you eat can make or break your mental health, which is why it's important for us to help connect people to healthy food," she said.

Chilson said Northern Berkshire Food Access Collaborative, which has some 200 stakeholders on its email list, is looking to prioritize how to address needs driving hunger in the region. That means bringing a range of folks to the table to get on the same page, from farmers to dieticians, landlords to bus drivers.

"The housing, transportation and clinical worlds are all part of the food system, even though we might not be thinking they are," she said.

From table to action

At its Dec. 10, meeting, scheduled for 10 a.m. at The Green, 85 Main St. in North Adams, participants will hear about how people and agencies can receive loans, grants and business assistance from the Massachusetts Food Trust Program for increasing access to healthy, affordable food in low-income, underserved areas. Other topics for discussion include a food partnership between Williams College and North Adams Public Schools, and a "food innovation" project in Adams that will establish a hub of resources for food and wellness.

Addressing these issues takes time, education and most importantly, trust.

In doing this work, Northern Berkshire Community Coalition Executive Director Amber Besaw said she was surprised to see how some efforts to curb hunger make sense on paper, but people on the street aren't buying into it. So she and other community workers are trying to figure out why.

"For example, we had a free mobile food pantry that came to the Brien Center parking lot, a stone's through from the North Adams Housing Authority high rise. So this was free, healthy food within walking distance. Yet we had people who said, 'I'm not interested' or 'I'm not going to eat that.' So we're scratching our heads try to answer those questions of why, and where are we coming from with this," she said.

McMann, of the Berkshire Food Project, said the best way to understand these issues is to meet people where they are at and listen.

"Honestly, I think that if every single person in North Adams would come and have lunch with us once at Berkshire Food Project we would have a better community because people would have a better understanding of what's going on in people's lives," she said. "We have a history in this country of shaming people who don't have enough, so out of pride or embarrassment they don't access [help]."

While some people don't always want to talk, McMann and Chilson both said they've gained incredible insights when they do make personal connections: Like the person who finally got a job, only to come back to the meal site a few days later saying "it didn't work out" because the employee couldn't afford the non-slip shoes required for the role.

Or the man who had been receiving canned groceries, but was using a rock and an old hammer to open them because he couldn't access a can opener; it took a dietitian making a home visit to help intervene.

Or the couple, who clearly were living outside, that came in for months for meals until they finally felt ready to meet with a housing representative, a meeting which eventually led to employment and reduced visits for meals.

"The important thing about the quality of life and health is having a good social connection. One common way everyone can connect is food; we all need food to thrive," Chilson said.

"We are really, really lucky here. We have a very supportive community," McMann said.

What keeps her up at night, in addition to trying to run a meal program in an old building, is knowing that there is still a disconnect between resources and people.

"I know that there's enough food," she said, "but how do we get food to the people who need it?"

Jenn Smith can be reached at jsmith@berkshireeagle.com, at @JennSmith_Ink on Twitter and 413-496-6239.