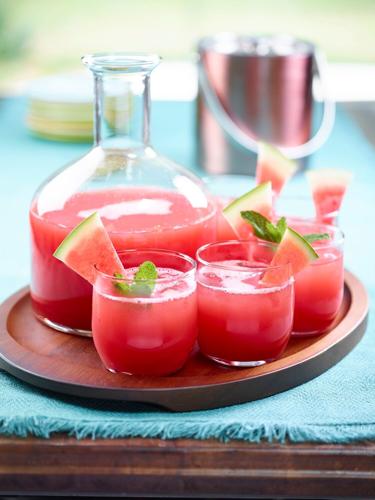 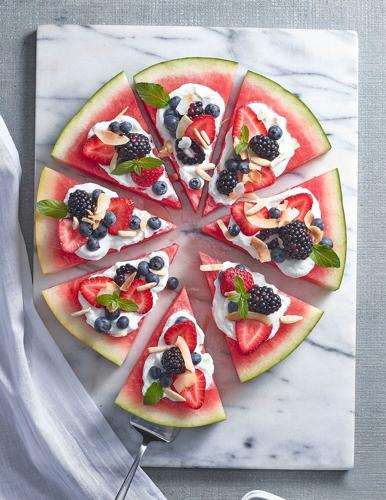 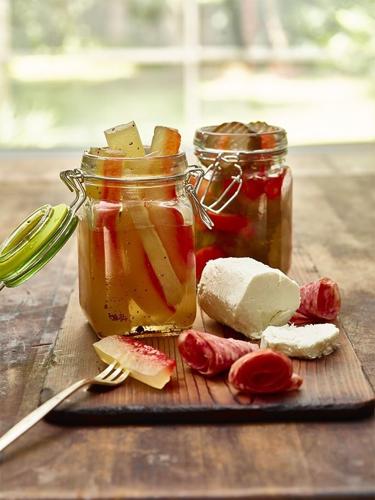 Watermelon ...  It's simple. It's easy to prepare. It's the ultimate summer party and picnic people pleaser.

"It is so much fun and so healthy at the same time," said Megan McKenna, director of Foodservice & Marketing at the National Watermelon Promotion Board in Winter Springs, Fla.

According to McKenna, watermelon is grown in over 30 states, with the most grown in Florida, Georgia, California and Texas. Although its popularity may peak in the summer in New England, it is available all year-round at the supermarkets. "In the fall and winter, most of the it is imported from Mexico," McKenna said.

More than 300 varieties of watermelon are cultivated in the United States, with even more varieties grown around the world. Although there are subtle differences due to where they are grown or the time of year they are grown, "all have the same signature watermelon experience," McKenna said.

The four basic types of watermelon are:

- Seedless; the most common watermelon found in supermarkets in the U.S.; it can be round or oblong and weighs up to 25 pounds.

- Yellow and orange flesh colored; "people say they are more sweet, more honey-flavored, but have the same crunch as the others when biting into it," McKenna said.

Watermelons are also a great value, McKenna said, since every part of it can be used. "The watermelon's closest cousin is the cucumber. The rind (the white part between the green skin and the flesh) is similar in texture and taste to cucumbers. It can be used in recipes in place of cucumbers, like kimchees, slaws and you can pickle it. The first cookbook in America, published in the 1790s had a recipe for watermelon rind pickles," she said. It's a great way to used the whole food product and reduce food waste."

The secret to picking out a watermelon in the market, McKenna said, involves three steps. "Look at the watermelon to see if it has any bruises or dents. Lift the watermelon, is it heavy for its size? Turn it and look for the buttery yellow spot, where it sat on the ground and ripened in the sun."

After bringing a watermelon home from the market, it can be stored on the counter or in the refrigerator prior to being cut. Once it's cut, though, McKenna said to store leftovers in the refrigerator, where they should stay good for three to five days. "Leftovers can also be frozen; juice can be frozen in ice cube trays and used as ice cubes or freeze leftover watermelon for smoothies."

When cutting a watermelon, "there is no wrong way, there are so many ways to do it," McKenna said. "You can cut a mini watermelon in half and then into a checkerboard pattern to make watermelon 'popsicles.' There is also nothing wrong with quartering a large watermelon and cutting it into the traditional slices."

Since 92 percent of a watermelon is water, she said it is good for staying hydrated. "Eating a slice of watermelon is like drinking a large glass of water."

McKenna added, it's also great to prepare ahead of time and have on-hand in the refrigerator for picnics and other -on-the-go activities and as nutritious snacks for both adults and kids.

"One of my favorite ways to serve watermelon is to take a pizza slice [a 1-inch wide round of watermelon] and grill it," she said. "I then build a salad of arugula, shaved Parmesan and slivered almonds on top of it and pour on a drizzle of balsamic vinegar. It's so good!"

The hardest part of making this sweet pizza is deciding what toppings to use. Healthy enough for breakfast and sweet enough for dessert, this watermelon pizza will quickly make its way into your weekly meal rotation.

1 watermelon round cut into 1" (for crust)

Sprinkle watermelon pizza with coconut through almond toppings as desired.

These watermelon rind pickles that leave the slightest bit of red flesh for a beautiful color and taste experience!

In large pot, bring water and salt to boil over medium high heat. Add rind pieces and boil until tender, about 5 minutes. Strain. Transfer rinds to a large metal bowl.

In saucepan, combine remaining ingredients. Bring to a boil over medium high heat, stirring until sugar dissolves. Simmer for 15 minutes, until slightly reduced. Pour over watermelon rinds in bowl. Place plate over top to keep rinds submerged in liquid. Cover and refrigerate for one day. Transfer to a glass jar and keep sealed in the refrigerator for up to 2 weeks.

Serving suggestion: enjoy with your favorite deli meats and cheeses, perhaps with other pickled veggies for a tasting party.

Cool off with refreshing pink sangria

19 summer recipes to cool down with

Frozen drinks: These cocktails are on the rocks, literally

Margaret Button: Too hot to bake? This decadent ice cream pie will cool you off

Keep your kids cool with these sweet treats