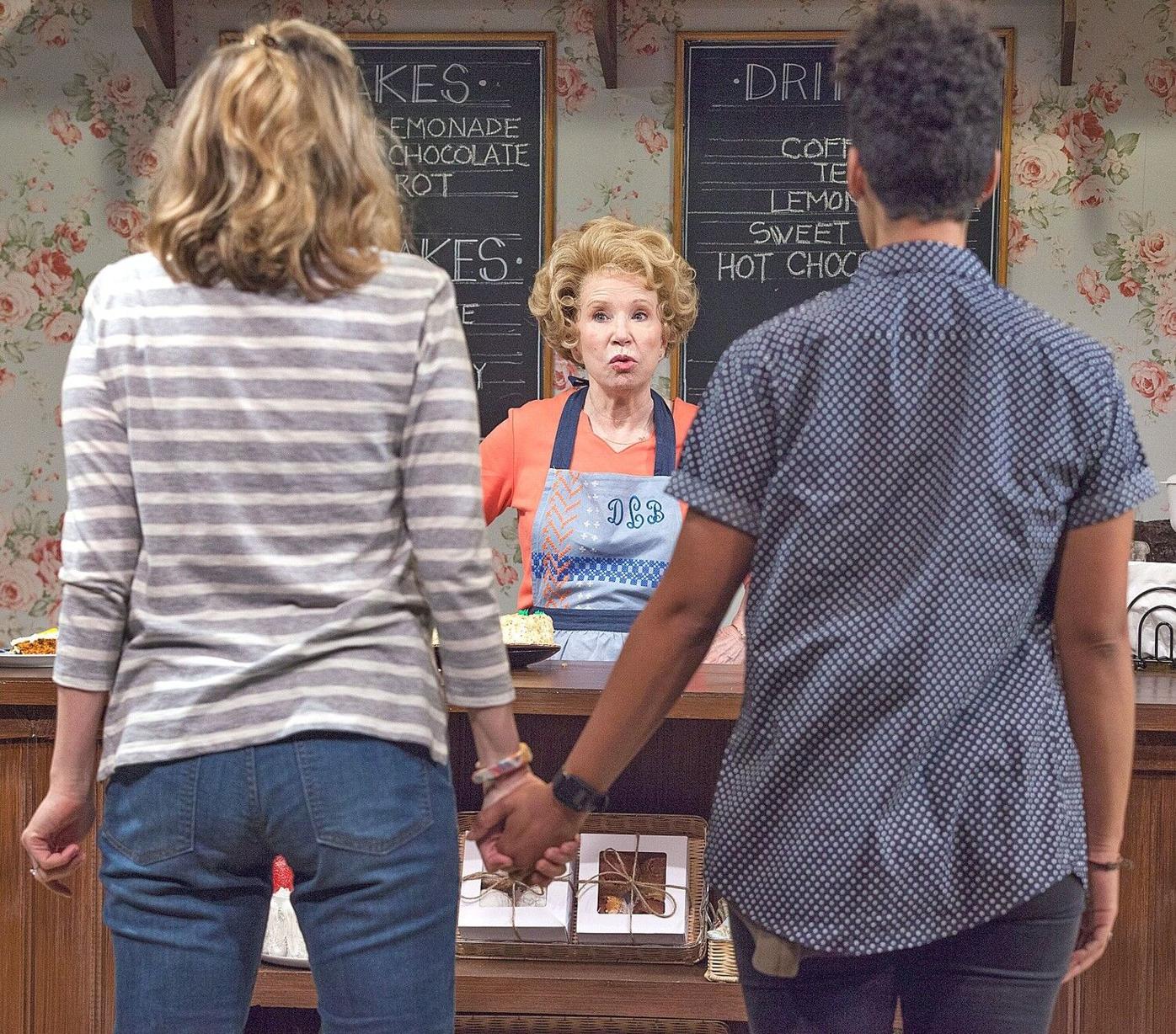 Virginia Vale, Debra Jo Rupp and Nemuna Ceesay in Barrington Stage Co.'s production of "The Cake." Rupp will reprise the role in upcoming productions of the play in Los Angeles and New York City. 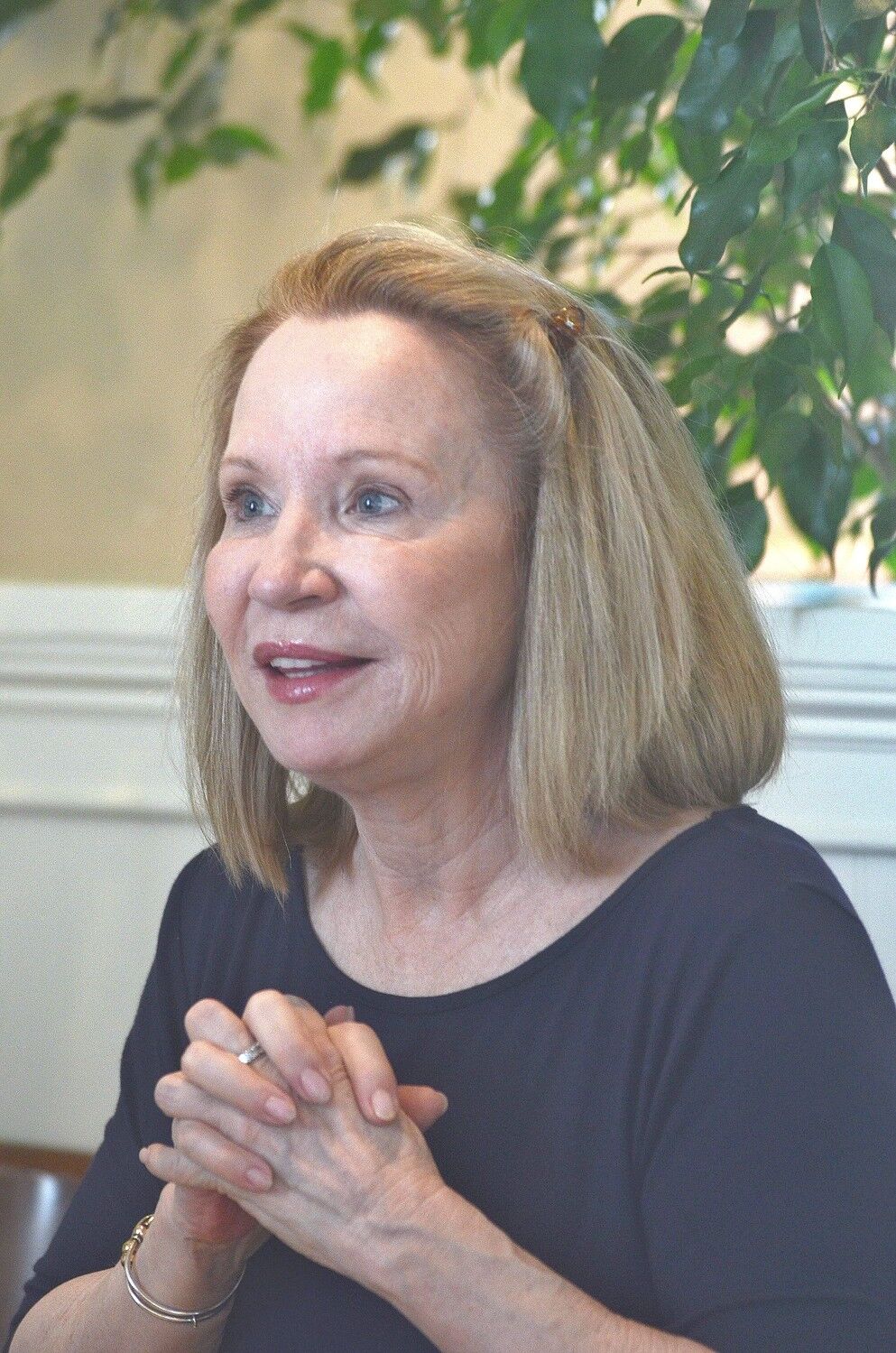 Debra Jo Rupp chats with a reporter while having breakfast at Haven in Lenox. 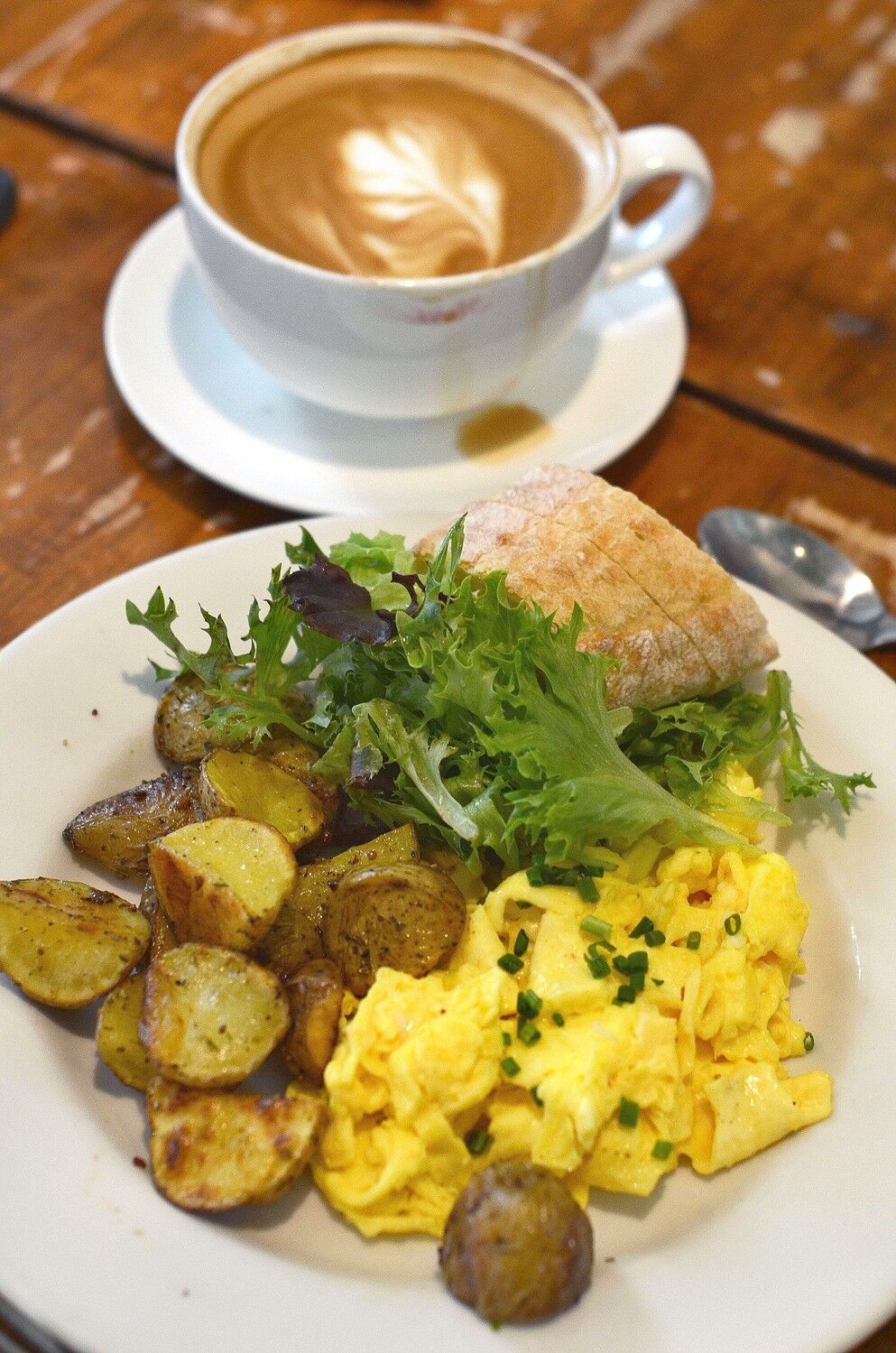 Debra Jo Rupp dined on scrambled eggs with roasted potatoes, mixed greens and a side of bacon at Haven Cafe and Bakery in Lenox. 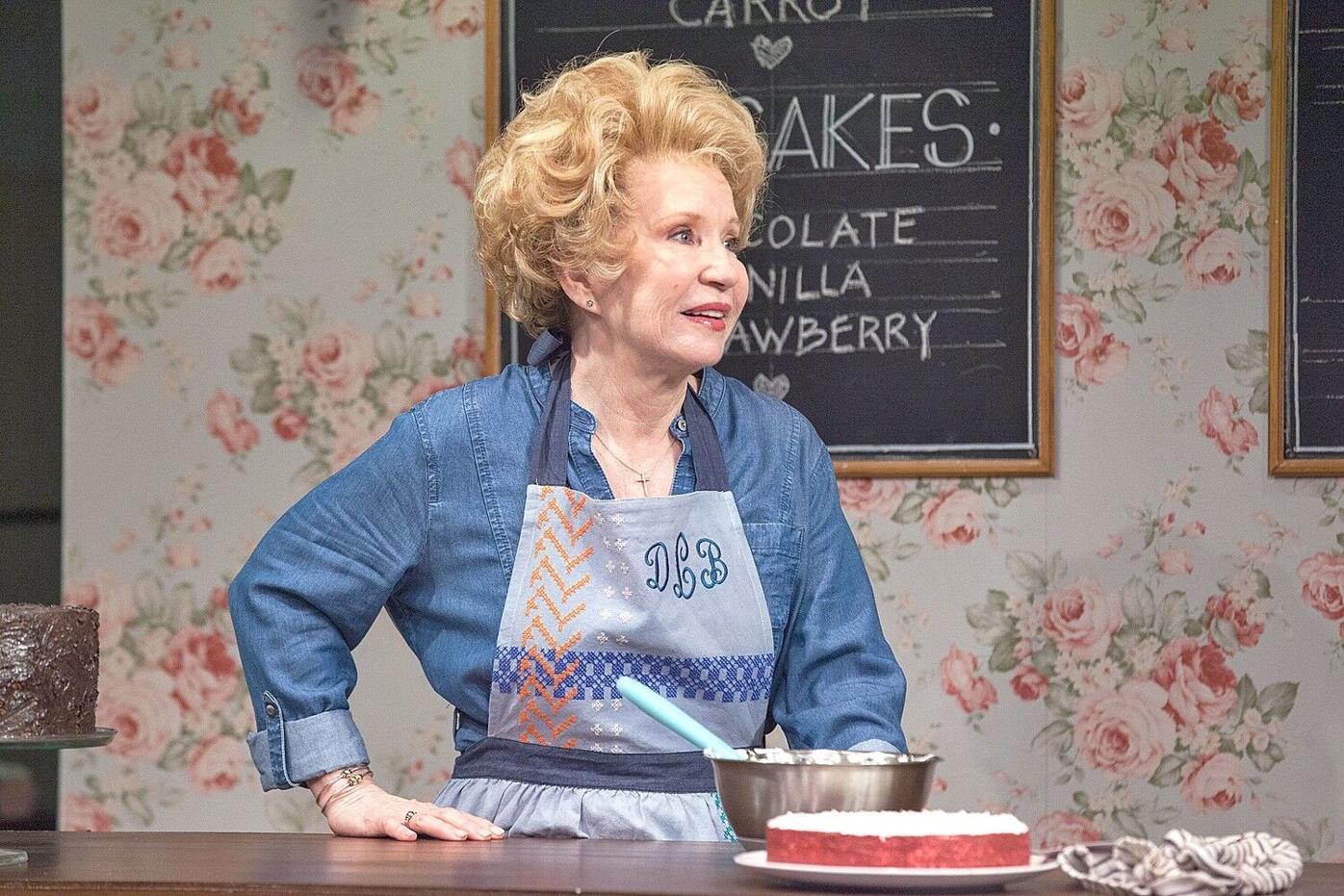 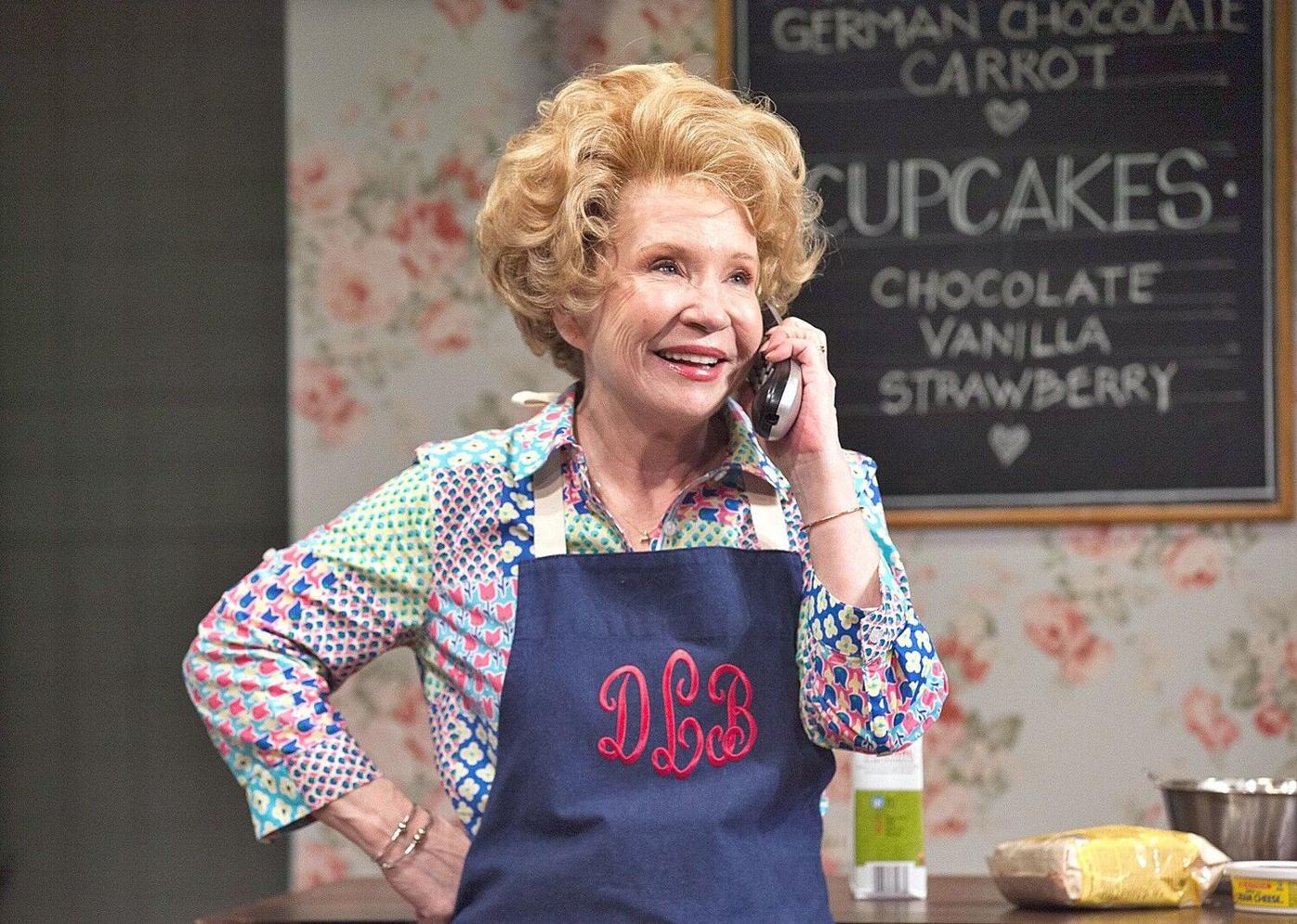 Virginia Vale, Debra Jo Rupp and Nemuna Ceesay in Barrington Stage Co.'s production of "The Cake." Rupp will reprise the role in upcoming productions of the play in Los Angeles and New York City.

Debra Jo Rupp chats with a reporter while having breakfast at Haven in Lenox.

Debra Jo Rupp dined on scrambled eggs with roasted potatoes, mixed greens and a side of bacon at Haven Cafe and Bakery in Lenox.

"I'm not a desserts person," the actress told The Eagle over scrambled eggs with roasted potatoes, mixed greens and a side of bacon at Lenox's Haven Cafe and Bakery.

For those who watched Rupp play Della in "The Cake," this may come as a surprise; the baker brandishes her batter and delights in plenty of it throughout the comic drama, which finished its run at Barrington Stage Company's St. Germain Stage on July 15 but will endure in subsequent Los Angeles and New York productions.

No, Rupp has a more common morning (and afternoon, and night) affliction: a coffee addiction.

"Oh, it's so exciting!" Rupp said as a large skim latte arrived at the table moments after she sat down.

"It has everything," Rupp said of the play she calls "probably" her favorite.

Neither city is unfamiliar terrain for her. Following her graduation from the University of Rochester in 1974, Rupp lived in New York City for 17 years before spending the next 17 in Los Angeles. After years of battling traffic and tightly packed housing, however, she was prepared for a change. She built her "dream house" in a Lee lot next to her best friends, Dee Ann and Steven Zimmer, who had previously moved to the Berkshire town from Los Angeles. While Rupp maintains an apartment in New York City, she considers Lee her home.

"People carry your groceries for you here ... not so much in the big cities," she said.

The move was a return to Massachusetts for Rupp. She spent most of her childhood and adolescence in Boxford, Mass., where she still has family. Lee, then, was a convenient place to settle down.

"It was perfect because I wanted a place that was equidistant from my family and New York City so I would still have a city to work in," Rupp said.

She was raised Southern Baptist for part of her childhood. Her religious affiliation influenced her decision to play Della, whose religious beliefs are at the fore in "The Cake."

In the play, the news that the daughter of Della's best friend is marrying another woman, delivered through a wedding cake-baking request, challenges Della's longheld religious beliefs. Her character subsequently reflects on love and marriage, aiming to express affection while also clinging to her principles. (The prominent case of a Colorado baker who declined to make a wedding cake for a gay couple due to his religious beliefs helped inspire Brenstetter's work.)

"The Cake" debuted at Los Angeles' Echo Theater Company last summer. Rupp worked for little money ("it was for two cents and a doughnut") because she liked the play so much. Her interest stemmed from a Manhattan Theatre Club reading of the work three days after the 2016 U.S. presidential election.

"I think that's the only thing that got me through the election because it was, I felt, a really good message: kind of hopeful, kind of funny and lovely," she said.

The humor especially appealed to her.

Rupp was the only holdover from the Los Angeles cast, creating a challenge for the actress.

"With a different cast, they have different takes on what was going on," she said. "And some of it, I was like, 'No, no, no, no, this worked so well in LA, if you would just do this,' which you can't do. You can't make someone do something because then it doesn't work. Then it's not honest."

The set was an adjustment, too.

"When we did it in LA, the bedrooms were onstage. There was no spinning of anything. In LA, it was very choreographed, but you didn't have to do that here because everything [spun]," she said, referring to the St. Germain Stage's rotating sets.

But perhaps the greatest obstacle for Rupp during the Pittsfield run was an unprecedented one for the actress: she got the flu.

"I have never missed work being sick ever," she said, knocking on the table. "Never. Three days I was down. Three days. I lost a little weight, which was nice since I have to eat so much cake — that was nice — but I lost my voice. And that's never happened to me before. I didn't lose the cough from that thing until the day after we closed."

She hid it well; the play received excellent reviews during its Berkshires run, led by Rupp's strong performance. Pittsfield audiences were more receptive to Della than those in LA.

"They were very much more interested in both sides of the coin, whereas when we did it in LA, their mind was made up. So, my work was a little harder to get them on board," Rupp said.

The actress didn't take much time to recuperate after the show closed. Less than a week later, she was participating in a Chester Theatre Company production of Iranian playwright Nassim Soleimanpour's "White Rabbit Red Rabbit," a solo play in which the actor receives the script for the first time upon taking the stage.

"Your only instructions are — I think I can say this — you have to do an animal impersonation. They tell you the animal. And you have to bring your own bottle of water. It's terrifying," she said, noting that she likes readings but that this role was more difficult.

Rupp isn't one to shy away from new experiences; there's a hyperactivity to her that conjures Della, who is ever-so-quick to keep her hands busy in the kitchen. For example, winter in the Berkshires is too slow for Rupp.

"I need a little bit more energy than what's here," she said, noting that she often visits her New York City apartment during the coldest months.

But summers in the Berkshires have kept her plenty occupied. Her first production in the county was Barrington Stage Company's "Ring Round the Moon" in 2006; she has since been cast in plays at Berkshire Theatre Group, Williamstown Theatre Festival and Chester Theatre Company. Before that, she starred as Kitty Forman on the hit Fox sitcom "That '70s Show," which ran for eight seasons beginning from 1998-2006.

"I loved everything about it," she said before adding, "I felt sometimes, in the beginning, that I had to fight a little bit to make Kitty mean something on the show. But looking back now, I was completely wrong."

"If you have to spend eight years playing one character, it should be Kitty because she was completely, I don't know, manic depressive. She was up. She was down," Rupp said.

When asked if the cast gets together these days, Rupp said, "The problem is we're so spread out. Laura [Prepon]'s in New Jersey. I'm in Massachusetts or New York. The ones that are in LA do get together, like Wilmer [Valderrama], Danny [Masterson], Ashton [Kutcher], Mila [Kunis]. Topher [Grace] is usually in a movie or something that requires him to travel, but if we're in the same place, we get together. Now that I'm doing 'The Ranch' with Danny and Ashton, I see Mila. I haven't seen Laura since the baby, so that's next on my list."

Rupp doesn't mind being a drive away from some of her actor friends. She has the Zimmers and her two silky terriers, Olive and Martini, to keep her company. She also enjoys tending to her garden.

"I try to be here as much as I possibly can," she said. "And I am going to die in this house because it was a trial building it, so I'm not letting it go."

Benjamin Cassidy can be reached at bcassidy@berkshireeagle.com, at @bybencassidy on Twitter and 413-496-6251.ON THE MENU ...