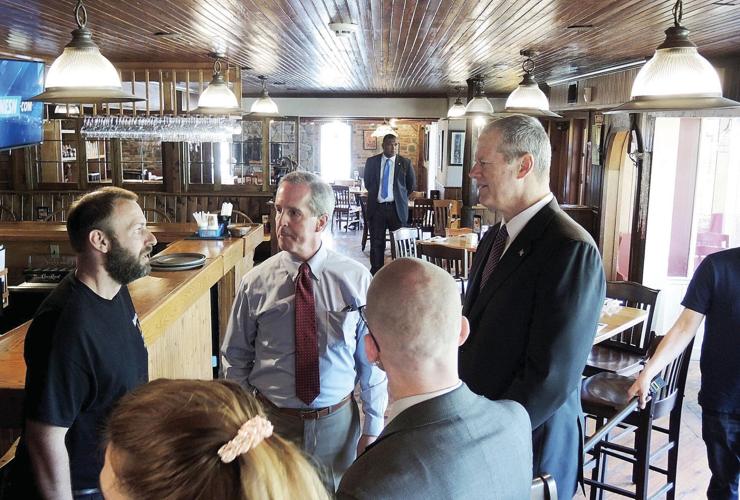 Jim Hallock, left, co-owner of the Shaker Mill Tavern in West Stockbridge, speaks with Gov. Charlie Baker, right, about how the advent of broadband internet in town has benefited his business. At center is state Rep. William "Smitty" Pignatelli. 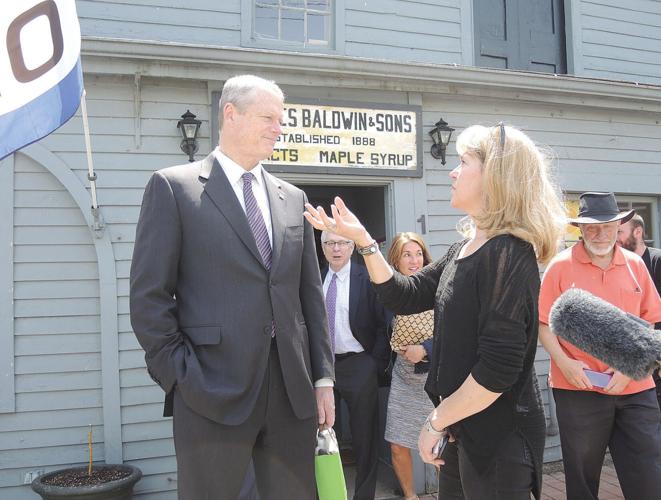 Gov. Charlie Baker speaks with Elizabeth Aspenlieder of Shakespeare & Company while on a walking tour of West Stockbridge to highlight the advent of broadband internet service. Charter customers Baker spoke with praised the faster connections they now have as a result of a state grant to expand the company's networks in three Berkshire County towns.

Jim Hallock, left, co-owner of the Shaker Mill Tavern in West Stockbridge, speaks with Gov. Charlie Baker, right, about how the advent of broadband internet in town has benefited his business. At center is state Rep. William "Smitty" Pignatelli.

Gov. Charlie Baker speaks with Elizabeth Aspenlieder of Shakespeare & Company while on a walking tour of West Stockbridge to highlight the advent of broadband internet service. Charter customers Baker spoke with praised the faster connections they now have as a result of a state grant to expand the company's networks in three Berkshire County towns.

WEST STOCKBRIDGE — Here's a surefire restaurant recipe, for a dish you might call the meltdown: A hundred customers are packed into the Shaker Mill Tavern Family Smokehouse in West Stockbridge.

But then, before the technological change that brought Gov. Charlie Baker visiting Tuesday, servers would occasionally come back with bad news for Jim Hallock.

"I'd be behind the line with 30 tickets up there and the girls would come back and say, 'We have no internet,'" he said.

Baker stopped into the family's restaurant on a walking tour to gather firsthand evidence that a state investment in broadband internet access is paying off.

"We couldn't even have wifi here," Jim Hallock said. Now, people with laptops linger for hours, snacking and drinking.

"It's a great story, congratulations," Baker told the Hallocks. The governor said his administration will continue to press to close the digital divide.

"It's very hard to be successful in the 21st century without it," Baker said of broadband, in a visit later Tuesday with the editorial board of The Eagle.

It was a year ago this week the Baker administration shifted course on a "last mile" strategy to get service to homes and businesses.

One of its first steps was to reach out to cable firms. Last August, the Massachusetts Broadband Institute approved a $1.6 million grant to Charter to upgrade and expand service in West Stockbridge, Lanesborough and Hinsdale, providing high-speed access to about 3,400 premises.

That buildout is expected to be complete by next March.

But hundreds of businesses and households are already online with Charter's Spectrum service, including many in West Stockbridge center.

At The Floor Store, at 12 Main St., co-owner Joseph P. Roy told Baker that faster internet has improved his trade.

"We had cable, but it was pretty lousy cable," said his father, Joseph G. Roy Jr. "All I know is it's faster now. And I do business with customers I've never met."

At the Shaker Mill Inn on Oak Street, owners Bob and Mary Thibeault say that thanks to the Charter expansion, they now possess a tool that allows them to compete with the chains.

Before the upgrade, their internet would go down, to the horror of younger guests.

"The old system would crash. It lessens their experience here," Bob Thibeault said of guests. "We'll lose out if we don't have the right technology."

Truc Nguyen, who helps the Thibeaults with marketing, said the town's new broadband enables her to work in the place she grew up. She just returned from a consulting trip to Croatia.

"Now I feel like I can come back and work from here," Nguyen said. "I'm not tethered to my high speed in New York City. I'm able to be here and help my community."

Having a competitive edge is part of the appeal at No. 6 Depot as well.

"We really unbelievably appreciate the broadband," Lisa Landry, co-owner of No. 6 Depot, told Baker, after he toured the coffee house and its roastery.

"We just suffered through this horrible service," she said of an earlier provider. "I feel like we need to offer wifi because of that. It's not a high-traffic town."

"It's sped it up quite a bit. It's been a huge help," said Moffatt, whose husband is the fifth generation in the business. "We're happy."

With better internet through Charter, online sales are easier to fulfill, according to Moffatt and a friend who works at the shop, Marjorie Powell.

At Stone House Properties at 38 Main St., owners C. Randolph and Sheila Thunfors explained that in the real estate market, lack of broadband can be a kiss of death.

"The first question we get is what is the internet?" he said. "It's a huge economic impact."

Broker Suzanne Crerar said a Tyringham house built in 1995 for $800,000 is about to sell for $299,000 in large part because it lacks telecommunications access.

After the tour, several lawmakers vowed to see other communities get what's arriving now in West Stockbridge.

State Sen. Adam Hinds said he hoped the tour impressed on the governor's office that work is paying off. "So we can keep our foot on the gas pedal," Hinds said.

Carolyn Kirk, deputy secretary in the Executive Office of Housing and Economic Development, who joined the tour, said the state is making progress. She praised the shift in strategy a year ago, which she said came after Baker pressed for new approaches, including tapping into the private sector.

"It really opened a lot of new paths," Kirk said, including one that allows municipalities to build their own networks. "Nearly every town is now on a path."

She added later, "We're keeping it going and not stopping until every town is served."