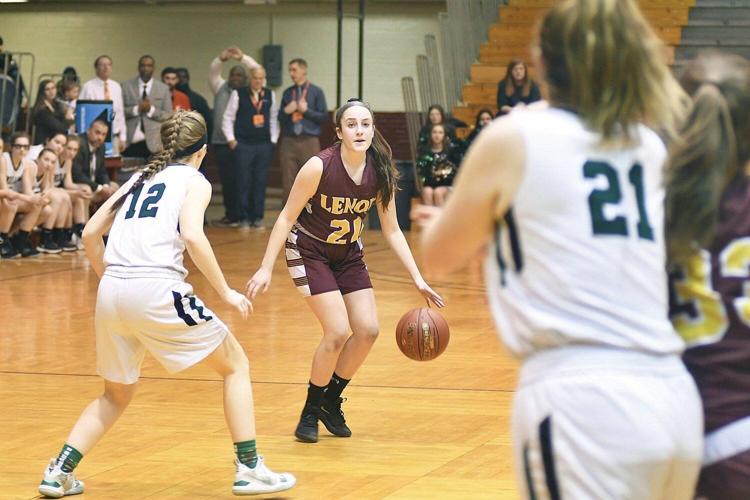 Lenox's Tabor Paul will try to help her team win a Western Massachusetts Division IV title today when the Millionaires take on Monson. 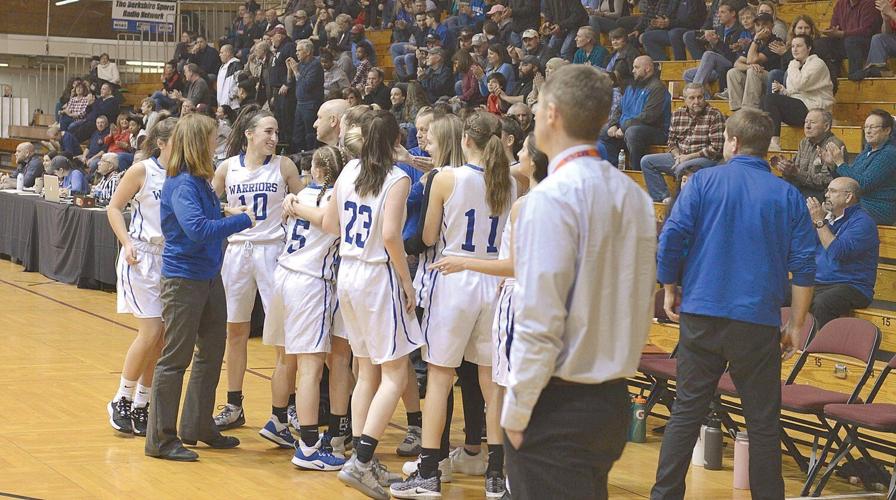 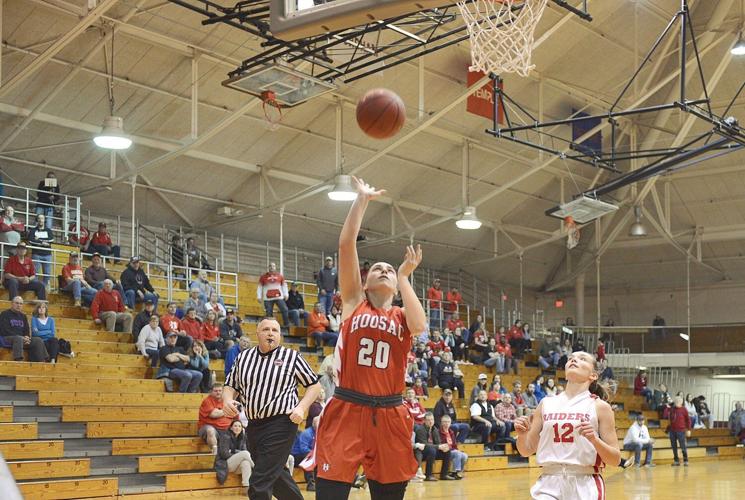 Riley Robinson helped her Hoosac Valley team win a Western Massachusetts Division III title last year. If the Hurricanes are going to repeat, they will have to defeat rival Wahconah in the final. 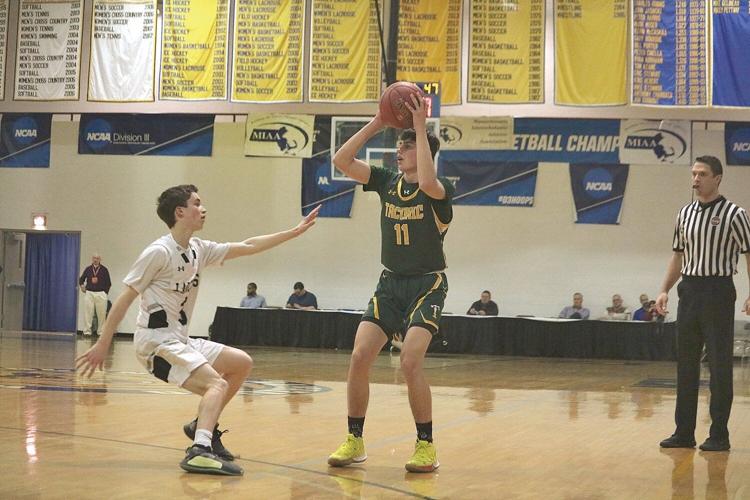 Bo Bramer and his Taconic teammates will take on Chicopee in the Western Massachusetts Division II final. 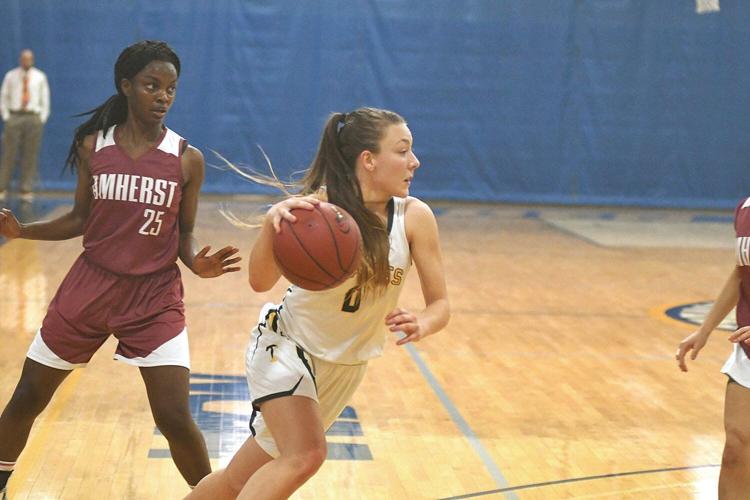 Lenox's Tabor Paul will try to help her team win a Western Massachusetts Division IV title today when the Millionaires take on Monson.

Riley Robinson helped her Hoosac Valley team win a Western Massachusetts Division III title last year. If the Hurricanes are going to repeat, they will have to defeat rival Wahconah in the final.

Bo Bramer and his Taconic teammates will take on Chicopee in the Western Massachusetts Division II final.

Berkshire County high school basketball teams have a chance to do something today that hasn't been done in more than a decade — sweep all of their potential Western Massachusetts championship games.

Six county teams will play for five championships at Curry Hicks Cage. It all starts at 10:45 a.m., when Division IV No. 3-seed Lenox plays top-seeded Monson in the first of six games in the building Doctor J. used to call home.

Lenox will be joined in girls' championship games by Taconic in Division II, along with Wahconah and Hoosac Valley in Division III.

This marks the third time in four years that Berkshire County teams have been involved in five of the six games on Championship Saturday. Last year, three teams won titles. Back in 2017, when five teams played, two schools won Western Mass. trophies.

The last time Berkshire County batted 1.000 on Championship Saturday was in 2009. That year, Hoosac Valley beat Drury in the Division II boys final, Monument Mountain knocked off Wahconah 46-41 in the Division II girls final, and in Division III, the Lee girls beat Monson 53-37.

Tickets for the Western Mass. finals are $10 for adults, $7 for students and senior citizens. Remember, one ticket allows you to stay and watch all six games, should you choose to.

Here are the games to watch.

For a Berkshire County reporter, it never feels like Championship Saturday without a 10:45 game. But it has been a while since a county team has won the brunch game.

It was 2013, back in the three-division era, when Lee beat Sabis in the D-III title game. County teams are 0-for-Division IV.

Coach Nicole Patella's Millionaires (16-7) will have a tough task to end that skid, when they play the top-seeded Mustangs. Monson beat Putnam 57-22 in the quarterfinals and downed Lee 65-24 in the semifinals.

The Mustangs (20-2) are led by Sydney DeVries, who is averaging 20 points in the tournament. She had a 22-point effort against the Wildcats. Mia Krupczak is the No. 2 scorer, averaging 14.5 points per game.

The Millionaires last made it to the championship game in 2012, losing to Sabis. The last Lenox championship came in 1992, when Samantha Herrick scored on a put back as time expired to hand Lee its only championship loss in a run of 11 seasons.

The game will be broadcast back to Berkshire County on radio stations WBEC (1420 AM) and WSBS (860 AM).

It isn't often that there's a regular-season rematch in a Western Mass. championship game, at least not between two teams that aren't in the same league. That's what comes up in the Division IV title game.

Baystate made it to the final by beating Lenox 83-73 in overtime. Travis Jordan, who did not score against Drury, had 25 points against Lenox.

The Blue Devils, who are the reigning Western Mass. Division IV champions, are looking to become the third Berkshire boys team in the 21st century to win back-to-back titles. The Taconic boys did it in 2018 and 2019, while the Hoosac Valley boys turned the trick in 2015 and 2016.

The last time Wahconah beat Hoosac in the Western Mass. tournament was in the 2018 quarterfinals, when Maria Gamberoni had 12 points and Noelle Furlong had nine in a 42-33 win.

Unsurprisingly, Hoosac and Wahconah are going to meet at the Cage. It'll mark the first All-Berkshire girls final since Hoosac beat Drury in the Division III championship game back in 2016.

It's also a rematch of last year's semifinal, won by Hoosac.

The Warriors have had, at least on the scoreboard, a much easier road to travel. They beat Frontier 50-23 in the quarterfinal and routed Sabis 75-25 in the semifinals. Hoosac beat Granby 56-47 with a late rally, and held off Hampshire Regional 53-48.

In the tourney, Wahconah has gotten balanced scoring from Furlong (15.5 points), Gamberoni (16.0) and Morgan Marauszwski (14.0). Hoosac's leading scorers have been Riley Robinson (15.5) and Sarah Field (15.5). Field scored only six points in the win over Hampshire. If that happens again, that could be very advantageous for the Warriors.

WBEC and WNAW will have live play-by-play.

This finals matchup wasn't necessarily the one the pre-tournament seeding anticipated. The top two seeds never got to Curry Hicks Cage in D-II.

Top-seeded Northampton was beaten by Pittsfield in the quarterfinals, while No. 2 Longmeadow lost to Amherst in that same round. That makes this a final between the third-seeded Braves and the No. 4 Spartans, because both teams took care of "Cinderella" squads. Taconic knocked off No. 7 Amherst, the team that eliminated Longmeadow. East Longmeadow beat eighth-seeded Pittsfield, after the Generals upended Northampton.

It has been a while since either of the finalists had hoisted a gold trophy. The Spartans haven't won a title since they were in Division I and went back-to-back in 2009 and 2010.

It's been even longer for Taconic, as the Braves haven't been in the winners' circle since the early 1990s. Taconic won back-to-back crowns in 1992 and 1993. The Braves are looking to be the first city team since Pittsfield in 2017 to win a D-II title.

WBEC and WTBR (89.7 FM) will have the live call of this game. PCTV will tape the game and rebroadcast it next week.

It's the rubber game between these two Western Mass. rivals, and it comes on the biggest stage.

Taconic won its second Division II championship last year, beating Chicopee. The Pacers got a modicum of revenge by beating the Braves in the HoopHall Classic in January.

Since the current Western Mass. tournament setup started in 1989, only one Chicopee team has been able to put a banner up in its gym. That was the 2013 Chicopee girls team. No Pacers boys team has ever won a basketball title.

The Braves, meanwhile, are looking to make a little history of their own. According to the list of Western Mass. champions handed out at the tournament, no Berkshire County boys basketball team, since this structure started in '89, has won three straight Western Mass. titles. Taconic won the last two championships in Division II. Hoosac Valley went back-to-back in 2015 and 2016 in the Division III field.

WBEC and WTBR will broadcast. PCTV will rebroadcast the game next week.