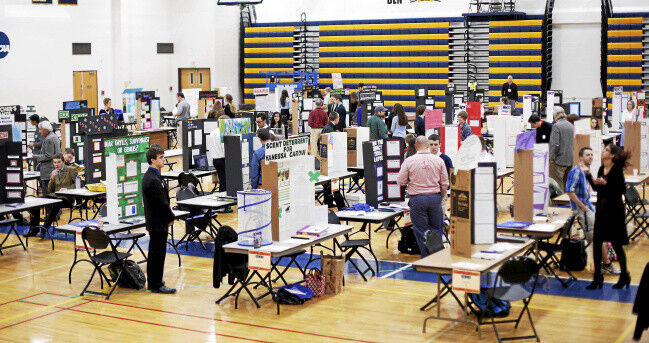 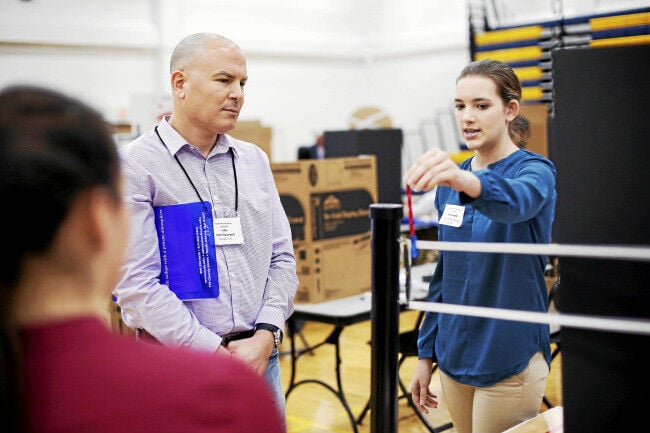 Pittsfield High School student Alexa Pudlo, along with her classmates Anna Quinto and Lauren Mazzeo, explain their idea for a retractable volleyball net to Jason Baumgart of Interprint to be judged Friday at the annual Western Massachusetts High School Science & Engineering Fair at MCLA in North Adams.

Pittsfield High School student Alexa Pudlo, along with her classmates Anna Quinto and Lauren Mazzeo, explain their idea for a retractable volleyball net to Jason Baumgart of Interprint to be judged Friday at the annual Western Massachusetts High School Science & Engineering Fair at MCLA in North Adams.

Jill Scussel, 16, decided to engineer a ski pole which fastens to the user's hand magnetically instead of via a strap after she took a spill as a freshman.

When Scussel fell, the strap hooked on her thumb and broke the bone.

"There was a lot of motivation behind this," Scussel said. "Where the strap would be there's a magnet on the pole, and another between your thumb and your index finger."

She added, "It functions as well as the normal strap by holding the weight of the pole; however, it releases if you fall to prevent injury."

That's one way to turn lemons into lemonade.

Scussel and her co-victor, Christopher Clark, earned invitations to the Intel International Science and Engineering Fair in Phoenix by winning Friday. Clark said he proved the viability of biofuel production by recycling carbon though algal pools in his experiment.

Forty-five judges perused a field of 75 experiments at the fair, which was held inside Amsler Campus Center at Massachusetts College of Liberal Arts.

Others purported to feature an "improved volley ball net," or attempted to reduce tsunami destruction via hydroelectric generators. One even centered around "Man vs. Wild" television star Bear Grylls.

Ward delivered a keynote address, pointing out how "failure" and "mucking up" is an integral part of the way one learns in science, and should lead to redoubled efforts to understand confusing results and thus further knowledge and understanding.

"I failed so much and I still got to being a doctor," Ward said, recounting three years of missing the mark in her graduate studies — concerning current flow through small semiconductors used in bendable electronics screens — before she finally hit pay dirt.

"Science isn't for those who hit a struggle and give up," Ward continued. "It's not for those who aren't curious and don't start in the first place. It's for those who are tenacious. Who want to know something and are going to do anything they can to figure out that something, will spend years working on that one tiny thing. It's for those who are willing to fail and not let failure keep them down, to take those mistakes and learn from them. To turn them into something useful that gives us more knowledge. You're all here because you didn't give up when you failed."

Clark, 17, a senior at Westfield High School, probably put forth the most technically skilled project at the fair.

He said his project showed how pumping carbon and other waste produced by coal-burning factories into algal pools not only remediates environmental harm caused by the burning of fossil fuels, but also creates new energy in the form of biofuels: the algae.

Putting the practice into place would not only be "lucrative," but it would also reduce harm to the environment, Clark said.

"Say you have one of the algal ponds located in a town in Kansas — where they rely heavily on coal for the production of electricity," Clark said. "Using fossil fuels produces so much carbon dioxide and pollution, and that carbon dioxide can be dissolved into the open-pond system, like a natural filter, resulting in an increase in the amount of biomass, and therefore an increase in the amount of biofuels."

He added, "You turn what would be pollution into additional fuel. Having the excess carbon dioxide allows for virtually unlimited resources in which the algae can grow exponentially. It just cranks out algae."

Clark engineered and designed how such a system might work and demonstrated it using three small acrylic plastic pools and a propulsion mechanism.

It worked. He ended up producing 200 grams of algae.

Many of Friday's honorees earned passes to the Massachusetts State Science & Engineering Fair at Massachusetts Institute of Technology in May.