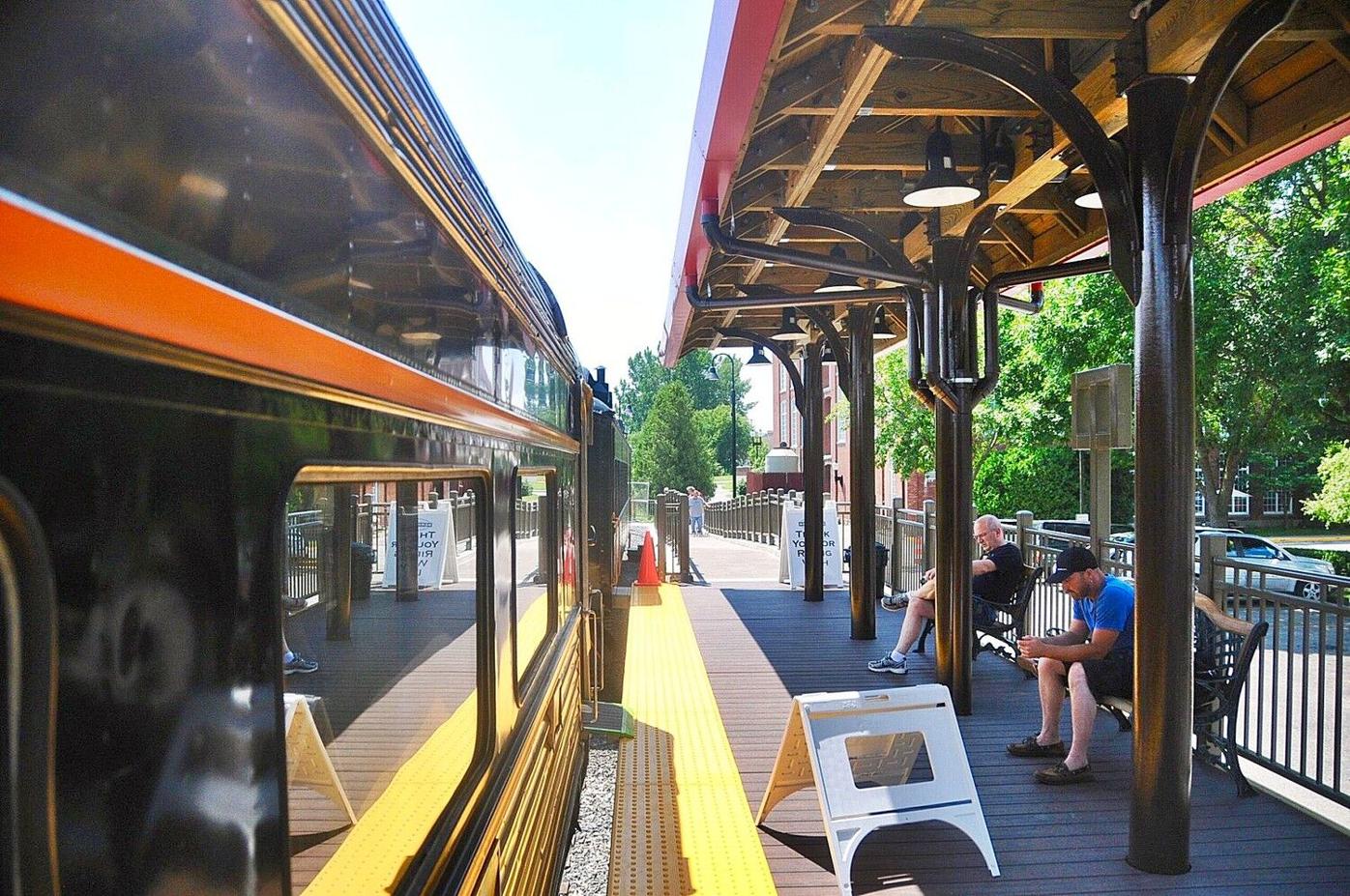 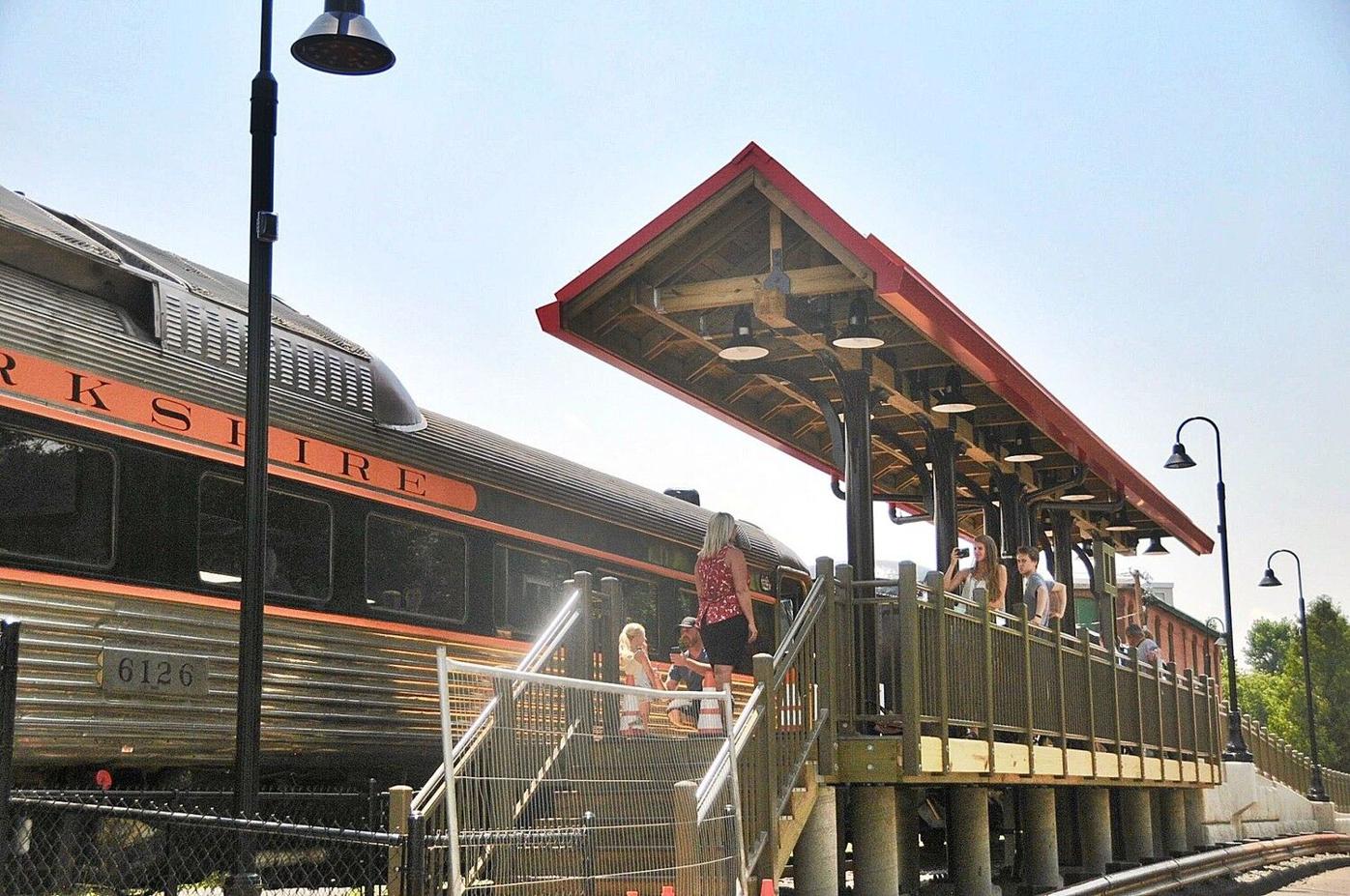 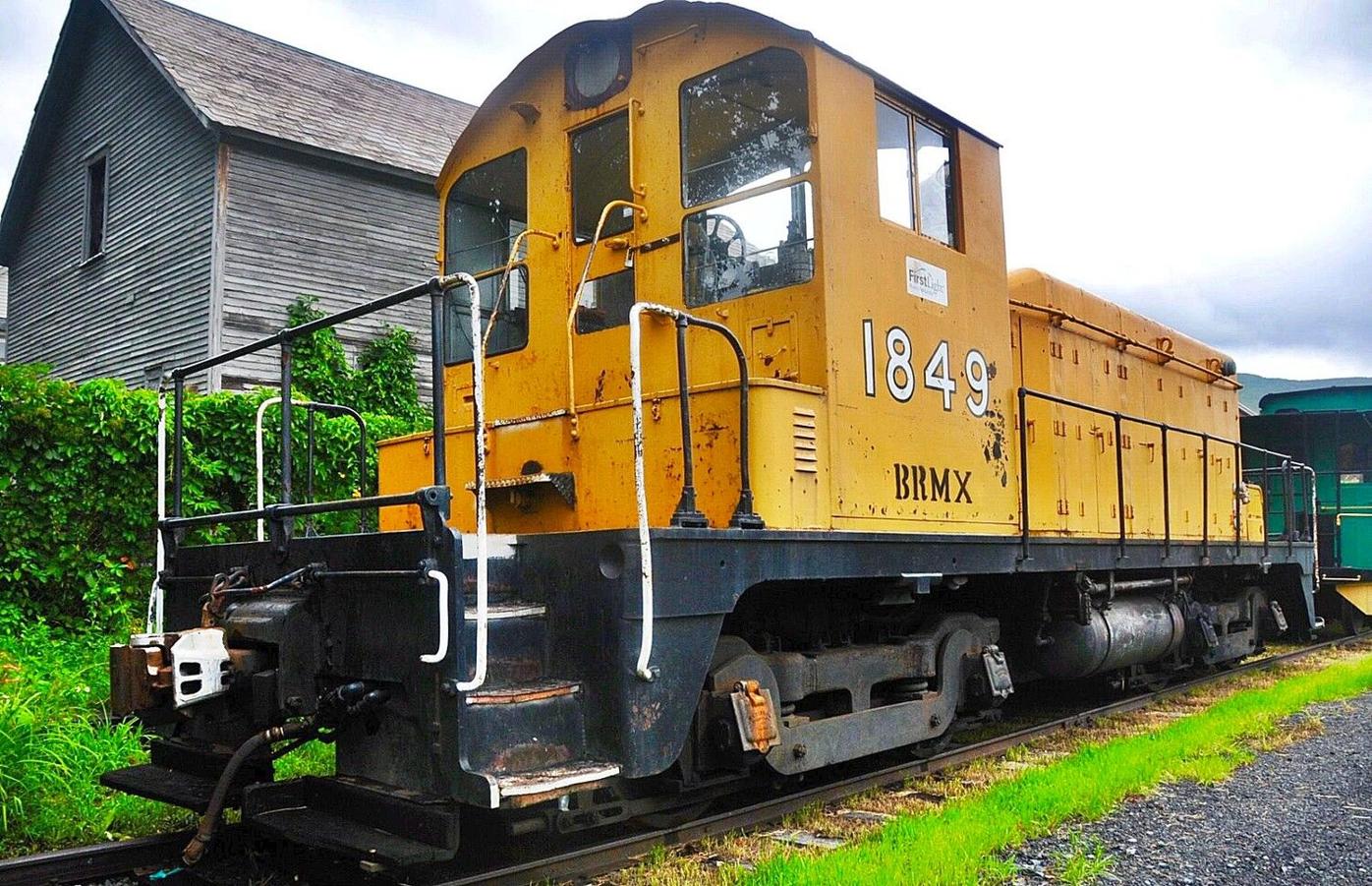 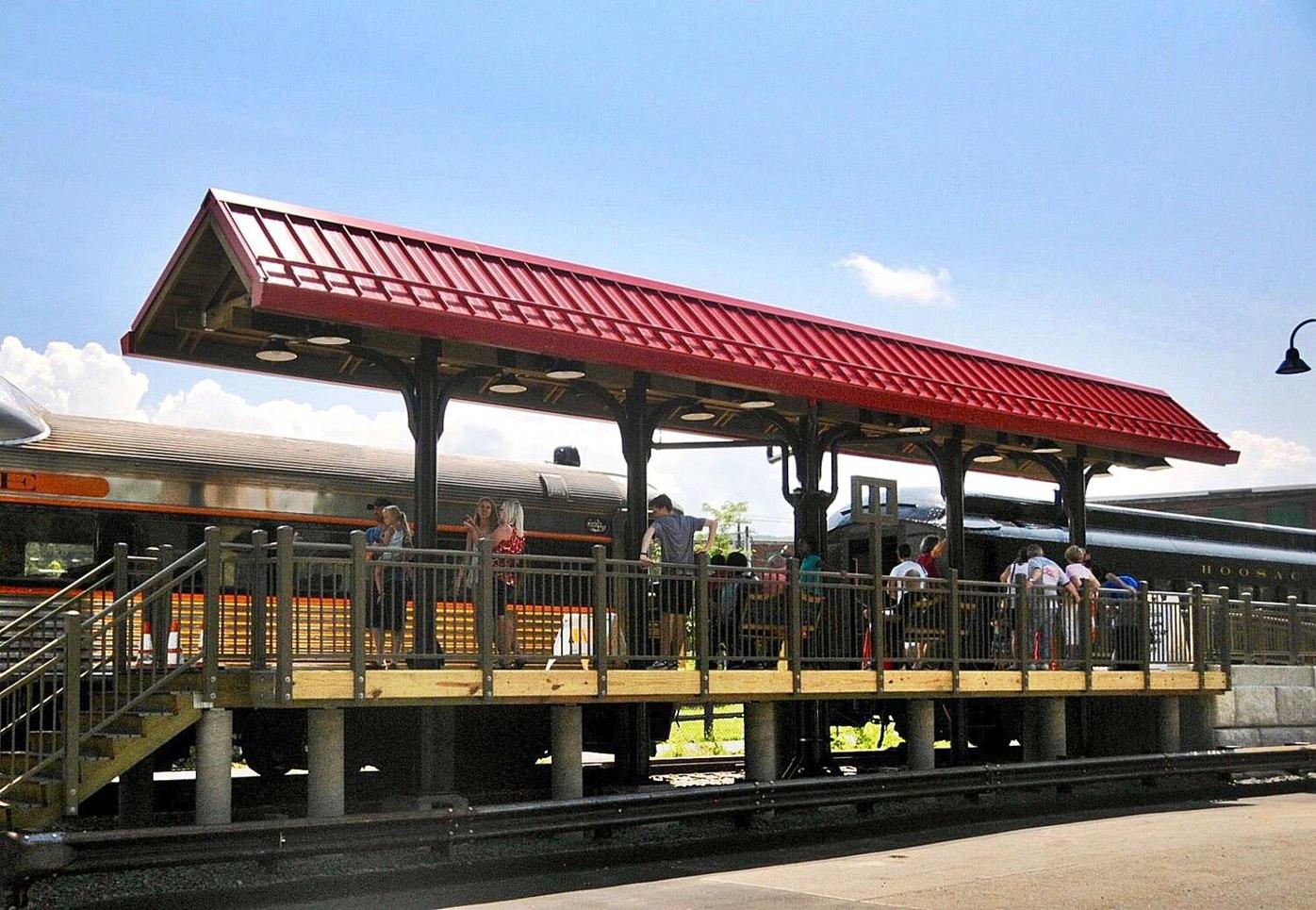 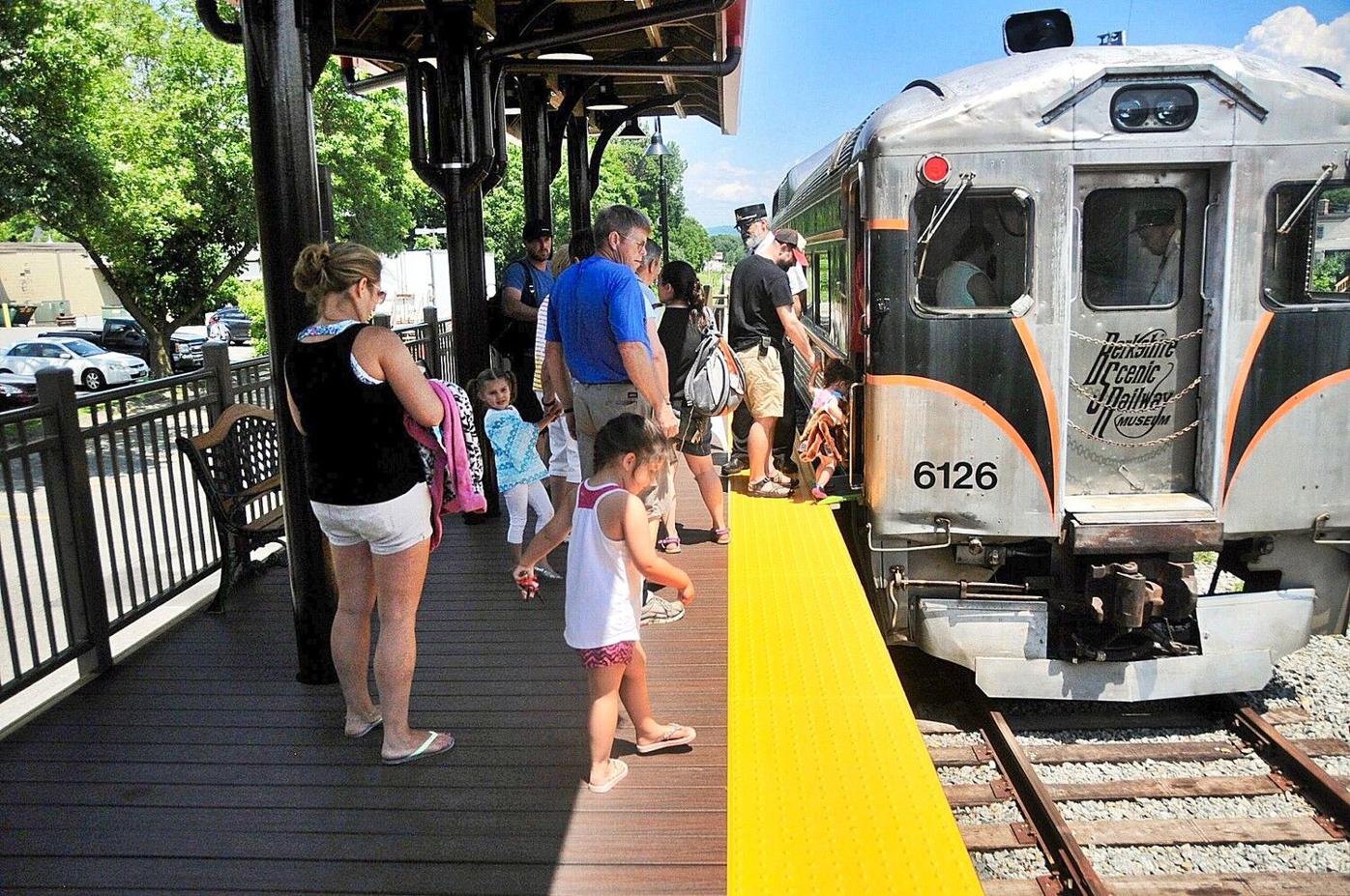 ADAMS — Now that Berkshire Scenic Railway has laid the final mile of track and completed the new passenger boarding platform outside the new Adams Station, it would seem there is little left to do.

But that's not how the scenic railway folks see it.

The volunteer group is looking next to install rest rooms at the Adams Station, according to director Jay Green. A fundraising effort to purchase and install classic train station furniture and historical exhibits inside the station will follow. And the group just bought another locomotive, which needs an extensive restoration.

The railway began offering scenic rides on its Hoosac Valley Service in 2016, five years after having lost access to tracks in Lenox and Stockbridge. The 8-mile round trip travels along the Hoosac River, from behind the Brien Center on American Legion Drive in North Adams to the newly completed station on Hoosac Street in Adams.

The ride had been abbreviated, stopping at Lime Street in Adams for its return trip to North Adams, until the last mile of track extending south to Adams Station was completed late last year.

The track and platform work were funded by a MassWorks grant of $2.6 million. Some work is still outstanding, such as finishing touches to the platform and the rest rooms once the sewer line is extended.

"We'll go as far as these funds will let us," said Donna Cesan, interim town manager and director of community development.

The completion of the train track and platform coincide with the nearly completed repaving project of the parking lot at the Visitors Center, just across the street from Adams Station, she said.

Add in the recently completed extension of the Ashuwillticook Rail Trail that runs right through both new features, and Adams now has a confluence of transportation modes in the heart of downtown — which was the goal all along, Cesan said.

Green said the new platform makes boarding the train much easier and safer.

He said the next phase will be finding funds to do the interior of Adams Station.

"Soon, Adams will have a really nice boarding complex," Green said. "And we built all this from nothing."

The work on the interior of the station still needs to be funded, something the town and the railway are looking at together.

Cesan said the Scenic Railway already has some classic artifacts from old train stations, including a pot-belly stove and some wooden benches. There also would be displays addressing Adams' history with the railroad.

"We want it to give people a sense of what it used to be like to take a train 100 years ago," she said.

Now that all the projects have come together, Cesan said she's excited by how it will shape the future of the town's economy.

"This has become an increasing focus of public investment but also of more public activity," she said. "That's the kind of interest that will take us into the future."

Green said the reserve locomotive — a 1941 ElectroMotive Division model SW1 locomotive from the Mount Tom Power Plant in Holyoke that was about to be scrapped — was purchased in case of a breakdown or for special events. The group paid the scrapping price for the 600-horsepower vehicle — $20,000.

"It is a railroad and industrial legacy," Green said. "It's important to preserve these things so people can understand the impact they had on the community."

Between 1941 and 1959, the locomotive traveled between Boston and eastern New York. Then it was sold to the Holyoke Water Power Co., Green said.

For now, the ElectroMotive sits on a reserve track in North Adams awaiting repair and rejuvenation, which could take a couple of years, depending on the fundraising, Green said.

As for the ongoing summer weekend scenic train rides to North Adams and back, Green said they are averaging about 150 riders every weekend.

He added that the scenic railway is on the lookout for more volunteers to staff the weekend rides.