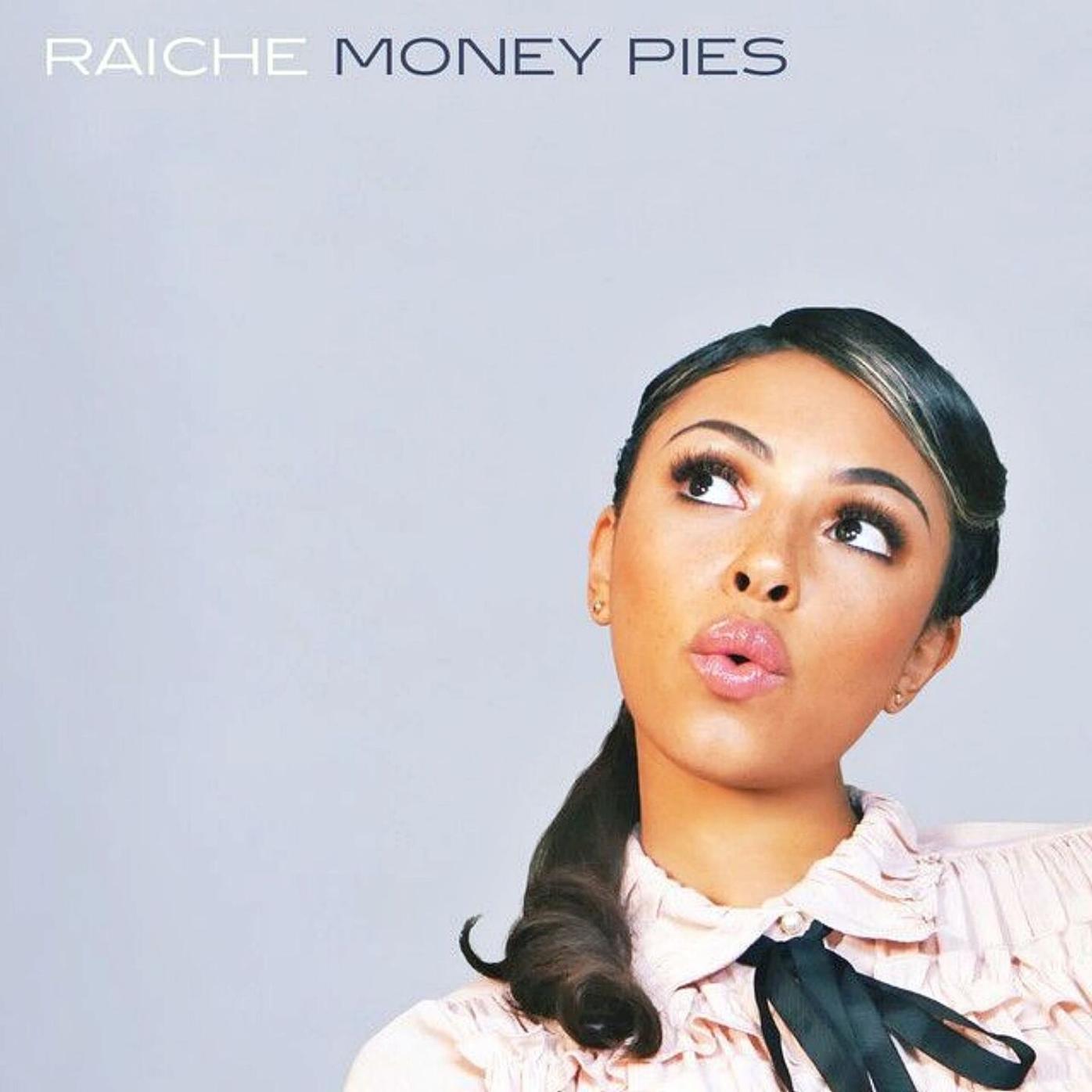 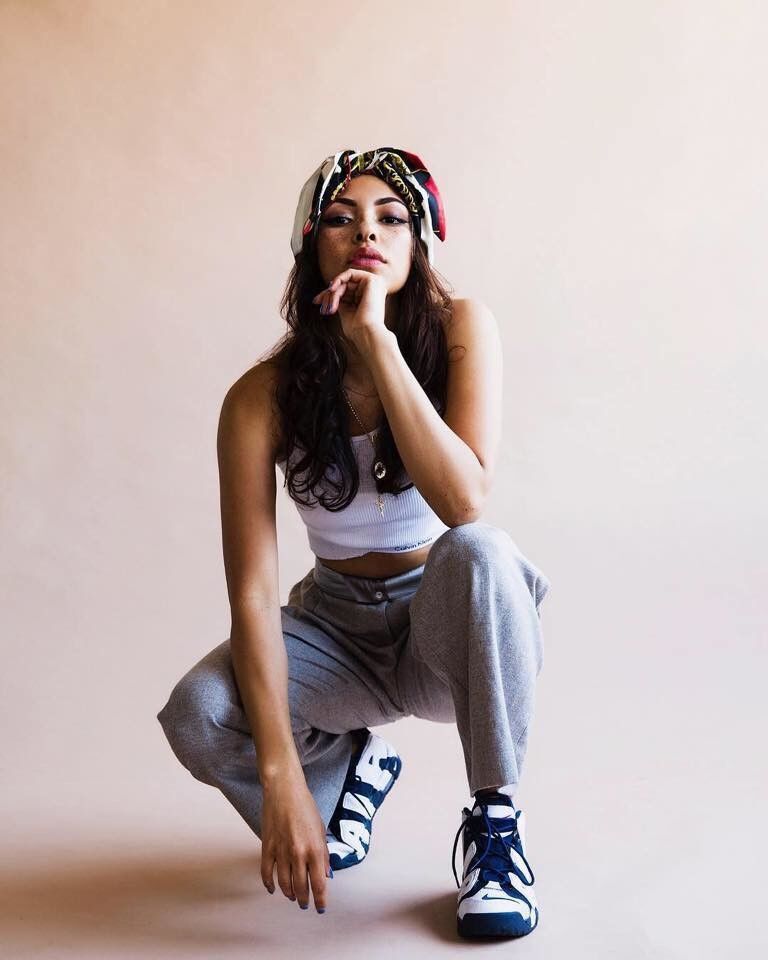 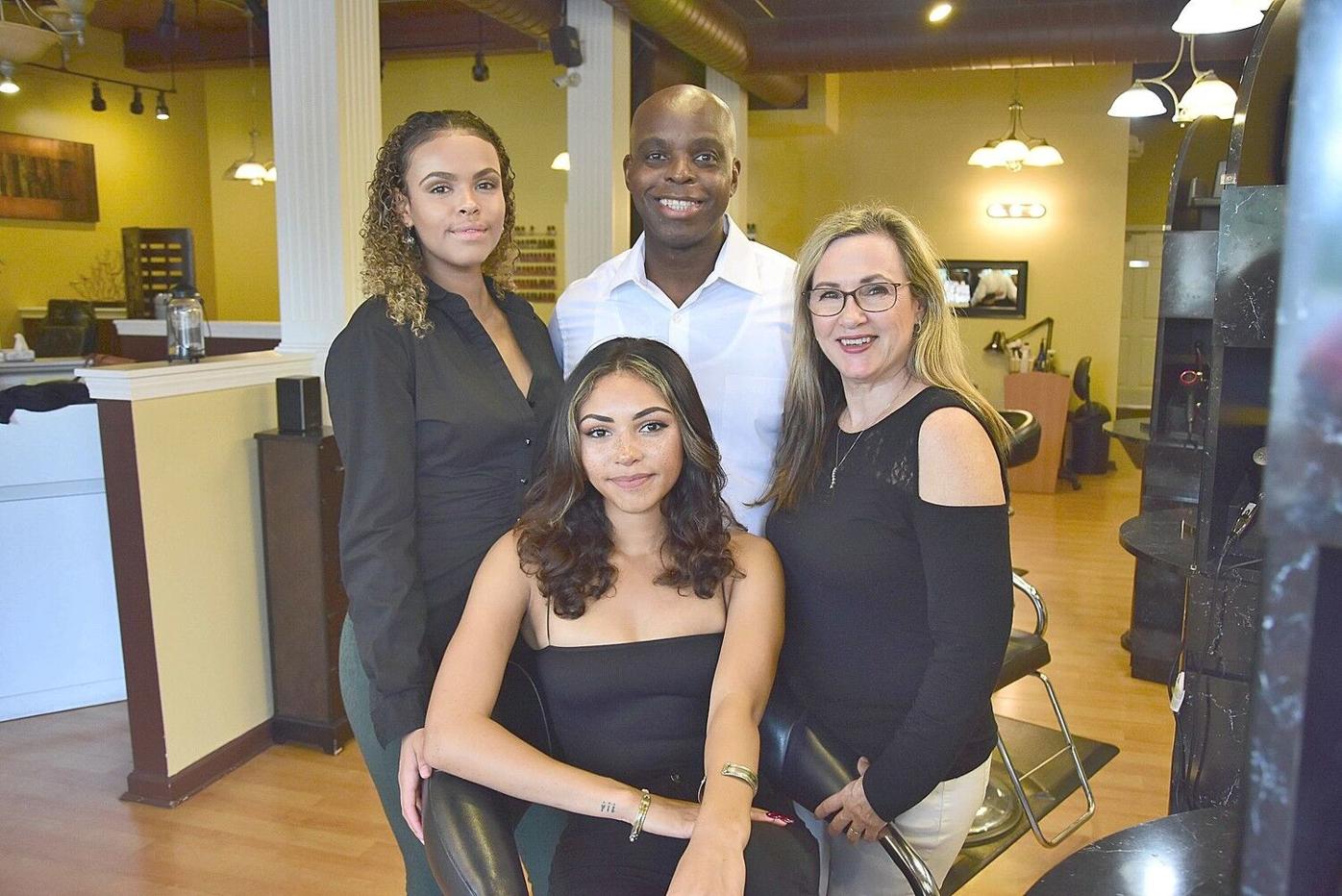 Raiche Wright of Pittsfield, with her family. From left are her sister Madison, father Richard and mother Kelie pictured in Essencials Day Spa in Lenox, which Kelie runs. 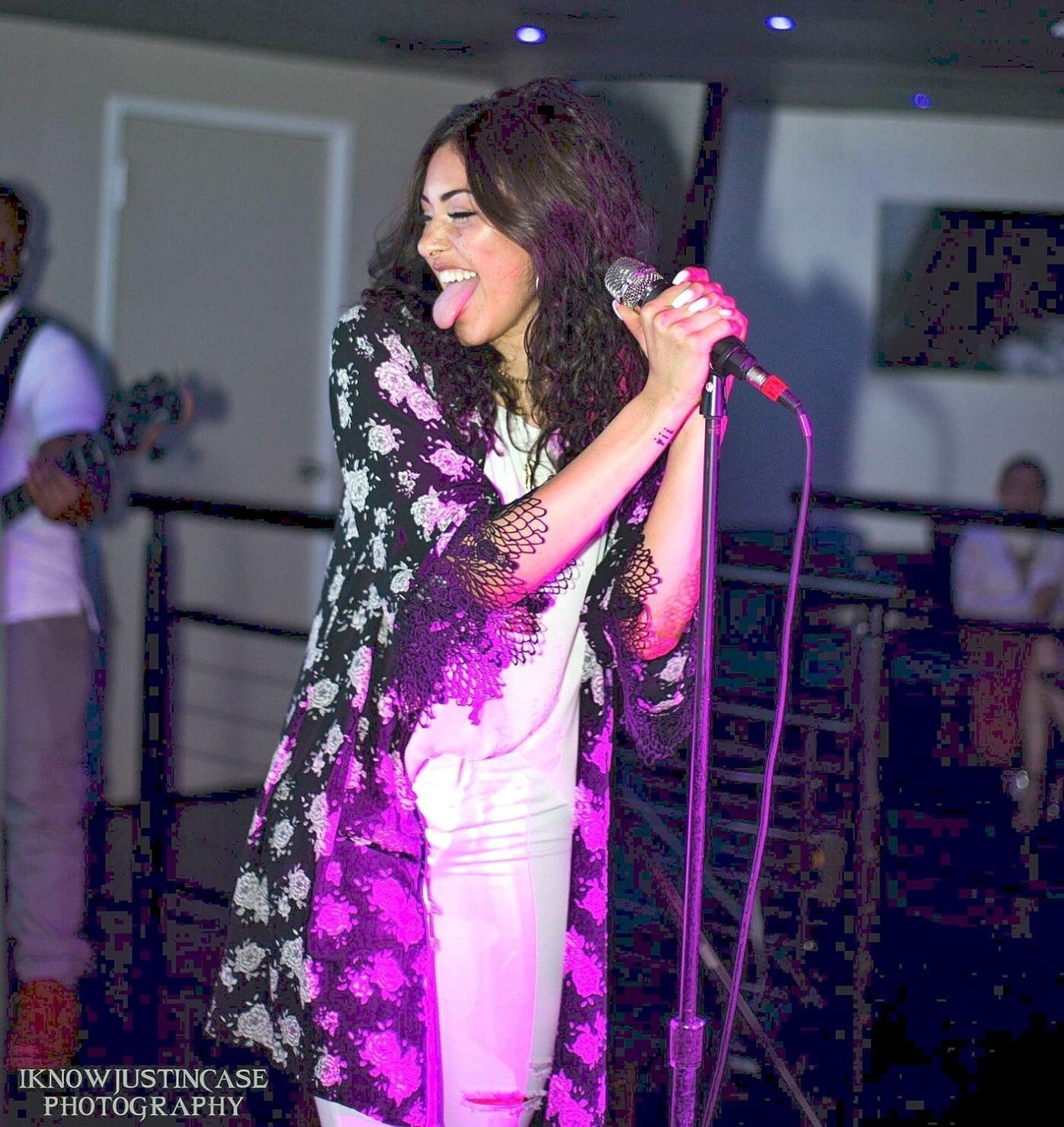 Raiche Wright of Pittsfield, with her family. From left are her sister Madison, father Richard and mother Kelie pictured in Essencials Day Spa in Lenox, which Kelie runs.

LENOX — Though her first single is titled "Money Pies," pop singer Raiche didn't cook up the Berkshires' song of the summer with only the green stuff in mind. Sustained hard work is the ingredient to success that this Pittsfield native truly obsesses over.

"What drives me and what I constantly have on my shoulders is: Am I working hard enough?" the 22-year-old said. "Because I want to make it, and I don't want to stop until I do."

To some degree, she already has. In December 2017, Raiche (real name: Raiche Wright) announced that she had signed with Atlantic Records, the 70-year-old label that can claim stars such as Bruno Mars, Cardi B and the late Aretha Franklin. "Money Pies" (released by Genre Defying Entertainment/Island Prolific) hit radio stations and streaming services on July 26, and a music video is due out within the next couple of weeks. Live 95.9 (WBEC) has had the song on regular rotation, a rarity for a local artist, according to radio host Bryan Slater. The station enjoys showcasing Berkshire talent but also worries about setting a precedent that leads to getting flooded with local musicians' inquiries, Slater said. In Raiche's case, however, the song was too catchy to ignore.

"This song is good," Slater said by phone on Thursday.

On Tuesday night, Raiche was in the "lovin'" phase, spending time with her 25-year-old sister Madison and her parents, Kelie and Richard, at Essencials Day Spa in Lenox. Kelie owns the 30-year-old parlor where Raiche said she first learned to "hustle." It's also where she began to gain traction in the music industry.

After graduating from Lenox Memorial High School in 2014, Raiche had wanted to attend Full Sail University in Florida, but Essencials was in financial trouble. Five of the company's 12 employees had left abruptly in April 2014 due to a roughly 30 percent decline in the spa's business that year, according to an Eagle report.

"It was really tough for us at that time," Kelie recalled.

Madison, then a student at Suffolk University in Boston, had to return home to work the front desk.

"She worked for a year for free," Kelie said.

Madison received some loans and eventually went back to school, earning her bachelor's degree, but Raiche never got to go to college. She worked for the better part of three years at Essencials.

"She helped us. It was a team effort. It was a family effort. We finally are getting back on our feet," Kelie said.

Raiche stayed busy at Essencials. During her senior year of high school, she started recording videos of herself covering famous songs.

"I lost a huge friend group, and I didn't really have much to do, so I kind of turned to that as my outlet," she recalled while sitting in one of the spa's chairs.

Her old friends had discouraged her from posting the videos online, but once they were no longer around, Raiche's attitude changed.

Singing wasn't anything new for Raiche. During her youth, her mother was a worship leader at Pittsfield's Reigning Love Church. Kelie started bringing Raiche to vocal practices when she was about 6 years old. Madison was also strong musically.

"They were in this together at the beginning. They would sing at Marketplace and Red Lion Inn," Kelie recalled.

Raiche didn't spend much time honing her singing skills in school, though. She quit chorus early on.

"I did it like three times. You had to wake up so early," she said.

Much of her musical development occurred outside the halls of LMHS, including during a Music in Common program that exposed her to a variety of different cultures. By then, she had developed a wide range of musical tastes. Early in life, she was exposed to gospel artists such as Kirk Franklin. Later on, she had a "dark little rock-y phase" — Relient K, Secondhand Serenade.

"Goodness," she said, shaking her head.

But for her covers, Raiche chose popular artists such as Adele and Ariana Grande. Essencials was her favorite place to record.

"The main ones that were really good were recorded here just because the sound is really good. It echoes in here," she said.

During a short stint living in Boston, Raiche met Khari O'Connor, also known as DJ Knock Out, at a club one night. He started following her on Instagram. When Raiche returned to Pittsfield, she began posting videos again. O'Connor saw one of her covering Ariana Grande's "Love Me Harder."

"This is something I haven't seen in a while," O'Connor recalled thinking of Raiche during a telephone interview on Tuesday, citing her tone and look on camera.

He could also intuit something else: her professionalism.

"She was raised well," he said.

He decided to schedule a meeting with her and a group that eventually became her Genre Defying Entertainment production team. She was subsequently featured on AraabMuzik's "Chasing Pirates"; she made a demo EP of cover songs that O'Connor later presented to Prince Charlez, too. Intrigued, he and Raiche began working on "Money Pies" about a year ago in Atlanta, where Raiche has now recorded roughly two albums worth of music. For "Money Pies," they exchanged ideas about different word choices that conveyed Raiche's story.

"I don't have much money. I'm going back and forth working for my mom still because her business needs help. Obviously, I would rather be going to school or maybe even just living in Boston, but that wasn't possible for me. I had to come home and help out my family, so I think it's really the mindset of working really hard for what you want while staying humble," she said of what inspired "Money Pies."

Madison accompanied Raiche to Georgia, serving as her co-manager with Alyssia Gonzalez. For Madison, managing Raiche allows her to fulfill her own dreams; in school, she studied business and performing arts. Still, it wasn't easy being sisters and business partners for the first time.

"A lot of tears," Madison recalled while sitting across the room from her sister.

Now, they both feel that their relationship has grown stronger because of the arrangement.

Lana Kenyon, Richard's daughter from another relationship, also traveled to Atlanta to help out.

"It's really nice to see that all of the girls are together," said Richard, who has worked at Berkshire West Athletic Club for more than 20 years.

Raiche's parents have long seen signs of her musical talent.

"This is her path," Kelie said.

She still surprises them.

"We even go 'wow' because we haven't seen that before," Richard said.

All involved are aware of the "snakes" in the music industry.

"[There are] people that don't really care for who you are or what you have as long as you're giving them what they need, and that's just the industry," Raiche said. "You can be dropped in two seconds, and you can be best friends with this person, and it doesn't even matter."

Moving forward, Raiche is excited to get back to "workin'." The "Money Pies" music video, which was shot in Los Angeles, won't feature a certain baked good.

"It's really starting from the ground up," Raiche said of the video's message.

Within the next couple of months, Raiche will be releasing another single and, if that goes well, an album will follow. She aims to start touring soon; she'll start small.

But she's serious about preparing for the stage.

"I run on the treadmill and sing my song. I want to perform well. I want to have a good voice. I don't want to get up there and people are like, 'What?' She doesn't sound anything like the track,'" she said.

Raiche knows that she has to be patient, that she has to stay focused even as people close to her (and some who aren't) congratulate her on her work thus far. Her life isn't glamorous yet.

"It's still grimy, and I think it still is going to be like that for a while," she said.

She'll only feel like a success, she said, "when the whole world knows my name."

In her new single, Pittsfield-native R&B singer Raiche dives into handling insincere apologies from your significant other, knowing your self-worth and finding the strength to move on. Raiche is a force to be reckoned with, in more ways than one.