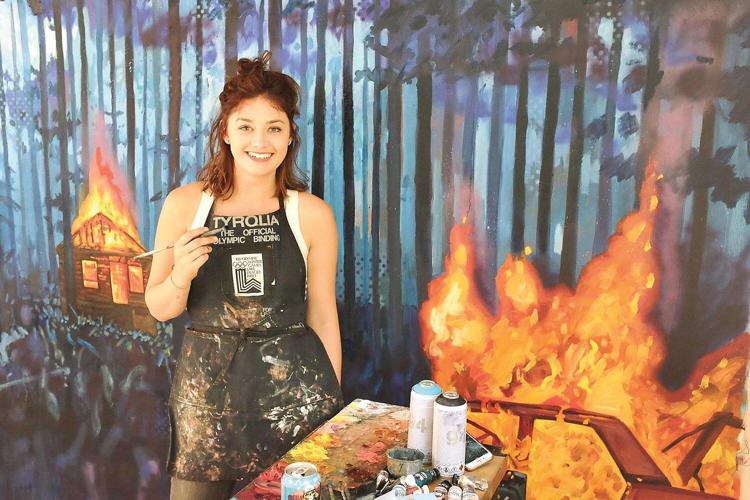 Artist Danielle Klebes said she's excited to be an artist in this uncertain time, helping to document the emotional element of the pandemic. 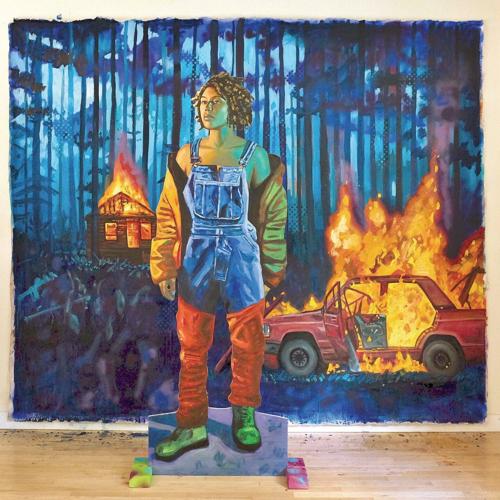 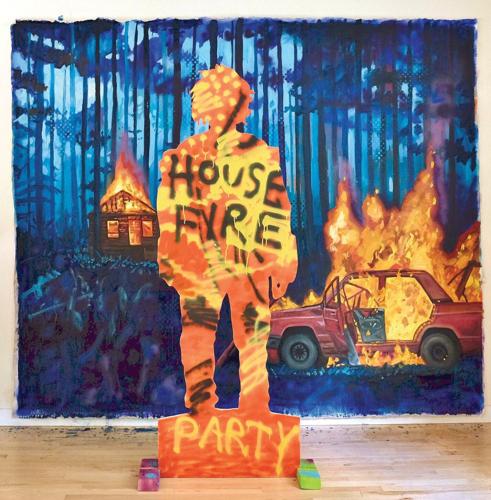 Artist Danielle Klebes said she's excited to be an artist in this uncertain time, helping to document the emotional element of the pandemic.

NORTH ADAMS — Like everyone, artist Danielle Klebes saw images of crowds of young people frolicking on Florida beaches in the middle of a pandemic. Since her work focuses on the psychology of crowds, the photos made her wonder whether these people were oblivious to danger or were just partying at the end of the world.

"It's wild because either they're completely hopeless and they don't believe in the future or they're just like, `Well, I'll be selfish,'" Klebes said. "It's hard to know which one is which. I like that. You don't know if it's terrible people or what the default thought processes are."

The work transitioned from a previous piece that featured life-sized human cut-outs, alongside paintings, depicting people trapped in disconnection but placed within proximity of each other, alone in a crowd.

With the pandemic creating an eternal present for so many, Klebes took parts of that work and mixed them with new aspects to align with the country's current reality.

"I think before the figures were more hopeful, even though it was supposed to be cynical, even though the point of it was that utopia doesn't exist," she said. "They had a more joyful, idealistic view of the world. And I think the newer ones are quite a departure from that."

They also represent Klebes' conclusions after long contemplation about the place of the artist in a world facing real disaster and causing people to buckle inward while facing an unknown future. Klebes recalls seeing a meme online that had artists declaring themselves essential workers and the rest of the world responding with eye rolls.

"I related to that," she said. "It felt really pointless because everything else felt more. I guess it's like if you look at the hierarchy of needs, art and culture come in after you have shelter and food and water and not a pandemic."

But she worked her way through this deflation, coming to understand that it's not the in-real-time commentary that art offers that proves its importance during this pandemic.

"After this is over, when you're looking back at documentation, I think art can be a more relatable, more real form of documentation than other things because it captures an emotional element and it captures a state of mind," Klebes said. "I've shifted to being really excited to be an artist at this time. But definitely right at first, it was a strange identity crisis."

The context of art now might not be apparent until sometime in the future. In the meantime, the artist does what the artist has to do and worries about a purpose being understood later on.

That doesn't mean some of the connections aren't already there and that Klebes doesn't see them. Klebes looked at what she had already been creating and her perception of them changed as she watched a society affected by a global pandemic. It was the same society she had attempted to represent before, but the representation had altered its meaning.

"These crowds I was making, the idea of feeling isolated in a crowd, all of a sudden, you can't be in a crowd," she said. "The ways you're interacting with people over Zoom, where you see a bunch of people back together, and then you're so aware that everyone's alone, it changed the whole context. So, it is a really strange time to be working with crowds as subject matter."

The pandemic had its effect not only on Klebes' work, but her life, as well. Prior to the escalation, Klebes had planned out a year of art residencies, a transient existence in response to disappointment in her personal life, a life on the road.

"Doing that for a year was my plan, and then everything got canceled after March," said Klebes, who is currently living in North Adams. "Suddenly, it's like, no house, no place to go to. I'm 31 years old, going back and staying with family, and visiting friends is hard during a pandemic. All of the logistics of that were really tricky."

The entire country was waiting for something and Klebes was no different. In that time she witnessed the unrest in various parts of the country and tried to figure out not only what she could do about it, but where she could do it.

"Everything came to a halt for the art world, which makes total sense," said Klebes. "But it definitely was like an identity crisis at the beginning and then shifted for me to focus on the people who have a much bigger problem right now."

At least part of what Klebes was waiting for arrived in the form of the show at Installation Space — the first Klebes has had all year. Viewings will require COVID-19 precautions, including limits on visitor numbers, reflective of the situation the show itself examines.

For Klebes, it's the first sign that there may yet be a future.

"I think if I'm concerned about not having anyone to look at my paintings, it reminds me of the posters we see, the juxtaposition of the people holding `I need a haircut' next to `Stop killing us.' It put my own problems in perspective, that my house is not burned down. It has made me more aware of the things that are still going well, and the fact that I have a voice that I can use for the benefit of other people ideally."