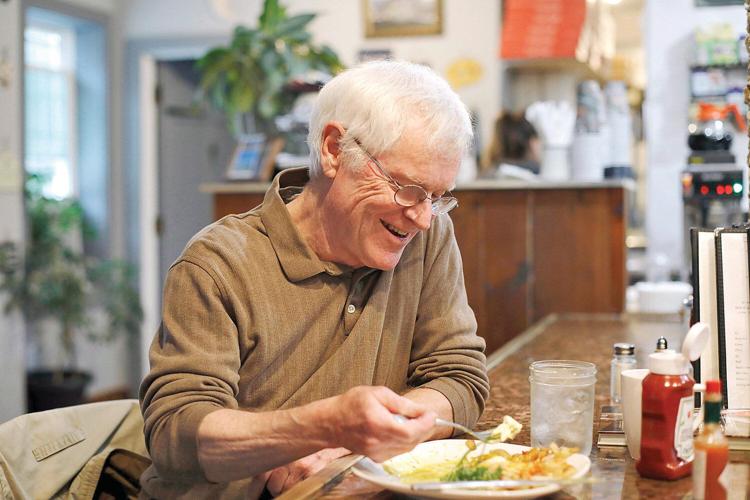 Beemer thought he was going to become a teacher during his graduate school years at Cornell University, but decided he loved working with his hands building and working outside. 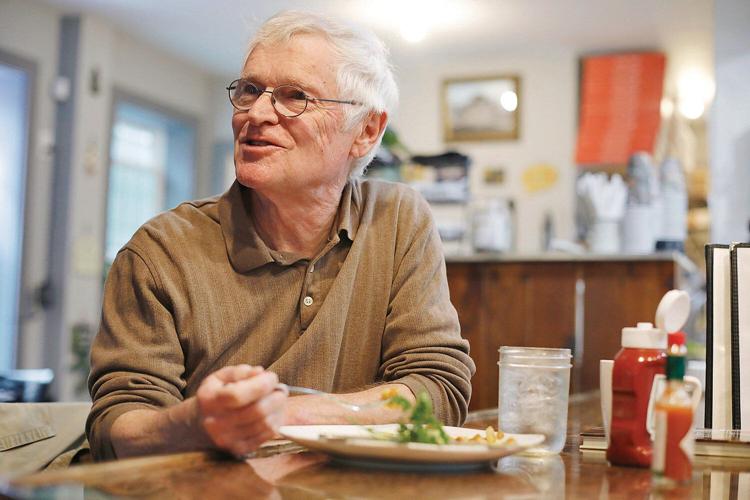 Will Beemer owns and operates the Heartwood School for the Homebuilding Crafts in neighboring Washington with his wife, Michele. 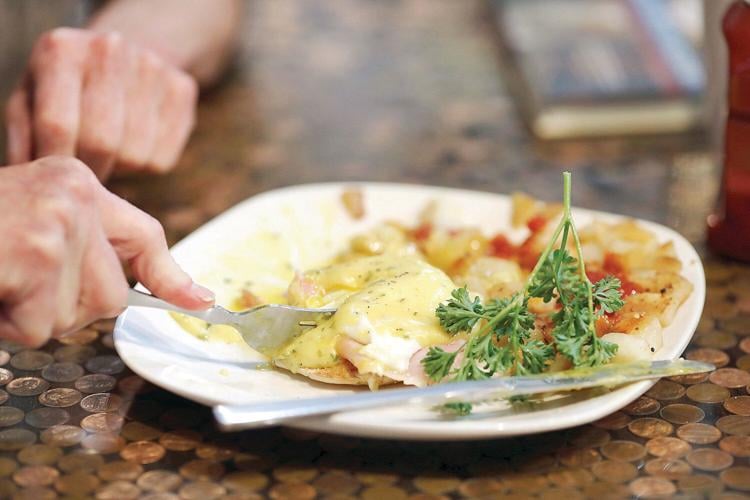 Will Beemer gets eggs Benedict for breakfast at the Becket General Store.

Beemer thought he was going to become a teacher during his graduate school years at Cornell University, but decided he loved working with his hands building and working outside.

Will Beemer owns and operates the Heartwood School for the Homebuilding Crafts in neighboring Washington with his wife, Michele.

Will Beemer gets eggs Benedict for breakfast at the Becket General Store.

BECKET — Dense forest lines much of the road near the Becket General Store, a hilltown breakfast hot spot along Route 8. But it's a different kind of timber framing that consumes Will Beemer's world. The Becket resident owns and operates the Heartwood School for the Homebuilding Crafts in neighboring Washington with his wife, Michele. For more than four decades, the school's instructors have helped participants learn how to build energy-efficient structures. This year, Heartwood is once again focusing on timber framing, the centuries-old post-and-beam construction style that uses mortises, tenons and pegs for joinery.

"We have our own love for the craft, and then being able to impart that to other people is the real thrill of it," Beemer said just before a plate of eggs Benedict and home fries arrived at the table on a recent Friday morning at the Main Street restaurant.

The school's latest series of programs is set to begin May 13 with a weeklong roof framing course. The following week is cruck framing; a four-week timber framing intensive and two weeklong timber framing courses close out the season. As of breakfast time on this particular Friday morning, there were eight spots remaining in the final timber framing session in August. The others are full or close to it. Participants typically hail from around the country and beyond, staying off-site. Interns from Arizona and Washington will live on-site this summer, as will a chef. To many's delight, Michele used to have cooking duties, but she is now concentrating on managing the office. Some of her recipes live on in "Lunches at Heartwood," a 100-page cookbook available for purchase on the school's website.

"I think that's why a lot of people repeatedly come to Heartwood, is because of the lunches," Beemer said.

The home-building stuff may have a little something to do with it, too. Traditionally, the school offers courses in the fundamentals of woodworking and house-building in addition to its more advanced classes.

"Novices would get a bunch out of those programs," Beemer said.

The broader curriculum will likely return next summer, Beemer said; for personal reasons, they have run an abbreviated schedule this year and last that primarily features timber framing. In those sessions, Beemer estimated that about half of the students are professional carpenters hoping to expand their skills, while the other half are owner-builders who want to complete their own barns, workshops, studios or other structures. All use hand tools to generate frames that are usually dismantled and trucked to their owners' properties, which may be as far away as California. The lack of power tools makes for a peaceful experience.

"There's the beauty of creating something with your hands," Beemer said.

Society misses out when it overlooks the trades, according to Beemer.

The Wausau, Wisc., native thought he was going to become a teacher during his graduate school years at Cornell University.

Beemer moved to Arizona, where he collaborated with architect Paolo Soleri on the Arcosanti Project, Soleri's prototype arcology to test urban design ideas. He eventually met Elias Velonis, who founded Heartwood in 1978. In the late 1970s, when Beemer was preparing to leave Arcosanti, he asked Velonis if he could come work at Heartwood. Berkshire County wasn't foreign to Beemer. During his Cornell years, he toured with a band that stopped at the Music Inn.

"When I had a chance to come back to the Berkshires, I jumped on it," Beemer said.

In 1980, he and Michele joined Heartwood as teaching apprentices. Timber framing was experiencing a revival in the decade before the Beemers arrival due in large part to the rise of structural insulated panels.

"Previously, you had to build another house around the timber frame to hold the insulation. You were building a house within a house, so it was redundant," Beemer said.

Now, foam panels could be applied to the outside of a timber frame.

"All of a sudden, we had an affordable, quick-to-apply, energy-efficient envelope to put around the timber frame," Beemer said.

Beemer also cited TV shows and the back-to-the-land movement as reasons for the uptick in timber framing. That trend lasted until 2008, Beemer estimated, when the housing crisis struck.

"Only the very wealthy could afford timber frames anymore," he said.

"We're building better houses, but it's gotten much more technical," Beemer said. " ... The building codes have become more stringent. They've got to understand the energy codes, especially. So, it takes a lot more research and homework."

Timber framing persists in the Berkshires, though, and has a long history in the county. Arts buffs will recognize the building style at Jacob's Pillow Dance and Hancock Shaker Village. The latter served as the setting for the first Timber Framers Guild meeting in 1985, the same year that the Beemers took over Heartwood after Velonis left to pursue other projects. Through the guild, the Beemers met more than 200 other timber framers.

"That's when [Heartwood] started going from just a house-building school to a timber framing school, so we expanded the program to include courses that no one else offers like timber frame engineering and scribing and some of the more esoteric topics," Beemer said.

In 1999, Beemer became co-executive director of the guild, serving in that capacity for 11 years. Before then, he would help design and build entire homes, working on them during the winter. Now, it's just timber frames. The school's instructors will lead the production of four this summer. Students are generally enthusiastic.

"Everybody wants to be there. They want to learn it, and we can see a noticeable improvement in just five days between people's abilities to learn how to sharpen a tool, learn how to cut wood," Beemer said. "A very rough job on Monday or Tuesday turns into a really good job by Friday, and it just comes with practice."

Putting up the frame is exciting.

"You get a real sense of accomplishment. I don't think we've ever had a frame that we haven't put up at the end of class," Beemer said.

In addition to his work at Heartwood and other projects, Beemer assisted in building Dalton's Pine Grove Park Pavilion and the colonnades and balconies at Tanglewood's Ozawa Hall.

"They're all pegged timber frame. It isn't quite obvious when you look at it," he said.

Beemer doesn't get to play much music himself these days, but he does spend time brewing his own beer. He also rafts in Grand Canyon National Park every few years and kayaks in Maine.

"But you know, every time we go somewhere, I always come back here and love it here. I'm always glad to come back. We've got the best water to drink out here, and the best country and culture," Beemer said.

And some good wood?