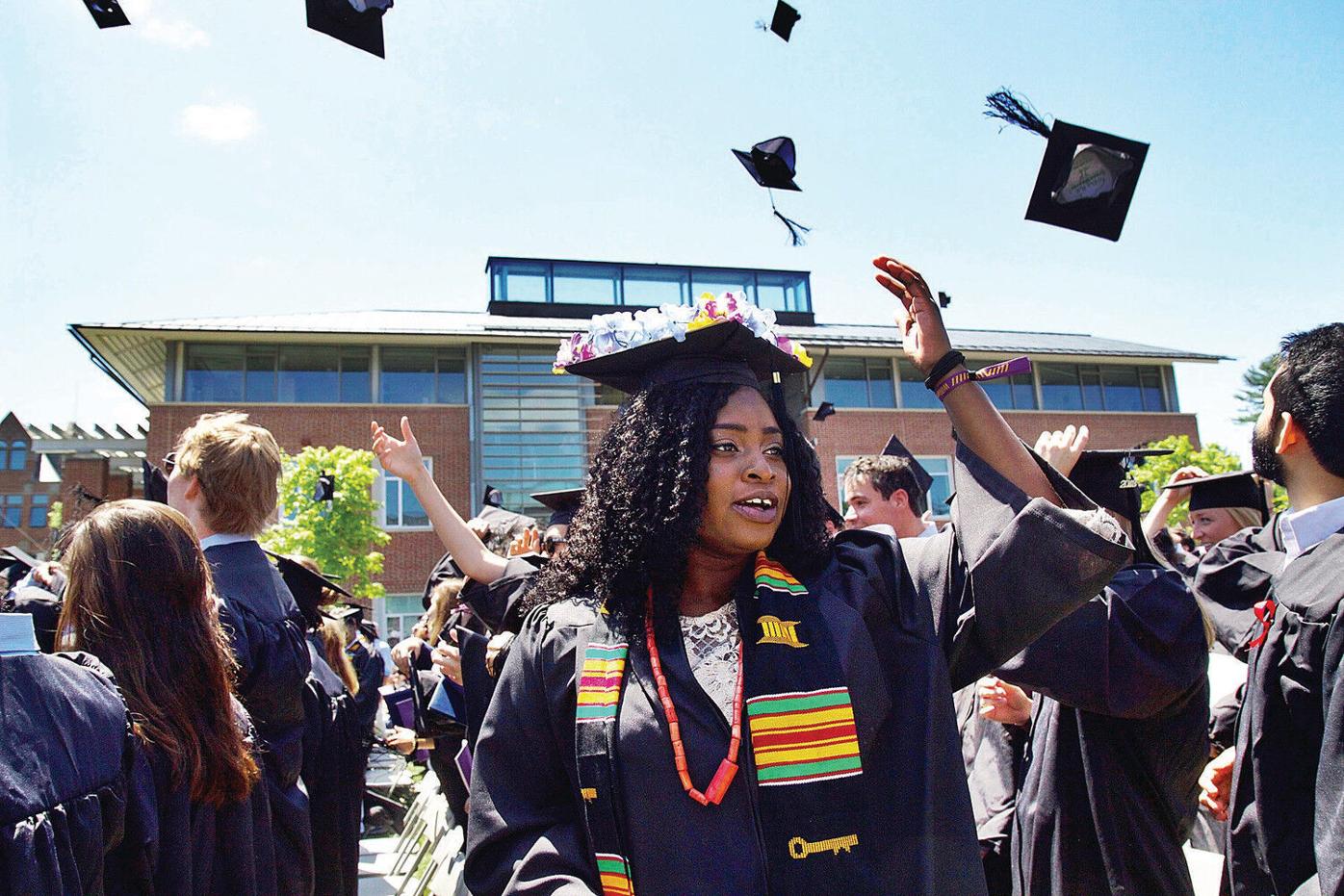 Valerie Oyakhilome holds onto her carefully decorated graduation cap as her peers toss theirs at the end of the Williams College 2018 Commencement ceremony Sunday. 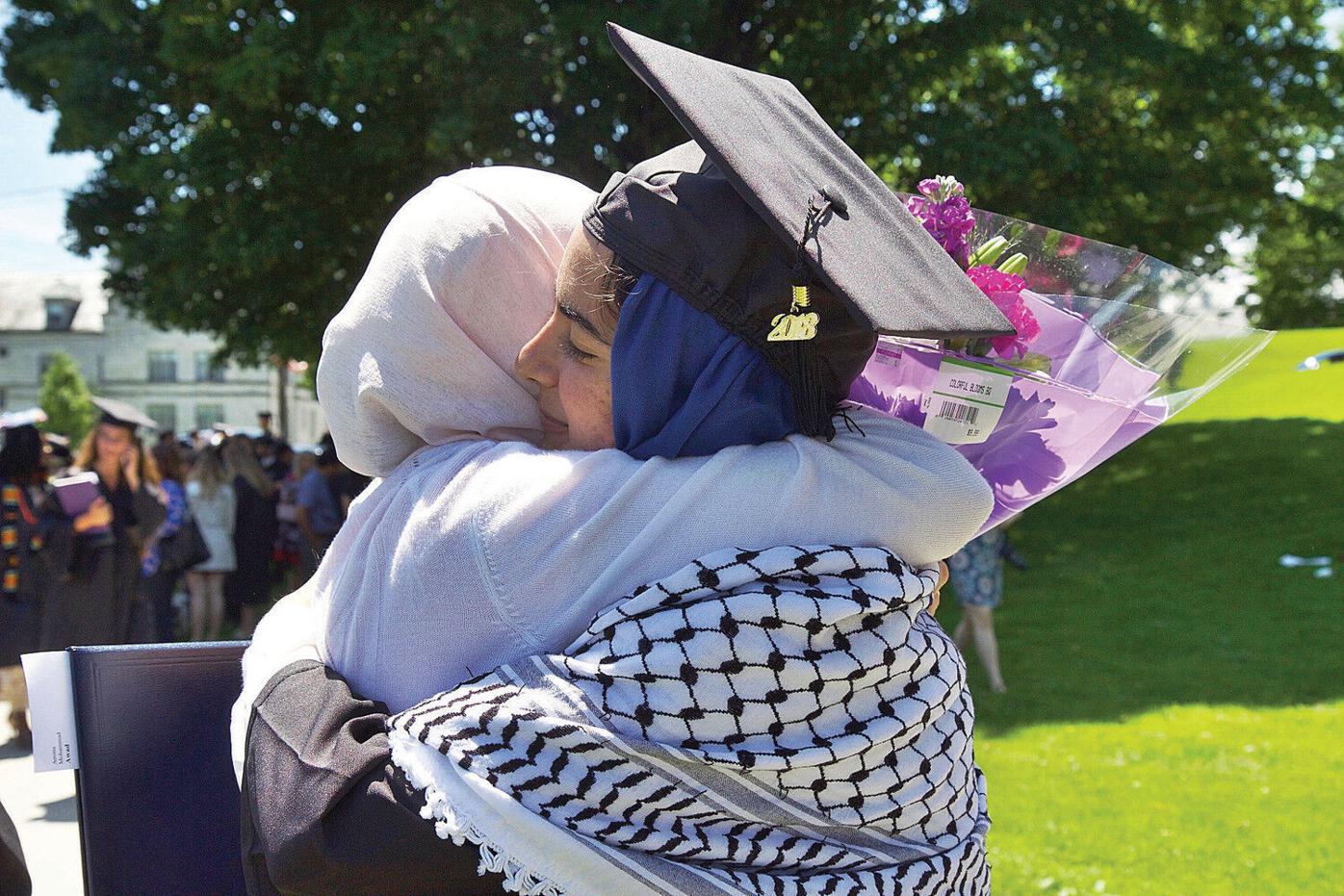 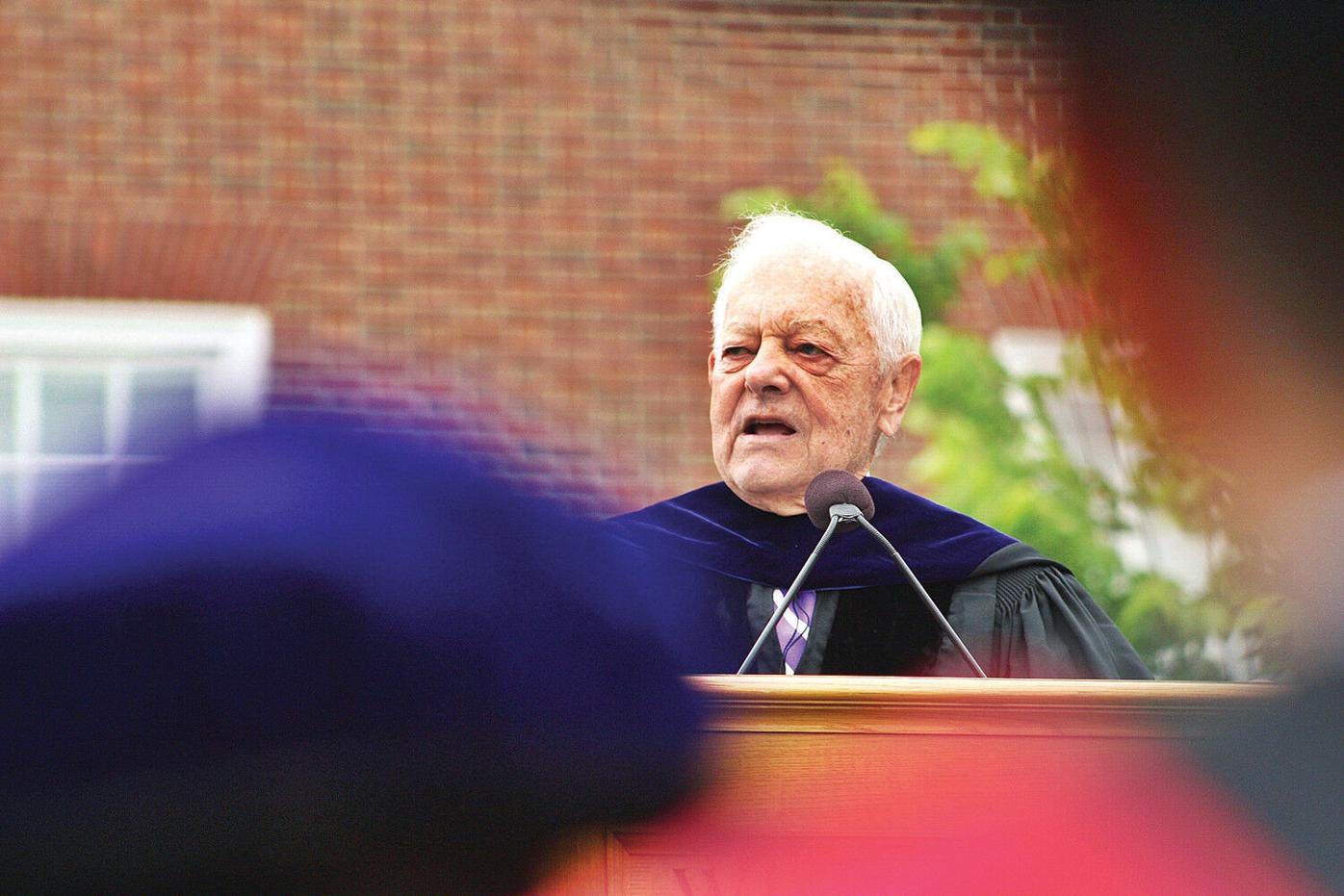 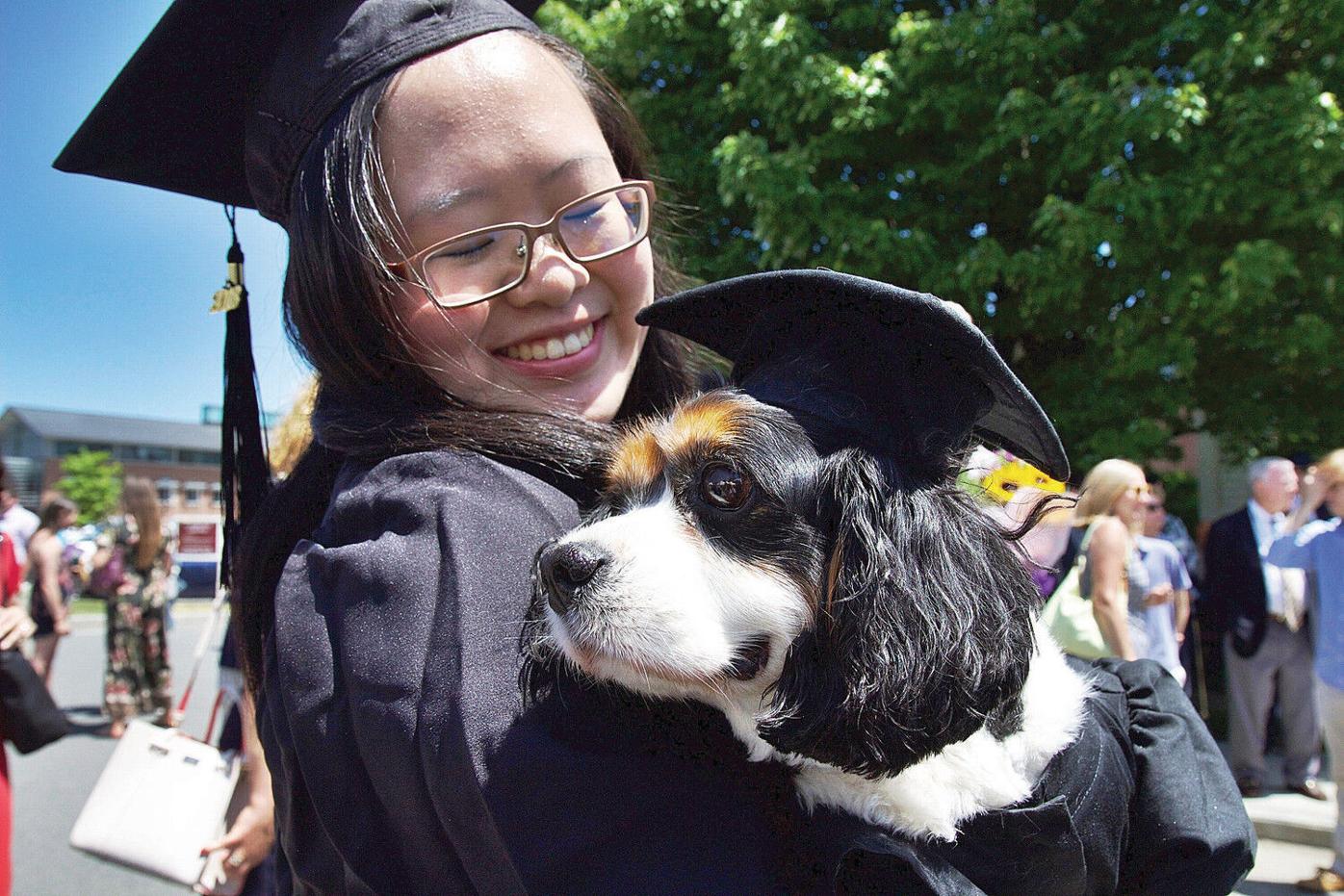 Williams College 2018 graduate Wei Li holds her emotional support dog Jay Jay on Sunday after the commencement ceremony. Li said she got permission for Jay Jay to accompany her up to the stage when she received her diploma.

Valerie Oyakhilome holds onto her carefully decorated graduation cap as her peers toss theirs at the end of the Williams College 2018 Commencement ceremony Sunday.

Williams College 2018 graduate Wei Li holds her emotional support dog Jay Jay on Sunday after the commencement ceremony. Li said she got permission for Jay Jay to accompany her up to the stage when she received her diploma.

As the Williams College Class of 2018 gathered in the Frosh Quad Sunday, nothing about the overcast, quiet morning suggested drama. The seniors lined up along the brick walls and helped adjust each other's caps, sipped coffee and murmured amongst themselves beneath the recently leafed-out trees.

At 10 a.m. though, the Berkshire Highlander Pipes and Drums sounded out the call. The students straightened into two lines. They marched, first down Park Street, then along Route 2, and finally, back onto campus on Chapin Hall Drive, right into the final stage of their college career.

Cheered on by college staff, flower-bearing and cow-balloon wrangling family, friends and the occasional dog, the 450 graduates found their places in the middle of the Library Quad. There they were welcomed by Williams College President Protik Majumder, and then they were asked to risk the scary things of the world: zombies, American politics, the ocean of the world.

Phi Beta Kappa speaker Jackson Barber tried to give his peers some perspective. "Jesse Eisenberg would never have found love in Zombieland had he whiled away the hours moping about the collapse of civilization," he said. Barber asked the Class of 2018 to be vulnerable in the face of hardship.

Even without a zombie apocalypse, CBS News reporter Bob Schieffer reminded the students, "You are graduating into a dangerous world. America is more divided than any time since 1968." That's when the award-winning journalist witnessed the Vietnam War riots at the Democratic National Convention in Chicago.

And yet, as Schieffer quoted from Edward R. Murrow, "We are not descended from fearful people."

"Some of you are here today not by your own choice but because of those who imposed the greatest cruelty of man upon man in the history of the world," Scheiffer noted. "And yet, your descendants, because of their courage, and because of their persistence and their determination to stay alive, became part of the strength of the United States of America."

In a notably light tone, Schieffer offered his own history as proof of someone who made it through the graduation process at Texas Christian University and into the scary world, even if it was by the skin of his teeth.

Class speaker Brian Benitez shared his own experience of confronting his fears this past week. He retold the story of walking with friends on a South Carolina beach at 2 a.m., and suddenly feeling outside himself and swallowed by the sea.

"This anxiety of not knowing where my body ended and where the world began overwhelmed me," Benitez said. And yet, in the midst of going through a huge life change — graduating college — he said that sensation of being one with the ocean was also like ecstasy.

"Today, we are all at the sea's edge," Benitez said. "We're on the precipice of the rest of our lives and that naturally makes us feel nervous. But if the sea has taught me anything, it's that plunging into that which overwhelms you feels good because you become one with something much bigger than yourself."

For class valedictorian Anna DeLoi, going to college was a big plunge after being home-schooled for the first 12 years of her life. "This is my first graduation," she said. And what she was leaving with, she added, was a better understanding of what school really was.

"One of my mentors here — and an expert in schools and what they do — told me that she thinks the purpose of school is to help each student become more of who they are," DeLoi said. "That's something that these four years have done for many of us."

Schieffer asked students to put stock in what their four years accomplished, to have faith in the people they were becoming.

"In this age of contradiction where it is so hard to believe in anything, I urge you to believe in yourself," he told the students. Gazing upon the sea of graduation caps before him, Schieffer pointed out to the Williams College Class of 2018: "You set out to do something, and you did it."

Following Schieffer's speech, the graduates officially finished their college career and received their diplomas. Among the recipients were five local students: Keiana Ruby West of Pittsfield and Mohibullah Amin, Seema Amin, Geff Halligan Fisher and Evelyn B. Mahon of Williamstown.

Before they left, the students sang one, last, rousing rendition of their college song, "The Mountains." Then they marched back out the way they came, out of the Library Quad, along Chapin Hall Drive and onto Route 2, away from Williams College. They all moved toward the zombies, toward American politics and toward the ocean of the world, toward the new places where they'd become even more of themselves.