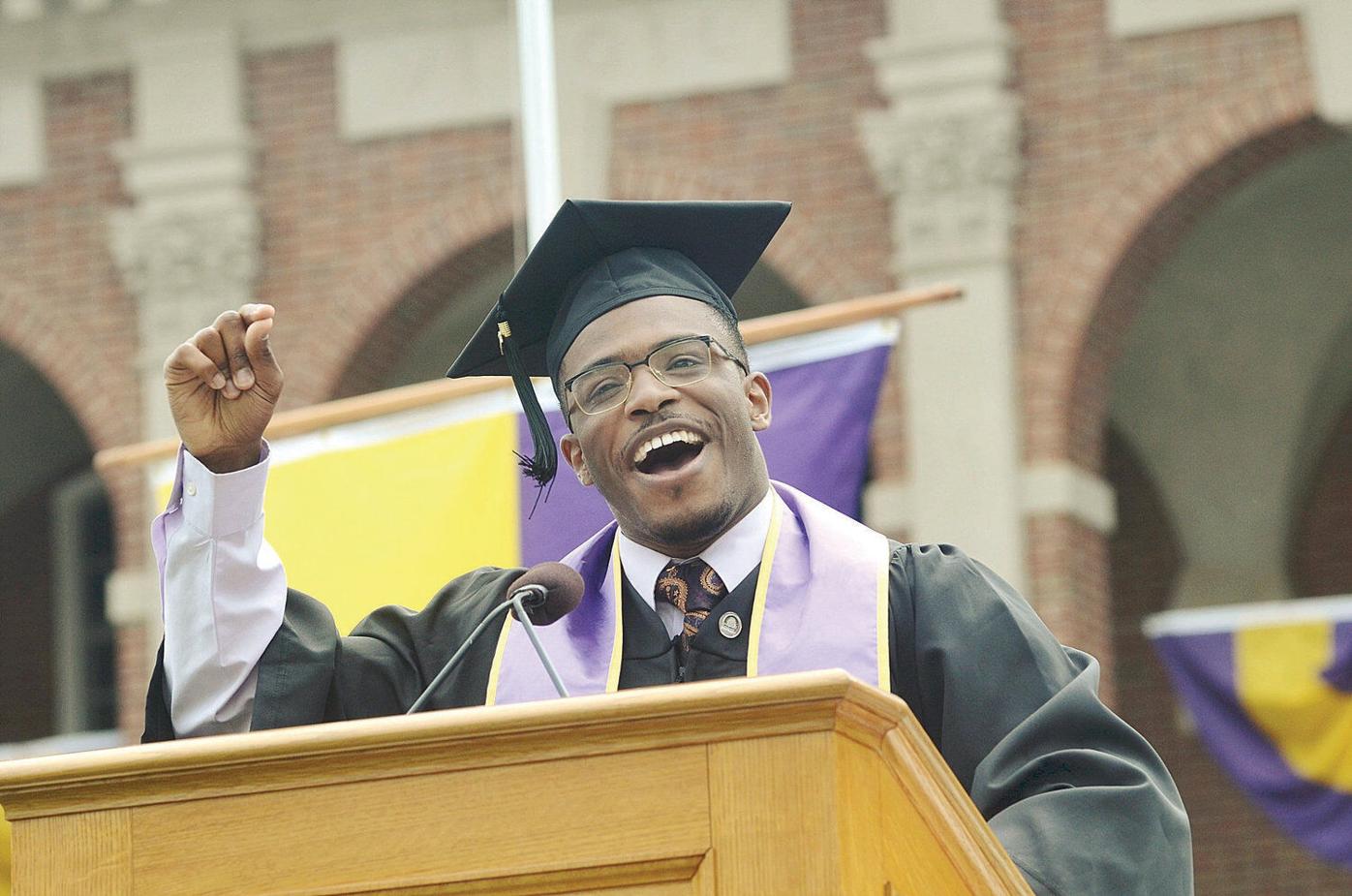 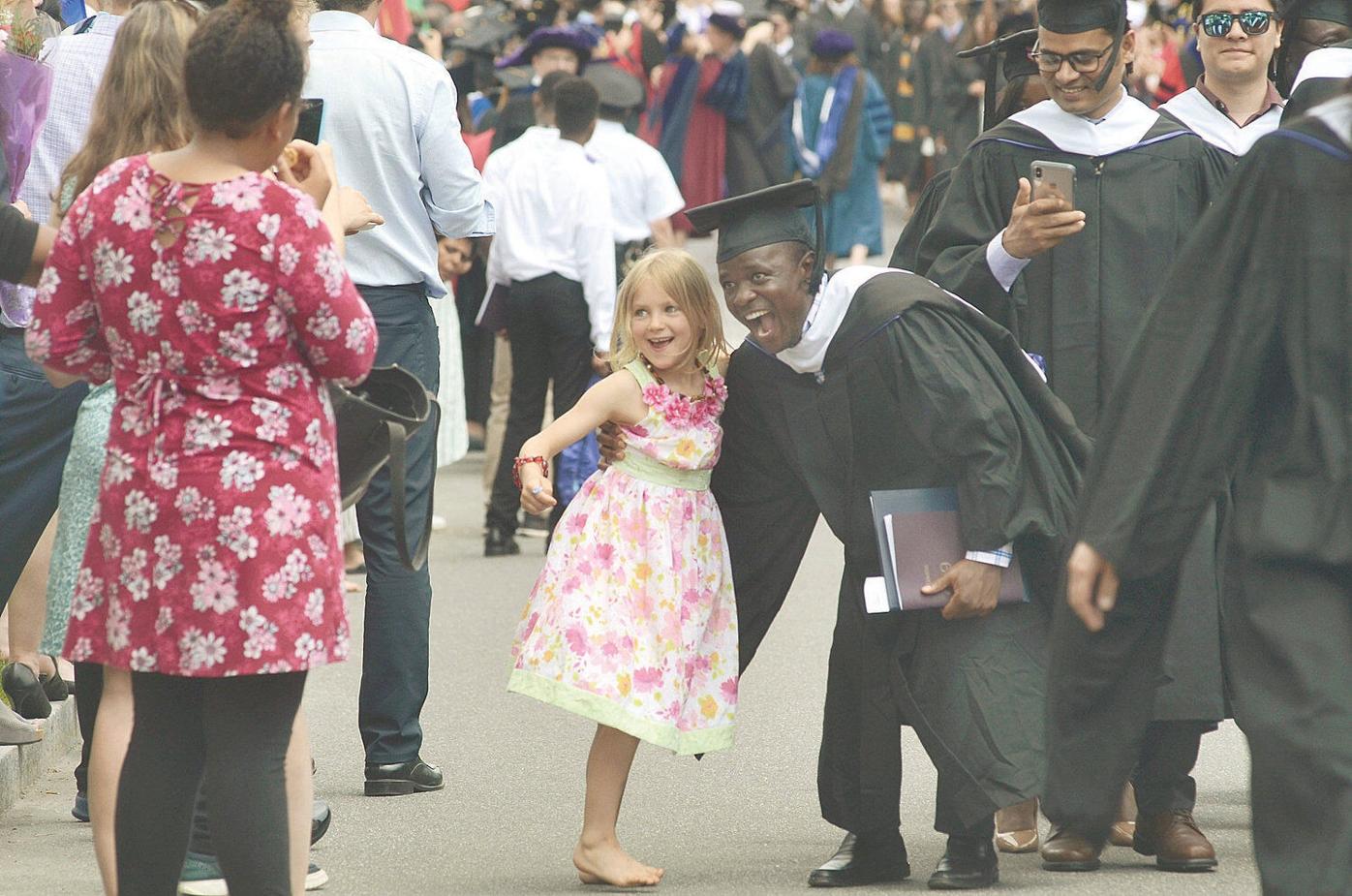 Seven-year-old Lisa Goodwin Reynolds of Williamstown greets friend Chabu Kapambwe from Zambia, who just graduated from the Center for Developmental Economics program, during the recessional of Sunday's 230th commencement exercises at Williams College. 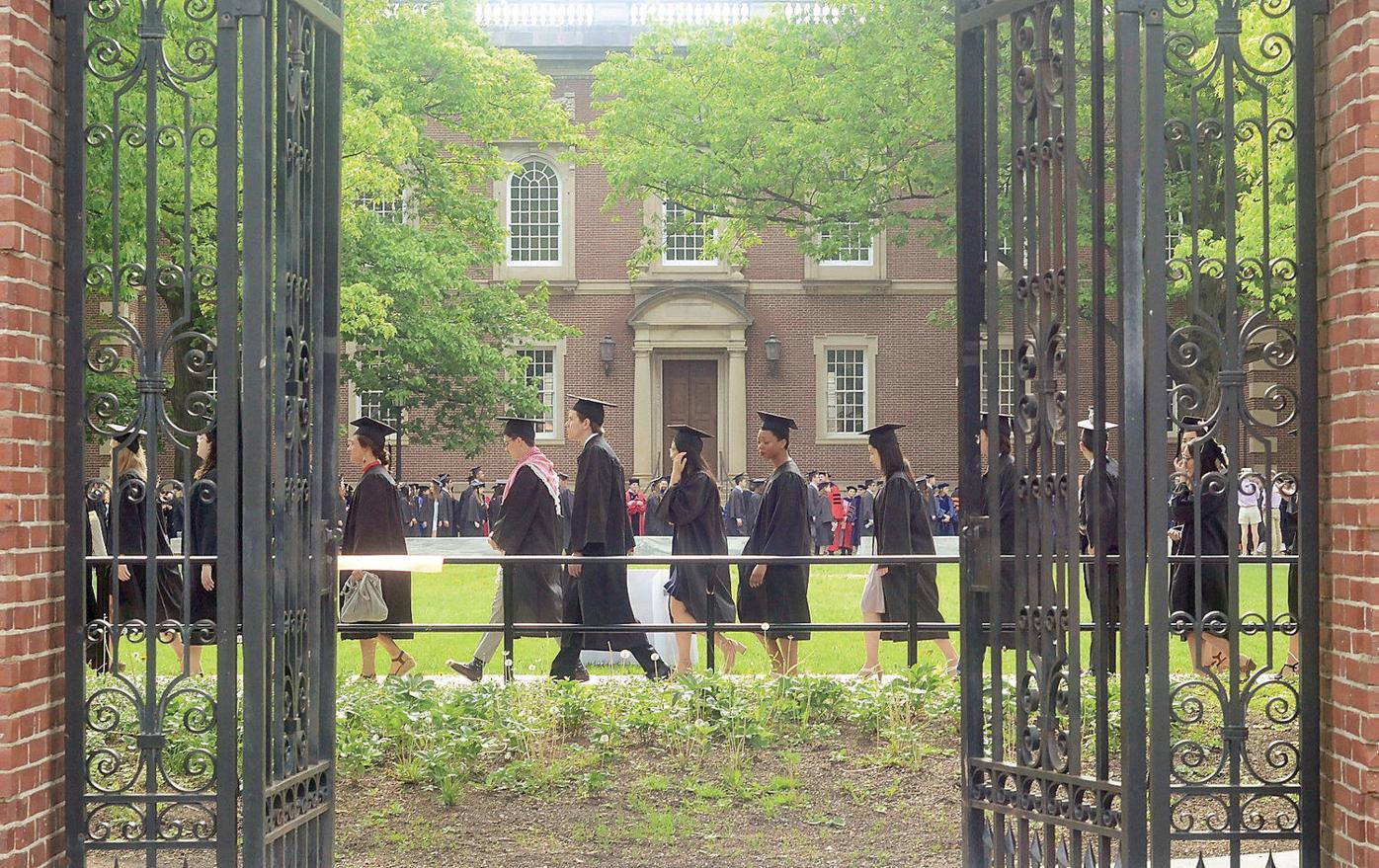 Graduates parade through the the Frosh Quad between Sage Hall and Williams Hall on Sunday before proceeding to the commencement exercises at Williams College. 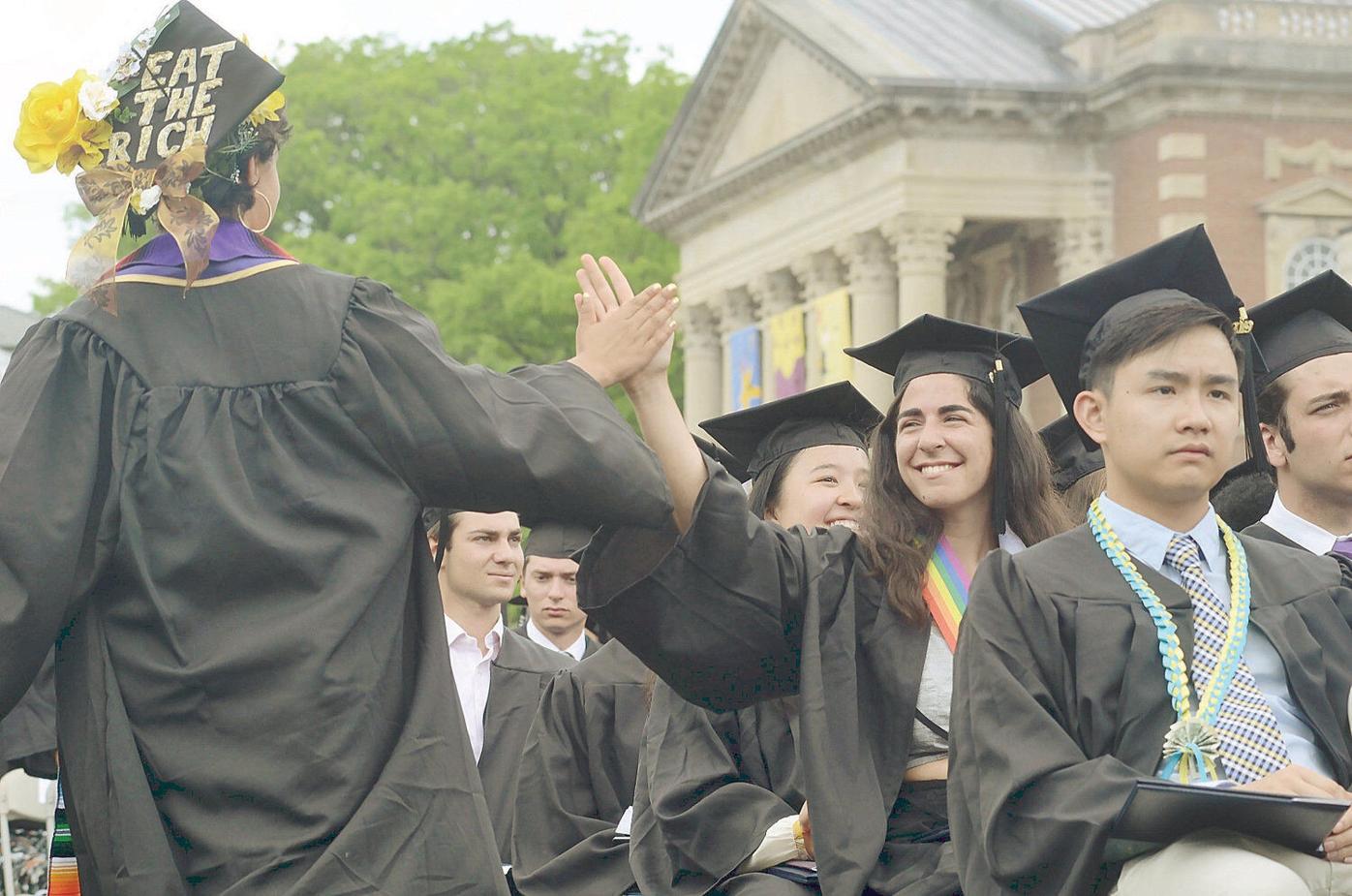 Seven-year-old Lisa Goodwin Reynolds of Williamstown greets friend Chabu Kapambwe from Zambia, who just graduated from the Center for Developmental Economics program, during the recessional of Sunday's 230th commencement exercises at Williams College.

Graduates parade through the the Frosh Quad between Sage Hall and Williams Hall on Sunday before proceeding to the commencement exercises at Williams College.

WILLIAMSTOWN — On a muggy Sunday morning, 550 graduates lined up behind the Berkshire Highlanders bagpipe corps and marched through campus to the scene of the Williams College 230th commencement just outside the library.

The skies looked threatening for a bit, but that line of rainstorms held off until a couple of hours after the conclusion of ceremonies.

After the processional, Kevin Roosevelt Moore — better known as Keb' Mo' — sang a famous and uniquely bluesy version of "America The Beautiful," accompanying himself on guitar. He was later presented with an honorary Doctor of Music degree.

The commencement address was delivered by geneticist Mary-Claire King. She is known for work that showed chimpanzees and humans' DNA differ by only 1 percent; identifying the breast cancer gene (and declining to patent the discovery so it could be used freely worldwide); and identifying causes and treatments for ovarian cancer, schizophrenia and genetic disorders in childhood. King is a geneticist at the University of Washington.

She was also presented with an honorary degree — Doctor of Science.

During her remarks, she said she didn't expect to become a scientist, but described her love for the work.

"The first and defining feature of life in science is that we want to be here," King said. "Science is fun. My field of genetics and genomics is enormous fun."

She said the reward comes in finding new connections that help define the physical world.

"The lesson of evolution is that the natural world is ordered and that people can figure it out," King noted.

She described the respect scientists share for each other and for their students, and the extremely critical eye they use to evaluate each other's work, even among their students.

"In the lab you'll hear honest responses to your ideas," King said.

And in traveling, the scientists are welcome in local universities.

"We take for granted the internationality of our world, and the irrelevance of nationality or race or the politics of one's government," King said.

"For me, using genetics to identify kidnapped children in Argentina was an obvious example," King noted.

She left the graduates with three wishes: "First, may you have enormous fun and good fortune inn your chosen field," she said.

"Third, may you be fully immersed in our society so that your brains and abilities are useful."

After the remarks, degrees were handed out to each master's degree recipients, 40 of them, and the 510 bachelor's degrees, to the occasional uproar from family and friends — and some party-poppers punctuated the proceedings.

Attendees then gathered outside the Paresky Center, eating from an impressive array of finger foods and sandwiches, and shooting lots of photos in cap and gown.

Franky Barradale was celebrating with her parents, David — who graduated from Williams in 1975 — and Debra.

Franky Barradale majored in biology, with a minor in biochemistry, and said it was not an easy journey. "It was tough," she said. "It was a lot of work."

From here she'll head to Harvard where she will pursue a doctorate in biology, which is fine with her parents, who live in New Hampshire, because it's only an hour away. To visit Williams, it was a three-hour drive.

"The pride is overwhelming," Debra Barradale said of her daughter's achievements.

Calum Ferguson had just graduated with a degree in political science, and he was catching up with his dad, still sporting his cap and gown. He was raised in Singapore by his father Ray Ferguson, who is a native of Scotland.

He said his challenges to succeed at Williams College were many.

"There were the late nights in the library, trying to find a balance between sports and studies, and the competition and pressures of an intense academic environment," Calum Ferguson said.