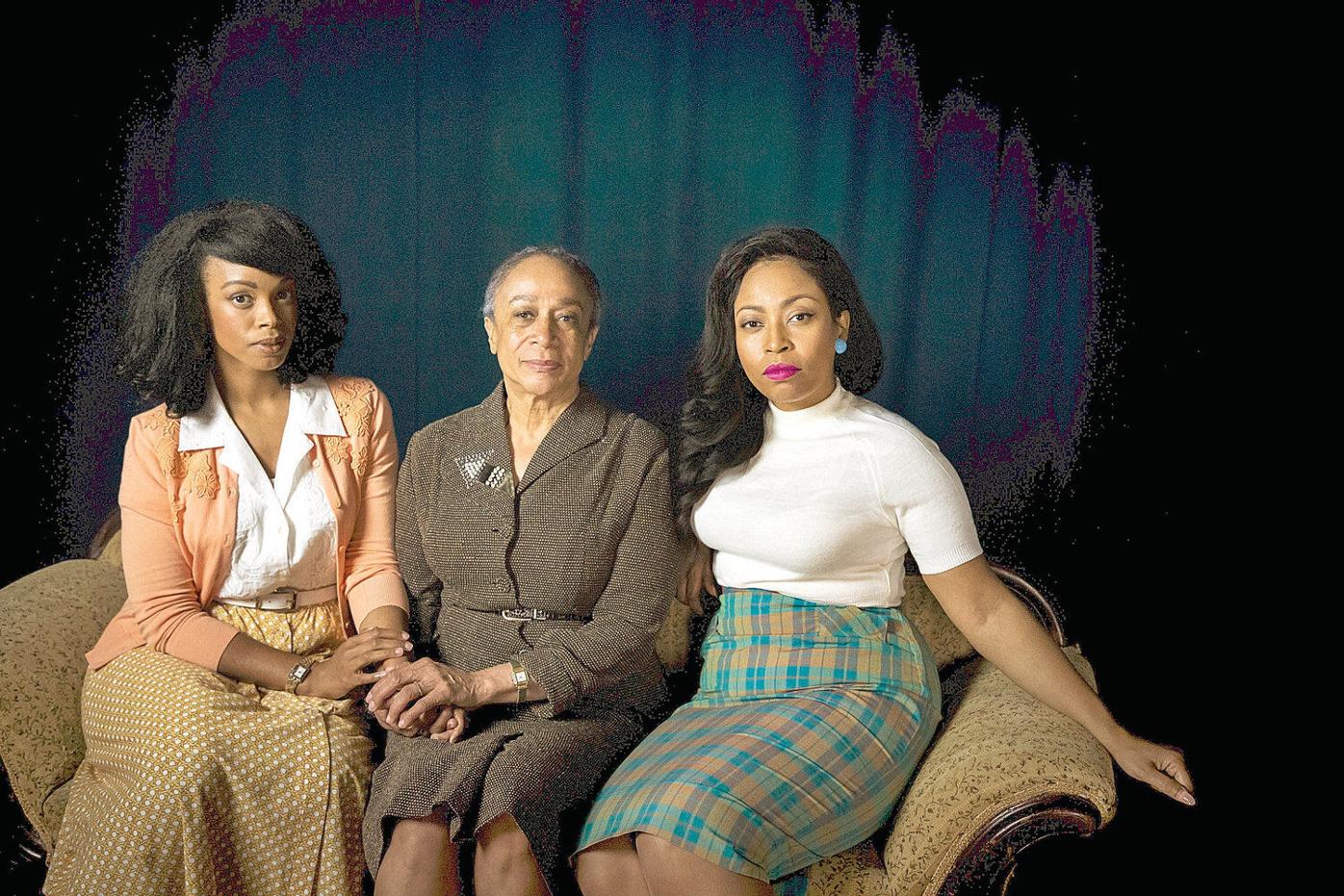 From left, Mandi Masdon as Ruth Younger, S. Epatha Merkerson as her mother-in-law, Lena, and Nikiya Mathis as Lena's daughter, Beneatha, during a rehearsal of Williamstown Theatre Festival's production of Lorraine Hansberry's "A Raisin in the Sun." 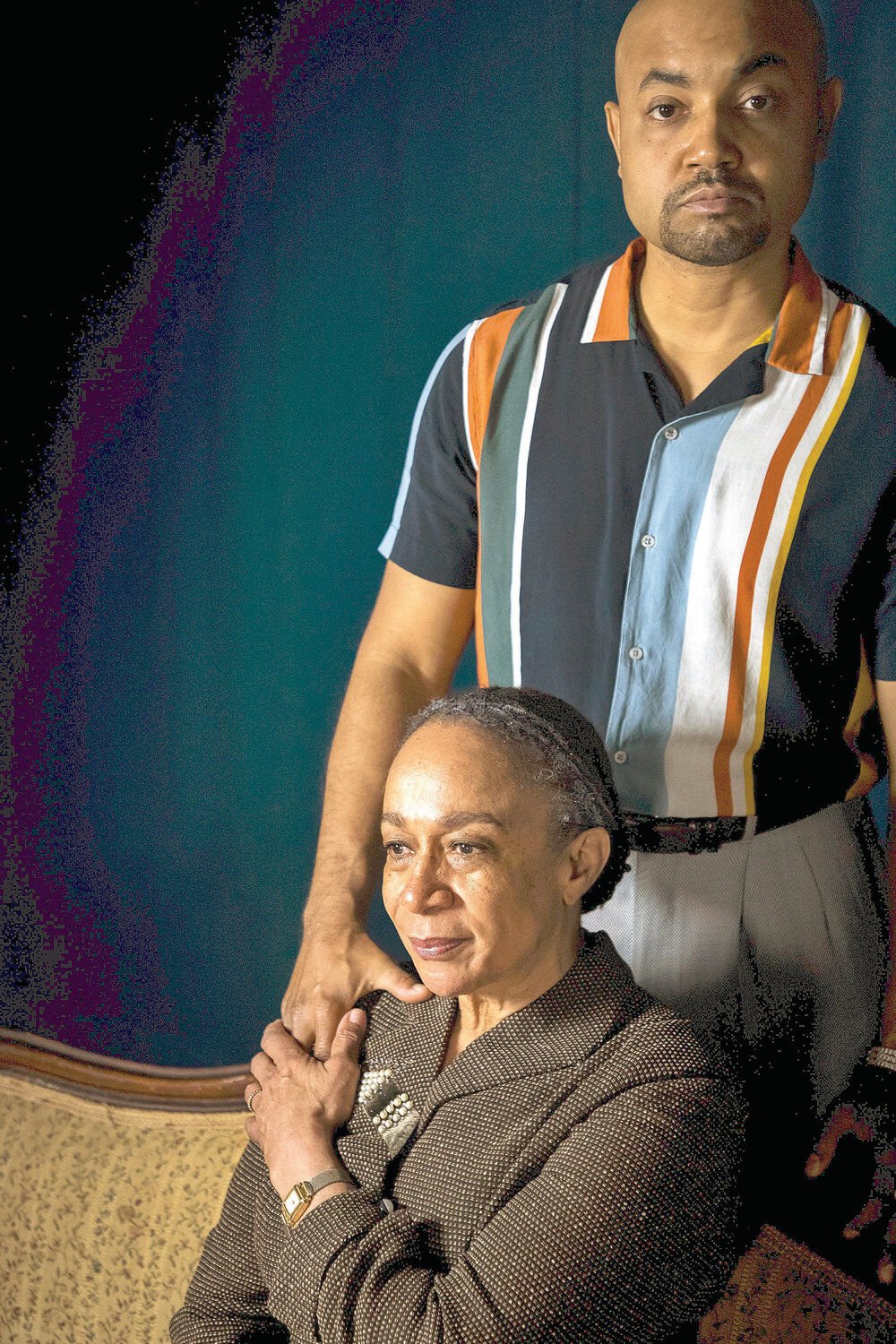 S. Epatha Merkerson is Lena Younger and Francois Battiste is her son, Walter Lee, in Williamstown Theatre Festival's production of Lorraine Hansberry's "A Raisin in the Sun." Robert O'Hara is directing this 60th anniversary revival which is running on the festival's Main Stage through July 13, Press opening is Saturday

From left, Mandi Masdon as Ruth Younger, S. Epatha Merkerson as her mother-in-law, Lena, and Nikiya Mathis as Lena's daughter, Beneatha, during a rehearsal of Williamstown Theatre Festival's production of Lorraine Hansberry's "A Raisin in the Sun."

S. Epatha Merkerson is Lena Younger and Francois Battiste is her son, Walter Lee, in Williamstown Theatre Festival's production of Lorraine Hansberry's "A Raisin in the Sun." Robert O'Hara is directing this 60th anniversary revival which is running on the festival's Main Stage through July 13, Press opening is Saturday

WILLIAMSTOWN — How does one approach mounting a production of a much beloved and celebrated work that has become an enduring American classic?

In the case of Lorraine Hansberry's iconic play, "A Raisin in the Sun," which comes with the legacy of being the first play by an African American woman to be produced on Broadway, as well as a lengthy list of critically-acclaimed productions and award-winning actors attached to it, producing the play in the year of the 60th anniversary of its Broadway debut could be a formidable task.

"I'm not looking at it as a classic play, I'm looking at it as a new play. I'm challenging the notions of how it should be done and how it deserves to be done," O'Hara said during a phone interview with The Eagle. "And so, I'm approaching it from a very theatrical point of view and trying to make everything as fresh as possible I'm looking at how we see this family in 2019; how this family looks from our scope of what has changed and what has not changed."

Set in 1959, in a cramped apartment on Chicago's South Side, "A Raisin in the Sun" opens just after the death of the Younger family's patriarch. His widow, Lena (Mama), is at odds with her son, Walter Lee, over how to spend a soon-to-arrive life insurance check of $10,000. Lena wants to buy a house, as she and her late husband once dreamed of doing, while her son thinks it would be better to invest the money in a business venture, freeing him from his life as a chauffeur.

Lena compromises, putting a down payment on a house in a still segregated suburban neighborhood of Chicago and entrusts Walter Lee with the rest of the money, half of which he is instructed to put aside for his sister Beneatha, who is studying to become a doctor. As moving day approaches, the family grapples with challenges both internal and external, and decisions that will impact the future of all those involved.

"I think what makes `A Raisin in the Sun' great is that it has elasticity. You can pull it and stretch it, just like you can with other classics, and it bounces right back," O'Hara said. "It's been a lot of fun investigating that with this cast and allow them to go into different places that are uncommon for these iconic characters."

He said audiences should not expect to see a play that is a carbon copy of the original version that premiered on Broadway at the Ethel Barrymore Theatre on March 11, 1959.

"There's nothing I could do to `A Raisin in the Sun' that would diminish its importance or its legacy. So, why would I want to try and emulate [other productions]? Why do I need to come up here and do what everyone else has done? How is that benefiting anyone? You can find anyone to go and do what is supposed to be. That doesn't interest me as a director or an artist at all.

"What I think is happening here, which is really quite lovely, is that Robert is looking at this play with 2019, very fresh eyes," said Merkerson, who plays Lena Younger (Mama), during a recent phone interview. "... That allows us to look at the characters' actual words. What are they saying, that perhaps could not be said, the same way, in 1959? How can we make these characters the individuals that they are; the way they were written, but with a heightened sense of what has happened in these 60 years and present that in the person?"

Merkerson, who played Walter Lee's wife Ruth in a production some 30 years ago, said that letting go of all the trappings that come with the iconic script has been a freeing experience and has allowed her to shape Lena's character from a perspective that is different than that of many of the women who have taken on the role before her.

"I know the things that happened after [the Younger family] moved because I lived them. I can see it from when I was young, my parents having come up through the Great Migration from south to north," she said. "It's being able to see this character, from the eyes of a woman who is her age — I might even be older than she was written; I'll be 67 this year She's always been played as this very old woman.

"At 66, I don't feel like an old woman. That doesn't mean I'm going to be jumping around stage, it just means my perspective is slightly different because I am the woman's age. I don't have a whole lot of gray hair. I don't have the girth that some of the women who have played this part have, but I don't think that makes a difference in explaining who this woman is, what her dreams were for her children, and as Langston Hughes said so beautifully, how their dreams were deferred."

O'Hara's deep dive into the text, his examination of what is being said and how that applies in the here and now, Merkerson said, will challenge audience members to think about the play in a different way.

"He's extraordinarily innovative and he has a vision for this play that is going to turn peoples' thoughts about it upside down without leaving the footprint," she said. "We have, by no means, walked away from the footprint of this play, but he has discovered within this script, I think, a different more realized play.

"It's exciting to do it. I'm really from that old school. I've seen this play. I've done the play. I've watched the movie. There are times when we're in rehearsal and he'll tell us what he wants from this particular moment, and I'm like, `I doubt they ever thought of that.' Or, `They couldn't do that because of the time,' and I'm speaking only of 1959, but most productions you see of this are blueprints, cookie-cutter, of the way it was originally done. Robert, in his way, has really delved into the text and he is reading what is in the text and its from a 2019 perspective and I'm fascinated by what we're doing as well."

But, she said, regardless of the casting off of iconic stage directions or new interpretations of the text, that Hansberry's words, her play and her characters are still in tact. And it is Hansberry's original work, no matter how it is directed or acted, that still resonates with audiences today.

"The theme is so universal. No matter who you are, you dream of a better life I believe that universal theme is what really carries the play and has carried it all these years: that angst of Walter Lee; that desire for Mama and Big Walter to have and present a life so their children's lives can be better; the wife who wants her son and her husband to succeed; the sister that dreams of being something other than their family has been ... ," Merkerson said.

"It is not unlike any other immigrant family that comes to this country today. They still have dreams. That's why I think the play still resonates and the truth is, in some ways, things have not changed. There are still these issues of racism, specifically now, that we are still dealing with. So it certainly resonates in the African American community, but I think the community at large can understand the very basic theme is dreams and fulfilling dreams."