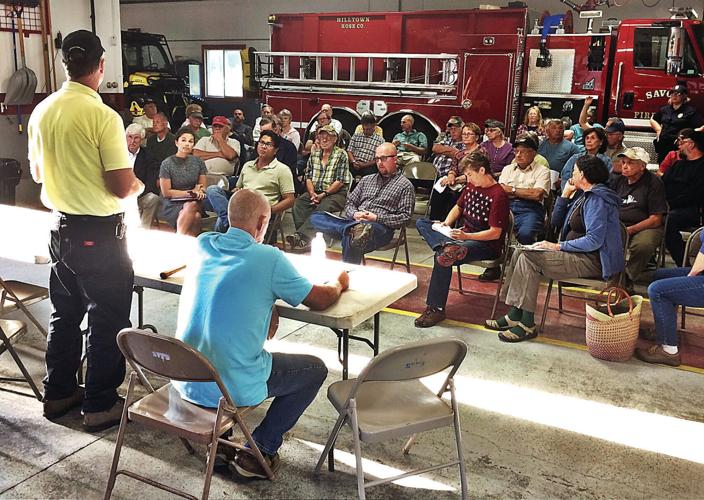 Savoy Select Board Chair John Tynan runs a public hearing Thursday at the town firehouse on a request to alter the town's wind-power bylaw to allow the Minuteman Wind LLC project height to increase by 30 feet. 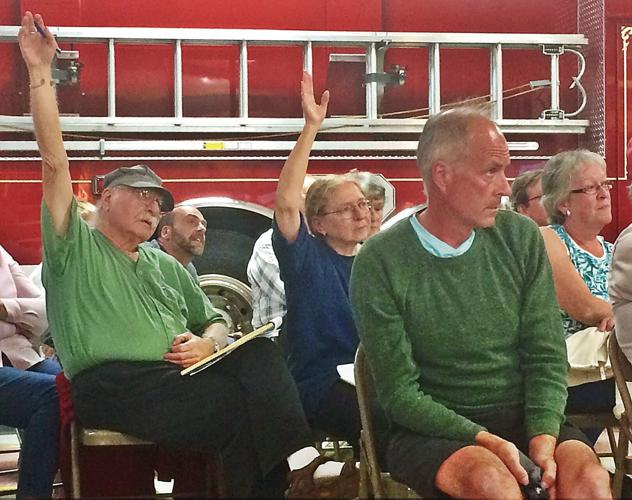 Marshall and Susan Rosenthal, left, wait to ask questions at Thursday's public hearing in Savoy on changes to the town's wind-power bylaw.

Savoy Select Board Chair John Tynan runs a public hearing Thursday at the town firehouse on a request to alter the town's wind-power bylaw to allow the Minuteman Wind LLC project height to increase by 30 feet.

Marshall and Susan Rosenthal, left, wait to ask questions at Thursday's public hearing in Savoy on changes to the town's wind-power bylaw.

SAVOY — A half hour into a public hearing Thursday night at the Savoy firehouse, Bobby LaBonte and more than half a dozen others walked out.

He paused in the parking lot to explain why.

"This meeting just got carried away, because of too many people from out of town," he said. "We just got sick of hearing it."

While the official business was a proposal to increase the maximum height of already approved wind-power turbines, the hearing turned into a wider and contentious critique of wind power's safety in rural communities.

No votes were taken. The question of whether a project in the making since 2004 can increase its height by 30 feet will be decided at a future special Town Meeting.

John Tynan, Savoy's Select Board chairman, said after the hour-long hearing he warned representatives of Minuteman Wind LLC and their partner, Palmer Capital Corp., that an attempt to adjust a bylaw passed in 2008 could be controversial.

"It's going to open up the whole discussion again," he said.

People in a crowd of about 70 used the occasion to challenge the project for which Minuteman Wind holds a permit.

Tynan and Lindsay Deane-Mayer, a representative of Palmer Capital of Cohasset, fielded questions and comments about Minuteman's project, as members of the audience raised concerns about the health effects of low-frequency "infrasound."

Nancy Shea rose to say she moved from Tilda Hill in Florida after the Hoosac Wind Power Project turbines were erected in Florida and Monroe.

"Infrasound will make you sick, if you can't afford to move," she said.

Shea asked how a proposal to increase the maximum turbine height from 425 to 455 feet in Savoy would affect low-frequency noise.

Deane-Mayer countered that a noise study had been submitted earlier when Minuteman Wind secured its permit for the five-turbine project on West Hill, on the town's eastern border with Hawley.

And she said "there is not scientific consensus" about such sound, drawing murmurs from the audience.

Shea was just one of several people from outside Savoy to speak.

"Please think about who's living nearby," she said.

Lloyd Crawford of Hawley, who owns the Stump Sprouts cross-country ski area in that town, also appealed to a sense of community.

"Think about your neighbors. This neighbor says, 'Why don't you put solar up there?'" he said.

Crawford's tract of several hundred acres sits on the east side of the Savoy land, owned by Harold "Butch" Malloy, that would house the turbines.

In an interview outside the hearing, Crawford said he questions noise studies conducted for the Minuteman project, claiming that tests of "ambient" sound, which are used to set turbine noise limits, were conducted during spring melt when streams were running noisily.

"If they care about this, they should not consider it a done deal," Crawford said outside the hearing. "I've been ignored for 10 years because I don't live in town and they can afford to ignore me."

But some Savoy residents, like Edwin R. Wilk, urged the hearing to stick to the issue of turbine height.

"All I hear tonight is everything but," he said.

Malloy, who would be compensated for use of his land if the project advances, sat listening to challenges.

After the hearing, he expressed confidence the turbines will go up. People who walked out in frustration over raised voices during the hearing, he said, will be back at special Town Meeting to approve the height increase.

"It will be a completely different thing," Malloy said of that future vote. "It's 'call me when it's time to vote,'" he said of his allies in town. "Our supporters walked out the door early on."

The company can be contacted through the Minuteman Wind website, minutemanwind.com.

Among those listening was Stephen Barrett of Concord, an environmental consultant who has been a Minuteman Wind LLC principal since 2004.

He said he continues to believe the project is well-suited to Savoy.

"It's a small wind farm that fit the landscape of the surrounding area," Barrett said.

Deane-Mayer has said the project could advance even if it isn't able to increase turbine height, a request prompted by changes in available turbine equipment.

"There's no reason why this project could not move forward," he said.

If the height maximum isn't increased, though, the town will not be able to draw as much tax revenue from Minuteman Wind. By increasing the height 30 feet, the turbines, with longer blades, could produce up to 15 percent more electricity, Deane-Mayer has said.

The town and Minuteman Wind have just begun negotiations on the what tax revenues will become available to Savoy, through a payment in lieu of taxes program, or PILOT.

Nonetheless, Tynan said that if the height is increased to 455 feet, the town could receive another $40,000 a year in tax revenues, on top of whatever agreement is reached on a PILOT for the 425-foot limit.

Tynan declined a request from one questioner to provide an estimate of the total PILOT value.

"If I give you a number, it's going to stick in your head," he said. A decade ago, the estimated tax benefit to the town was $220,000 a year — a figure both Tynan and Minuteman Wind say is no longer possible, given changes in energy markets.

The PILOT terms won't be known until Minuteman Wind finds out whether it can increase the farm's output.

"They'd have to compare the financial benefit with how they'd be affected," Barrett said of Savoy residents.

Marshall and Susan Rosenthal were making just that sort of calculation, as they waited to ask their questions.

"The taller these turbines are, the more people are going to be impacted," Susan Rosenthal said.