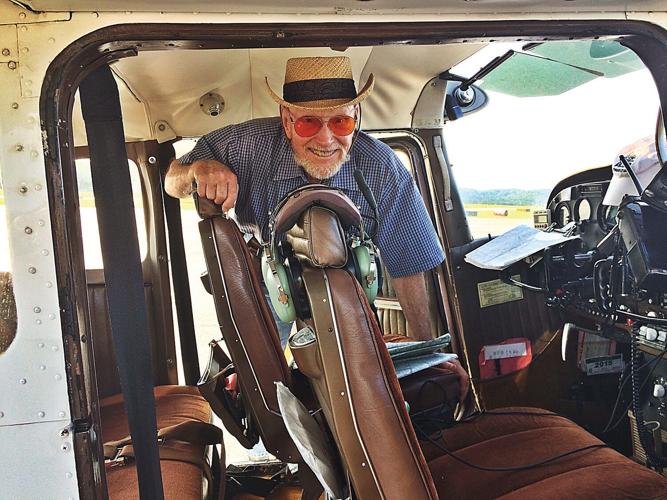 Norman Baker, shown in August 2015, had flown his 1966 Cessna across the country and to Canada several times, and regularly to visit his sons in Vermont and Provincetown and his daughter in Milton, according to his family. 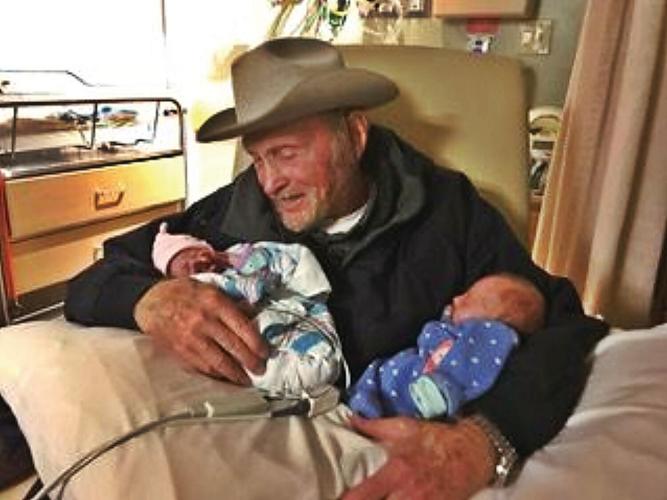 Two weeks ago, Baker celebrated the birth of his son Daniel's twin daughters, Hattie and Phoebe, in Vermont. 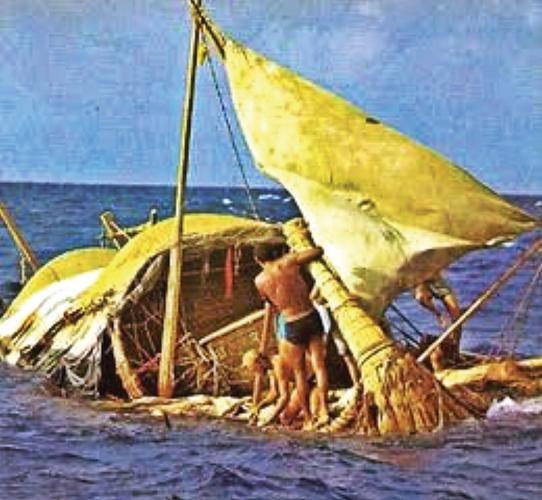 Baker, left, kneeling, tried to sail across the ocean on a reed boat in 1969 with Thor Heyerdahl, but the mission ended in failure.The next year, the team tried again and succeeded. 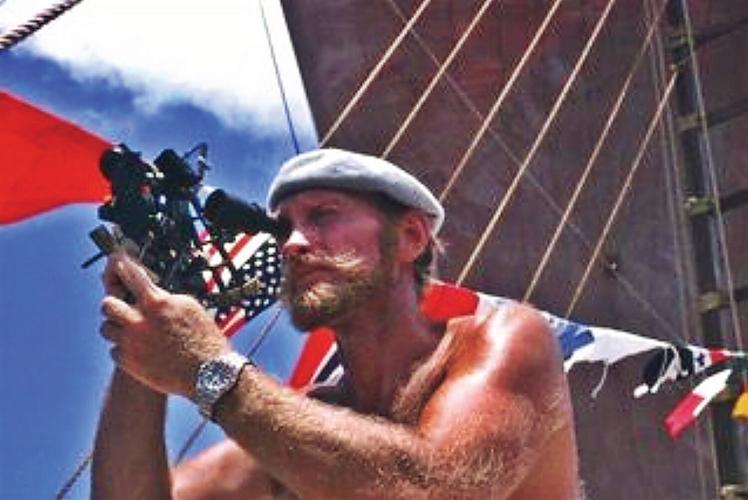 Baker uses a sextant while navigating on the Ra II voyage, his second expedition on a reed boat with Thor Heyerdahl in 1970.

Norman Baker, shown in August 2015, had flown his 1966 Cessna across the country and to Canada several times, and regularly to visit his sons in Vermont and Provincetown and his daughter in Milton, according to his family.

Two weeks ago, Baker celebrated the birth of his son Daniel's twin daughters, Hattie and Phoebe, in Vermont.

Baker, left, kneeling, tried to sail across the ocean on a reed boat in 1969 with Thor Heyerdahl, but the mission ended in failure.The next year, the team tried again and succeeded.

Baker uses a sextant while navigating on the Ra II voyage, his second expedition on a reed boat with Thor Heyerdahl in 1970.

WINDSOR — Norman Baker lived a full life of adventure: on land, water and in the sky.

The 89-year-old pilot, skier, sailor, equestrian and arctic explorer died Wednesday when his plane crashed in Pittsford, Vt., while he was en route to celebrate Thanksgiving with his family, his eldest son, Daniel, said Friday.

The cause of the crash remains under investigation.

"My dad didn't drive," Daniel Baker, of Starksboro, Vt., said with a small chuckle. "My dad would rather fly than drive."

Baker had flown his 1966 Cessna across the country and to Canada several times, and regularly to visit his sons in Vermont and Provincetown and his daughter in Milton, according to his family.

The Windsor man was an engineer by trade but an explorer at heart, having been the navigator in three of the famed Thor Heyerdahl reed boat expeditions, according to friends and family, and a longtime fellow and former director of the Explorers Club in New York City, which brought him on yearly travels and lectures around the world.

"He was just an amazing, unstoppable man and with just a huge sense of adventure," said his youngest son, Mitchell Baker, 53, of Provincetown.

At age 13, Baker was awarded flying lessons after winning a model airplane-building contest, and by 17, he was flying solo.

It was at Cornell University where Baker, captain of the Pilots Club, learned to ski, a passion he brought with him through the rest of his life.

After college, he took a job as a laborer and later as an engineer in the gold mines of Alaska before moving out West as a surveyor, where he staked out the last state boundary lines, but soon ended up enlisting in the Navy, where he was a commander during the Korean War, Daniel Baker said.

Baker met Heyerdahl by chance after the war, while in Tahiti, and he became his lifelong mentor and friend. Photos of Baker on the reed boats Ra, Ra II and Tigris, are displayed in Heyerdahl's Kon-Tiki Museum in Norway.

Mitchell Baker and his sister, Elizabeth Atwood, said they knew from an early age that their father was unique from those in other families they knew.

Mitchell, Daniel and Elizabeth were on skis by the time they were walking and were acquainted with people from every continent before they were teenagers.

As children, their family traveled around the country as Baker held lectures about his expeditions, and in the 1980s, the entire family moved to the British Virgin Islands, where they rebuilt the Norwegian schooner Anne Kristine.

They lived on the tall ship, which was built in 1868, for several years and sailed it to Manhattan, N.Y., before it was destroyed in the "Perfect Storm" in 1991, Daniel Baker said.

But of all their father's adventures, the most special to Baker was his 43-year marriage, his children said. In 2003, Mary Ann Baker died of lung cancer at 66.

"She was the most important part of his life and really completed him," Mitchell Baker said. "And they had a really beautiful marriage."

The death of Mary Ann devastated the family. The Windsor community, where the Bakers had lived full time since the 1990s, came together to grieve with Baker.

"He and my mom were so grateful to move to Windsor," Atwood said. "The community is the warmest, healthiest place. I can't even tell you how, over the years, how they have cared for my dad."

Each year, to honor his wife, Baker and his friends would get together for a memorial paddle on Plainfield Pond, according to Sue Flores of Cummington, who was friends with the Bakers for over 20 years.

When the couple moved from New York City, where Baker ran a concrete construction company, to Windsor, they became actively involved in the small community.

The Bakers are Jewish, but Norman and Mary Ann were members of the West Cummington Congregational Church, where they made many friends over the past few decades.

He would regularly pop in at the Sangar General Store, pick up skim milk and noodles, and chat with the store's owner, Prem Sangar.

"He was here this week, on Monday," Sangar said. "He was talking about how he was excited about going to see his family."

"He only had one personality, and that was optimistic and sure of himself," Flores said Friday night.

Baker loved to tell stories about his travels, many of which Flores recounted Friday evening.

At nearly 90 years old, he didn't slow down and was looking forward to a season of skiing in the Berkshires, Flores said.

"Norman had a lot of friends, and he was this extremely accomplished person who lived in our midst very humbly and enthusiastically," said Kristi Nelson of Hadley, who was a good friend of both Bakers. "He had this love for life and this adventurous spirit that was absolutely unstoppable. He was this incredible storyteller, and all his stories were based in reality."

Before his death, Baker was splitting his time between his home in Windsor and Atwood's home in Milton.

Each morning, Baker would make himself a bowl of granola and fruit before beginning his exercise routine, which included pull-ups on a bar he installed in Atwood's house.

Baker could do more pull-ups than his 19-year-old grandson and Atwood's husband, William, his daughter said.

"It wasn't a narcissistic thing," Atwood said. "He was very committed to living his life in the fullest way possible."

Atwood recalled a trip the family took to Rwanda about five years ago to visit her daughter. During the trip, the family took a strenuous hike into the mountains to find gorilla families.

One silverback gorilla walked over to Baker and pushed him over, which immediately concerned the rest of the family.

"But he just started laughing," Atwood said. "He was just thrilled to be pushed over by a silverback in the jungles of Rwanda."

When Baker wasn't sharing stories about his own adventures, he was intently and curiously listening to the stories of Atwood's three children, whom he adored, she said.

"He would listen to my children's lives, about high school life, and appreciate it just as if he was listening to Thor Heyerdahl's stories," Atwood said, choking up. "He was a great father to my brothers and I, but he was an even better grandfather."

Two weeks before his death, Daniel Baker's partner gave birth to twin girls, and Baker took the trip to Vermont to meet his youngest grandchildren.

While devastated by her father's loss, especially so close to Thanksgiving, Atwood feels grateful that Baker died, without suffering, while doing what he loved. Atwood said that she is sure that, during his last breaths, her father was thinking of his wife.

About two years ago, Baker broke his neck when he fell off a horse. More recently, he had hip surgery. Neither incident stopped him from exploring, but occasionally made walking more difficult, Mitchell Baker said.

"His airplane was the one place he felt young and not impaired at all," Mitchell Baker said. "Especially after losing my mother, flying was his great passion."