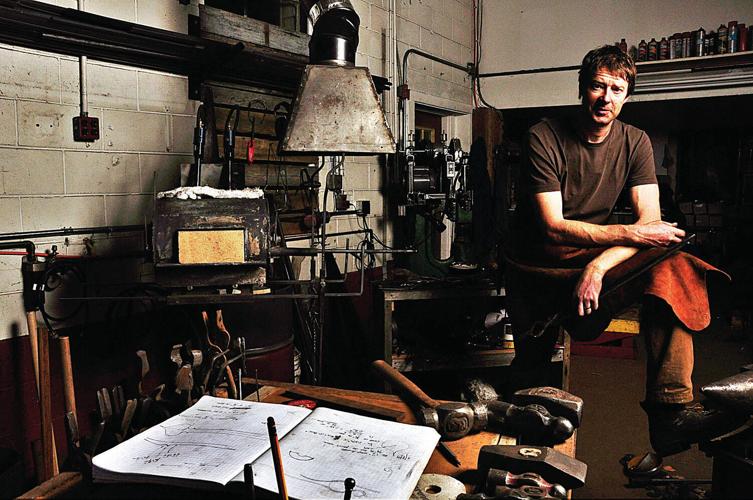 Del Martin of Knox Trail Forge in Monterey is on a mission to bring back the old ways - in the form of practical, handmade steel items. 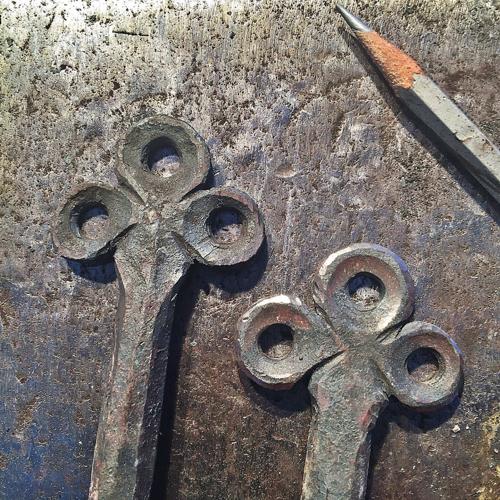 Detail of a hearth tool made by Del Martin, who began forging metal nine years ago. 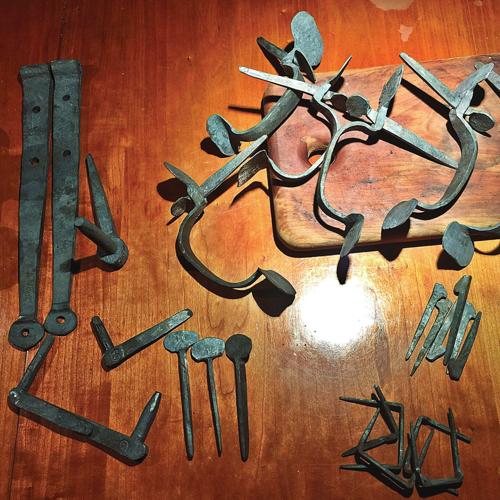 A collection of handles, hinges and thumb latches made by Del Martin of Knox Trail Forge.

Del Martin of Knox Trail Forge in Monterey is on a mission to bring back the old ways - in the form of practical, handmade steel items.

Detail of a hearth tool made by Del Martin, who began forging metal nine years ago.

A collection of handles, hinges and thumb latches made by Del Martin of Knox Trail Forge.

MONTEREY — The metallic ping-ping-ping echoing these days across this village is the sound of rebellion. Follow the sound and you'll come upon a tall, lean, soot-smeared man set against a backdrop of a flaming forge, a whiff of sulfur in the air.

The man, Del Martin, hammering a red-hot clump of steel on an ancient anvil, is finally intent on shaping the world the way he sees fit.

In practical terms, he's a blacksmith, a maker of candle stands, knives, hinges, thumb latches, bottle openers, hearth tools, corkscrews, garden gates — rustic, functional, instant antiques, things that'll be dug out of the earth, intact, 500 years from now, if there's anyone left to do the digging. They'll brush them off, hold them up to the sunlight and declare, "Now, that is what you call a hinge."

In more philosophical terms, in the hinge of history, per se, the man has been inside the belly of the beast, the evil, evil beast, and he's in the process of inducing his own regurgitation.

To his mind, the beast comes in many forms. The usual suspects include the banking industry, the energy industry, the weapons industry and politics, to name a few. The clear commonality being that some people are making an obscene amount of money at the expense of many other people. Martin, 52, an auto mechanic, is most acquainted with the car industry beast. On most days, most of the time, most of his body could be found under the hood of a busted-up machine swallowing him whole.

"I've developed a keen dislike for cars," says Martin, who holds a master's degree in structural geology. "They are poorly built from an engineering and design standpoint. They're not built to last. They're built to make it through warranty, and it's all driven by corporate profits, and I don't want to be part of the industry anymore."

Until a year ago, the sign outside his shop said "Del Martin Automotive." That sign is gone now, and, to a certain degree, so is the man who first hung it nearly 19 years ago. Martin, a homesteader, a husband to a schoolteacher and a father of two, hung a new sign that now identifies his shop at 406 Main Road as "Knox Trail Forge," a nod to the history and rebellion that trundled past this spot one day a couple of centuries ago.

Main Road in Monterey represents a segment of the historic trail improbably traced by Colonel Henry Knox and his men, who were commissioned by Continental Army Commander George Washington in the winter of 1775-76 to transport cannons, mortars and howitzers from Lake Champlain in New York to the colonial army camped outside Boston.

Imagine that: A bunch of farmers, farriers and woodsmen — no doubt a tough bunch of exceptional troubleshooters — conscripted to haul artillery by the tonnage some 300 miles, including across the snowy Berkshire Hills, all in the successful effort to found a new nation.

The metallic ping-ping-ping echoing these days across this village summons the old spirits, the old ways, the better ways, pressed into service like a team of heavy-lidded, imperturbable oxen.

The haul now, like the haul then, happens to be forged iron or its equivalent. Heating it over a bed of coal until it's red hot and malleable and then pounding it and twisting it into useful objects is an endeavor that developed naturally from Martin's blessed "gadget habit — the disease to do everything myself." The symptoms are these: Instead of paying money to have something fixed or manufactured, he educates himself, buys the proper tools, does the deed and has the tools at the end of the project.

"I imagine most blacksmiths have that disease," says Martin, a captain on the Monterey Fire Company, an accomplished caver, Eagle Scout, farmer and woodsman who, over the span of the past nine years, has become an accomplished blacksmith as well. He's mostly self-taught. He's grateful for the generous advice given by fellow blacksmiths he has met through Instagram, a kindly subculture quick to take care of its own.

How did he get to become a man with so many irons in the stove? Martin's chopping-down-the-cherry tree moment came at age 6 or 7, when he took apart the family telephone. He wasn't able to put it back together again. His mom was angry. He has long since atoned for it. He has built computers, engines, barns, houses, tractor implements, even a meat smoker made from a steel file cabinet.

An off-the-gridder, having blinged his house out in the monochromatic plumage of photovoltaics, Martin raises his own hogs and chickens. He's the go-to guy in town when something — anything — is busted. And that's all fine with him. But these cursed automobiles — damn these automobiles.

He puts it this way: "You have someone who works hard and has a car and it's less than 10 years old. Outwardly, it's not a piece of crap, but then you put it on the lift and you see the rust and it's falling apart, and then you have to break the news to them. I was having no creativity — doing a good job, but people don't walk out of here saying how psyched they are to pay me $1,000. No one was leaving here psyched. And I'm not psyched. No one feels good about it. That's the nature of auto repair."

But you know what makes people happy? Hand-forged metal.

"Look at that," says Martin, holding out the base for a set of candle stands that have been sitting overnight in a basin of vinegar.

What he's saying is: "Way cooler than a brake job on a Subaru, right?"

In a logical world — one perhaps not controlled by bankers, big businesses and politicians — instead of fixing things that are shoddily made, Martin would be the maker of things that won't break to begin with. But it's not entirely a logical world. It's a broken world, and so Martin still repairs cars — just fewer of them.

You don't need to guess at his aspirations. A mini-revolution has been playing itself out on the floor of his shop these past couple of years. A full half of his two-bay garage has been annexed by the rebellion — the forge and all its ancillary accouterments, the anvils, hammers, tongs, vises, fly press and a small showroom that includes knives that will cut a tomato and knives that will disembowel a werewolf.

He has just fired up the forge to make bottle openers — stylish, tapered, little 7-inch steel twigs, with a whimsical curlicue on one end and an authoritative burr on the other. He's preparing for a series of craft shows, including the Made in Monterey Holiday Sale on Dec. 2, and the Shire City Sanctuary's annual Holiday Shindy on Dec. 9-10 in Pittsfield.

Can a fella make it as a blacksmith in age of cheaply priced, mass-produced crap, boxed and shipped from the belly of the beast?

"Well, I don't know yet," says Martin, who pins a red-hot piece of steel against the face of his anvil and prepares to pound it with a beat fit for a battle march.

Felix Carroll is The Eagle's community columnist. He can be reached at fcarroll@berkshireeagle.com.