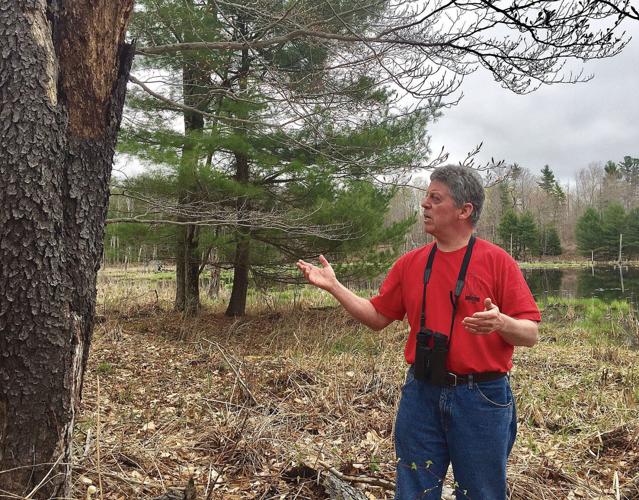 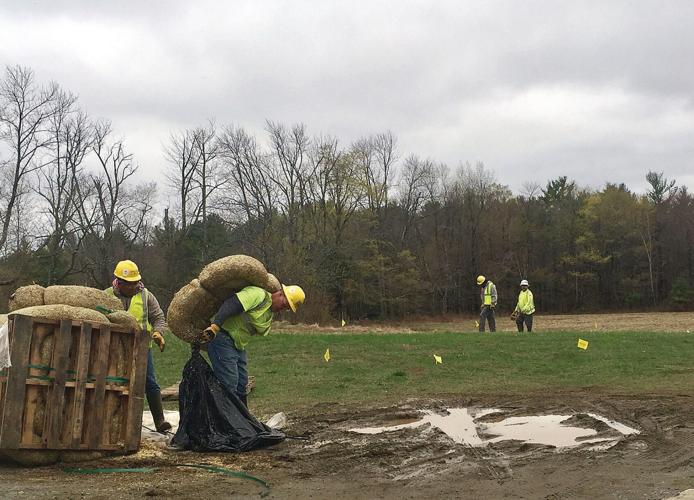 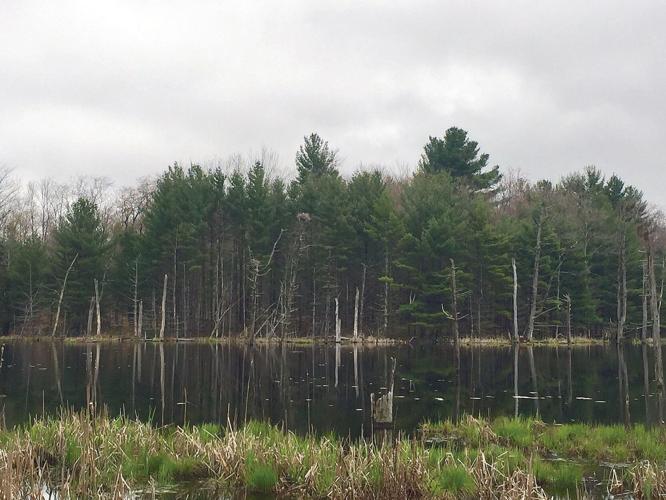 This beaver pond adjacent to the pipeline corridor is home right now to at least five Great Blue Heron rookeries. Two can be seen at center.

This beaver pond adjacent to the pipeline corridor is home right now to at least five Great Blue Heron rookeries. Two can be seen at center.

SANDISFIELD — The bugs are back in this low-lying part of town. It's humid and the ground is still wet from recent rains. Daffodils are popping up everywhere next to old stone walls and forests.

After bushwhacking through brambles to get to the edge of a beaver pond, Bill Kitchen points up to a series of large nests. Binoculars reveal a head in several — and when one adult steps out to perch, Kitchen confirms these are great blue herons, five rookeries total.

This beaver pond is adjacent to the pipeline corridor where Tennessee Gas Pipeline Co. is about to begin cutting trees on about 29 acres across 4 miles of Otis State Forest and private land.

The company's Connecticut Expansion Project is why Kitchen has come here from his home in Johnstown, N.Y.

"I was hoping to find an eagle's nest to throw a monkey wrench into the pipeline plans," he said.

No such luck. Instead, this longtime environmental activist found the herons, which are protected by the Federal Migratory Bird Treaty Act of 1918 but are not an endangered species.

Kitchen said this shouldn't matter one bit. He also worries about nesting bats, populations of which have been "decimated" by disease, and which generally have only one pup a year, he said.

He said what's about to happen here is terrible.

"None of the birds know what's going on," Kitchen said. "They're just sitting in nests laying eggs right now."

The birds aren't alone. No one but officials from the Kinder Morgan subsidiary knows when the cutting will begin since the company will not release schedules.

And the atmosphere here is pregnant with anxiety over it, particularly given the company's heavy security presence along these rough rural roads. The work is set to begin after several years of escalating tension over the pipeline path, environmental and safety concerns and questions about the company's natural gas demand projections in Connecticut, where most of the gas will go.

Despite efforts by residents and environmental groups to delay the project, Tennessee Gas has obtained all its permits and even an easement on about 2 miles of state land that is protected under Article 97 of the state Constitution.

Kitchen said he can't stand that nests might be harmed. He said these herons might vacate the rookeries the minute heavy equipment starts felling trees next door.

The U.S. Fish and Wildlife Service said in a letter to Tennessee Gas that it "recommends" clearing and cutting "outside the breeding seasons." Under the Migratory Bird Treaty, however, there is no "time-of-year restriction" for cutting.

David Simmons, the endangered species supervisor for U.S. Fish and Wildlife in New England, told The Eagle it's up to the company whether or not it takes the agency's advice to cut outside of breeding season, and that his agency deals directly with Federal Energy Regulatory Commission, which approved the project. He said it is possible, as well, that there might not be an impact on nesting birds.

Walking a dirt road here, Kitchen said he has devoted his life to climate change issues and monitoring wildlife in the Adirondacks.

"I'm a single guy with no kids or that kind of responsibility, so I have the freedom for these sorts of things," he said, adding that he spent three days in jail with author and environmentalist Bill McKibben in 2011 for protesting the Keystone XL Pipeline outside the White House.

Back at the pond, two women appear. The grapevine here is quick, and they said they had heard about Kitchen and the herons, which he had reported the day before.

Cathy Kristofferson, of Massachusetts PipeLine Awareness Network, and Irvine Sobelman, a Sugar Shack Alliance activist from Northampton, said they had come to do research. Kristofferson said she's been documenting the vernal pools, as well.

"They're full of eggs," she said, adding that she's worried vibrations and noise from chainsaws and feller-bunchers will scare the herons from their nests.

On the other side of Cold Spring Road, Ron Bernard said it is the wildness and abundance of nature here that's helped various parties delay the construction.

"I've got turtles, dragonflies, great blue herons," he said. "I'm representing a beaver down the road. It's a moral victory."

But that's the only kind of win here, Bernard adds dryly. He and Jean Atwater-Williams live in a 1785-built home, 270 feet from the pipeline, which runs through their property. Bernard said it was four years ago that a Tennessee Gas official asked him to sign over the easement.

The two have been involved in this fight from the beginning, and both say the beauty of this homestead and this area fueled them to fight against a very powerful company from their little corner, where moose come to eat water lilies in their pond.

"There's nobody to represent the human beings that are here," Bernard said, noting he worries about the safety of the pipeline, and keeping the high-pressure lines secure.

"We made every case we could," Atwater-Williams said. And the company jumped through every hoop set before them, she added. "It was worth it to them."

Bernard, a retired pharmaceutical industry executive, and Atwater-Williams, a computer consultant, speak of what they say is the pipeline company's land-taking for private profit and backed by federal interstate commerce law. They talk about it with the same frustration Kitchen talks about the travesty of nest disturbances.

"They don't have to buy the land or pay taxes on it," Atwater-Williams said of the easements. "There are [thousands] of miles of Kinder Morgan pipeline and most of that land "has been seized," she adds. "And they've got it forever."

The couple looks out over their pond, and a tractor-trailer loaded with pipeline equipment makes the sharp bend next to their house.

It's still home, though.

"It's beautiful here," Atwater-Williams said. "That's why we live 17 miles from the nearest grocery store."