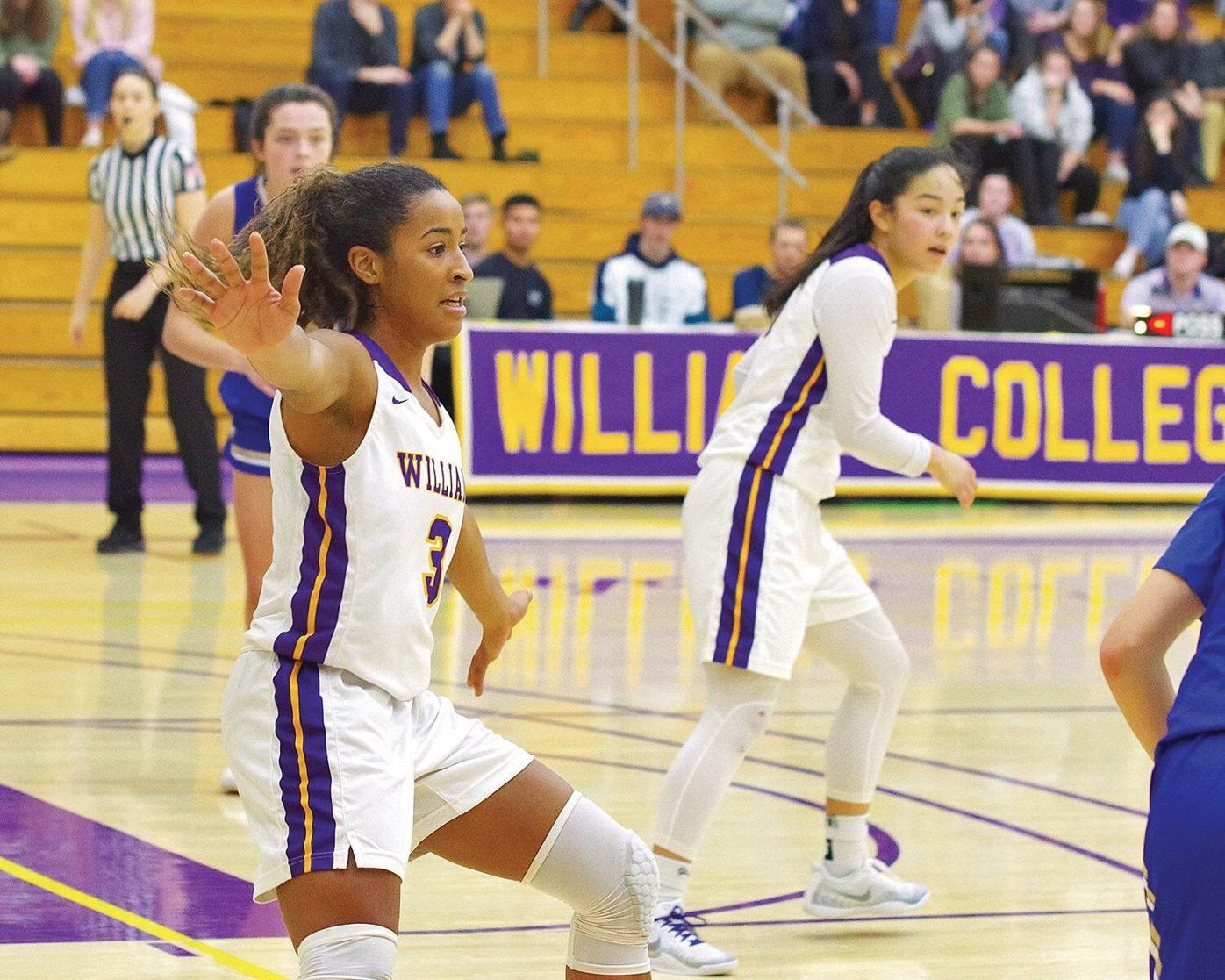 Williams' Gabby Martin defender during a basketball game last season. Martin already lost her fall sports season this year after golf was canceled. Now, she is weighing up her options as the fate of winter sports is still debated. 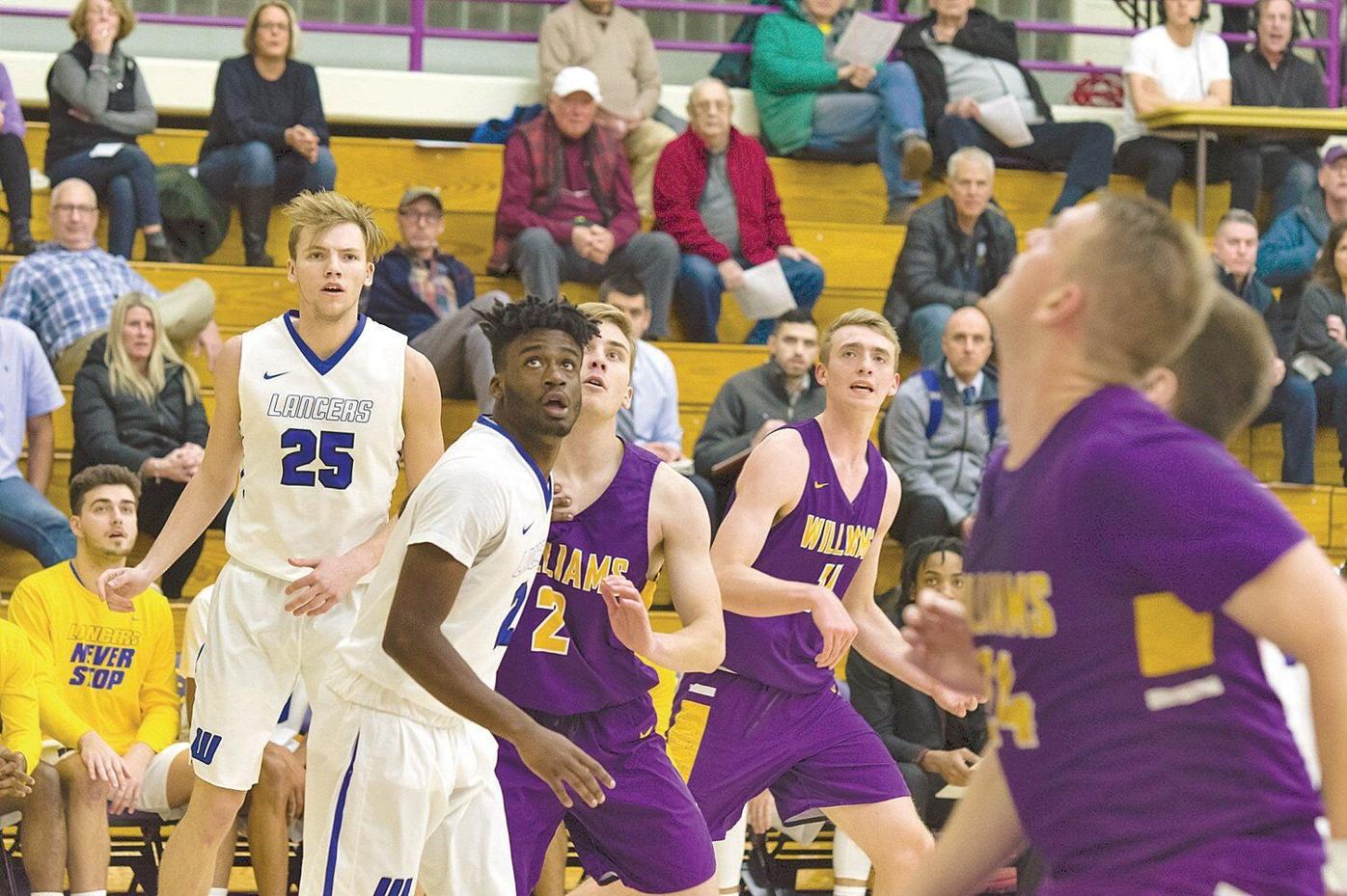 Williams' Ryan Moore (2) and Spencer Spivy (11) watch an early shot miss the mark in a game last season. Spivy knows that there is no guarantee that basketball is played this winter, but he still plans on returning to Williams College in hopes of being able to play.

Williams' Gabby Martin defender during a basketball game last season. Martin already lost her fall sports season this year after golf was canceled. Now, she is weighing up her options as the fate of winter sports is still debated.

Williams' Ryan Moore (2) and Spencer Spivy (11) watch an early shot miss the mark in a game last season. Spivy knows that there is no guarantee that basketball is played this winter, but he still plans on returning to Williams College in hopes of being able to play.

Fall sport college athletes across the country have had their seasons eliminated because of the novel coronavirus pandemic. It started with conferences like Division III NESCAC and the Division I Ivy League canceling their seasons, and has led to some so-called Power-5 Conferences doing the same.

But what of their winter sport brothers and sisters?

Williams College had given its students, including student-athletes, the option of taking the fall semester off and incoming first-years could take a gap year. Winter sports athletes won't have their first contests until mid-November, and much about the pandemic could change between now and then.

"I personally am coming back in person on the usual schedule. Almost everybody on the team is doing that," Williams men's basketball player Spencer Spivy said. Spivy is a rising junior from San Francisco, but a junior who has family members in Berkshire County.

As of today, Williams has not determined whether or not winter sports will be contested and when those seasons could start. The school had posted Oct. 15 as the first day of practice for winter sports teams. That's a change from the traditional Nov. 1 start date.

Last year, the first winter sports contests were played the weekend of Nov. 15-16. Assuming that winter sports are being played, it is not known if those games would start at a similar time, wait until after Thanksgiving or wait until January 2021.

"It was" a difficult decision at first, Spivy said. "Early on, when we received the news about [college president Maud Mandel's] email, and that the fall was going to be a hybrid online and in person format, we texted in a basketball group chat the day of. We all sort agreed we'd be there in person together, in whatever capacity that is instead of going our separate ways in the fall. "After the team collectively agreed on that, it became a pretty easy decision for me to come back."

Niko Karamanis, who will be a tri-captain with Jack McCool and Tyler Scott for Bill Kangas' hockey team next winter, said that he is on his way to Williamstown for the fall semester. Karamanis was asked about his schedule and whether he wanted to play or if he wanted to finish his Williams career on schedule.

"I think both of those things really came in," Karamanis said in a phone interview from Montana, where he was pending his return to Williamstown from his home in Courtenay, British Columbia, Canada.

"As cases tick up and as things go, there's concern. I truly believe there's a very good chance that we're going to get to play hockey in some form this year," he said. "That's why I felt comfortable enrolling. We're allowed to start practices on Oct. 15. Granted, it will be small groups and everything like that. I think we're going to be on the ice, which is a good sign.

And for Karamanis, what happens could impact whether he is on campus for the winter season. As of early August, he said he would be at Williams the entire year.

"As of right now, the plan is yes," Karamanis said. "The plan could change depending on how things work out from job perspectives and what my plan is for the summer and then moving forward. But as of right now, yes, I'd be enrolled."

While most winter sports athletes haven't had anything eliminated yet, women's basketball player Gabby Martin already lost her fall season.

Martin, a rising senior from Madison, Conn., is a two-sport athlete at Williams who plays golf as well as basketball. Williams does have a fall golf season, which was shelved along with the rest of the intercollegiate sports on the Williams calendar.

The two-sport Eph said that she'll be back for the start of the fall semester.

"For me, I'm a two-sport, three-season athlete, so sports are a huge part of my experience and life at Williams. The balance of academics and athletics is a huge part and a reason why I came to Williams," Martin said. "All fall sports are canceled, so it's difficult for my fall golf season. I'm hoping and remain optimistic that in the winter, maybe there's an abbreviated schedule for basketball and then golf in the spring.

"That's one of the factors why I would consider taking the semester off."

She said that remote learning only goes so far. Labs and the "hands-on" component is important to her, and how the fall semester goes could also determine if Martin takes some time off in the spring semester.

"We'll see how it goes in the fall, see what courses are hybrid and how things play out," Martin said. "Hopefully, it goes well. If that is the case, I would probably enroll in the spring."

Even though the women's golf team will not be competing in its shorter fall season, the Taconic Golf Club remains open, so Martin said she would be able to get rounds in to keep her game sharp.

Mikaela Topper, another rising senior from Cupertino, Calif., will be on campus in September.

"First of all, I miss Williams a ton. When we went home in March, I really felt like I didn't get to finish out my junior year the way I wanted," she said. "I've been itching to get back on campus to see my friends, see professors, staff members and my coaches. That's the first reason I really want to go back. The second reason is I don't really have anything that I would do for a year or even a semester, if I were to take time off. I have a potential job offer lined up for the fall of 2021, and it wouldn't make sense for me to say no to that or push it off."

When the winter and spring sports seasons at Williams were abruptly canceled by the COVID-19 pandemic, Topper, Martin and her teammates were getting ready to play an NCAA Division III Sweet 16 game against NESCAC rival Tufts. The Ephs stood two games away from making it to the NCAA D-III Final Four for the first time since 2013.

One of Topper's biggest concerns is that the pandemic will force NESCAC, and other conferences to cancel winter sports seasons, as the fall seasons were canceled.

"That's, of course, been on my mind a lot," she said. "At this point, I just sort of feel that it's out of my control. Obviously, the state of the whole entire country and the whole world is super uncertain. Coach [women's basketball coach Pat Manning] always says 'Control what you can control.' At this point, that's out of my hands. Obviously, I'm hoping for the best, but I'll be very upset inside if I don't get to wrap up my career.

"I don't really think there's much I can do about that."

For his part, Karamanis is looking at the glass as half-full. Spring sport athletes had received an additional year of eligibility because of the pandemic. That could eventually filter down to winter athletes, if something similar occurs.

"As much as college athletics is a part of my college career," Karamanis said. "There certainly is going to be a life after Williams. I think if I have that itch ... there are still eligibility options, whether that's going for a Master's and playing someplace else."