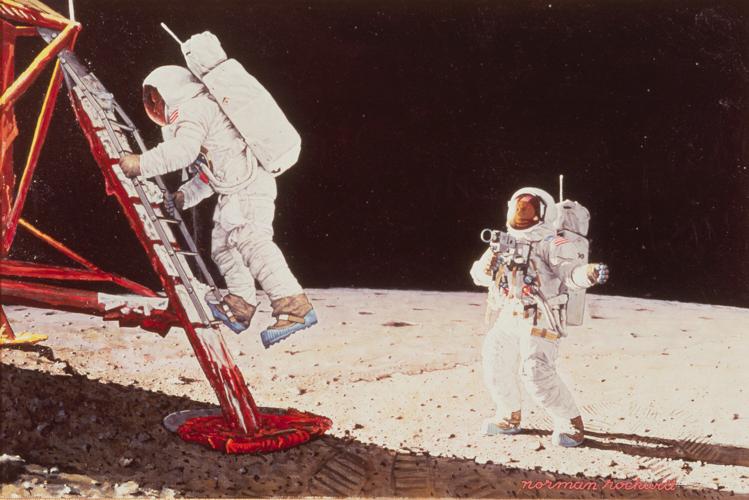 Norman Rockwell's "The Final Impossibility: Man's Tracks on the Moon," 1969, which was an illustration for Look, December 30, 1969, is on loan at the Norman Rockwell Museum from the Collection of the National Air and Space Museum, Smithsonian Institution. 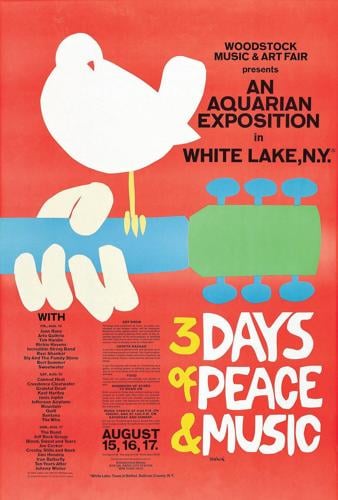 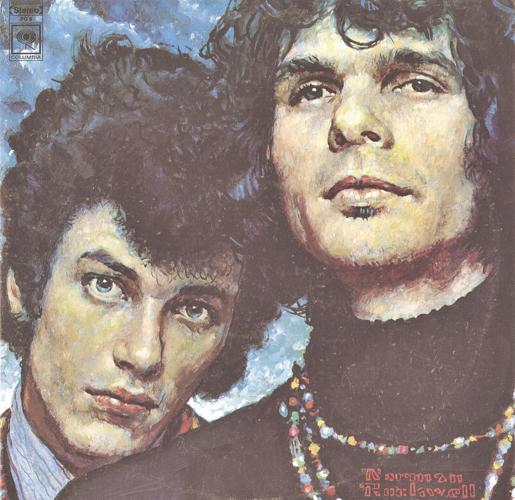 Norman Rockwell painted only one album cover during his career. Musicians Mike Bloomfield and Al Kooper, who were fans of Rockewell, contacted the artist and asked him to paint their portraits for the cover.

Norman Rockwell's "The Final Impossibility: Man's Tracks on the Moon," 1969, which was an illustration for Look, December 30, 1969, is on loan at the Norman Rockwell Museum from the Collection of the National Air and Space Museum, Smithsonian Institution.

Norman Rockwell painted only one album cover during his career. Musicians Mike Bloomfield and Al Kooper, who were fans of Rockewell, contacted the artist and asked him to paint their portraits for the cover.

STOCKBRIDGE — Fifty years ago, America was in a state of constant unrest as change swept across the nation and the world.

It was the year of Woodstock and first moon landing; the year "The Brady Bunch" and "Sesame Street" debuted; the year that Richard Nixon took office and the first ATMs came online.

"It started off as a great year and ended on kind of a sour note. On one hand, you had so much great stuff going on — like Woodstock and the moon landing. But on the other hand, you had protests, the Vietnam draft, a lot of civil strife," Jesse Kowalski, curator of exhibitions at the Norman Rockwell Museum, said during a recent phone interview. The museum's new exhibition, "Woodstock to the Moon: 1969 Illustrated," opens Saturday, June 8, and features work from over 40 artists. It also coincides with the 50th anniversary of the museum's founding.

"There were a lot of other contrasts. The Beatles performed their last concert together at the beginning of the year, and at the same time, Led Zeppelin released their debut album. Elvis was doing a comeback tour and was in Las Vegas ... It was a time when the younger generation was coming in and the older generation was [fading out]."

"Woodstock to the Moon: 1969 Illustrated," aims to show how Norman Rockwell and his contemporaries, as well as a new batch of up-and-coming illustrators, reflected the many changes in popular culture, as well as the shift in the realm of illustration.

"It was a kind of a benchmark year, as it was nearing the end of Rockwell's generation of illustration. It was the age of Bernie Fuchs and works by younger illustrators like Jeff Jones and Frank Frezetta," he said. "It was the last year the Saturday Evening Post was published and the year that National Lampoon was founded."

But the shift from his bread-and-butter Americana illustrations to those of more worldly subjects, such as the lunar landing, didn't frazzle Rockwell. The illustrator welcomed the change, he said, during a June 1969 interview with The Associated Press.

"I don't really mind because red-cheeked little boys and mongrel dogs no longer typify America ... I really get excited about doing work connected with the space program. That's what holds a lot of attention today."

A few months earlier, in February 1969, shortly after celebrating his 75th birthday, Rockwell, along with five others, flew to Cape Kennedy, where over a four-day period, he studied the Apollo 11's lunar lander and other apparatus, photographing both the equipment and astronauts for a Look magazine commission. That painting, "The Final Impossibility: Man's Tracks on the Moon," of NASA astronauts Neil A. Armstrong, standing on the moon's surface, and Edwin "Buzz" Aldrin, stepping down from the lunar module "Eagle," is on loan from The Smithsonian Institute.

"He wanted it to be the perfect painting," Kowalski said. "He spent a bit of time on it. It was done over a period of four months."

In addition to the painting, the exhibit will feature a small replica of the lunar lander.

"In our archives, there are dozens and dozens of photos of the astronauts. In one of the [display] cases, we have notes from his daily calendar where he talks about the process," Kowalski said. "It's fascinating to see what he was working on. He was working on so many different projects at the same time."

The exhibit, spread over two galleries, begins with the closure of the Saturday Evening Post, which Rockwell worked for from 1916 to 1963. Of the Post's demise, Rockwell told The AP: "I didn't mourn the passing of The Post. I stopped working for them when they changed from a family magazine to a crusader."

The second part of the exhibit focuses on illustrations depicting important news events, such as the lunar landing, while the later part focuses on the shift of illustration from magazines to music, films, television and book covers. Among those illustrations are science-fiction covers by Frezetta and Jones, as well as Basil Gogos' original painting of Boris Karloff as Frankenstein's monster, which the artist created in honor of Karloff's death in 1969.

"He painted it for the Famous Monsters of Film Land. It was the only one he got back," Kowalski said. "Gogos' widow said it was his favorite painting that he ever did. It's been hanging in their living room since he got it back. She wasn't sure, at first, if she wanted to loan it. She called us back a few days later and said that her husband was a fan of Rockwell and that she thinks her husband would be really proud to have his painting hang in [Rockwell's] museum."

While the painting has been replicated many times over the years, it is believed this is the first time it will be shown in public.

Among the items featured in the pop culture section will be archival material from Sesame Street, which began in 1969.

"We've been working on a collaboration with Sesame Street for the last few months. We'll have photos of the actors and The Muppets from the first season, animation from the show and illustrations from books. We have a pitch reel that founder Joan Cooney put together with Jim Henson for her proposal to the Carnegie Foundation. It's her and Jim Henson, with Kermit the Frog and Rowlf the Dog. We'll also have a Cookie Monster that was used on the first season of the show that will be on display. It will be a great photo op, but also something that will bring back a lot of memories for a lot of people."

Also on display will be an early version of the Woodstock concert poster created by Arnold Skolnick.

"It's not the final version of the poster, but it's one of only two like it that we know of in the world. It's a prototype. Originally, Woodstock was going to take place in Wallkill, N.Y., but the town decided it didn't want so many hippies there," Kowalski said. "The poster we have is a place holder. It has the acts and location on it, but it doesn't have the vendors or extra information on it."

Skolnick, who now resides in the Berkshires, was paid $15 for the iconic design. His work will be on display with an original Woodstock ticket, as well as numerous vintage concert posters by artists such as Greg Irons and Randy Tuten.

Jennifer Huberdeau can be reached at jhuberdeau@berkshireeagle.com, at @BE_DigitalJen on Twitter and 413-496-6229.