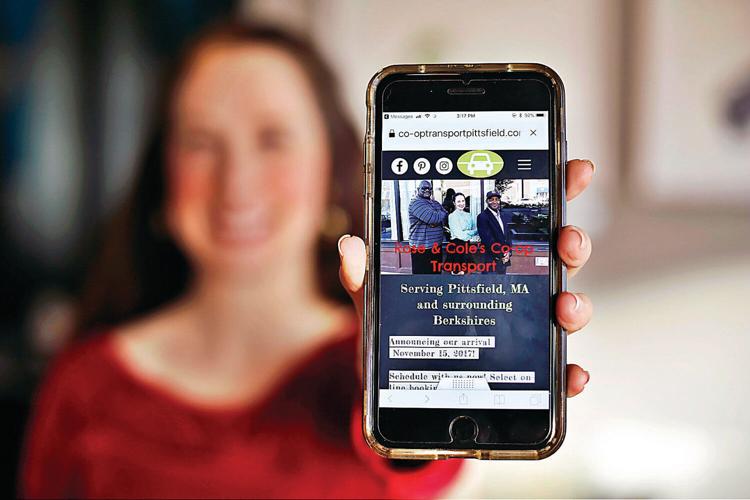 A spirit of community service is woven into the mission of Rose & Cole's Co-op Transport, a startup focusing on big gaps in scheduled Berkshire Regional Transit Authority service. 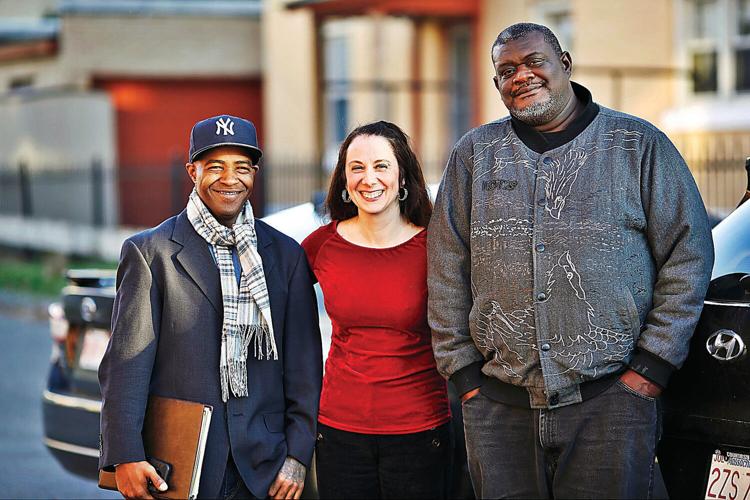 Terry Moore, left, Nicole Fecteau and Ed Rose have created Rose & Cole's Co-Op Transport, providing an on-demand ride-sharing service throughout the Berkshires, with flat rates around Pittsfield. That's not a name that quickens the pulse of venture capital types. But it is the leading edge of a homegrown, grass-roots effort that could, in time, provide transportation to thousands of people.

A spirit of community service is woven into the mission of Rose & Cole's Co-op Transport, a startup focusing on big gaps in scheduled Berkshire Regional Transit Authority service.

Terry Moore, left, Nicole Fecteau and Ed Rose have created Rose & Cole's Co-Op Transport, providing an on-demand ride-sharing service throughout the Berkshires, with flat rates around Pittsfield. That's not a name that quickens the pulse of venture capital types. But it is the leading edge of a homegrown, grass-roots effort that could, in time, provide transportation to thousands of people.

He prefers his new cargo.

On a recent Friday, Moore pulled up to the Pittsfield transit hub on Columbus Avenue in a shiny, black four-door Chevrolet Cruz, a sweet ride with heated leather seats. He had come to drop off a passenger.

After hopping out to open the door for his rider — "five-star service," he likes to call it — a young man called out to Moore with a question.

What happened next deserves mention, someday, in the history of the company Moore and others are trying to get off the ground.

You with Uber? the man asked.

No, but Moore is in the ride-sharing business, along with fellow worker-owners of Rose & Cole's Co-op Transport.

That's not a name that quickens the pulse of venture capital types. But it is the leading edge of a homegrown, grass-roots effort that could, in time, provide transportation to thousands of people.

"His Uber app wasn't working," Moore said of the man who dashed out of the station, having just missed a bus to a new job at the Lee Premium Outlets.

"It was divine intervention," Moore said.

The new nonprofit is angling to serve people just like the man who climbed into Moore's rented Cruz.

On the ride down, Moore explained that the co-op, up and running for only a month, exists to help people without cars get to jobs around Berkshire County.

"I told him not to worry about the expense of getting to work," Moore said later. "He was freaking out. I told him, 'From one brother to another, I'll make sure you get there.'"

That spirit of community service is woven into the mission of Rose & Cole's Co-op Transport, a startup focusing on big gaps in scheduled Berkshire Regional Transit Authority service.

Since federal funding lapsed years ago, the authority has had to scale back service to people who work second shifts or Sundays. Bus service ends at 6 p.m. daily.

It's a problem the authority is working to fix. It held three public hearings this month on the issue and is awaiting a report commissioned by the state Department of Transportation.

Robert Malnati, the authority's administrator, said his group is open to the idea of working with outside vendors, such as Rose & Cole's Co-op Transport, to provide off-hours transit options for county residents.

But right now, money needed to make that happen isn't anywhere in sight.

Funding for the authority's study was provided by remnants of the last federal grants that helped extend the hours of public transportation options in the Berkshires, said Anuja Koirala, senior transportation planner for the Berkshire Regional Planning Commission.

You might say the search for a solution is running on fumes.

Koirala attended a Nov. 8 hearing in Pittsfield that drew a crowd of people interested in finding ways to help people get to off-hours jobs. The problem concerns Berkshires employers, who say they have a hard enough time finding people to take jobs, especially in the service sector.

"It came up, like always, about the night shift," Koirala said of transportation. "It has been an issue."

The commission, which advises the BRTA, produced its own report eight years ago in which it found, among other things, that the authority should provide rides to "employment areas not currently served." Passengers surveyed for the 2009 report said they most wanted to see Sunday and evening service — both of which are lacking.

The new co-op has written to Koirala seeking the commission's advice, as it seeks to be a player.

"They could be one of the providers for the BRTA," she said.

But first, it must prove its ability to run a transportation business, Malnati said Friday.

"Theoretically, I would say yes," Malnati said, when asked if Rose & Cole's Co-op Transport could be part of a solution. He said he spoke briefly with some of the cooperative's members at the Pittsfield hearing.

"They're just starting out and have to get some experience," Malnati said.

Moore, a 48-year-old former Marine and New York City native, came to the Berkshires to find help and housing from the Soldier On program.

"This is my way of giving back to the Berkshires," Moore said.

"Giving back" isn't a common piece of a business plan, but Moore and his associates argue that when it comes to a problem like this, the best advocates are working people who care.

Others involved with the co-op are Ed Rose, Nicole Fecteau, Michael Hitchcock and Karen Hine.

The company's name comes from a creative combination of Rose's last name and Fecteau's first.

"If you're a co-op, you don't want your name in there too much," Fecteau said. "It works for now."

Though Moore holds a license to drive tractor-trailers, Rose has the most experience in ride-sharing, having provided service at a grass-roots level for several years.

Fecteau, who admits that she sometimes drives for Uber, brings experience in worker cooperatives. But she has also been a single mother without a car who struggled to get around.

"We've been working in different ways to help people lift themselves up," she said. "We have long realized there is a transportation crisis. We hope to work with [BRTA] to tackle the issue."

Fecteau is director of the Roots & Dreams and Mustard Seeds, two ventures that seek to help co-ops get off the ground.

Other partners and allies include the Cooperative Development Institute and Tools and Education for Social Action.

For now, the co-op is operating as a ride-sharing provider, which means it is overseen by the state, rather than the city, and does not have to equip vehicles with meters.

While that's the plan for the year ahead, Fecteau said the co-op hopes to become a limited liability corporation in a year or so. It is purchasing commercial insurance to cover all vehicles used to provide transportation, she said.

The co-op charges flat rates for rides. Fees can be found on its website, co-optransportpittsfield.com. Rides can be arranged outside the intermodal center on Columbus Avenue, by booking online or by calling 413-841-7126.

Moore said he and his partners negotiate discounts for rides, wanting to acknowledge that their clients might be poor.

"Some of the rides go free," Moore said. "Not everybody pays. Transportation is what's stopping these individuals from prospering."

A one-way ride in Pittsfield less than 3 miles starts at $6, according to the co-ops website.

"It's all about how to tackle the fact that a lot of riders are low-income," Fecteau said. The co-op's goal in the months ahead, she said, is to "grow the business and grow our customer base."

The new co-op will compete with taxi companies in Pittsfield. How is it different? Fecteau was asked.

"Co-ops have a much closer connection with community," she said. "They run on an ethos of serving their community. And the community then helps us, too."

Fecteau said the co-op wants to get to the point where it can pay a living wage to its worker-owners, a figure she calculates at $17 an hour.

"Right now we're not able to meet that goal," she said.

On Friday, Moore was heading out on West Housatonic Street to see what a mechanic thought of a 15-passenger van the co-op might purchase.

It had been a busy week, and the outfit was picking up mentions on Facebook. Rose, Fecteau and Moore went to look at office space as well.