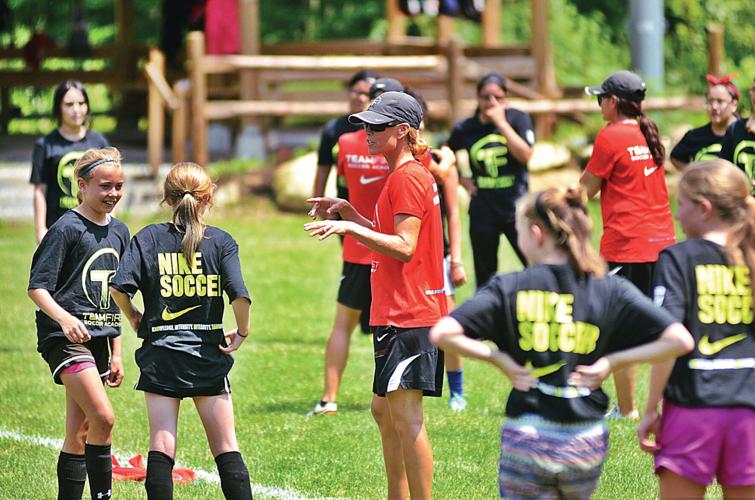 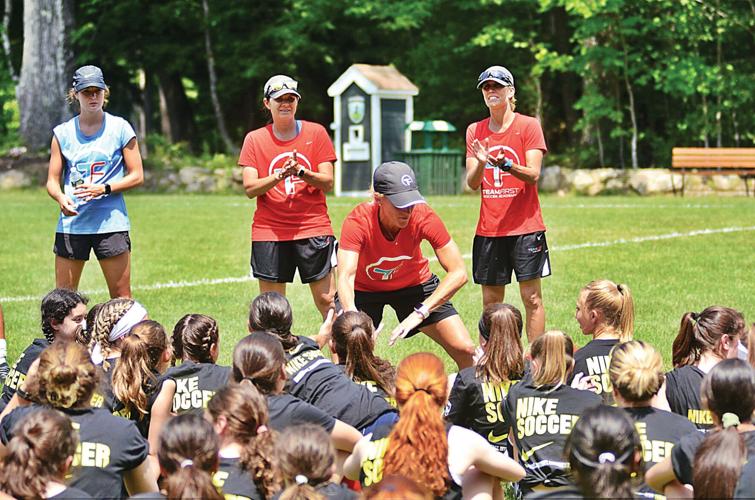 From left to right, in red: Mia Hamm, Kristine Lilly and Tisha Venturini-Hoch in East Otis on Friday. 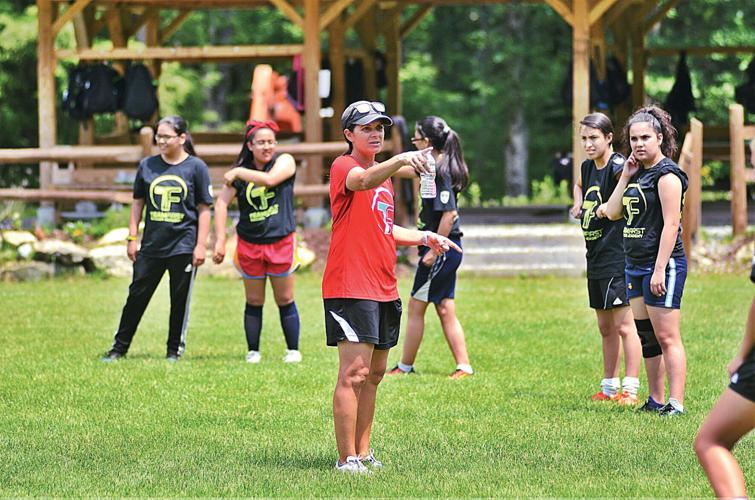 From left to right, in red: Mia Hamm, Kristine Lilly and Tisha Venturini-Hoch in East Otis on Friday.

EAST OTIS — The experience of attending a soccer camp at Berkshire Soccer Academy is truly unique. One only had to look at the guest coaches on Friday afternoon to figure that out.

Tucked in the woods near the Otis Reservoir, former World Cup and Olympic champions Mia Hamm, Kristine Lilly and Tisha Venturini-Hoch all gathered with a group of about 50 young girls, dishing out secrets on what helped them excel at the sport that everyone there was in love with.

The trio are at the BSA as the leaders of TeamFirst Soccer Academy. Now back for their fourth year at the BSA site, Hamm, Lilly and Venturini-Hoch are nearing their seventh anniversary running TeamFirst.

As to why they are in the middle of nowhere on the edge of the Berkshires?

The relationship forged between the two soccer academies has been blossoming ever since TeamFirst walked on the campgrounds of BSA.

Hamm, Lilly and Venturini-Hoch are all united in their desire to teach a younger generation about the game that gave them a career. At BSA, founder Dan Zenkel and directors Eric and Liza Wittenberg have committed themselves to hosting a camp that mixes the intensity of a soccer-specific academy with a traditional summer camp.

The two groups were introduced through Cori Boyle, who is the executive director for TeamFirst and an advisory board member for BSA. Combined through that relationship from Boyle, the TeamFirst sessions at BSA have morphed into a dynamic and engaging couple of days for campers.

"It's a great atmosphere, Eric and Liza and Dan run a tight ship and it's really organized," Venturini-Hoch said. "They have great staff. Just easy.

"We work hard in the hours that we need to work, then we get to enjoy the lake, and arts and crafts, and we've been playing pickup with the staff. I just think it's a good group of people who love the game of soccer, and were interested in teaching these kids and helping them become better individuals."

On Friday, BSA and TeamFirst hosted a one-day clinic for a few different groups from around the region, including Soccer Without Borders out of Boston, and a group of young girls from The Fieldhouse — the indoor turf facility located in Caanan, N.Y.

The one-day clinic came a day after the BSA and TeamFirst wrapped up the first of their two, two-day clinics.

Whether at the two-day clinic, or the one-off event, TeamFirst is at BSA to teach campers how to be better at soccer, and have fun while doing it.

"Being around them and showing them that we are human," Lilly said when asked about her favorite aspect of the TeamFirst camps. "We make mistakes out there, we laugh at them, we have fun, and let the kids know that's OK, that's all OK, and you can be successful with all these little mistakes and having fun and all that stuff."

TeamFirst's philosophy revolves around three characteristics: Be a personality, be a playmaker, be a factor.

"It's easier for the kids to learn instead of sharing 15 points each session," Hamm said of their philosophy. "You are really talking about being a personality, and what we say with that is there are going to be 1-v-1 matchups all over the field, on the attacking side and defensive side. Don't shy away from those opportunities.

"A playmaker, same thing: How do you connect with your teammates? How do you control the flow of the game? There are different ways to be a playmaker. Then the factor is, we can all play a role in the success of our team."

And while the camp features some star power, there is substance behind the fireworks. The credentials for Hamm, Lilly and Venturini-Hoch speak for themselves. A combined five Olympic gold medals, five World Cup titles and 12 NCAA titles only scratches the surface.

That level of skill has impressed more than just the campers. Counselors at BSA — no slouches, themselves — were also enjoying having such successful athletes to learn from.

"Being able to watch Mia Hamm and all these people has been awesome," said Bennie Lopez, a former Monument Mountain student who just finished up a postgraduate year at the Westminster School. "I've learned so much already, just in the past two days having them here. I've learned a lot from them. It's been very rewarding for myself, but it's also fun trying to make it a good experience for the campers."

Hamm, Lilly and Venturini-Hoch agreed that the BSA leg of their TeamFirst camps are highlights because of the unique environment. Instead of cramming in soccer, soccer, soccer — the BSA experience calls for intense training — there are extracurricular activities scattered in. Located on the edge of a lake, BSA offers campers the chance to fish or paddleboard in the water, or hike on the trail that surrounds the site.

For Hamm, offering the change of pace is key to making their time at BSA what it is.

"I think it's amazing for these young players. One, getting to meet people from all over the country. One of the things you have in common is your love for the game. Then, you are able to do the other electives. ... That kind of opens you up to exploring new options."

With both BSA and TeamFirst continuing to grow and expand their offerings, the hope is there that this unique union continues in years to come. For TeamFirst, that continuation means they can keep coaching the next generation of soccer talent, both on and off the field.

"Look at the name of our camp, it's TeamFirst, we care about kids being good people and good citizens and good teammates and good friends," Venturini-Hoch said. "That's a huge part of what we bring, and we encourage that a lot. We hope to see them, if anything, take away something from that side. [It's] great if your skills get better and you get better as a soccer player, but we are also equally as interested in a kid becoming a better kid and aspiring to be great."