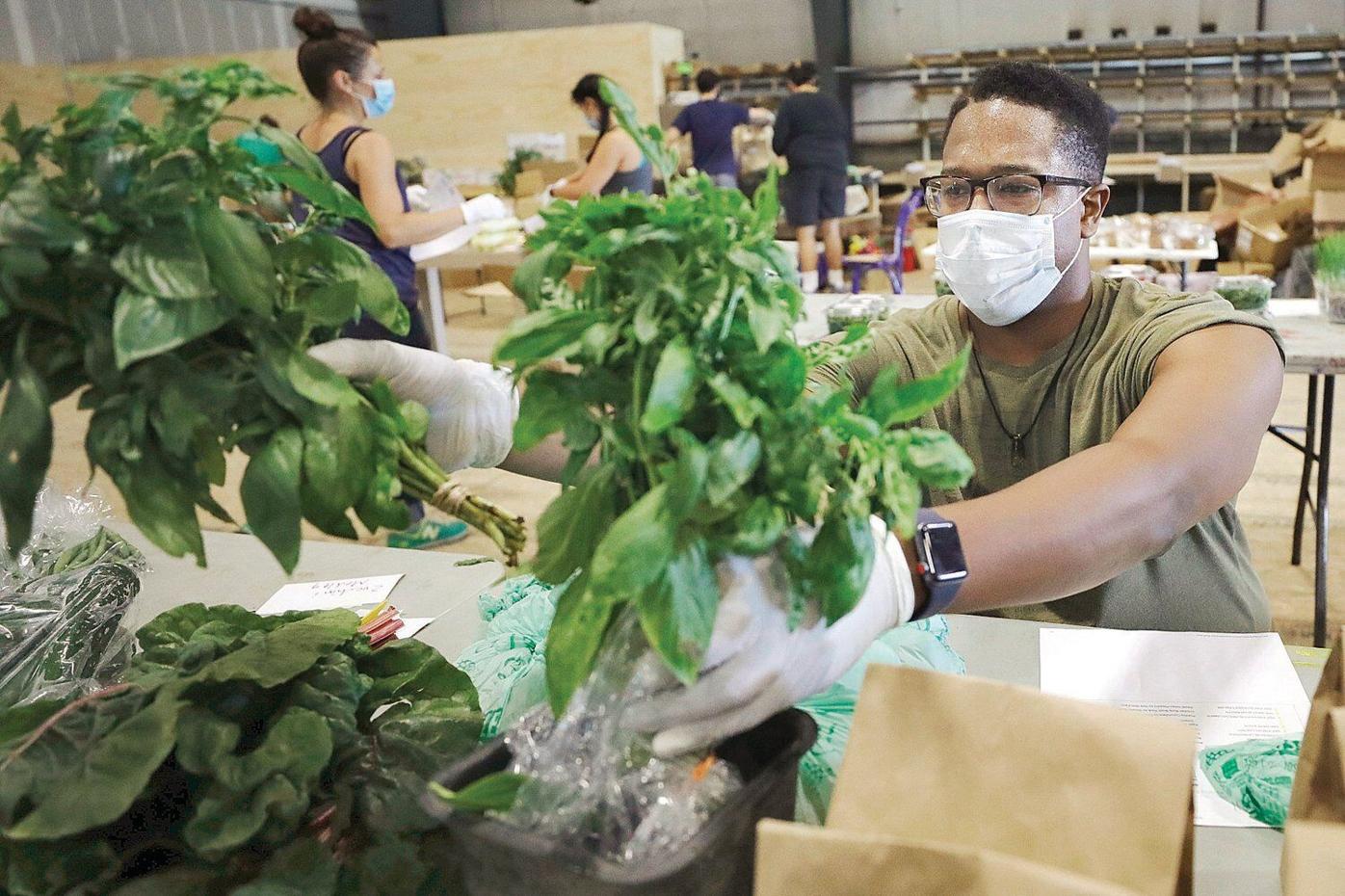 Dante Brown packs orders for the Roots Rising Virtual Farmers Market in Pittsfield. Brown, a choreographer and dancer paired with Roots Rising and Jacob's Pillow, is one of six artists working with Artists At Work, a pilot program modeled after the WPA. 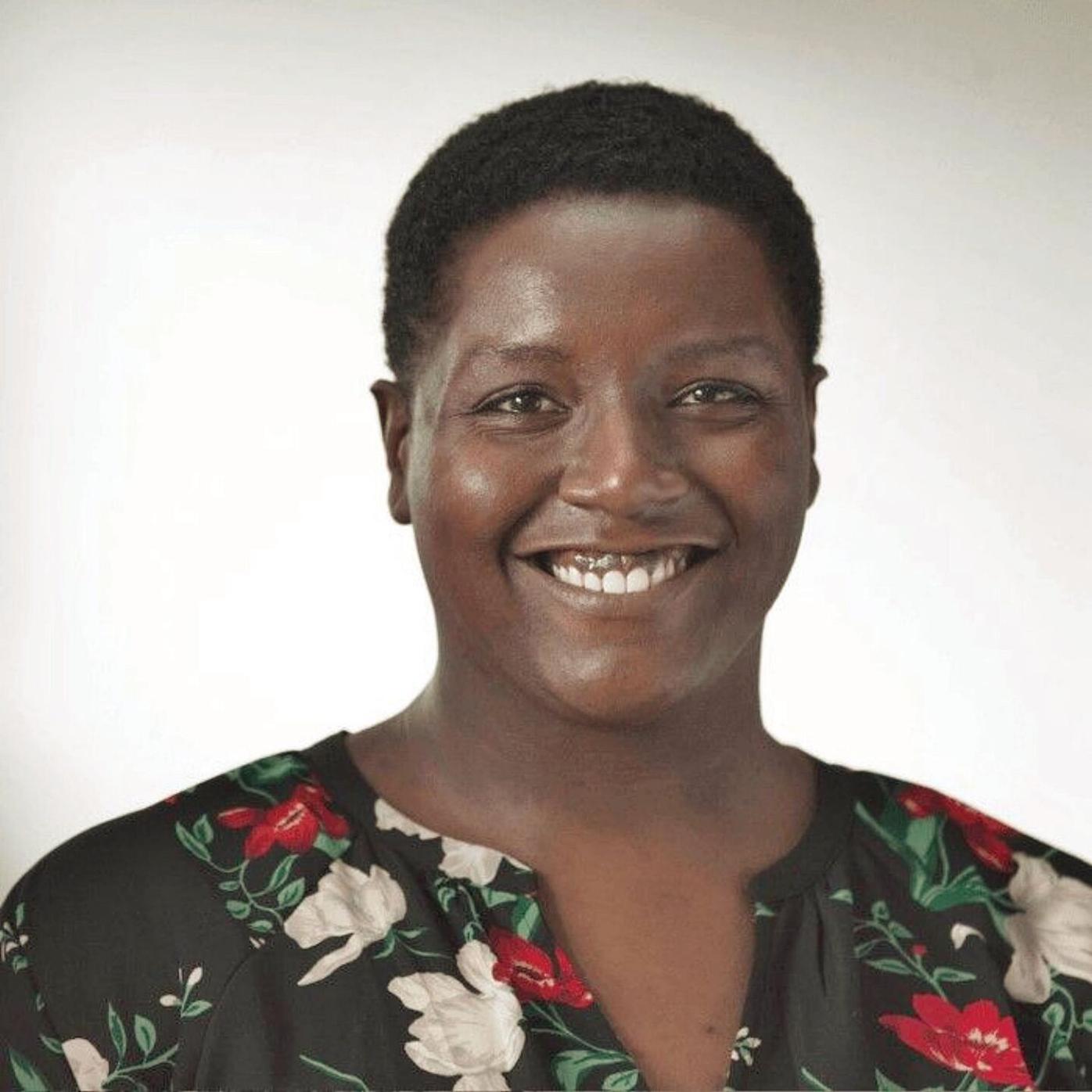 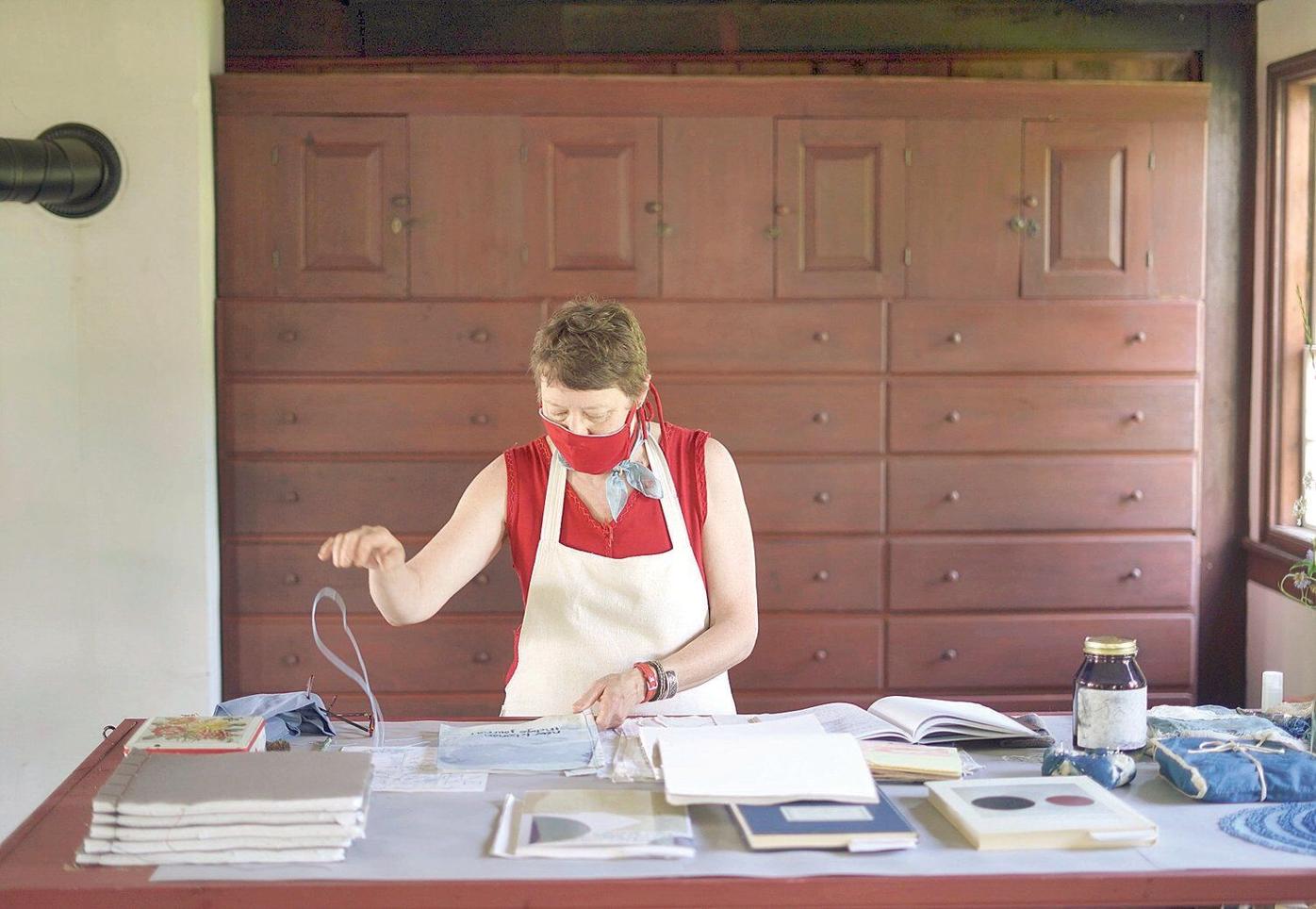 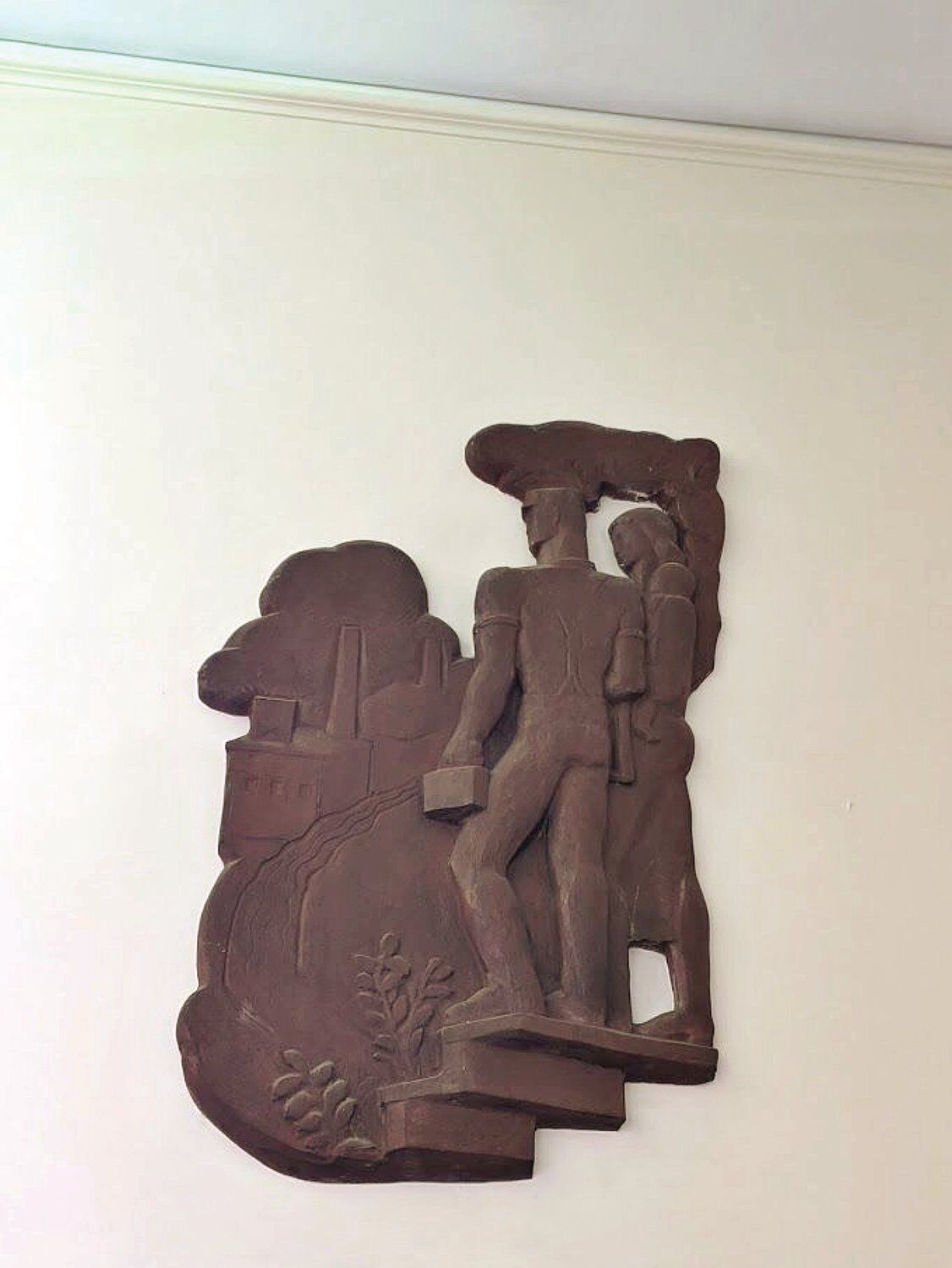 A cast stone bas relief panel depicting mill workers in North Adams was one of three panels commissioned for the North Adams Post Office by the Depression-era federal Works Progress Administration. This panel and another of workers digging the Hoosac Tunnel are still hanging in the post office's lobby.

Dante Brown packs orders for the Roots Rising Virtual Farmers Market in Pittsfield. Brown, a choreographer and dancer paired with Roots Rising and Jacob's Pillow, is one of six artists working with Artists At Work, a pilot program modeled after the WPA.

A cast stone bas relief panel depicting mill workers in North Adams was one of three panels commissioned for the North Adams Post Office by the Depression-era federal Works Progress Administration. This panel and another of workers digging the Hoosac Tunnel are still hanging in the post office's lobby.

A narrative collection of poetry, "An Epic of the Unspoken," written during those "in-between moments," has been a work-in-progress for over two years.

"As a society, we don't fully see how an artist works; what it takes for art to be made — whether it's on stage, a book or in a gallery," said Russell-Self, who uses the gender-neutral pronouns they/them/their, in a recent interview with The Eagle. "The art you're seeing is just [from] the people that have found a way to make those snippets of time work."

In July, Russell-Self was one of six artists selected to participate in a pilot program Artists At Work, which allows them to make their art while receiving a living wage — about $15,000 over six months — and health insurance benefits, with the possibility to renew for another six months. The catch? In addition to producing a work of art that can be shared publicly at the end of the first six months, the participating artists' are working with a cultural institution and social initiative-focused group addressing issues such as substance abuse and poverty, mental health, and food justice.

Artists At Work, the pilot program launched in Western Massachusetts on July 1, is a collaboration of The Office Performing Arts + Film, an independent curator and production company based in New York and London and the FreshGrass Foundation, which produces the annual FreshGrass Festival, as well as national partners, the Sundance Institute, the International Storytelling Center and Theater of War Productions. It's modeled after the New Deal's Works Progress Administration. During the bleakest years of the Great Depression, the WPA put millions of Americans to work, including more than 40,000 actors, writers, musicians and artists. Work by those artists, such as Louis Slobodkin, of Albany, N.Y., who was commissioned to create three sculptures for the North Adams Post Office, can still be seen today.

Rachel Chanoff, founding director of The Office, said the idea to create a program based on the WPA program came shortly after the pandemic shuttered businesses and a vast majority of the arts community were among the unemployed.

"Immediately, everyone's income was decimated. We knew that relief funds were crucial. It's important to give an artist this month's rent, we also wanted it to be sustainable," she said. "In this kind of scorched earth moment, is there an opportunity to create something that would put us on a path to a more just future for artists? We saw this as a way to build something new; to honor the artists."

By putting the artists on The Office's payroll, instead of providing them with a grant or stipend, she said it will allow them to apply for unemployment when the program is over, if they so choose, and the option to continue their health insurance through COBRA.

"It prioritizes the art and takes care of basic needs. Trying to work as an artist, while also working at a 'stable and benefited job' takes time and in the nonprofit world, it takes a lot of time," Russell-Self said. "You don't do your best work when you're trying to fit it in in-between things. Given resources and the time, what you're able to accomplish just soars. I'm amazed at how much I've been writing in the last month; at what can be done when I'm not worried about what I have to do to make sure I have rent on time."

Chanoff said the plan is to expand Artists At Work to other areas of the country.

"A big part of the project is, asking: Who is an artist?' Who gets to define who an artist is? It's about going into a region and working with the organizations there," said Chanoff, who also serves as curator of performing arts and film at Massachusetts Museum of Contemporary Art. "In Baltimore, we've been talking with a collective of pinata makers. It brings up that question of who defines who an artist is. Of course, a pinata maker is an artist."

Western Massachusetts was chosen for the pilot program, she said, because the arts play a major role in the region's economy, as well as the fact that it had numerous and diverse cultural organizations to work with.

"We wanted to work with some smaller organizations, with audiences under 200,000, that were more constituent facing," she said. "We're really so thrilled to have such a mix of artists and social initiatives."

Mass MoCA, Hancock Shaker Village, Jacob's Pillow, The Mount, Images Cinema and the Institute for the Musical Arts, in Goshen, each selected an artist to work with over the six months. The artists will participate in online dialogues with artists and advisors at their cultural institutions, while also working with their chosen community outreach initiative.

Dante Brown — a dancer, choreographer and artistic director of Dante Brown | Warehouse Dance — paired with Jacob's Pillow and Roots Rising and is interested in the ideas of sustainability and personal self-worth, and connecting those ideas with the rest of the world through movement and dance.

"My immediate response [to being partnered with Roots Rising] was how can I help the organization? How can I amplify that?" he said. Brown will explore ways to integrate ideas of food equity and sustainability with sustainability of mind, body and spirit in marginalized communities.

To better understand the work of Roots Rising, beyond Zoom meetings with its co-directors Jessica Vecchia and Jamie Samowtiz, Brown is immersing himself in it. Recently, the Leeds-based artist traveled to Pittsfield, where he spent a full shift prepping packages for Roots Rising's virtual farmers market distribution.

"I want to connect with the farmers, interview them and get their side of the story. We, as a community, take for granted how much they do, the sacrifices they undertake as participants in this community. It's a beautiful martyrdom that we don't talk about," Brown said.

He plans to make a mini-documentary, hold community workshops and perform dances made in response to his experiences.

"I want to show the love and care this community has," he said.

Brown also plans to camp in the spaces that Roots Rising inhabits and to explore the history of Black community members in Western Massachusetts.

"I'm a transplant to Western Mass. It's an area where community is a 'community' with a capital C, in the most lovely way," he said. "But there's a history and story that is missing or invisible, not talked about, not spoken about. I want to camp out and follow the Underground Railroad trails; talk with officials, talk about W.E.B. Du Bois, get a better idea what is the Black history in these spaces. I'm making a solo project, that I'll perform, in response to my research."

Russell-Self is working with The Mount and The Rusty Anvil, an organization that reconnects marginalized communities with the natural world. With the Rusty Anvil, Russell-Self will engage LGBTQ youth through a series of workshops that support creative expression, reflection on identity and connection with nature.

"There's an Instagram page happening as a continued online archive," Russell-Self said of Instagram account, @reclaim_your_liberation, which offers writing prompts and artistic expressions focused around the "Reclaim Your Liberation" a project "reclaiming the whole being for queer people of color based in poetry, nature and rest."

A "Reclaim Your Liberation" forest bathing weekend trip, a collaboration between Russell-Self and The Rusty Anvil, took place over the weekend.

"One of the ways move forward is to focus on what artistic expression emerges from the land; what that journey of reclamation looks like and art being the way we can express that with the least amount of language or human influence," said Raei Bridges, founder and lead guide of The Rusty Anvil. "We'll take a weekend, bring a group out into the land for forest bathing, conversation, movement and explore ways of reconnecting to our body and see what type of art and artistic expression comes out of that."