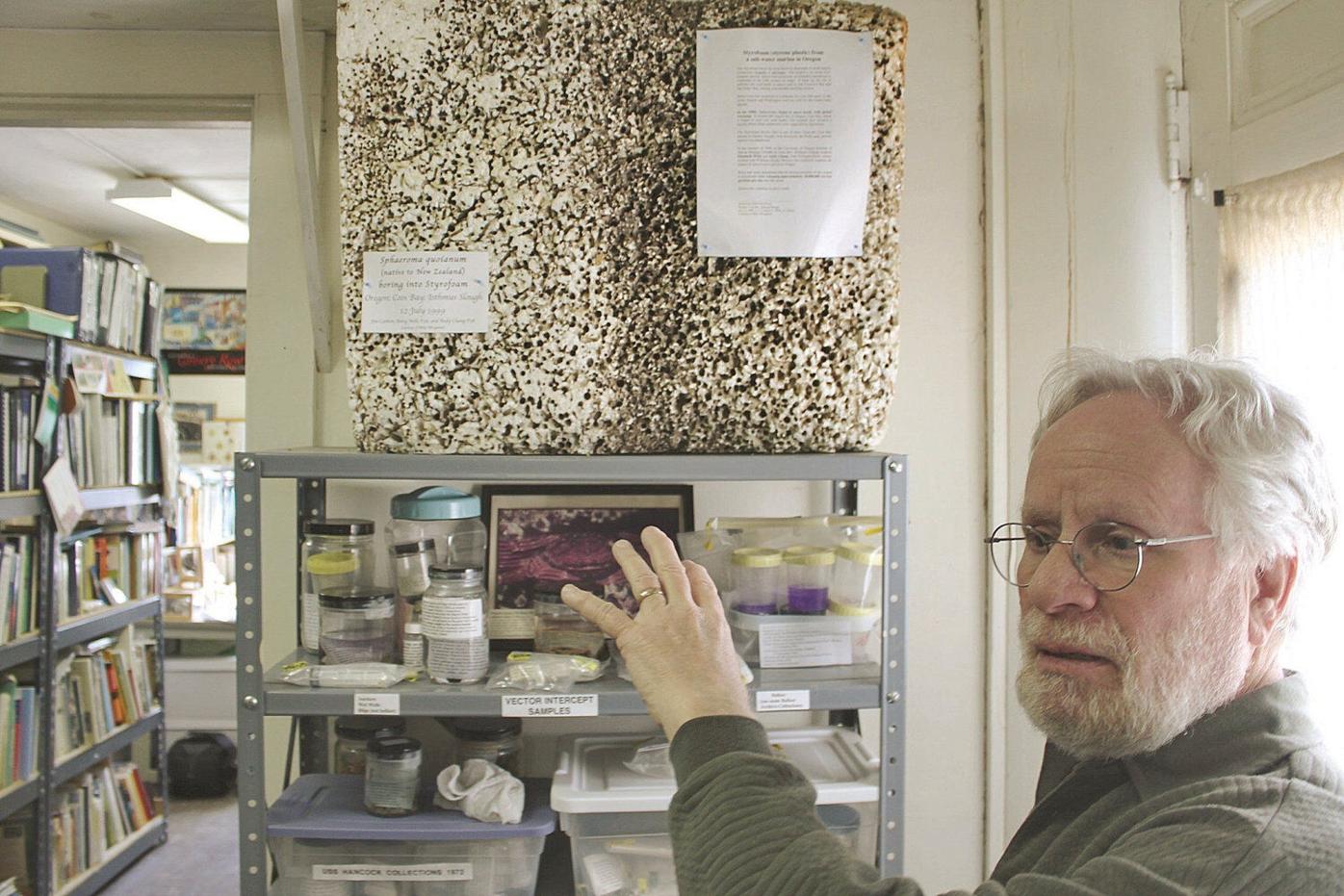 Jim Carlton gestures toward a rack of specimens in his office. Above, a piece of Styrofoam collected in Coos Bay, Ore., that has been bored into by a crustacean native to New Zealand. 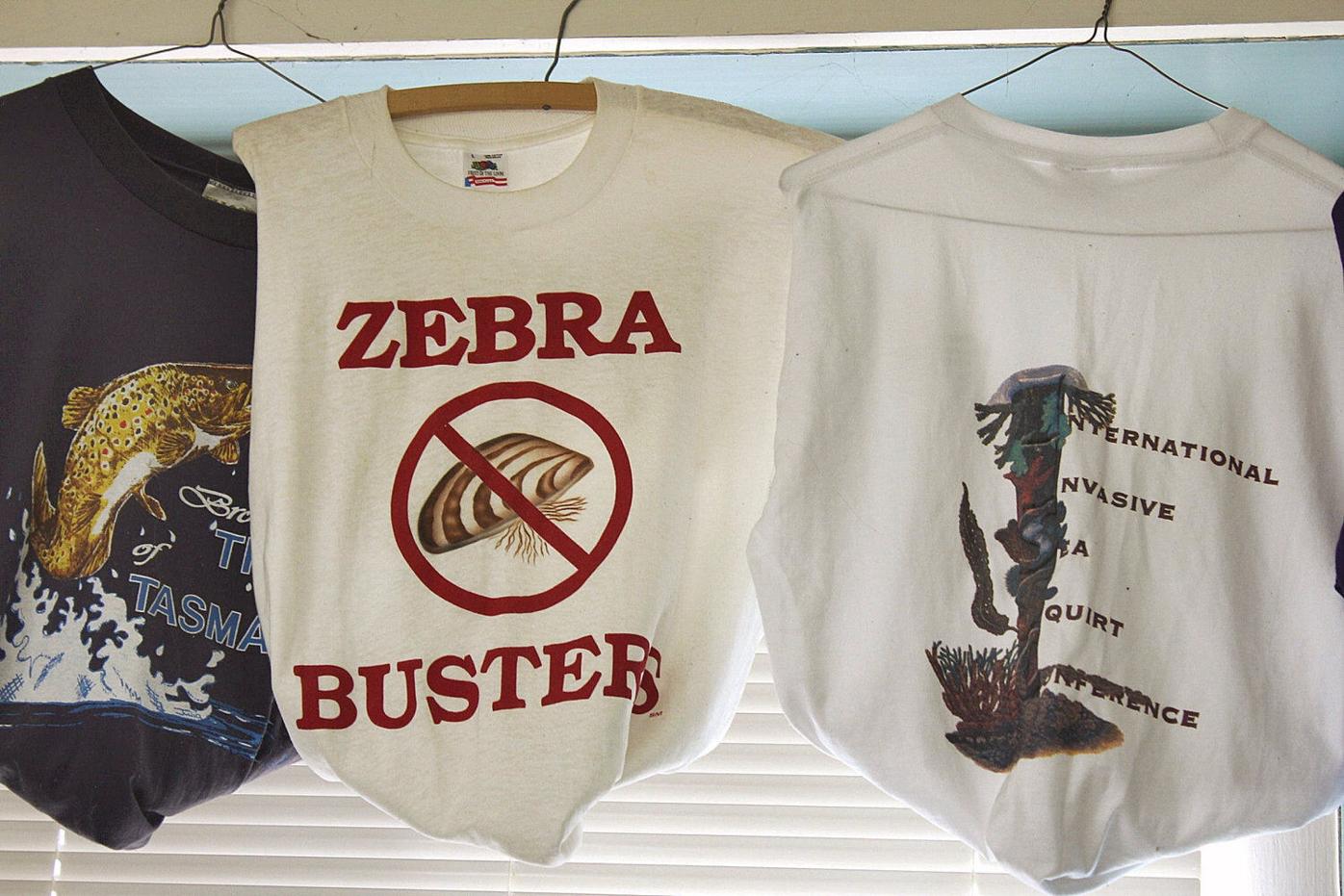 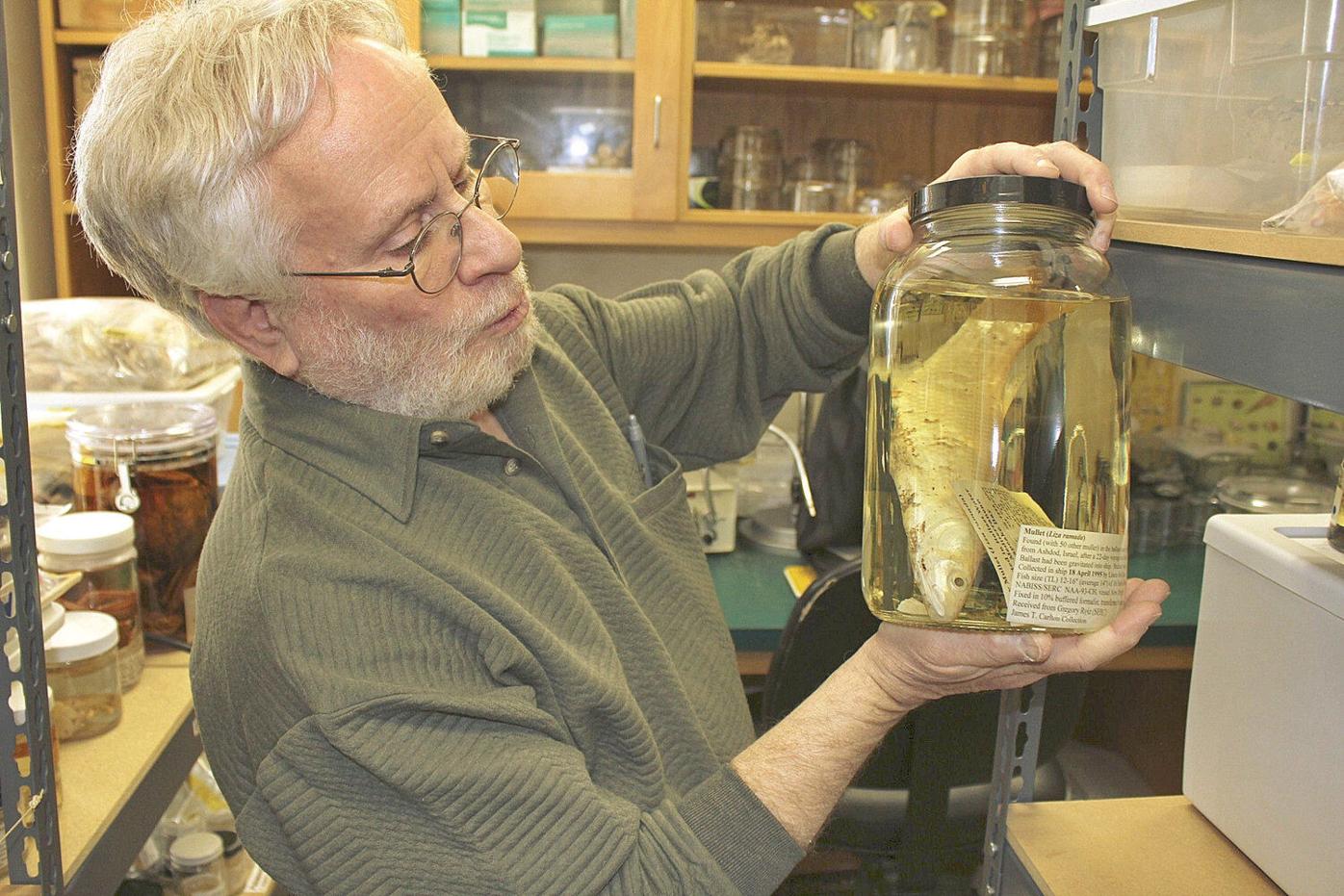 Jim Carlton, a researcher at the Williams College-Mystic Seaport Maritime Studies Program, built his career looking at how marine communities and organisms, like the preserved fish specimen above, change over time.

Jim Carlton gestures toward a rack of specimens in his office. Above, a piece of Styrofoam collected in Coos Bay, Ore., that has been bored into by a crustacean native to New Zealand.

Jim Carlton, a researcher at the Williams College-Mystic Seaport Maritime Studies Program, built his career looking at how marine communities and organisms, like the preserved fish specimen above, change over time.

MYSTIC, Conn. — One September day in 1962, a 14-year-old boy was walking the shore of an urban lake in Oakland, Calif., when he stepped on something crunchy. He brought it home.

"My mother relegated it and I to the basement," said James T. Carlton, 71.

The question of how a tube worm from the South Seas got to a California lake drove Carlton on a decadeslong journey into the topic of invasive marine species, first as a hobbyist, and later as a doctoral researcher and pioneer in an emerging field.

The teenaged Carlton had gone to his local nature center to identify his finding. He matched it to a tube worm on display. "What on Earth was it doing in Lake Merritt?" Carlton asked himself. "I just became fascinated."

Twenty years later, in 1982, Carlton joined the faculty at Williams College, teaching and conducting research at the Williams College-Mystic Seaport Maritime Studies Program. The program is associated with Williams but located in Mystic, Conn., where Carlton lives.

He was the program's director from 1989 to 2015, when he stepped down to pursue research full time; he commutes to Williams for meetings.

Carlton built his career looking at how marine communities, or the various organisms found in a marine environment, change over time. Species can be added, through invasion, or removed, by extinction.

The tube worm and other species Carlton collected at Lake Merritt decades ago were invasive species brought to California waters by human activity.

Two scientists familiar with Carlton's research say his work pushed the boundaries of marine biology and changed how scientists and the public think about invasive species. Carlton's findings have been the basis for policy that affects the public. For example, his work with ballast water — the liquid discharged from boats — has led to legislation at the regional, national and international levels.

Linsey Haram, a 2008 student at the program and Carlton's former research assistant, said his work is influential.

"I'm reading a paper that cites him 10 times and I'm like, `Oh yeah, right. He's kind of a big deal,'" said Haram, a post-doctoral researcher at the Smithsonian Environmental Research Center. "You wouldn't know that from interacting with him. There's no ego involved."

John Chapman, an adjunct faculty member at the Oregon State University Department of Fisheries and Wildlife, met Carlton and instantly felt he was unique.

"Almost no scientist has invented a field," Chapman said, but Carlton came close. Before Carlton, a handful of people worked on invasive species, but the field lacked cohesion.

Carlton introduced Chapman to the idea that invasive species are moved around the planet by human activity. "To me, that was Earth-shaking," Chapman said.

Early in his career, Carlton was just one of a handful of researchers studying invasive species. In the 1970s and '80s, the number of marine biologists who studied invasive species could be counted on one hand, before the field's popularity exploded in the '90s and 2000's, Carlton said.

"In science, you get this interesting position — that I would get early on — if it was important, then everyone would be working on it," Carlton said of studying invasive species.

In the course of his career, Carlton introduced terminology that reflects a change in the way scientists approach thinking about invasive species and how they invade new areas.

In a 1996 research article, Carlton introduced the word "cryptogenic." It it used when scientists do not know whether a species is native or invasive to an area. In introducing this word, Carlton forced scientists to think about how human history and biology overlap.

Centuries of ships navigating the globe introduced species both intentionally and unintentionally. Back in the 1800s, it was unclear which organisms came from where, Carlton said. Yet for hundreds of years, Carlton says, scientists worked under the assumption that if they did not know the history of a species, they would assume it was native.

Changing that approach was no small feat, Chapman said.

"To convince them that things were not always there, that [species] had moved around through human activity — that was just a monumental accomplishment," Chapman said.

Chapman, who has collaborated for decades with Carlton, said he has witnessed how Carlton's thinking has evolved, expanding to include how other fields, like ecology and disease, interplay with marine biology.

"He doesn't just stay in one groove," Chapman said. "He's just trying to push everything forward. And in a monomaniacal way, he does and he has."

Carlton said he remains in contact with hundreds of students, including a third of the students from his first semester of teaching at the Williams College-Mystic Seaport Program in 1982.

Zara Currimjee, a 2015 Williams graduate who spent the fall 2011 semester in Mystic, credits her experience at Williams with introducing her to ocean conservation.

"I grew up with the ocean as part of my background, a fun thing," said Currimjee, who is from Mauritius, an island in the Indian Ocean. "I didn't know that I could do ocean conservation as part of my job."

Currimjee works as the manager in the CEO's office of Oceana, an international advocacy group for ocean conservation. Currimjee carries one of Carlton's lessons into her personal life.

"It's a five-year rule. If something bothers you, think if it will matter five years from now," Currimjee said. "If not, let it go."

Haram remembers Carlton as "a super inspirational teacher" who would engage students by casually asking questions that drove students to seek out answers on their own.

As a student and as a visiting lecturer at Williams College-Mystic Seaport this past spring, Haram said she has benefited from Carlton's mentoring.

"He's always micro-mentoring," Haram said, by sneaking in little comments that spark interest. "He has a way of putting in big ideas in subtle ways that you don't realize are big ideas at the time," she said.

Seasoned researchers aren't immune to Carlton's micro-mentoring, either. "It's hard to claim you're unique," Chapman said. "Almost everything that I think is my new idea is something that I internalized from him."

Carlton attributes his productivity to the schedule he keeps and his "very, very tolerant" wife, Debbie. The couple have no children.

"Sunday morning and Wednesday afternoon are not detectably different," Carlton said, who has worked seven days a week for decades. "When I sleep, I sleep well. I just object to the concept."

Carlton's online resume is 14 pages long. It boasts a "partial listing" of over 90 publications that bear his name, plus awards conferred to Carlton from the likes of Pew Research Center, Smithsonian Institution, the U.S. government, the California Academy of Sciences and Williams College, among others.

Carlton's office — an entire floor of a house converted into administrative space — reflects his prolific career and sense of humor. T-shirts printed with puns about invasive species hang on two walls. Filing cabinets organize everything from hundreds of research articles to thousands of samples.

Among the samples is the tube worm Ficopomacus enigmaticus, the same species of tube worm that Carlton found years ago on the shores of Lake Merritt. At that time, the worm was called Mercierella enigmatica.

This year, Carlton's travel was to take him to the Galapagos, Oregon and Chile for research. He planned to assess species present in Long Island Sound. Slowing down is not something he has in mind, Carlton said.

Carlton wonders aloud how he has been engaged with his pursuit for so long.