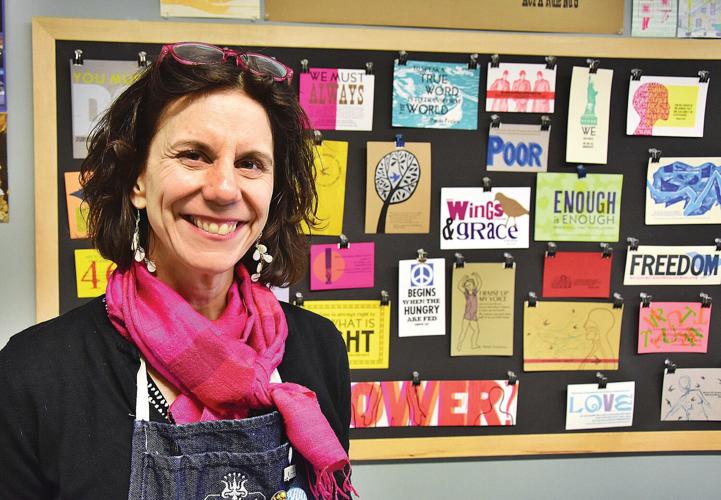 Melanie Mowinski stands in front of a bulletin board displaying some of the 50 Card Project in her studio, classroom space at MCLA. 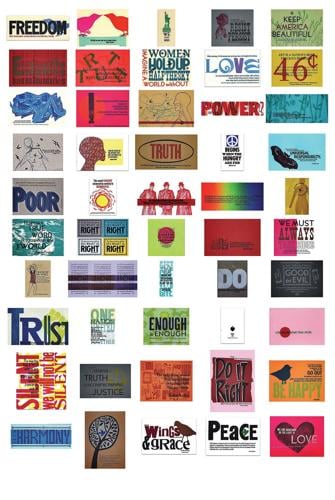 Mowinski created 50 cards, one card a week, a year-long response to the first year of the Trump Administration. 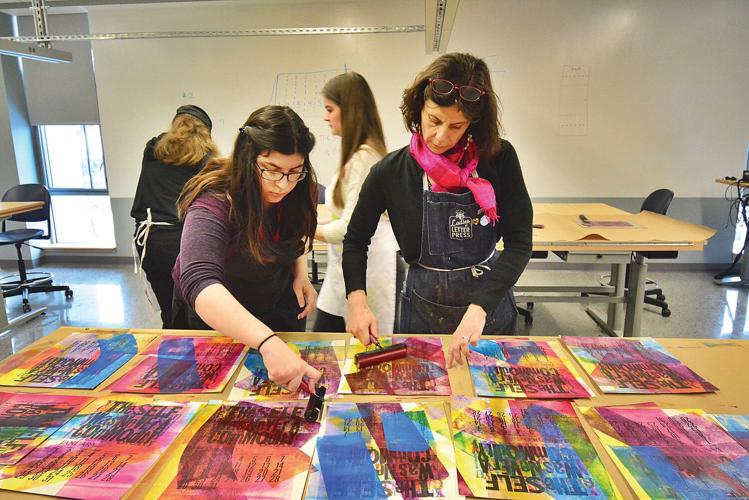 Melanie Mowinski instructs students as they work on a project in her classroom space at MCLA.

Melanie Mowinski stands in front of a bulletin board displaying some of the 50 Card Project in her studio, classroom space at MCLA.

Mowinski created 50 cards, one card a week, a year-long response to the first year of the Trump Administration.

Melanie Mowinski instructs students as they work on a project in her classroom space at MCLA.

NORTH ADAMS — As she followed through on her plan to create a postcard for each week over the last year, there would be some weeks it was hard for Melanie Mowinski, associate professor of visual arts at Massachusetts College of Liberal Arts and founder of LetterPRESS as a Public Art Project, to decide what she wanted to say.

For week 47, there were at least five things in the news that she wanted to mention, but in the end, she settled on a decision to release public land in Utah, a place where she'd traveled earlier in the year.

"This little piece of information got lost in the shuffle," she said. "And I felt I had to do something about that."

That week's card features an image of a tree, with a bird, and a quote by a Native American leader about protecting the Earth for future generations.

Mowinski's "50 Card Project" was a year-long response to the first year of the Trump Administration. Each week, she designed one postcard, printed out on the letterpress in her studio, and sent to subscribers and out into the world. A complete set has been gathered together for a show at MCLA's Gallery 51.

Mowinski said she struck on the idea very quickly — in the days around the Inauguration Day on a walk around the woods, right up to starting a Kickstarter campaign to keep her on schedule.

Mowinski and her printing press first began printing cards for events as part of a public art project on Main Street, and now she's moved it to her studio at Bowman Hall at Massachusetts College of Liberal Arts, where she teaches.

"The cards are always positive," she said. "That was the mission, they had to be inspiring, maybe a little cheesy, something you'd want to put on your refrigerator."

Some of them are a direct response to events in the news, like Week Four, when Senator Elizabeth Warren was rebuked by Senate Majority Leader Mitch McConnell with the now infamous phrase "nevertheless, she persisted."

Week in and week out, the process remained much the same. On Thursday, she would think about the news, then on Friday she'd come up with a plan for what she'd do.

"There were some weeks I had no idea what to respond to," she said. "Sometimes, I knew immediately. Those are better weeks, because I have Monday, Tuesday,Wednesday to think about what I want to do. Sometimes, I'd come on Friday morning and I'd have to figure it out. Those were harder days."

Sometimes, they would have a strange dialogue with events as they developed. Week 30 wasn't finished until the following Monday, in which violence erupted during protests in Charlottesville, Va., and the president was notably reluctant to condemn it. That week's quote, form Elie Wiesel, "We must always take sides."

She printed 100 of each. Some were preserved for collections, and about 65 were sent out to subscribers of her Kickstarter campaign — some got all 50, others a random selection and others just a digital image emailed to them.

About 20 were reserved to be sent around to political leaders. That included the president, cabinet members, leaders of Congress. Senator Warren was included, but no comment from her office about if they were received.

She said she wasn't bothered there was no response.

"Mail art is one of those things that there are a lot of people who touch the mail," she said. "Maybe it is not the person to whom it is addressed who has the biggest response. These are things I'll never know."

With a project of this sort, there were lots of opportunities to try new things, to think about other artists working in politics today and how they are doing. She's done things she hasn't before — like making a "rainbow roll" for Week 24 to celebrate Pride Month, with a quote from slain activist Harvey Milk ("It takes no compromise to give people their rights. It takes no money to respect the individual. It takes no political deal to give people freedom. It takes no survey to remove repression.").

She had help from MCLA junior Amanda Romanelli, who designed Week 10, responding to proposed cuts to the National Endowment for the Arts with a quote from President Lyndon Johnson on creating the NEA ("For it is in our works of art that we reveal to ourselves and to others the inner vision which guides us as a nation. And where there is no vision, the people perish").

Mowinski said some of the works are very personal. Week 40 features a pale pink background with a darker pink dot, and the simple sentence "life starts when fear ends." It is a line she saw outside a pavilion at the Venice Biennale this year, and it struck a chord with much of what she has seen herself as a professor.

"I'm always amazed at how many students say fear is the thing that holds them back when it comes to pursuing anything related to the arts," she said. "How would it be if there was no fear?"

Others are a bit of an inside joke. Week 29 was a slow week, so she chose a cartoon image of a young woman. She often assigns it to students to make up a quote to go along with it, to demonstrate how words can change an image's meaning. For this time around, she added a quote from Gandhi inspired by the president's treatment of Attorney General Jeff Sessions. "It's always been a mystery to me how people can feel themselves honored by the humiliation of their fellow beings."

The work will be shown in chronological order, each in its own frame, and with a small note to describe what was happening at the time.

Arthur De Bow, curator of MCLA's Gallery 51, said he has known Mowinski's work for a long time, and was one of the first to subscribe to her Kickstarter campaign.

"It's been on our radar for quite a few months," he said. "At least halfway through the project, we realized this was something artistically and conceptually that we wanted to show, and needed to get a broader audience."

When: Exhibit opening 5- 7 p.m. Thursday. Exhibit will be on display Thursday through March 24