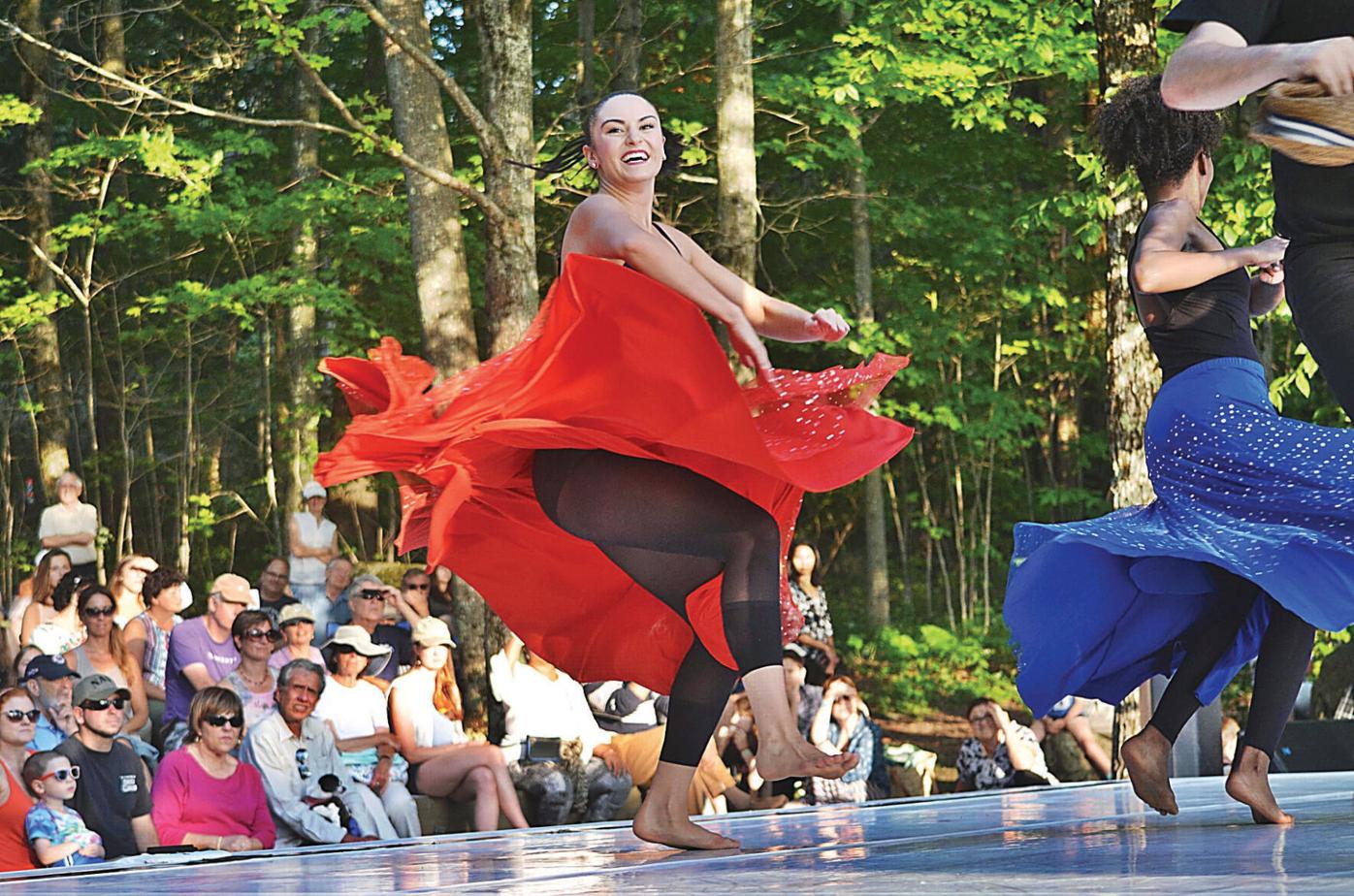 Madison Embrey performs during an Inside/Out free performance, which is held nightly during the festival on Wednesdays through Saturdays at 6:15 p.m. on the campus of Jacob's Pillow in Becket. 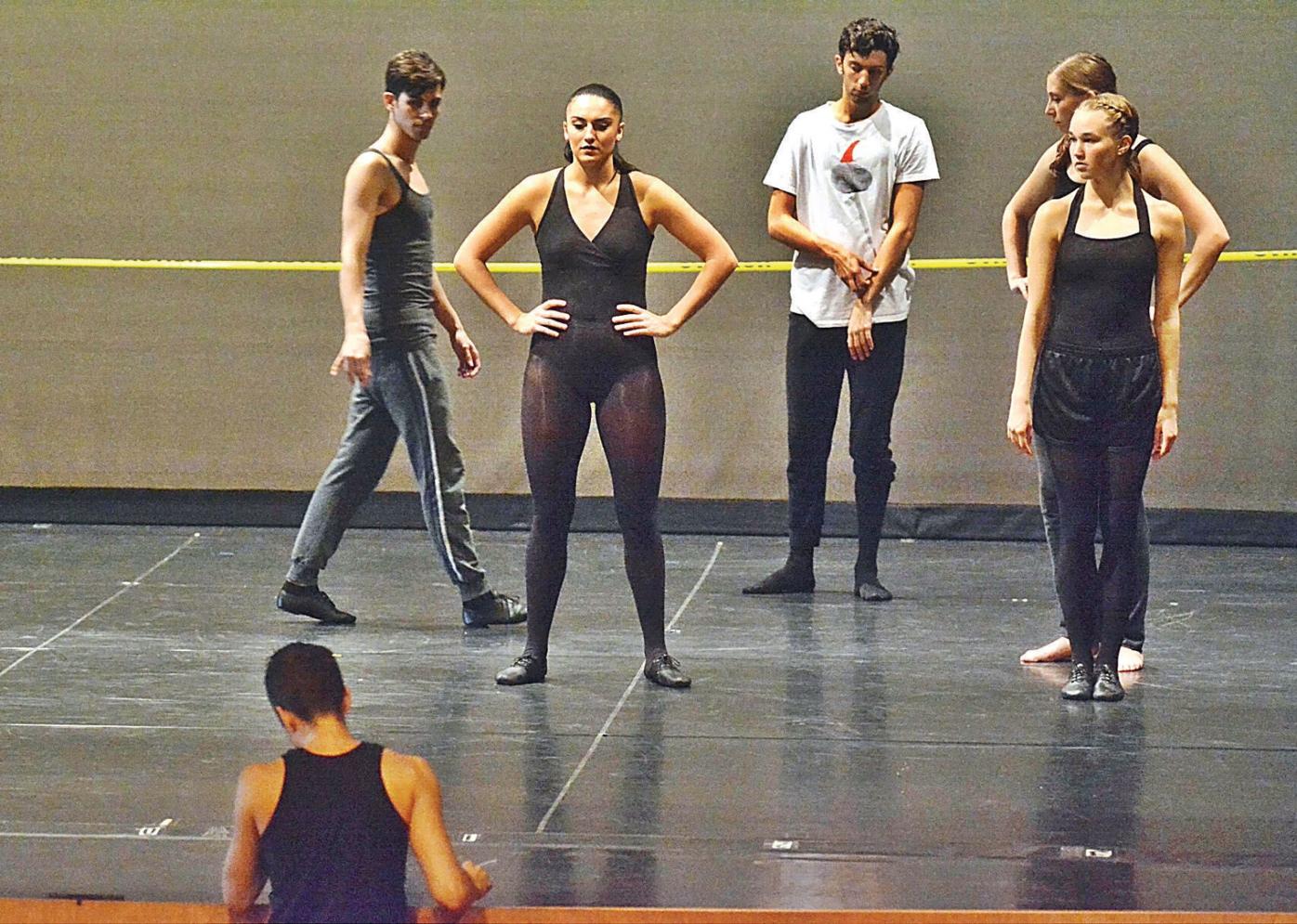 Madison Embrey and other dances get notes during a rehearsal at the Ted Shawn Theater. 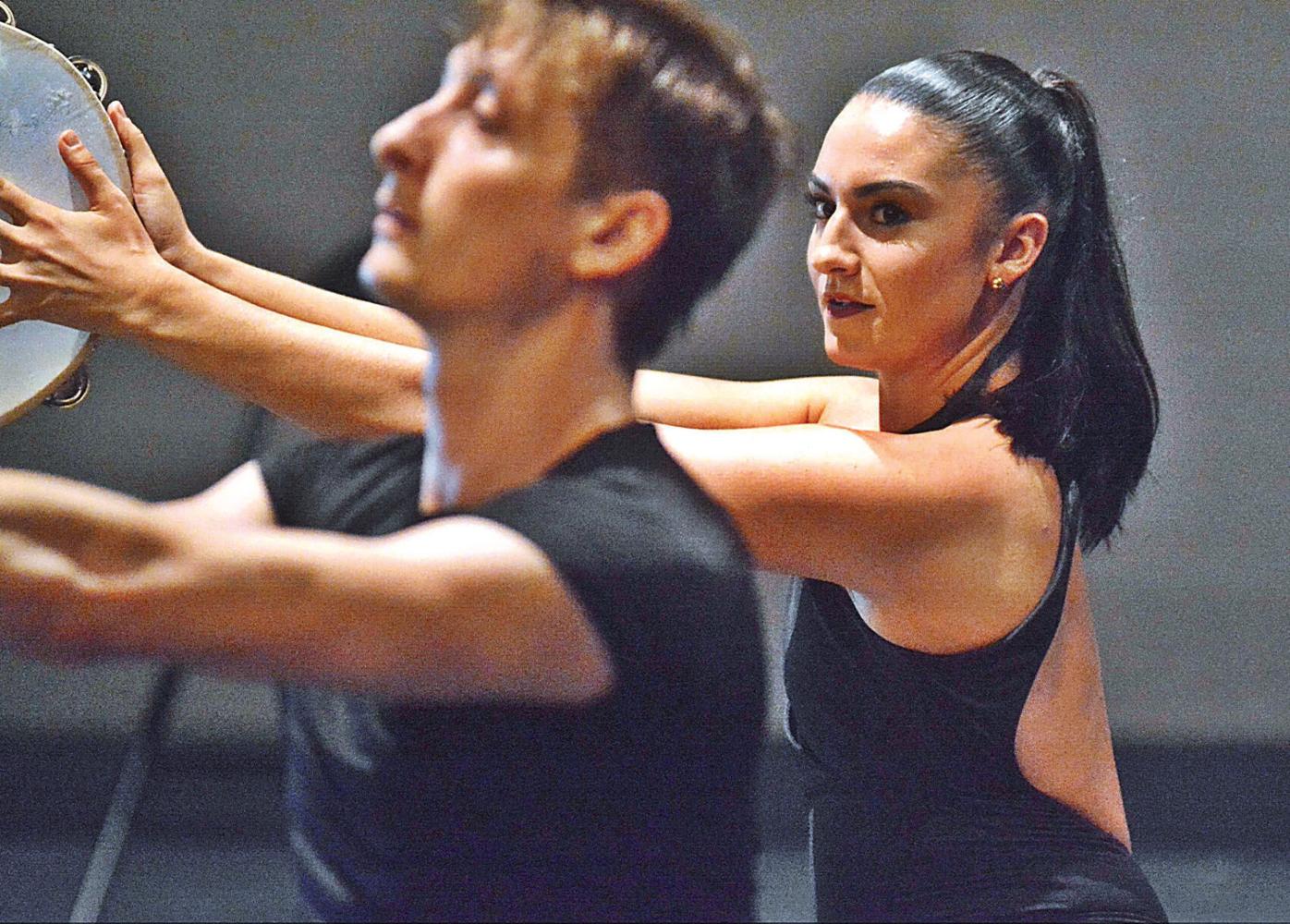 Madison Embrey participates in a rehearsal in the Ted Shawn Theater. 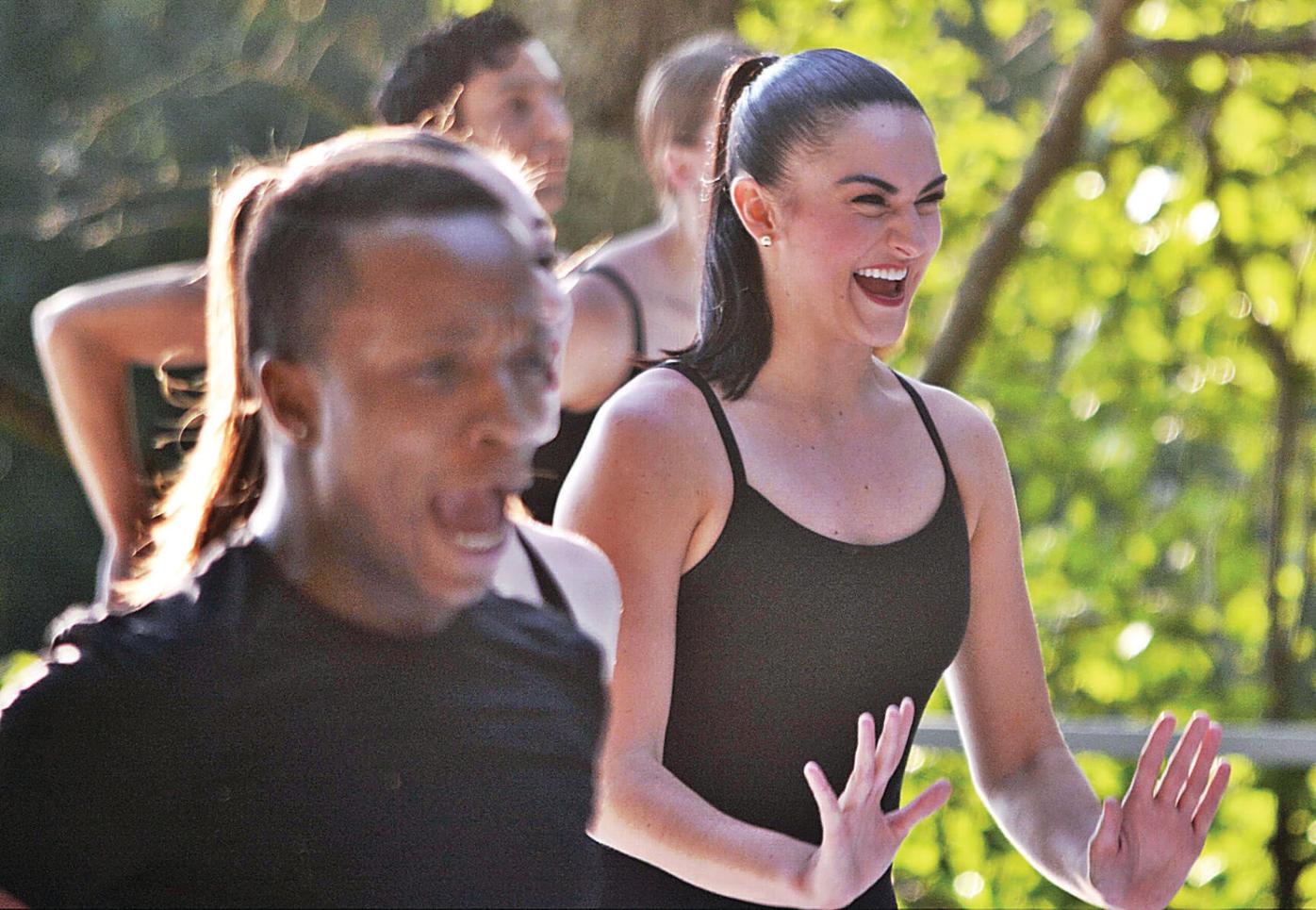 Madison Embrey rehearses for an Inside/Out free performance, which is held nightly during the festival on Wednesdays through Saturdays at 6:15 p.m. on the campus of Jacob's Pillow in Becket.

Madison Embrey performs during an Inside/Out free performance, which is held nightly during the festival on Wednesdays through Saturdays at 6:15 p.m. on the campus of Jacob's Pillow in Becket.

Madison Embrey and other dances get notes during a rehearsal at the Ted Shawn Theater.

Madison Embrey participates in a rehearsal in the Ted Shawn Theater.

Madison Embrey rehearses for an Inside/Out free performance, which is held nightly during the festival on Wednesdays through Saturdays at 6:15 p.m. on the campus of Jacob's Pillow in Becket.

BECKET — Madison Embrey isn't a "dance mom," but some of her fellow dancers in The School at Jacob's Pillow's Musical Theatre Dance program call her their mom.

While the 25-year-old from Lake Angelus, Mich., doesn't know how or why she earned the maternal moniker, anyone spending time with Embrey last Saturday could take a guess. At the beginning of that morning's rehearsal, for example, a dancer couldn't find the tambourines. He queried Chet Walker, the program's director.

Or, when the group was heading down to the Inside/Out Stage for that night's presentation rehearsal, Embrey remembered to bring thank-you cards for staff members, ensuring that others signed while they waited in the below-stage dressing area.

Or, when Norwegian dancer Evelyn Finne expressed some anxiety before the night's Inside/Out event, Embrey offered the 23-year-old some encouraging words and a hug next to the soda machine in the Stone Dining Room.

Embrey's compassion and diligence rarely, if ever, wavered during the Musical Theatre students' final full day, which lasted more than 15 hours. The program was one of four professional advancement courses (ballet, tap and contemporary were the others) offered by the dance center this summer. For three weeks, Embrey and 23 other dancers from around the world endured a grueling schedule that included master classes, rehearsals and weekly Saturday night presentations of their work at the Inside/Out Stage. After some initial struggles that concerned Walker, the dancers' improvement impressed the program's accomplished staff.

"You kicked into a gear we understood," Walker told the students, who ranged in age from 17 to 29 and hailed from eight countries, before handing out diplomas on a recent Saturday night in The Ben & Estelle Sommers Studio.

With more than five hours of rehearsals and a presentation scheduled for that evening, Saturday would require an extra gear.

Embrey awoke at 6:15 a.m. in a cabin located a short path away from the Inside/Out Stage. Following a warmup at Sommers, the students' unofficial home, and some scrambled eggs and coffee in the Stone Dining Room, Embrey prepared for the group's three-hour "A Jazz Happening" rehearsal that was beginning at 9 in Ted Shawn Theatre. The next night's benefit event would run through essentially all of the students' work during the program. Jack Cole was the focus of this year's curriculum, with students exploring each of his three major influences — Lindy hop, Afro-Cuban and East Indian — during the program, led by dance and music experts such as Michael Jagger, Preeti Vasudevan, Douglas J. Cohen and John Fischer. Each day began at 9 a.m. and often included a strenuous 90-to-105-minute warmup for which Cole was renowned, though his often lasted two hours, according to Walker.

The choreographer's affinity for Cole is one of the reasons Embrey applied for the program. Growing up in Michigan, Embrey danced for up to six hours per night, five days per week between the ages of nine and 18. One of her teachers, Rhonda Miller, eventually became the director of the commercial dance BFA program at Pace University in New York City. With some persuasion, Embrey followed her there, helping Miller build interest in the program. After graduating, Embrey traveled the U.S. and Europe with Marvel Universe Live!, an action stunt show featuring comic book heroes and villains, for a few years. When her contract ended in February, she returned to New York City, searching for an opportunity to fulfill her love for performance-based dance. In the spring, she began taking Walker's Cole workshops in New York City and inquired about the Jacob's Pillow summer course.

"I think this is it," she recalled thinking.

Unlike some other Musical Theatre applicants, Embrey didn't have to audition for a spot in person because of her experience at Walker's workshops.

Embrey eventually received a call indicating that she had been accepted to the program and had merited a scholarship. "I hardcore burst into tears," she recalled.

Since then, she has thrived, earning this year's Lorna Strassler Award for Student Excellence, which is given each summer to one exemplary student from any of The School's four programs.

During the morning rehearsal, she was often center stage, expertly maneuvering her sinewy, long-limbed frame through traffic and air alike. For three hours, dancers hinged, suspended, leapt, tapped, kicked, slid, split and skipped with minimal interruption as they practiced various Cole-choreographed numbers, such as "Heat Wave." While the dancers' techniques had been honed for three weeks, their stage behavior still needed work. Watching from a perch toward the middle of the empty stands, Walker was peeved at one point that he could hear students talking backstage, a persistent problem for the bunch.

"You all are horrible at that," he said.

Kyle Pleasant, Walker's assistant, took notes throughout the first part of the rehearsal before individually addressing them. Most of his feedback focused on positioning, referring to numbers at the front of the stage; a zero marks the center of the stage, with ones flanking it and the numbers increasing as they extend stage right or left. Misalignment with one's mark is unacceptable.

"Can you guys go four five?" Pleasant asked Embrey and a partner one time, his order disguised as a question.

Soon, the dancers were enjoying robust lunches at two crowded tables outside Stone. A prolonged topic of conversation was Kathleen Laituri, a 21-year-old from Howell, Mich., who had learned the previous day that she would be a Rockette. Embrey later showed this reporter a video of the students mobbing Laituri after she had received the news. Embrey had recruited Laituri to Pace University, her alma mater.

"She was just the nicest person I've ever met," Laituri said of Embrey as she waited below the Inside/Out Stage before the afternoon rehearsal began.

At around 1:30 p.m., dancers climbed up the stairs leading to the platform and almost immediately began a selfie session, taking advantage of the bucolic Berkshires backdrop.

"You have a whole lifetime to get pictures," yelled an impatient Walker.

The dancers subsequently began rehearsing many of the numbers they had tried earlier in the day. Positioning was an even greater struggle than the previous session.

"Numbers aren't different from this morning," an incredulous Pleasant said, referring to the stage markings.

After two-and-a-half hours, the rehearsal concluded with vocalists practicing on a microphone. Idle dancers collapsed on the platform, fatigue finally plaguing them after more than five hours of near constant motion.

Embrey had planned on napping before the night's performance, but her body was sore. Physical therapy was in order.

"I just need to roll out," she said, cradling a black foam roller.

Still, one more assignment prevented her from retreating to her cabin. Her mother, Jennifer, had just arrived, traveling from Michigan via New York with a friend, and Embrey wanted to give them a tour. She showed them Sommers and the Perles Family Studio, which had opened the previous night and will be The School's home next summer, according to Director of Education J.R. Glover, before taking them to Stone, where Laituri and the other dancers had congregated for a quick energy boost.

"I love your daughter," Laituri told the elder Embrey.

"I'm so happy for you!" she responded, aware of Laituri's big news.

About an hour later, Embrey would be on stage, dancing in the third and final Inside/Out presentation of works-in-progress for The School. Though careful not to treat this event as a performance, the students had drawn a large crowd, with many spectators using nearby rocks and trees for support. For the most part, the dances went smoothly.

"That just felt like a really awesome culmination of what we've been doing," Embrey said afterward.

Before arriving in Becket, Embrey had been teaching and judging dancers, and she would be returning to Michigan to choreograph dances in the program's immediate aftermath. Auditions for shows in New York City would follow. Her time at Jacob's Pillow was a welcome reprieve from the responsibilities of being a professional dancer.

"I was so excited to just be a student," she said.