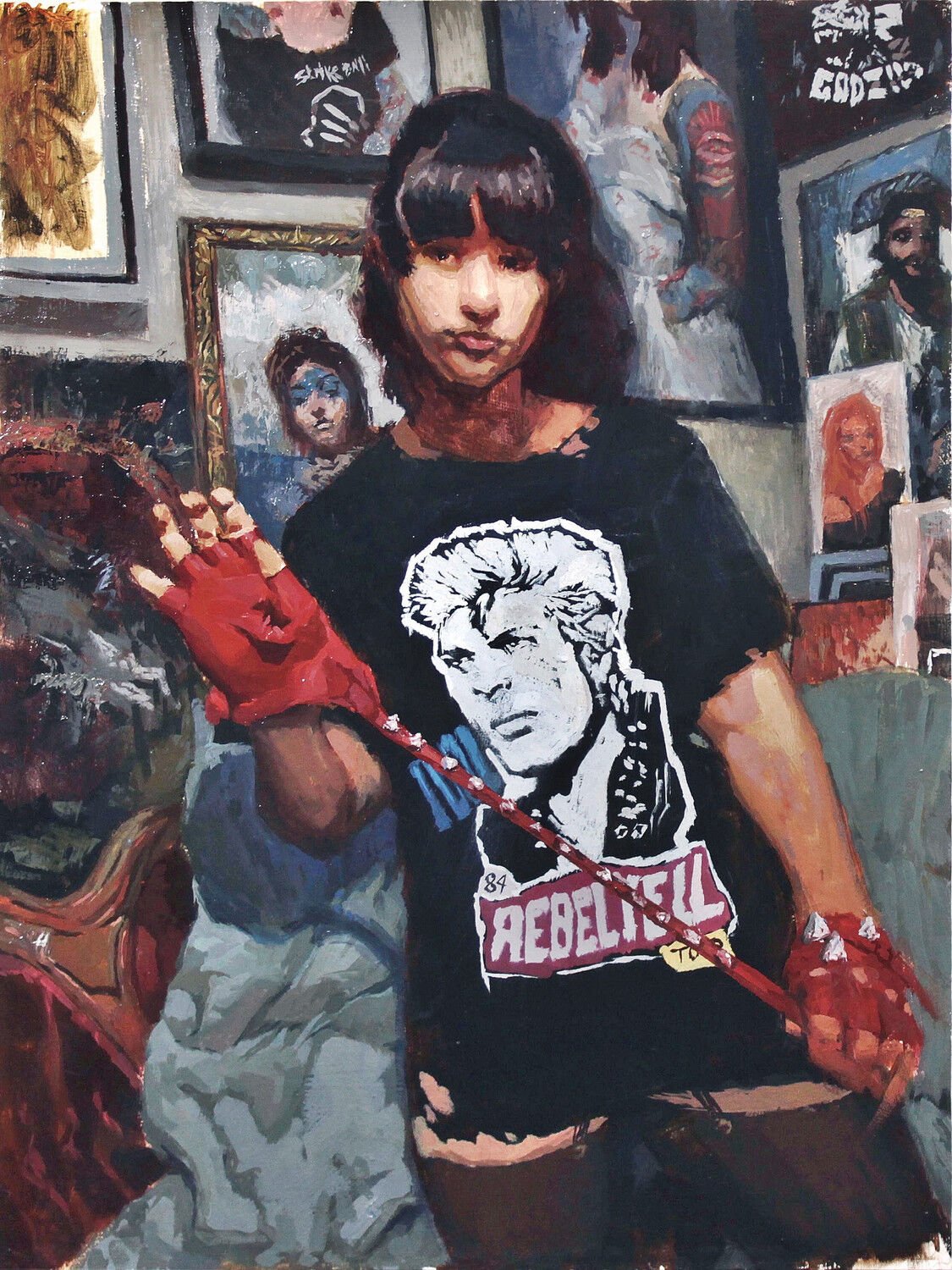 DiNicola will exhibit a series of portraits with the subjects wearing band shirts from the 1980s. 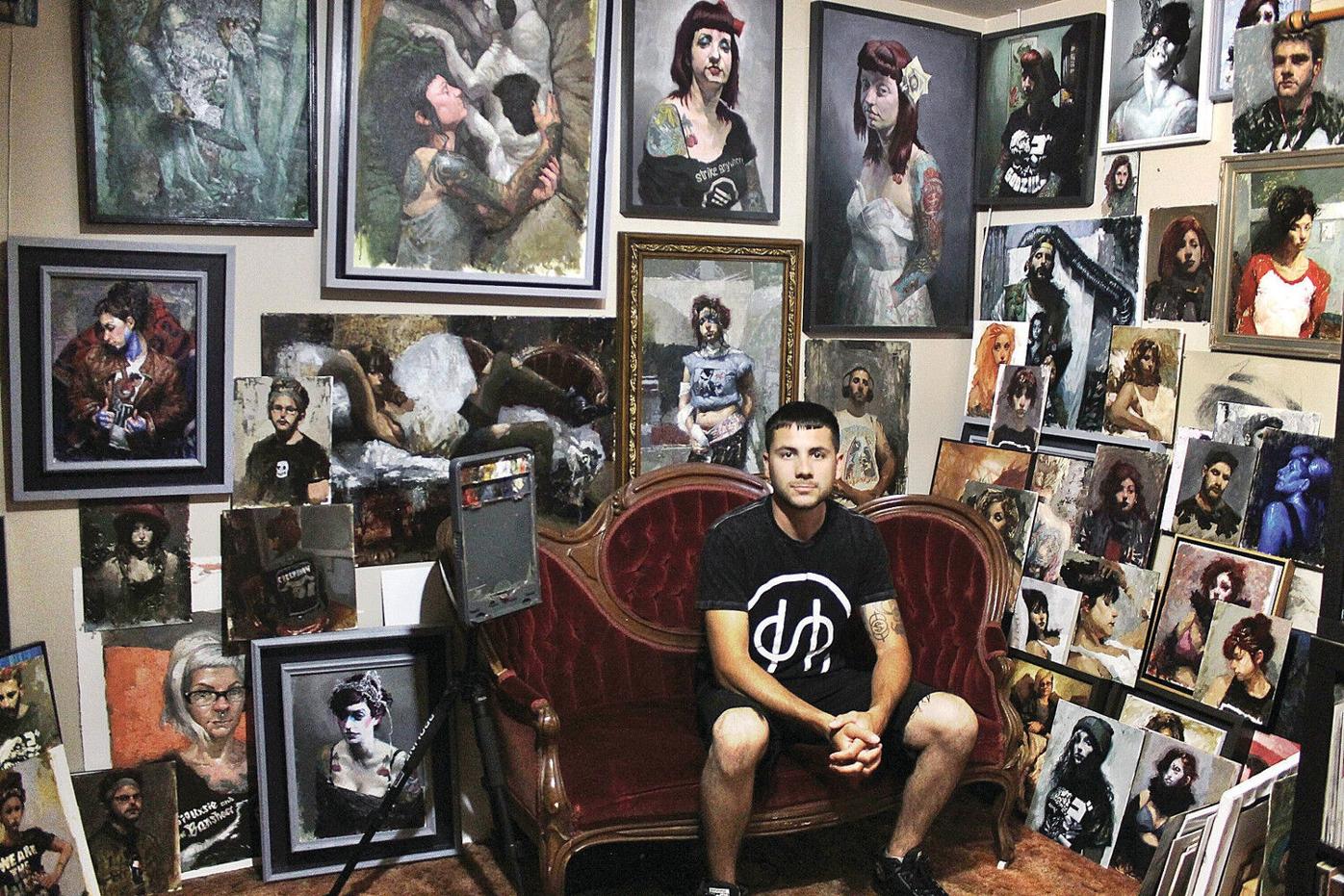 Brian DiNicola, pictured here in his Dalton studio, will be showing his work at The Gallery at The Stationery Factory. 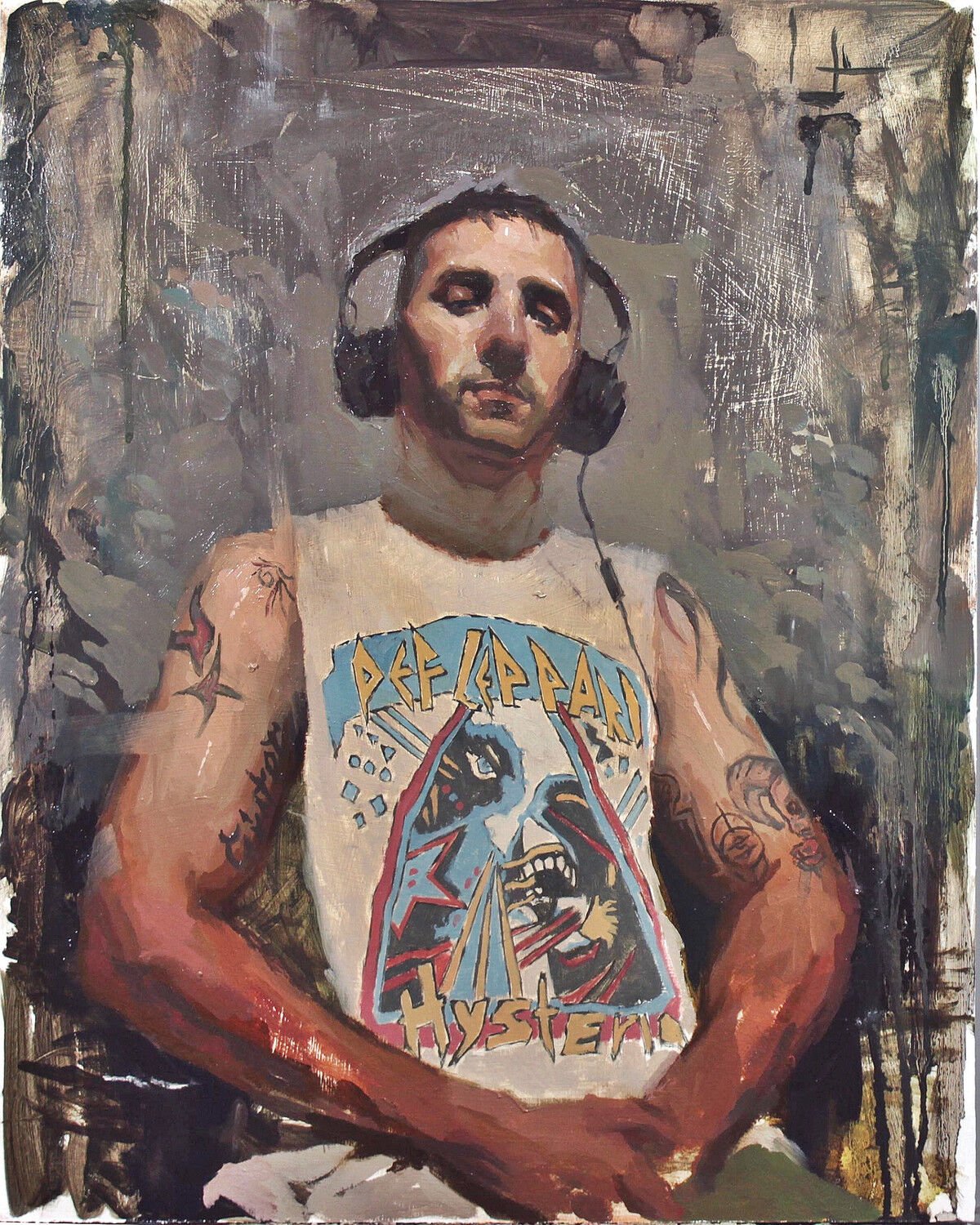 DiNicola will exhibit a series of portraits with the subjects wearing band shirts from the 1980s.

Brian DiNicola, pictured here in his Dalton studio, will be showing his work at The Gallery at The Stationery Factory.

DALTON — Raised in Dalton, Brian DiNicola is Berkshire grown. But his paintings, which have been displayed in galleries from San Diego to Boston, haven't made their way into the county's art scene.

"In a way, I feel like I'm foreign to the art scene here," DiNicola said in his studio on Wednesday night, three days before his 29th birthday.

DiNicola's efforts to change that began when he displayed portraits at the Saint Francis Gallery in Lee last year, and now he'll be one of six artists with Berkshire roots whose work will be highlighted in a new exhibit at The Stationery Factory. Titled "Berkshire Grown Artists," the show that opens Friday and Saturday nights will feature pieces by Alexander Bastow, DiNicola, Sarah Fortini, Beth Norton, Helen Roy and Rosemary Roy in The Gallery at the Dalton venue. DiNicola appreciates the exposure for both the artists and the building.

"We could not only springboard, say, Alex's work and the other people's work, but I think for the gallery itself, for Stationery ... looking at it, that place is almost in its infancy with what it can be," the Dalton resident said.

Since buying The Stationery Factory in 2013, co-owner Steven Sears has spearheaded hosting community events and housing various artistic ventures at the venue. He's hoping exhibits like "Berkshire Grown" can not only engage Dalton residents but also draw people from the rest of the Berkshires, creating a sought-after "outlet for the expression of art," he said by phone.

DiNicola's work in The Gallery will primarily be portraits from the last year or so. Lately, he has been depicting figures who wear garb paying homage to music from the 1980s.

"That's the first stuff I ever listened to, so I've been feverishly looking through eBay for the old '80s tour raglans," he said.

Gallery-goers can expect to see, among others, Billy Idol, Def Leppard and Billy Squier represented in the apparel. DiNicola often has his fiancee, Amber Gamello, pose in the shirts for him.

"She can bear with me while I take way too long to take reference photos and stuff," he said.

Portraits have been DiNicola's specialty since graduating from the University of Massachusetts-Dartmouth with a Master of Fine Arts in painting and a Bachelor of Fine Arts in illustration. He has had work shown at more than 35 venues since 2013, including the Guild of Boston Artists gallery on Boston's Newbury Street and the Dacia Gallery in New York City.

Much of his most recent work, however, resides in a small room in the basement of his parents' Dalton home. DiNicola returned home after college to live with his parents, Geno and Kathleen, but he eventually moved out after saving enough money. (He currently works at Boino Masonry.) When his parents offered him a studio space rent-free, though, he couldn't resist.

"They just let me inhabit it and fill it with an art fungus. Plus my mom gets to see me occasionally, which she likes," he said.

DiNicola wasn't immune to spending time at home during his youth.

"I wasn't that much of a social butterfly," he said. "I had a few friends, but Friday nights [were] always 'Dragon Ball Z' and 'Lord of the Rings,' and I would draw and paint for like eight or nine hours. It was like my own little special bubble."

In 2007, DiNicola graduated from Wahconah Regional High School with some art classes under his belt. By the time he arrived at college, he knew he wanted to pursue a career in the creative realm. Choosing to study illustration as an undergraduate was an error, he said.

"Illustration was very flat. It wasn't material-based. It was all whatever we could reproduce," he said.

DiNicola has an aggressive painting style that isn't conducive to canvas. He prefers wood. Californian artists, such as Sean Cheetham, heavily influence his palette.

"He was like the first person I looked at in grad school, and I still look at his work all the time," DiNicola said.

"It brings out the mood of a scene," Bastow said of his work.

The rest of the artists will share acrylics. It will be a family affair. Norton, Helen Roy and Rosemary Roy are sisters who grew up in Dalton. Housatonic-based Norton will display paintings on black canvas that represent a departure from her watercolors. Helen Roy, who currently resides in New York City and Westerly, R.I., will present pieces on wood and metal, portraying lines, geometric shapes and abstracts sunsets. Rosemary Roy, now living in Northampton, will show acrylics on wood and canvas that draw from nature. And Fortini, who is Norton's daughter and calls Brooklyn home, will exhibit portraits of women.

DiNicola will be doing some live painting at the opening events next weekend. He was thrilled with how many questions he fielded when he did something similar at the Saint Francis Gallery.

"People, instead of being apprehensive to talk to you, they immediately come up and talk to you," he said.

The artist recently attended Berkshire Money Management's "New Art in an Old Building" event at the Model Farm in Dalton.

"There [were] a bunch of people there. I was like, I had no idea this many art people existed in this town," he recalled.

He doesn't have a prediction for next weekend's turnout.

"I don't really know the demographic here. If I was going to Boston or something, I could tell you exactly how many people would show up, but here it's kind of, again, it's sort of new for me," he said.

No matter how many people show up to the openings, DiNicola is looking forward to reintroducing himself to the place where he'll always have his roots.

"I'm just super excited to show locally, to paint in front of people," he said, "and actually show Dalton what I've been up to since 2007."