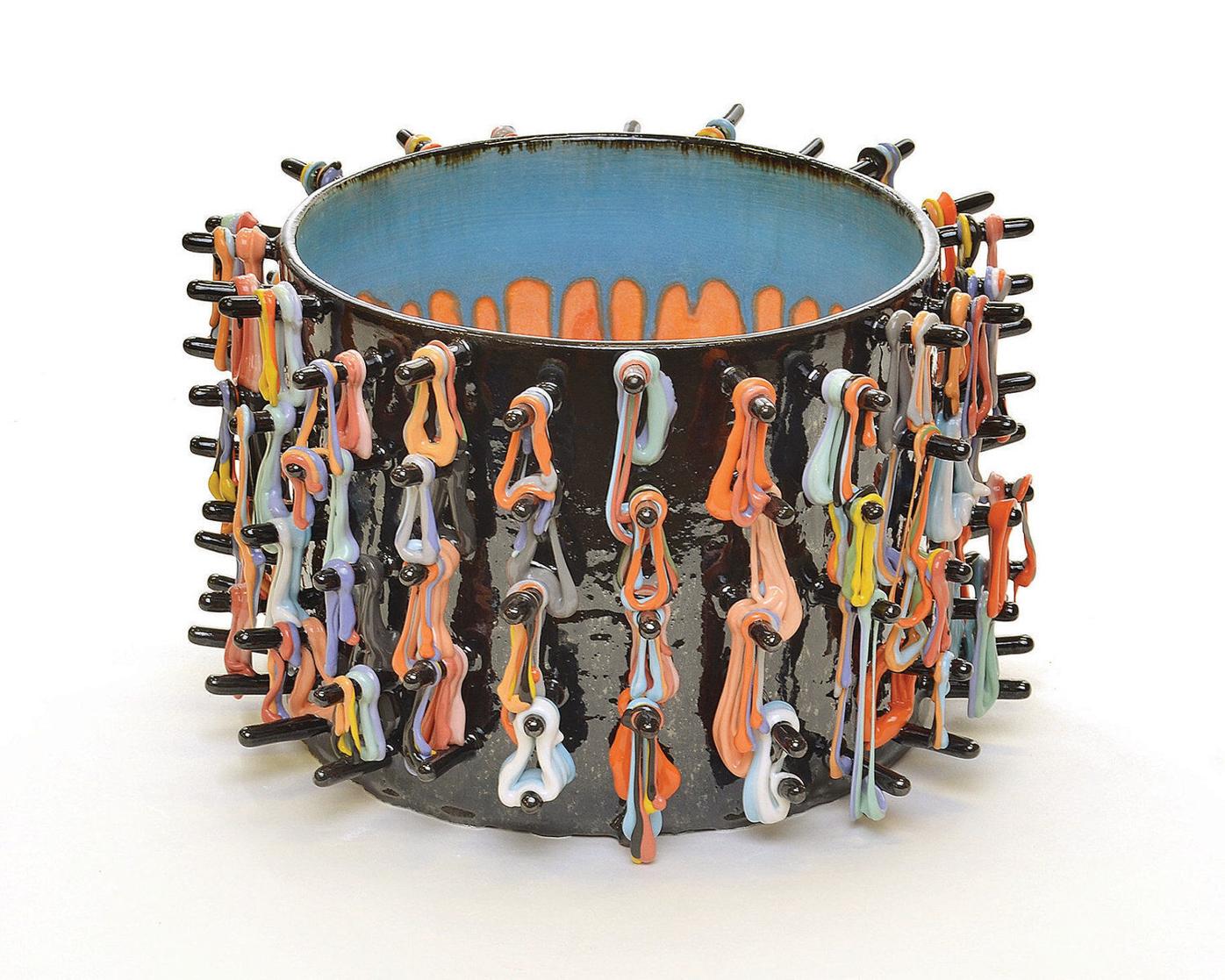 'Black Cylinder Crispy Loops' 2018, red earthenware, glaze. Experimentation is key to Mabry's creative process. She isn't one to sketch before creating a piece, she said. 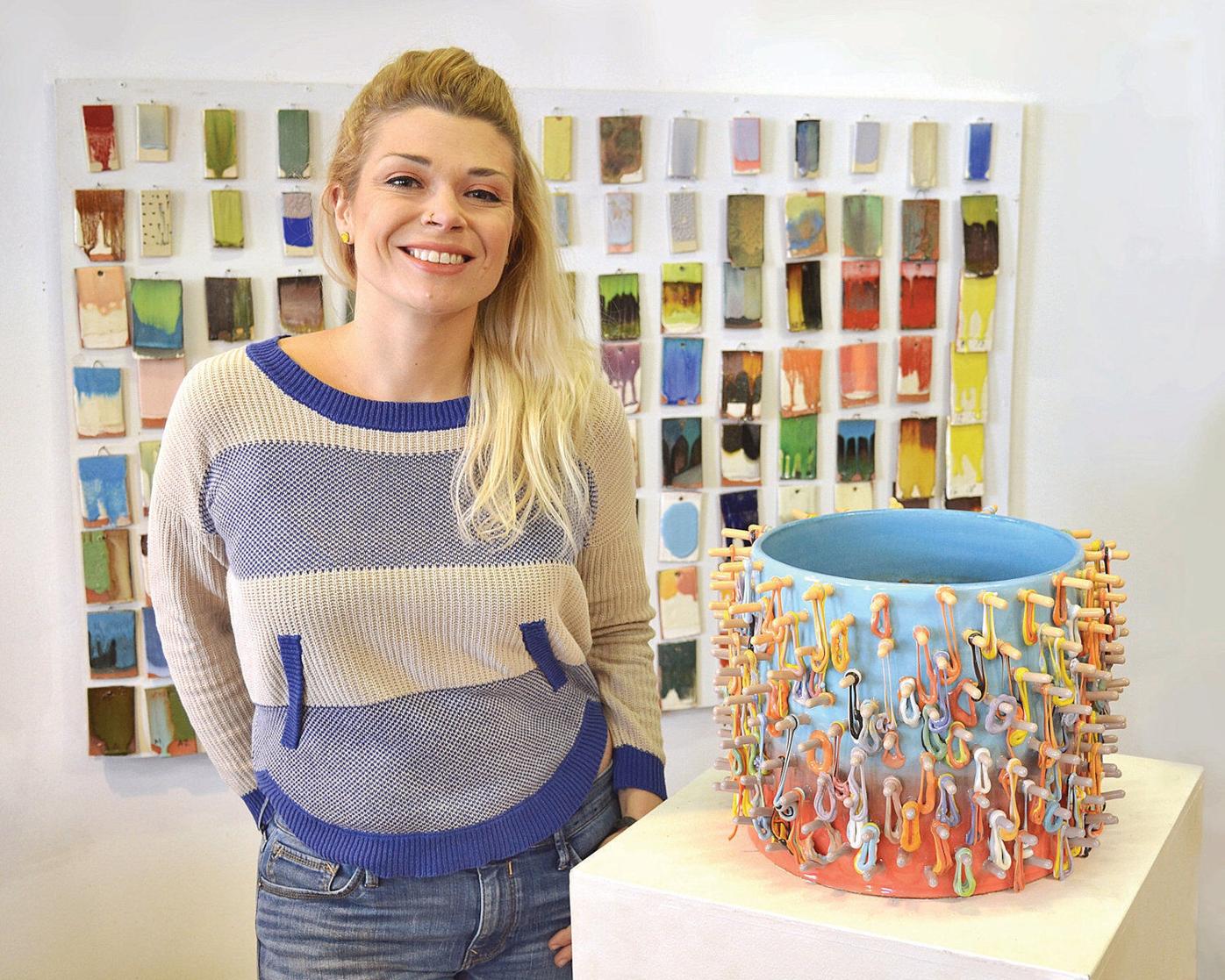 The work of Philadelphia-based artist Lauren Mabry is the focus of "Fused," her first solo exhibit at Ferrin Contemporary in North Adams. The show runs through June 30. 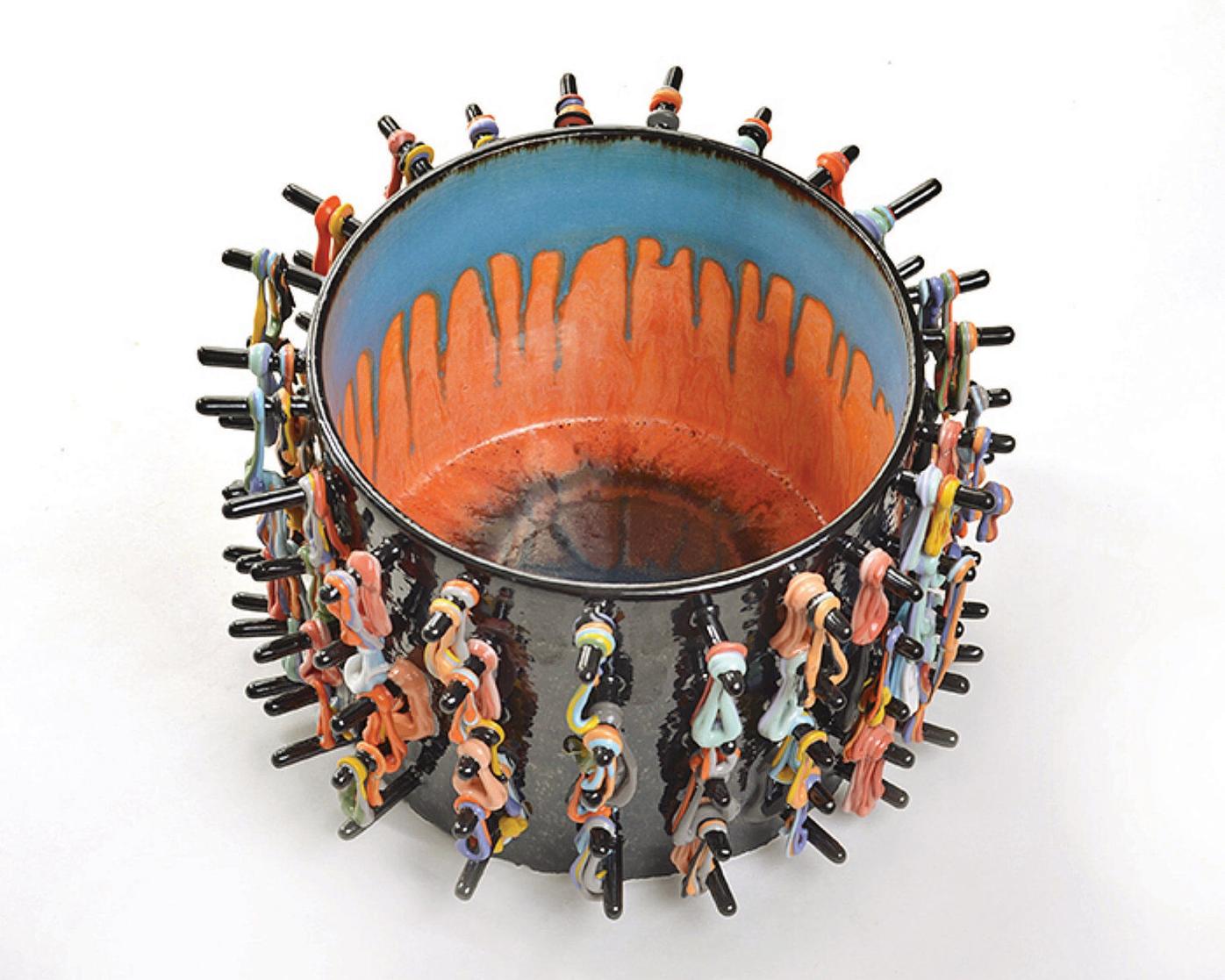 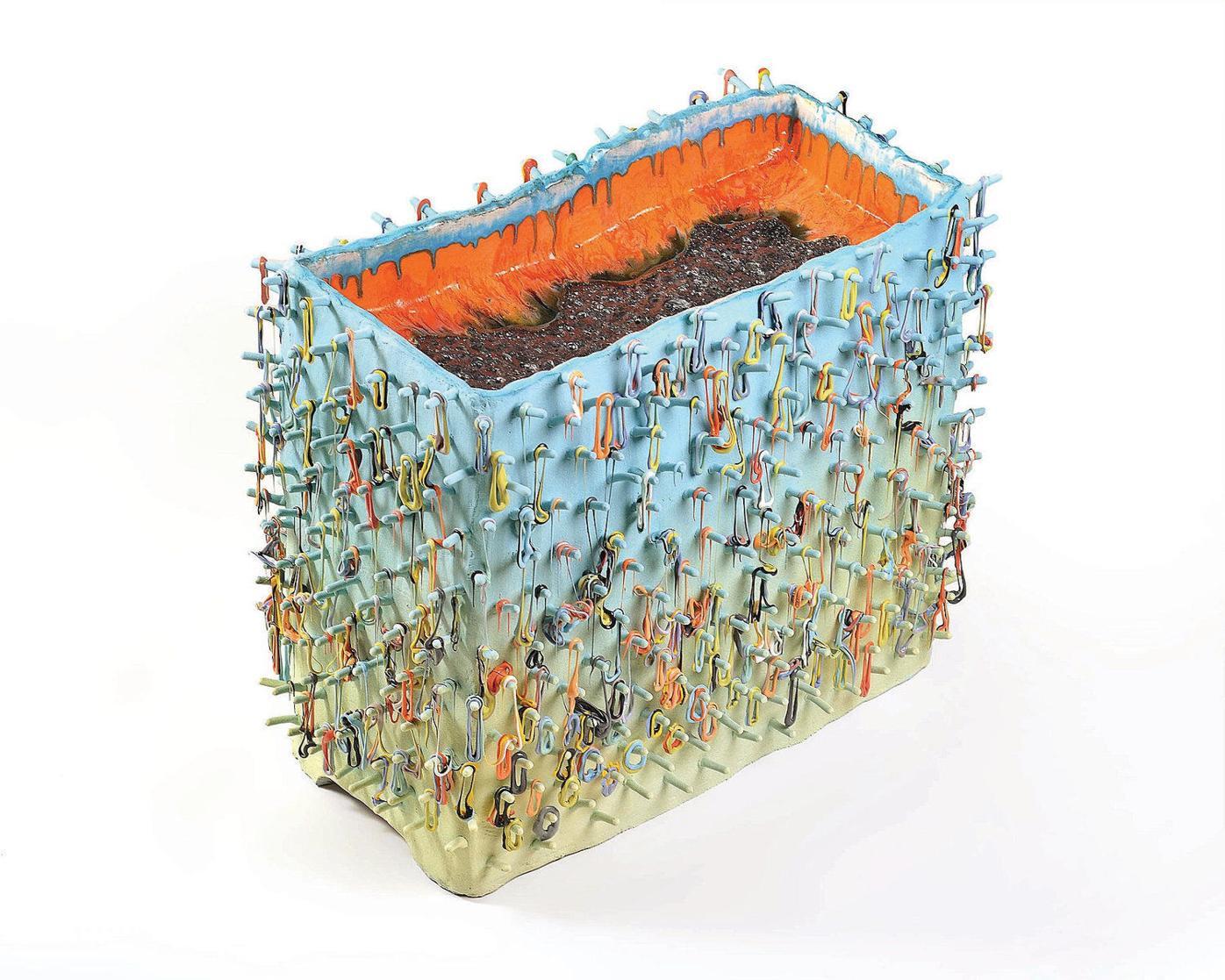 'Loopy Block' 2018, earthenware, slip, glaze. These vessels are a departure from Mabry's earlier work, which was smoother. These are filled with pegs. 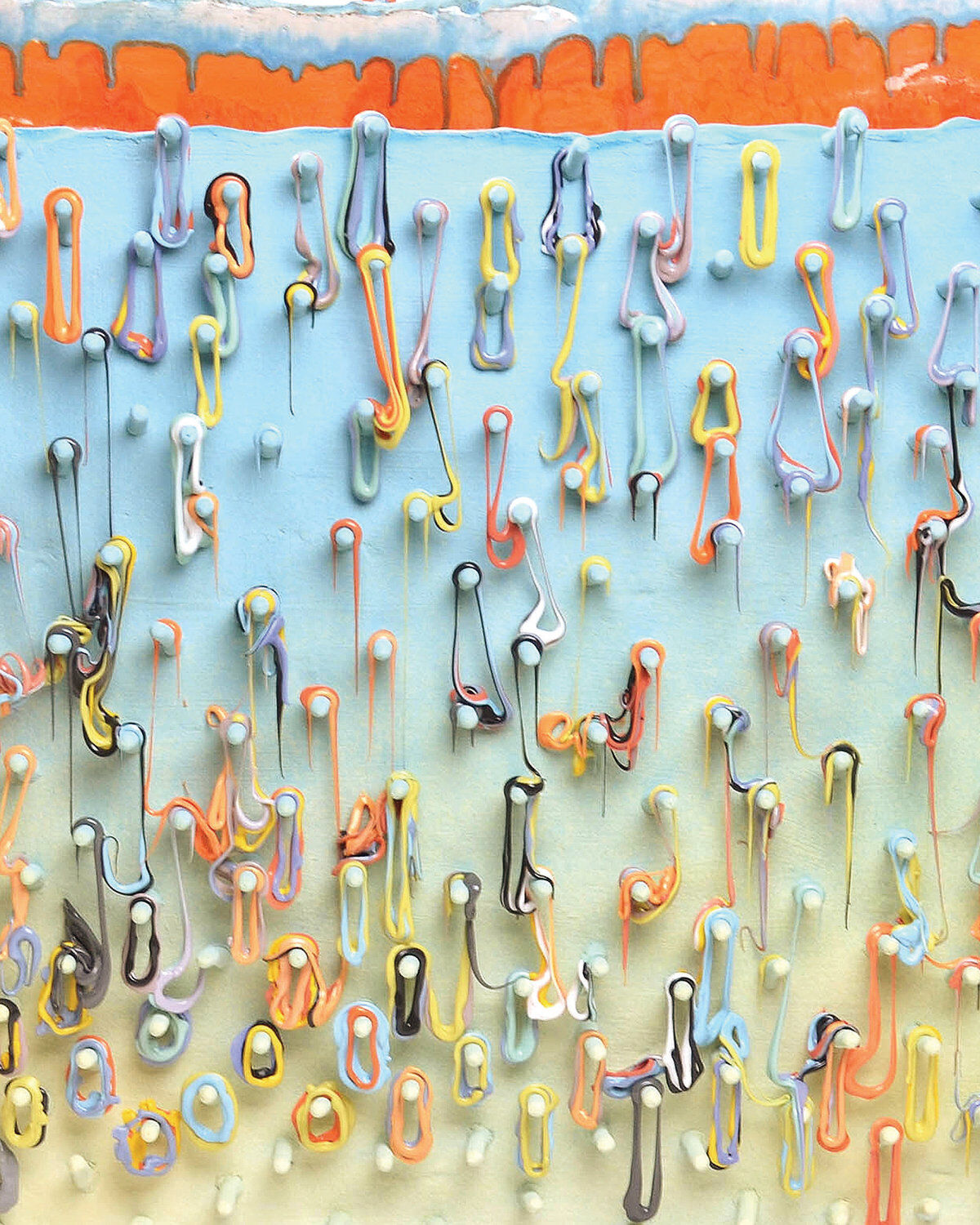 A close up of "Loopy Block."

'Black Cylinder Crispy Loops' 2018, red earthenware, glaze. Experimentation is key to Mabry's creative process. She isn't one to sketch before creating a piece, she said.

The work of Philadelphia-based artist Lauren Mabry is the focus of "Fused," her first solo exhibit at Ferrin Contemporary in North Adams. The show runs through June 30.

'Loopy Block' 2018, earthenware, slip, glaze. These vessels are a departure from Mabry's earlier work, which was smoother. These are filled with pegs.

A close up of "Loopy Block."

While most ceramic artists see glaze as the thing that finishes a piece, Lauren Mabry sees it as the centerpiece of her work.

"Now, I'm searching for new ways to paint and draw. The glaze is becoming the form."

On Monday, the Philadelphia-based ceramic artist had just proctored her last final of the semester at the Tyler School of Art and was starting to prepare for a trip up to Ferrin Contemporary in North Adams to mount "Fused," her first solo show at the gallery, when she spared a half-hour to speak to The Eagle.

Back then, her work was focused on the surface of her earthenware vessels, where she created abstract paintings from drips, brushstrokes and splashes of brightly hued glazes.

"The following summer, in 2015, I was part of the 'Glazed and Diffused' show, with Raymon Elozua, Peter Pincus ... and a few others. I came up to the gallery and to [Project Art in] Cummington for the first time that summer," she said. "I really felt like I was hanging out. There's a real homey environment in Cummington."

At that point, her work had begun to change; the glazes had begun to spill off of the clay and become more than colors with which she painted.

In October 2015, Lincoln (Neb.) Journal Star arts columnist L. Kent Wolgamott praised her work, specifically, "Spilled Pipe," part of a solo exhibition, "Upcoming" at Lux Center for the Arts in Lincoln, Neb. The piece, which appears to be a good size piece of pipe with orange, red and yellow liquid running out of it, is made from terracotta clay. The colors that pool just outside of the ceramic pipe are actually glazes crafted to look like running liquid.

"That's a true technical achievement and a perfect illustration of Mabry's work that brings abstraction to ceramics via a tenuous combination of precise, technically masterful construction and glazing, and relinquishing that control," he wrote.

In his critique, Wolgamott referred to her work as "classic abstract expressionism given three-dimensional form" and called Mabry a "rising star in the ceramics world."

He wasn't wrong. By late 2015, Mabry, who earned her master's in fine arts from the University of Nebraska-Lincoln in 2012, had received an emerging artist award from the National Council on Education for Ceramic Arts (in 2014) and just a few months prior was named a 2015 Pew Center for Arts and Heritage Fellow.

In 2016, she began pushing her creative process to new places, all while teaching courses at Tyler and planning a wedding (which is happening May 25).

During this time she was communicating with Ferrin about a show at the North Adams gallery. For Ferrin, one of her roles when working with artists, she said, is to set a deadline or endpoint for the creative process in anticipation of presenting the finished product in a cohesive show.

"The role, I think I get most excited about, is seeing new work emerge through deadline. The deadline for Lauren, we started talking about it last fall," Ferrin said " I knew she was doing this new work and so, it was about shaping the exhibition."

Over the course of a year, Mabry sent a series of images of her work to Ferrin, who began crafting them into a visual narrative.

"For her, it was more about technique and the successes of these experiments," Ferrin said. "[She'd ask] 'How many of these do we show?' And I'm like, 'Don't worry about it until April, when you see the work and pick the best pieces. These other ones, you and I will know about. We're going to focus on the best work that comes out of this period of time.'"

The last two years of experimentation, she said, allowed Mabry to find "new fusion points between clay and glaze."

Experimentation is key to her creative process, Mabry said, noting she isn't one to sketch before creating a piece.

"There's a feeling, but I don't really do any planning," she said. "I get an idea and by the time the idea feels real, I just make it."

And that experimentation has led her newest works in a direction, that, at least at first blush, looks different from what she's produced in the past.

Her vessels are no longer smooth, but filled with pegs that jut out in every direction like colorful porcupine quills. Her brightly colored glazes no longer slide down the sides and pool nearby, they now ooze, drip and twist their way along the pointy paths of pegs.

"It looks like I'm going in a new direction, but I'm not," she said. "I've taken the direction that I've been going in and pushed that even further."

The changes in her work, she said, seem to be a subconscious manifestation from her childhood: pegs from Japanese pachinko machine her parents owned; colors that appear to come from the popular "Magic Eye" books, which used two-dimensional patterns to create 3D images.

"My work is completely intuitive. It seems I'm revisiting things with my work, which I'm not conscious of before hand. It seems old ideas are never really finished," Mabry said.