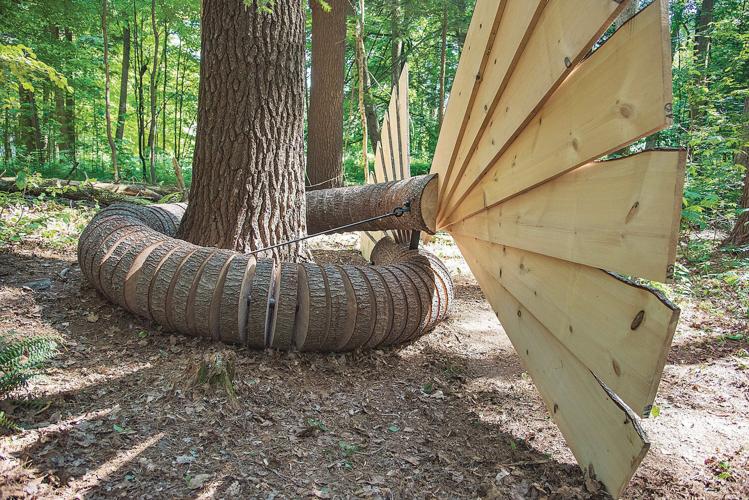 Instead of creating an exhibit that happens to be at Chesterwood, the Browns negotiate with their surroundings. 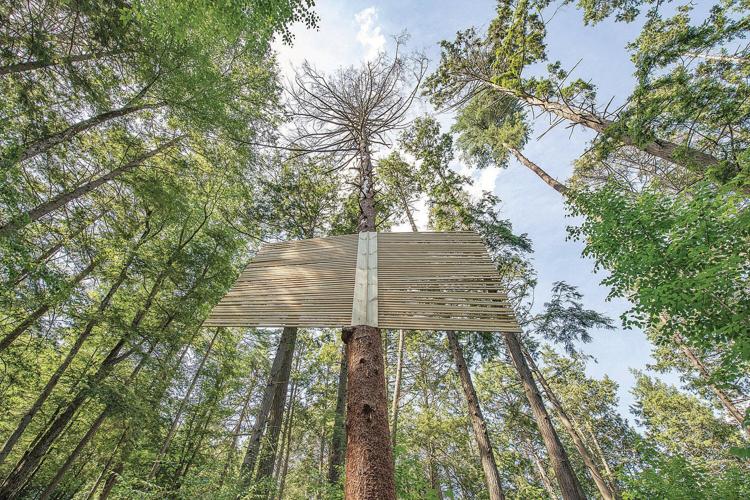 The Browns took inspiration from recent findings that trees communicate with each other underground. 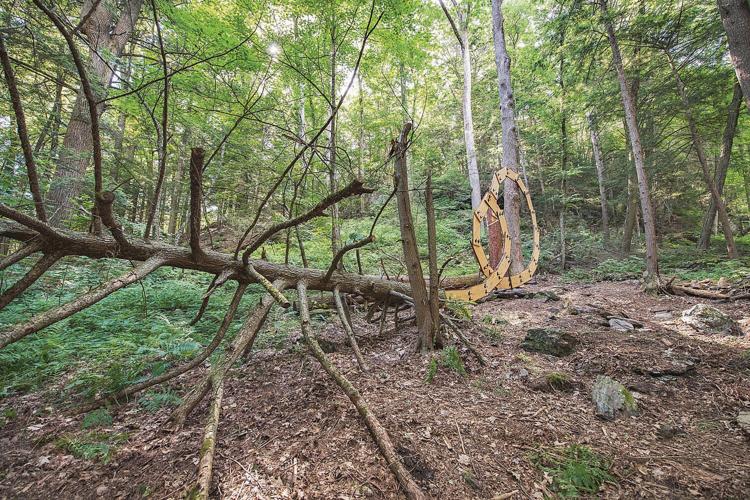 A massive wooden structure coils around a blown-over hemlock in the Brown's piece "Dreaming." 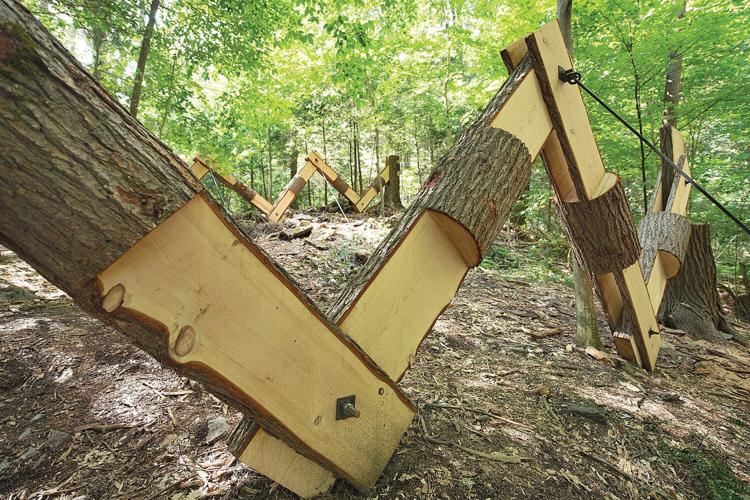 The exhibit features sculptures carved exclusively from fallen, dead or infested trees on the estate of Daniel Chester French. 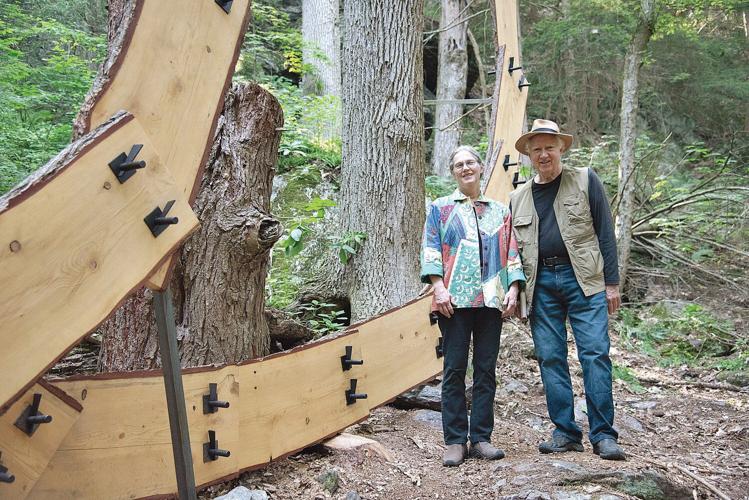 Environmental sculptors Rick and Laura Brown with their exhibit, "One Impulse from a Vernal Wood," now on view at Chesterwood.

Instead of creating an exhibit that happens to be at Chesterwood, the Browns negotiate with their surroundings.

The Browns took inspiration from recent findings that trees communicate with each other underground.

A massive wooden structure coils around a blown-over hemlock in the Brown's piece "Dreaming."

The exhibit features sculptures carved exclusively from fallen, dead or infested trees on the estate of Daniel Chester French.

Environmental sculptors Rick and Laura Brown with their exhibit, "One Impulse from a Vernal Wood," now on view at Chesterwood.

STOCKBRIDGE — With no agenda and no instruction, Chesterwood took a bet on environmental sculptors Rick and Laura Brown. The task? Fill an entire forest with eight tree-sized sculptures in just under a month.

"For them to put a whole show in our hands, without it actually existing and with one month to pull it all together, was pretty courageous and risky for everybody involved," Laura said. "And so I respect Chesterwood. That's what kept us going in a lot of ways."

The couple's contemporary art exhibit, "One Impulse from a Vernal Wood" features a series of sculptures carved exclusively from fallen, dead or infested trees on the estate of Daniel Chester French, sculptor of the Lincoln Memorial in Washington D.C.

The Browns, who are well-known for spending a decade reconstructing the Nazi-destroyed Gwo dziec synagogue in Poland, root this project in recent findings that trees communicate with each other underground. These sculptures serve as an above-the-soil visualization of this phenomenon, with installations ranging from cryptic symbols nailed onto a withering tree ("Wisdom") to an explosion of planks suspended 30 feet above the ground ("Singing Tree") to a massive wooden structure coiling around a blown-over hemlock ("Dreaming").

"There is a huge relationship going on underground that we are totally unaware of," Laura said. "It's subtle, it's dynamic, it's incredibly alive. We were trying to create metaphors with what we feel is going on."

With a torrent of rain in June, the couple faced miserable conditions while hammering and sawing away on a deadline. Yet, for them, it's only part of the "creative spiral" in building the exhibit.

"We've had such horrible weather," Rick said. "It's really just beating us back, but again, the thing that's beating us back is what we are really endeared to: It's nature. We're working with nature, but it's not always simple and that's what makes every moment dynamic. In every show we do, there's a chance we can fail because we haven't done it before and all kinds of things can go wrong. And this is a perfect example."

For relatively simple sculptures composed of wood and steel, the work is brutal. The Browns work seven days a week, morning to night, rain or shine.

Typically, the couple will take the material back to their studio in Boston, but at Chesterwood, the studio is brought to them. A local sawyer mills and cuts the wood deep in the forest for the Browns to sand, plunge and reshape to their liking. Despite the scale of their work, the two pay attention to the minutiae, making sure each cut is splinter-free and that the bark is preserved on the log.

"We have high standards because you want to get a certain kind of feeling," Rick explained. "People say, 'They look like trees, but they don't look like trees. How is that?' From a distance, they aren't sure. That's what we like to do, having [these works] visually transform across space."

All this work revolves around and adapts to the ancient New England forest. Instead of creating an exhibit that happens to be at Chesterwood, the Browns subscribe to the idea of a site-specific showcase, a complementary creative process where the artists negotiate with their surroundings.

"You're dancing with the forest," Laura described. "You're collaborating and it's a relationship with what you're making and what's there and how to punctuate your dialogue. It's not really intervening but coming into [the forest]."

"We've been doing site-specific work because we grew up in a period when sculpturing changed dramatically in the 1970's," Rick said. "The big switch was getting away from the pedestal and having objects that are not idealized but really more integrated in the space or in this case, born out of the space. And that's the whole idea. The tree blows down and we use that as our inventory. We're not trying to rise above nature, we're trying to work with it."

For Chesterwood's Executive Director Donna Hassler, giving the Brown's a solo exhibit spanning the entire forest was a departure from the site's usual contemporary summer displays. "I want it to be a bit of a surprise," Hassler said. "People ask, 'What's happening at Chesterwood this summer?' And the last few years, I've been hearing from the general public, we'd like to see more sculpture in the woods. Well, the entire show is in the woods this year."

While the Browns have revived forgotten trees into a colossal art exhibit, Chesterwood itself has experienced its own revitalization as a program and historic site.

When Hassler came on in 2008, French's studio and residence was in as much as a $60,000 deficit not only due to the recession but also because of visitation numbers decreasing since the '90s, according to a Berkshire Eagle article published in August of 2008.

With the goal of "raising the visibility and profile of the artist, first and foremost," Hassler commissioned Lincoln scholar Harold Holtzer to write the first biography of Daniel Chester French, "The Monument Man," released in March.

Inside the buildings, visitors can enjoy a recently renovated studio, now also used as a space for educational programs and dance performances.

But outside is Chesterwood's 130 acres of land, which Hassler sees as untapped potential for exposure. The Brown's exhibit is the first step toward Chesterwood's aspiration of elevating itself to become a go-to outdoor sculpture venue, Hassler said, on the same level as the Saint-Gaudens National Historical Park in New Hampshire or the Storm King Art Center in New York.

"We're recognizing the history of this place because Daniel Chester French would put his own work outdoors," she said. "In fact, he had a railroad track here where he would push his work outside and continue to work on them in the light of the day."

As artists-in-residence in June of 2018, the Browns were able to survey the grounds, snap photos and visualize their sculptures in the forest. Most importantly, Rick mentions he began to "understand what Daniel Chester French understood as a sculptor."

"It's a very specific mindset," he said. "There was a certain elegance about [Chesterwood]. But at the same time, [French] farmed this land. He raised cattle here, and he would actually sell the things he farmed. And then he built this garden in the forest, this blend of manicured, controlled environment mixed in a natural [setting]. And so he too was working with nature, so I felt an affinity for what he was doing."

"The Browns are very creative," Hassler said of her decision to invite Rick and Laura. "They see things especially in a very dense forest like Chesterwood. They see possibilities and opportunities where most people wouldn't even consider. So I think people will be very surprised at the inventive and creative ways they have taken fallen trees and reconfigured them."

For now, the Browns are taking a quick breather from their frenzied creative process to admire the finished exhibition, which runs through Oct. 27.

"There's times when you're hurting day after day after day," Laura said of the sculpting process. "The hardest days are the mornings when you don't want to get up. But you do get up because you feel alive. It's like, `Why do people go on the top of Mount Everest?' I wouldn't want to do that. This right here, this is our Mount Everest."