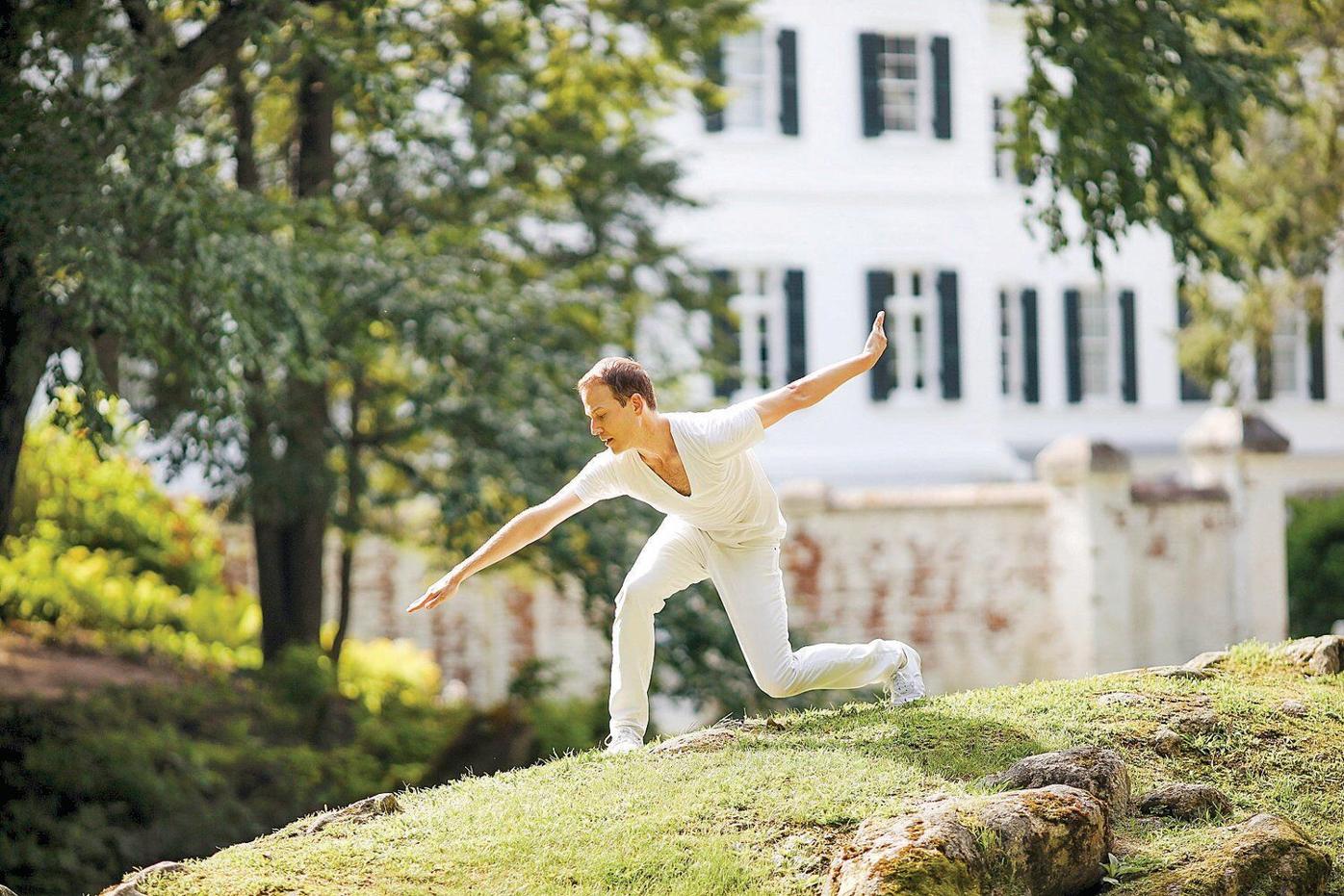 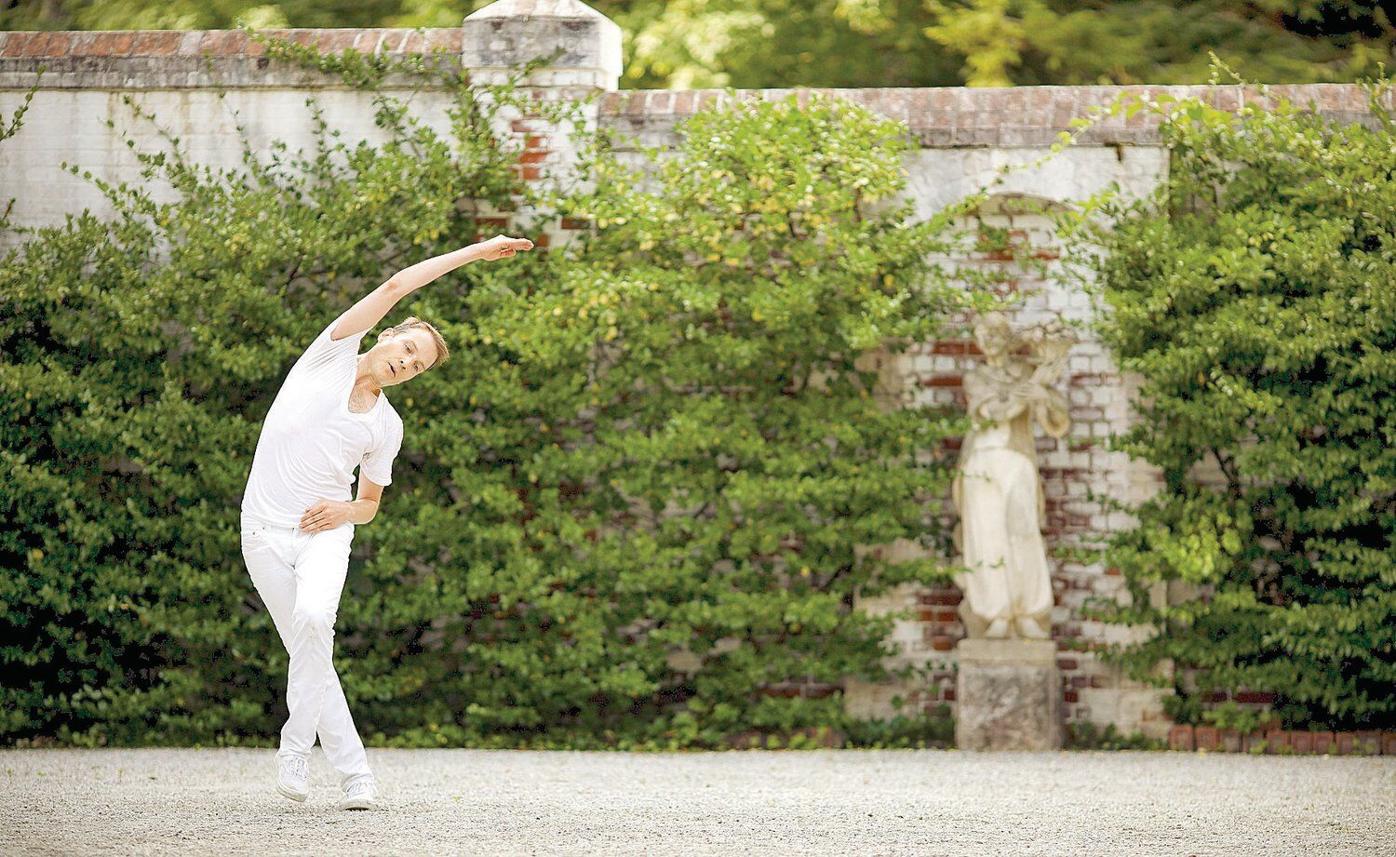 The Mount's Forecourt felt like "an obvious performance space," for Spencer Bell. 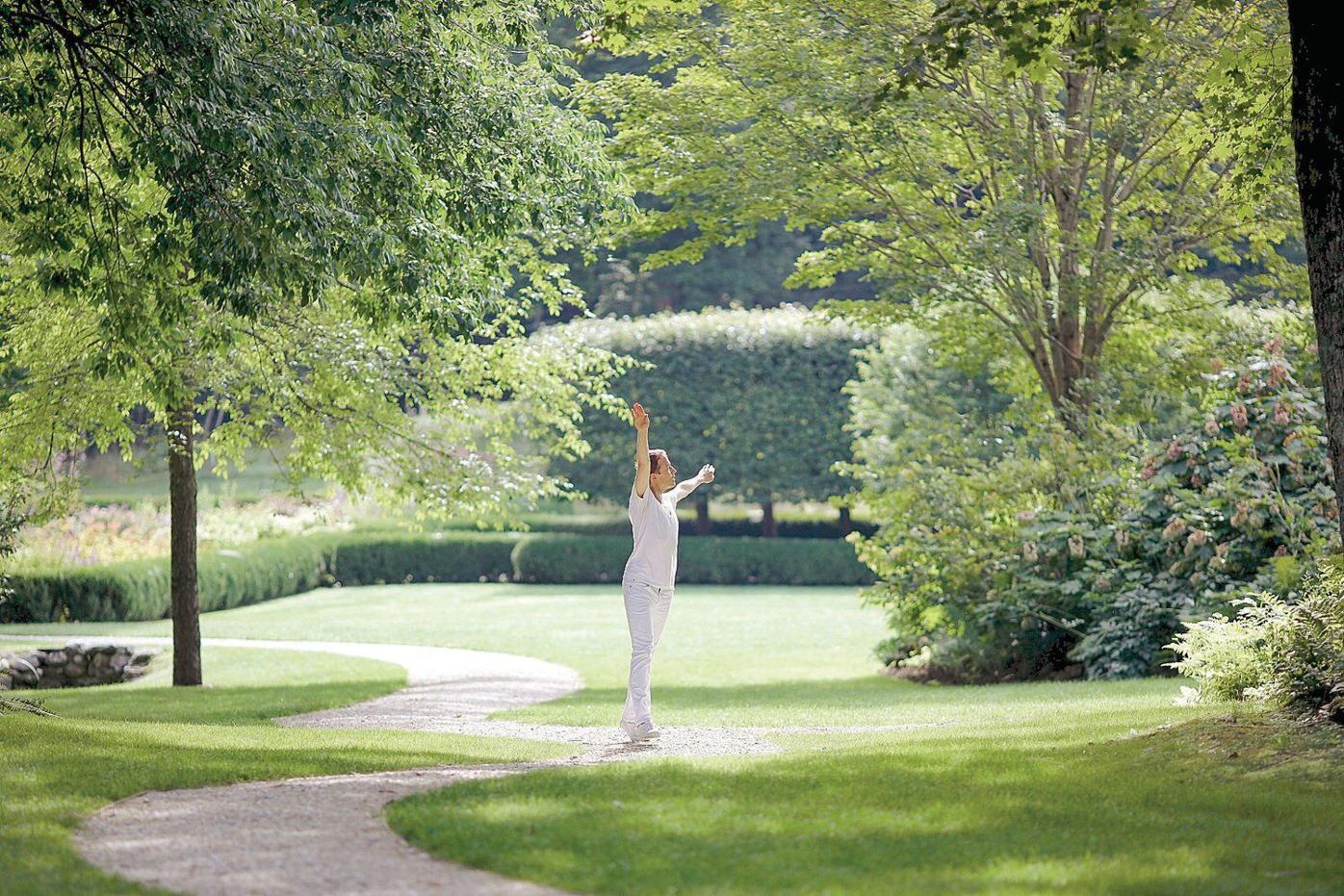 The performance begins on the side of the house and makes its way through Edith Wharton's gardens. 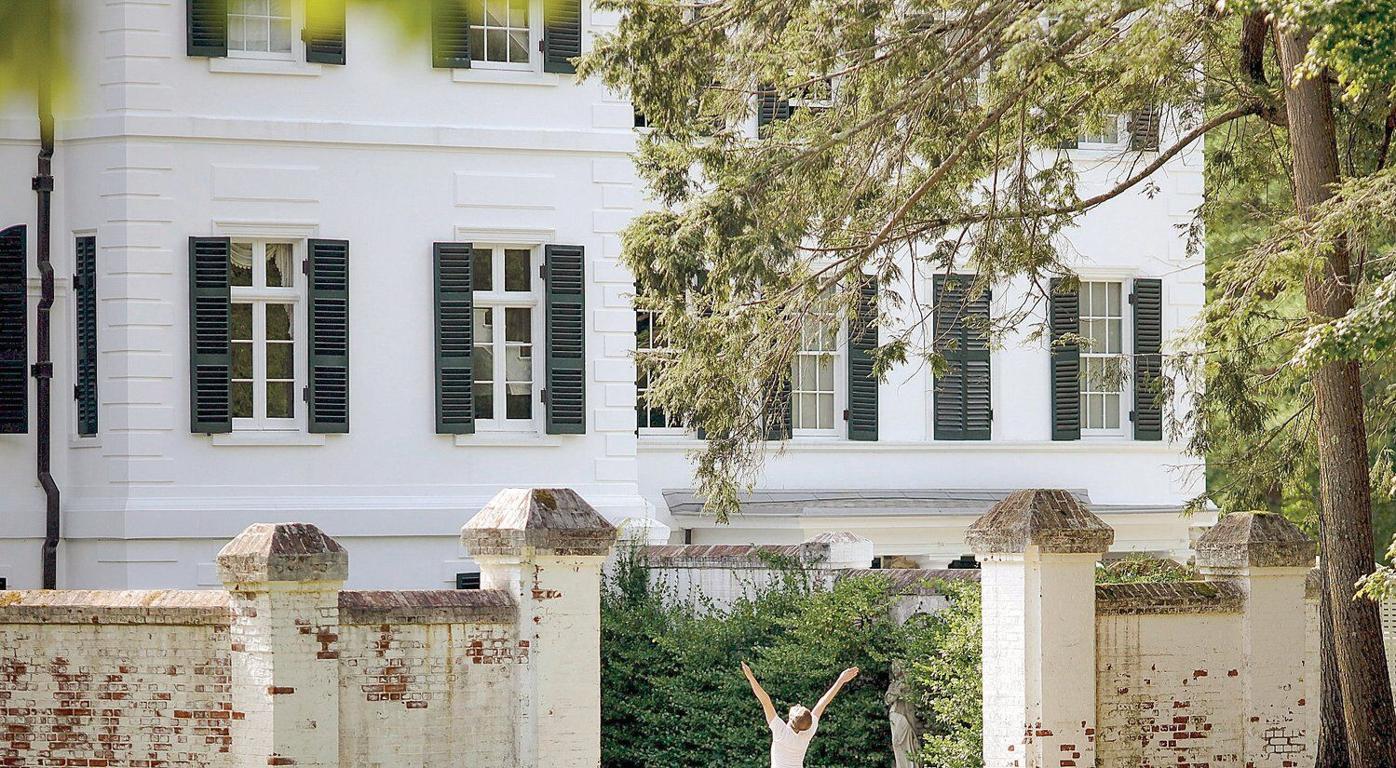 The final piece of the dance is performed in the walled-off Forecourt by the front entrance. 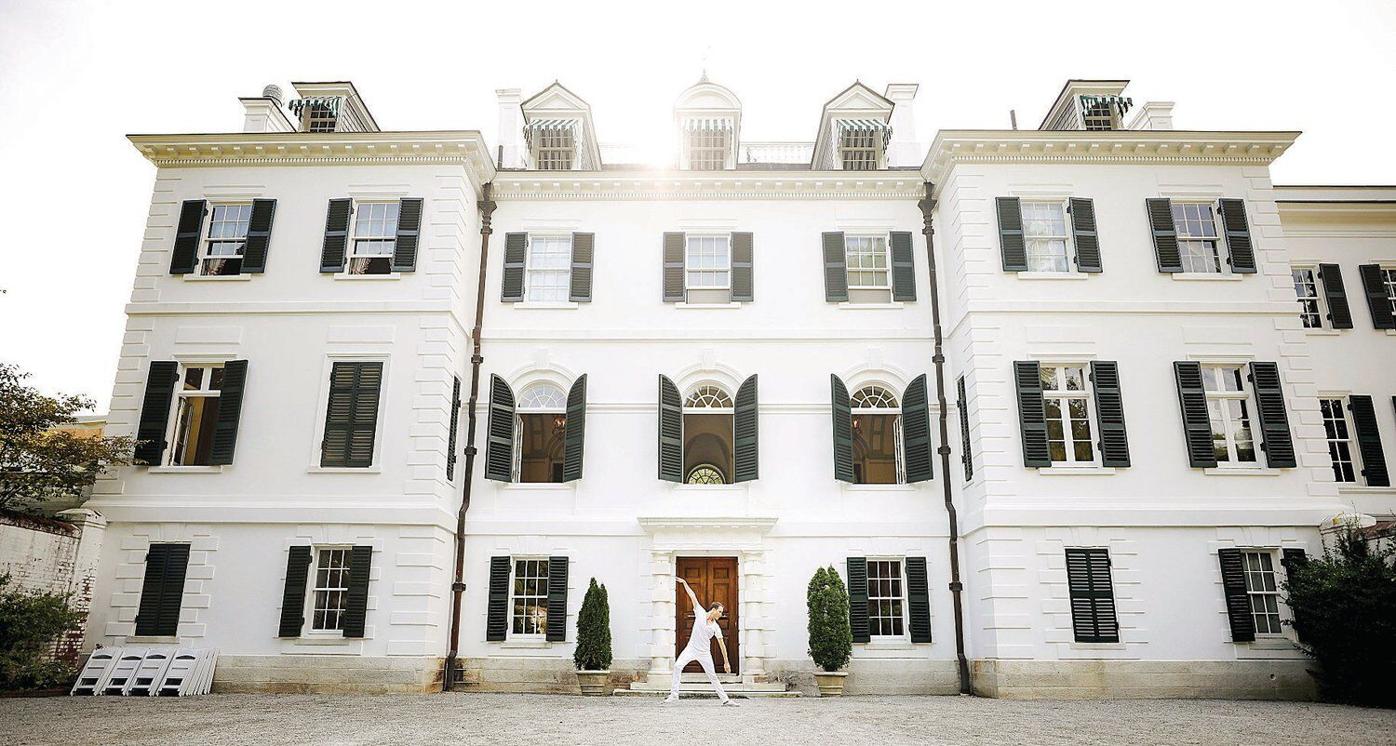 Dancer Ian Spencer Bell rehearses his new dance performance, "Banderole," which will be held outdoors at The Mount in Lenox from Aug.26 through Aug. 31. 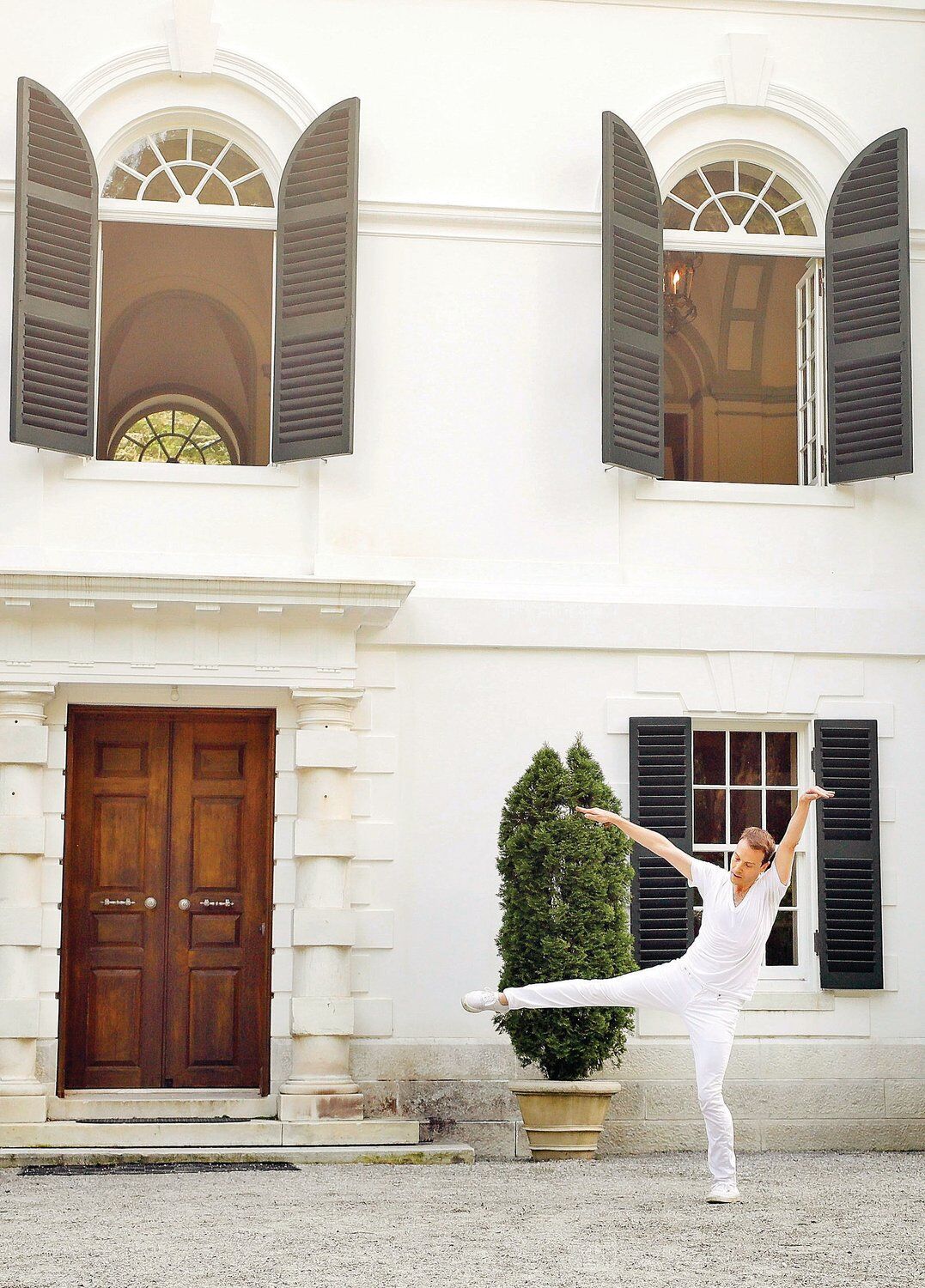 The 18-minute long piece will be performed at 5 p.m. each day and is free, though reservations are required.

The Mount's Forecourt felt like "an obvious performance space," for Spencer Bell.

The performance begins on the side of the house and makes its way through Edith Wharton's gardens.

The final piece of the dance is performed in the walled-off Forecourt by the front entrance.

Dancer Ian Spencer Bell rehearses his new dance performance, "Banderole," which will be held outdoors at The Mount in Lenox from Aug.26 through Aug. 31.

The 18-minute long piece will be performed at 5 p.m. each day and is free, though reservations are required.

LENOX — Ian Spencer Bell's new duet "Banderole" begins where the audience can't see it. The piece is specifically adapted for a performance at The Mount and ends up in the walled-off Forecourt by the front entrance. But it begins on the other side of the house, with dancers winding their way into view through Edith Wharton's gardens and paths before arriving at their destination.

It takes full advantage of the scale the space offers, and marks another cautious, socially distanced step in bringing performance back to the Berkshires. The dance is also uniquely suited for this moment: it is about the sense of constrained time and space that most of us have gotten to know over these past few months. It expresses the freedom and tension of existing in space, while reconnecting to foundational elements of movement.

"It has become a meditation, and also a self-preservation," Bell said.

The 18-minute long piece will be performed at 5 p.m. each day from Wednesday, Aug. 26, to Aug. 31. It is free, but online reservations are required and the audience will be limited to 12. Each performance will be followed by a conversation hosted by a guest moderator.

The work is named for a banderole, a long ribbon-like banner often used to present a text or message — think about the scroll where you'd write "Mom" in a classic heart tattoo. The dance conjures up some of those images, of unwinding and unfolding, and whipping back and forth in twirls and new directions.

Bell eventually decided his ideas would work best as a duet, and he enlisted longtime collaborator Joshua Tuason to join him. Unable to rehearse in person, they've worked out the piece through videos, Zoom and phone calls.

As a site-specific piece it makes the most of several outdoor elements at The Mount. From the wide-angle first appearance as distant figures in white in the French Garden to the narrower focused and intimate Forecourt, which Bell calls "an obvious performance space." The dimensions change with each phase, from the openness of nature, to the enclosed white and ivy-covered walls of the court, where even the sound of gravel underfoot becomes another element of the work.

In addition to being a dancer and choreographer, Bell is also a poet, and in the past has used spoken word in his work. Yet this one is wordless, and accompanied by an ambient musical score. "For this piece, I didn't feel it was essential because it is so heavily contextualized in this magnificent space."

The idea of bringing the performance to The Mount emerged over the past few weeks with the help of Bettina Montano, artistic director of Berkshire Pulse, which supports movement arts in the region and who let Bell use their studio space in Housatonic when it was safe. The idea of co-producing Bell's piece at The Mount came from their work together, and in response to figuring out what can be done in the ever-changing conditions of the pandemic.

"Everything has been about creating opportunities for our dancers and choreographers in the blink of an eye," Montano said. "We work with artists who can do that."

Michelle Daly, public programs director at The Mount, said Bell's piece reflects the spirit of collaboration and coming upon something unexpected that has been especially pointed this year. Everything has been planned almost week-to-week and there's been a real necessity of "jumping right in and solving problems" to make things happen.

"It felt like a great fit for us," she said.

The Mount had kept its grounds open during the pandemic, but only opened the house in mid-July, with reduced capacity, timed entry and self-guided tours.

For Bell, this is a return to performing again in front of an audience. He was teaching at a school in New York when it closed in early March, and he returned to the Berkshires to figure out what was next. In addition to his work in the city, he also is a visiting artist at Bard College at Simon's Rock and has taught workshops at Berkshire Pulse.

He said he found his work alone began to focus more on counting breaths rather than steps or beats, and experimenting with how long he could stretch out a phrase without losing the tension of the movement. He thought about finding different ways to fit it into time — one idea was to adapt the work to canonical hours of monastic practice, and perform segments throughout the day. But as it turned out, the real challenge became to fit the piece into space, specifically a grand one outdoors.

Dance indoors focuses concentration, and outdoors creates all kinds of challenges and opportunities. While he was developing the piece on the grounds, The Mount has been open. So, he has figured it out with visitors picnicking and grounds crews keeping things in shape. In addition to the always unexpected things that pop up — wildlife, motors, gusts of wind, weather.

"With outdoor pieces improvisation is really essential," he said. "It can be disorienting."

But accepting that push-pull has been part of the experience. "That's the agreement I've made with this dance," he said.

The important thing was to do something. As a living art, dance is especially endangered in the isolation of quarantine and what happens when you can't practice, collaborate and perform.

"All the dancers I know had this terrible fear, and I think it remains in certain aspects, that dance won't come back," he said. "There is information that is being lost right now because dancers can't dance."