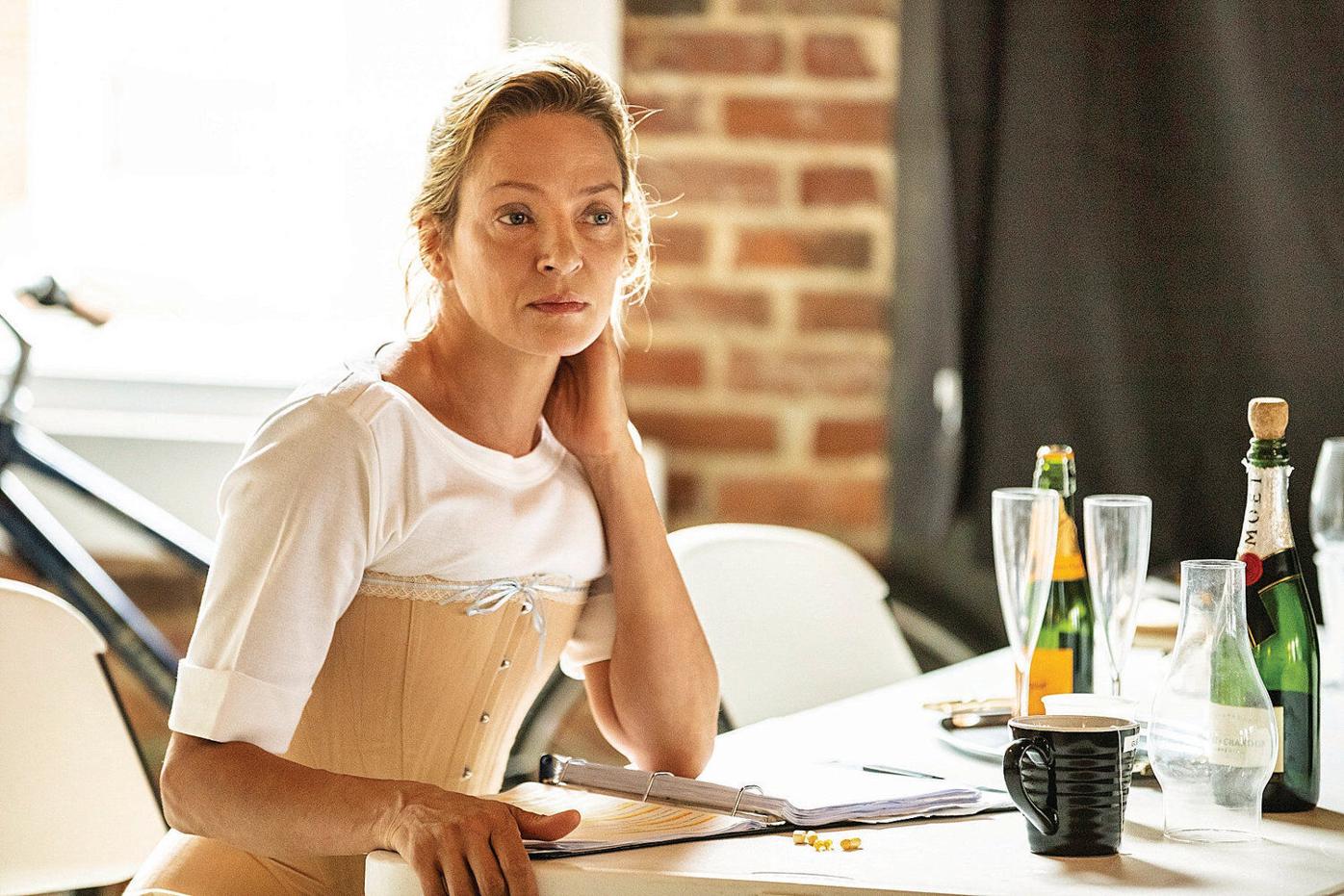 Uma Thurman, as Mrs. Alving, during a rehearsal of "Ghosts," a Williamstown Theatre Festival production. 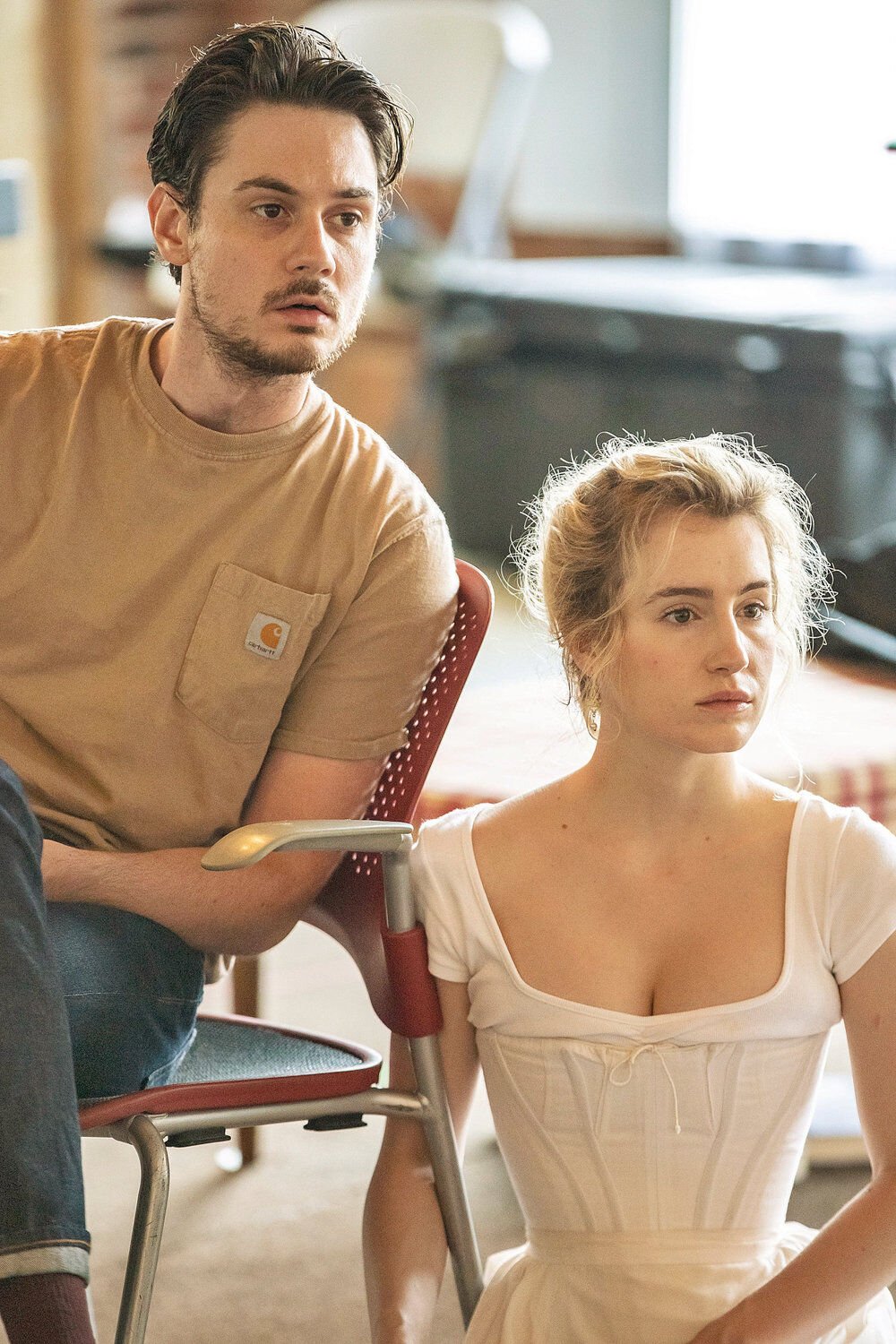 Tom Pecinka and Catherine Combs at a rehearsal of "Ghosts." The production opens Wednesday, July 31.

Uma Thurman, as Mrs. Alving, during a rehearsal of "Ghosts," a Williamstown Theatre Festival production.

Tom Pecinka and Catherine Combs at a rehearsal of "Ghosts." The production opens Wednesday, July 31.

WILLIAMSTOWN — Mrs. Alving has worked hard to preserve a certain memory of her late husband. She has had an orphanage built in his name, and she speaks glowingly of him in letters to her painter son, Oswald, whom was sent abroad at a young age. But the truth about Captain Alving's promiscuous past is haunting her in "Ghosts," and it threatens to destroy both her family and her budding sense of agency.

"She's on a quest to figure out, 'Who am I, and what can I be?'" said Carey Perloff, who is directing a production of Henrik Ibsen's 19th century drama that will begin performances Wednesday at Williamstown Theatre Festival's Main Stage. "And I think what's so honest about the play, if this were a feel-good American drama, she would triumph in the end. But the truth is, our journeys are always truncated, and we are never as brave as we think we want to be."

Perloff feels that Mrs. Alving's character "appeared by necessity" after the Norwegian playwright wrote "A Doll's House," a work that involves a woman, Nora, negotiating the strictures of marriage and gender norms.

"He kind of got off the hook in 'A Doll's House' by letting this woman walk out and slam the door. Then the question is, 'What happens to a woman who realizes she's more than what she's been allowed to be and that she is drowning in an untenable situation?' That's what's happening to Mrs. Alving," Perloff said.

At times, Mrs. Alving is powerful and witty. At others, she's vulnerable, especially when trying to win Oswald's love upon his return home for the orphanage's dedication ceremony. For Perloff, that duality is one of the reasons why Uma Thurman was fit for the role.

"It's what's so interesting about Uma, who's got amazing stature and beauty and fierce intelligence, but also a very genuine vulnerability that is alive in Mrs. Alving," Perloff said.

Thurman, a former Amherst resident, received an Academy Award nomination for her "Pulp Fiction" performance and recently made her Broadway debut in "The Parisian Woman." In Williamstown, she must portray a character whose spiritual mentor, Pastor Manders (Bernard White), disapproves of her reading and her lingering affection for him.

"She longs to be loved, and she can't find it," Perloff said.

Oswald (Tom Pecinka) is a candidate, but he arrives at the Alvings' home unwell.

"There's this kind of dread that he's experiencing. I think it's the day you come home, and you have a big secret to reveal about yourself," Pecinka said.

In a sense, he's trying to conjure a childhood he never had with Mrs. Alving while learning how his perceptions of his parents diverge from reality.

"It's that moment in your life when you as a child start to see your parent as an adult, as just another person who made a lot of mistakes, and reconciling that at a time when he's really in crisis. I think he's juggling those two things," Pecinka said.

He's also wooing the family maid, Regina (Catherine Combs). That relationship serves as the play's moral fulcrum, touching each of the play's five characters and raising questions about obligations to family and conscience that still resonate today. The Williamstown production uses a new translation from Paul Walsh.

"The strange thing that I didn't know is that the original play is written in a Norwegian that's like Old English," Perloff said. "It's an old Dano-Norwegian that contemporary [Norwegians] wouldn't speak today, anyway."

Walsh has been an invaluable resource at rehearsals, according to Perloff. She offered an example. At one moment in the play, Regina encounters Manders at the Alvings' home.

Together, they decided that while Manders was only referring to height, Regina was making a sexual reference, as well.

"It's a very awkward moment and actually quite a fascinating moment to play, but we wouldn't have known that unless we could look at Paul and say, 'What does the 'too' modify? What does it actually say in the Norwegian?'" Perloff said.

The director has worked with Walsh on several Ibsen plays. She didn't take to the playwright early on in her career.

"I feel like I had to grow up a little to get on the Ibsen train. I don't know why that is," Perloff said.

A production of a "A Doll's House" led her to fall in love with Ibsen's work, she said, which she didn't expect.

"I thought Ibsen was more schematic and kind of predictable, and what I found is that every character is fighting," she said. "The question Ibsen asks is, 'How do we live our lives?' That's the big question. Is it duty? Is it impulse? Is it instinct? Is it desire? How do we choose how to live our lives?"