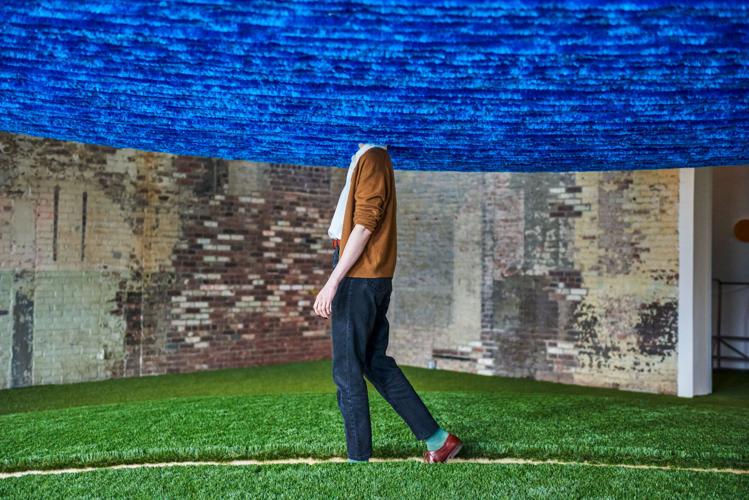 Museum visitors are encouraged to ascend the wooden steps of "Terra" where they will have the feeling of being both in the sky and on land simultaneously. 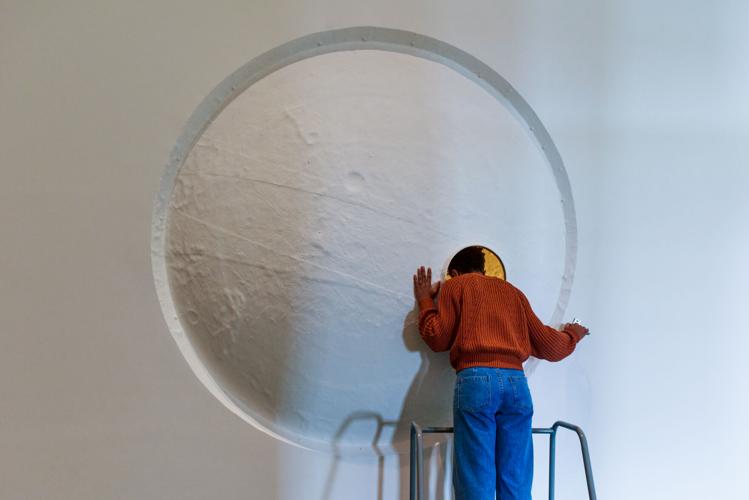 Visitors to Amy Hauft's "700,000:1/Terra + Luna + Sol" at Mass MoCA will find the only way they can view the artist's enormous model of the moon, "Luna," is by inserting their heads into the walled off gallery or through a special periscope. 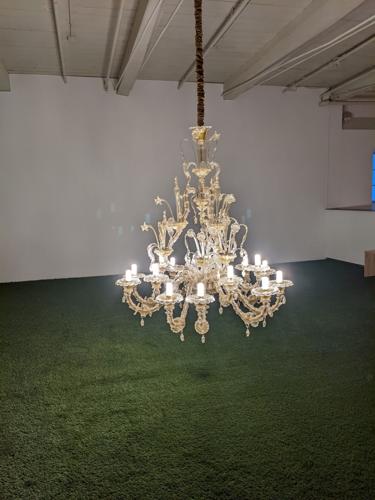 With "Sol," made in the Rococò style from crystal clear glass flecked with gold leaf and fitted with outrageously brilliant bulbs, Hauft recreates the brilliance of the sun. 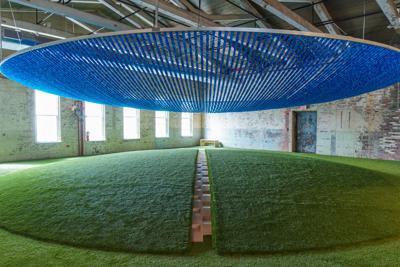 NORTH ADAMS — When entering the third floor exhibition space of Mass MoCA's Building 4, the vast openness of the gallery is striking.

The emptiness is intentional, as Amy Hauft's three-piece installation, "700,000:1 | Terra + Luna + Sol," is all about individual perspective and self-awareness; about our individual scale in relation to what's around us, to the greater universe.

COVID-19 safety protocols: Vaccinations are no longer required to enter Mass MoCA's galleries, but are required for performing arts events. Masks are encouraged inside the museum. Timed tickets are recommended but not required. Tickets can be purchased at the museum box office, with entry times on the hour and half-hour.

"I like the work to be hidden, if possible, so you can really lose yourself in the experience of the piece," Hauft said, during a talk with museum staff prior to the exhibit's March 12 opening. The exhibit is on view through January 2023.

The exhibit is comprised of three installations, "Terra," "Luna" and "Sol;" three celestial bodies interpreted in relation to one another; to the individual viewer; to the universe at large.

The project, Hauft says, came about after she read about a meteor that exploded 14 miles above the Russian Urals, shooting through the sky in a fiery blaze.

"There was a meteor that came through the sky in Chelyabinsk, Russia. It came careening across the sky, during rush hour, like 9:30 in the morning, a winter morning, and the sonic boom burst all of the windows in the entire city," she said. " The original meteor was about the size of a bus. It was incredible that this molton hot thing came soaring out of space and didn't hit anybody. So, I started looking into it and learned there's a 1 in 700,000 chance of being hit [and killed] by a meteor on Earth. Which is unlikely, but is still likely.

"If we get hit by a meteor, it's most likely going to be a mass extinction event. There are so, so many things to be worried about this in this world. And then this. It's so meta. That's when I thought about it as a name for the show. And honestly, it felt like an escape to be able to think of ourselves, as animals, as sentient beings in a universe ... Feeling like I'm on a planet and there's a star shining and I just want to make a relationship to that; to how human we are, how mortal."

With these thoughts in mind, Hauft puts her viewers in the middle of her installations.

"What I really love about Amy's approach to sculpture is how she's really in tune to the way in which the visitor's body interacts with the environment and it becomes so much about the negotiations between material, architecture, these created landscapes and our own bodies," said Denise Markonish, senior curator and director of exhibitions at the Massachusetts Museum of Contemporary Art. "This whole show is about the way we understand our own proximity to the world and beyond — into the galaxy; into the moon, the sun and the Earth and how those three things interact with one another."

And each piece of the exhibit, "Terra," "Luna" and "Sol" are about how the individual sees each piece, on its own and as part of the greater exhibit.

"Terra," the first work in the exhibition, is constructed from two enormous sphere-caps, one facing the other, placed on the floor and ceiling. The bottom sphere is vibrant green, covered in artificial turf, with a wooden staircase splitting it in two. Above, the sphere is a brilliant blue, made from long strands of thick blue chenille yarn. Visitors are encouraged to ascend the stairway, allowing their head to be engulfed in the upper blue "sky" sphere-cap. Here, with your head above the clouds, you are both on Earth and in the sky. Onlookers see a headless body, while the individual sees only the blue sky before them.

"I'm thinking about that mind/body split. What is knowing? What is knowledge? Whether it's physical knowledge or intellectual knowledge, we know that somehow they intersect," Hauft said, adding that the artificial turf is graded in a way to make sure the mound accessible for all.

Nearby "Terra" is "Luna," the moon, commissioned by the museum and made in residence during summer 2021 and again in December 2021.

"Luna" like its real-life counterpart is never fully visible. Here, only seen through a porthole window accessed by climbing a stepladder or an accessible periscope that provides the same view.

Inside the walled off gallery sits an inside-out moon, its crater-poked surface on the inside of a giant sphere. Be aware there's an optical illusion at work here, the craters actually pop-up from the surface, but the human brain reverses the effect, presenting the expected texture of the lunar surface.

Hauft created the model by procuring satellite maps of the moon surface from NASA, which she says cost $200 and came in three digital files. From there, Markonish said, the satellite images were broken down into templates to cut CNC forms that were turned into molds that were cast at Mass MoCA. The pieces, 140 in total, were then bolted together. The whole thing sits on a special wooden cradle.

Overall, the viewer can never really see the whole of "Luna," something we, in real life, experience with the moon.

The final piece of the exhibit, "Sol," hangs adjacent to both "Terra" and "Luna." "Sol," the sun, is a a large hand-blown glass Venetian chandelier made in the Rococò style from crystal clear glass flecked with gold leaf and fitted with outrageously brilliant bulbs. Like the sun, "Sol" is a sight to behold, but not one that can be looked at for too long because of its brilliance; its blinding light.

What does it mean to live in the ruins of the future? At Mass MoCA, Marc Swanson's answer is catastrophic beauty

Marc Swanson's two-part exhibition, "A Memorial to Ice at the Dead Deer Disco," is on view at Mass MoCA through Jan. 1, 2023. A companion exhibit opens at the Thomas Cole National Historic Site in Catskill, N.Y., on July 13.