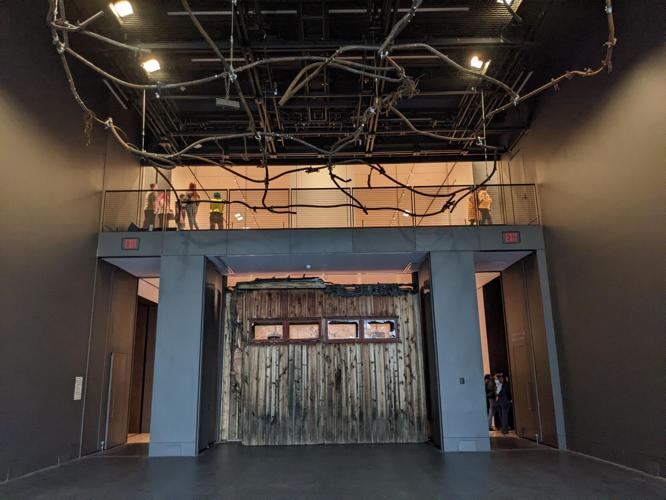 A wall and parts of the technical grid from Jacob's Pillow's Doris Duke Theatre are part of "Studio/Theater," an installation by Yve Laris Cohen, at the Museum of Modern Art in New York City. 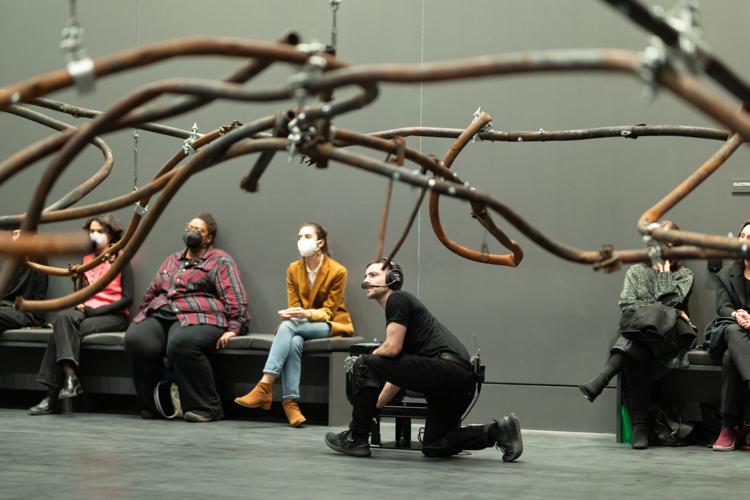 Artist Yve Laris Cohen, middle, lowers the sculpture made from the technical grid of the Doris Duke Theatre, during a performance of "Conservation," part of "Studio/Theater" at MoMA. 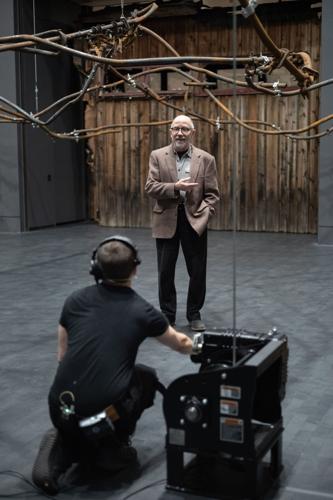 A scene from the Oct. 11 performance of "Preservation," part of "Yve Laris Cohen: Studio/Theater" at MOMA, features Norton Owen, director of preservation at Jacob's Pillow. Laris Cohen is in the foreground of the photo.

The fire erupted around 5 a.m. on Nov. 17, 2020, engulfing the 30-year-old Doris Duke Theatre on the sprawling 220-acre campus of Jacob’s Pillow in Becket. When it was finally snuffed out, only a husk of the renowned dance theater remained.

Immediately, the dance community mourned the loss of studio space, grieved together on social media and vowed to help rebuild it.

What: Installation made with remains of the Doris Duke Theatre at Jacob's Pillow, with corresponding performances "Preservation" and "Conservation."

Six days after the fire, contemporary and performance artist Yve Laris Cohen arrived at Jacob’s Pillow. All that remained of the wood structure was a single, charred wall and parts of the pipe grid that held the theater’s lighting rigs — a mass of steel pipes that had grown twisted and gnarled in the heat of the flames. It was the first time Laris Cohen had been to the campus.

“I just had a hunch, a gut feeling. I wasn’t going for the spectacle. I felt a deep research curiosity. That’s what pulled me here,” he said of that initial 2020 visit during an Aug. 7, 2022, PillowTalk at Jacob’s Pillow. “I wanted to come and see it. It moved me. I saw many of my dancer and choreographer friends on social media posting about it, at the time.

“I drove up here to see what a theater, that had been consumed by flames, looked like and partly, too, because fire is the cliche, the greatest threat to theater and the only time when free speech is restricted, in regards to yelling fire in a theater. So it was the worst thing that could possibly happen in this year of already global crisis, of illness and death.”

Laris Cohen’s work intersects with both dance and the visual arts, using theatrical architecture, elements that transform over time. He had a gut instinct that there was a project there, at Jacob’s Pillow, and reached out to Martha Joseph, assistant curator in the department of media and performance at the Museum of Modern Art in New York.

What followed over the next year was a site visit at Jacob’s Pillow and its archives, an official investigation into the cause of the fire, salvaging of the wall and technical grid and other items, two research residencies at Jacob’s Pillow, research into a comparable fire at MoMA and then later creation — an installation and two performances centered around the ideas of preservation and conservation.

In late October 2022, I stand in the Marie-Josee and Henry Kravis Studio, on the fourth floor of MoMA, in awe and contemplation as I stare at the remains of the Doris Duke Theatre. Here, a wall and a reconfigured theatrical grid are part of the aptly titled exhibition, “Studio/Theater,” the original name of the Duke.

My nose burns when I get too near, a faint smell of smoke still lingers on the wall’s wooden boards. Jagged glass shards jut out of frames, where once there were glass panes. There’s a sense of how fast the temperature inside the theater had to rise to cause the panes to bust and break, to twist the steel beams of the grid that hangs above my head.

I think of the fragility of arts institutions, of the impermanence of places, of art. I think of fire and destruction, of loss. I think of the fire that burned through Notre-Dame in Paris in 2019; of the art, natural wonder and cultural lost in fire that gutted the National Museum of Brazil.

Here, at MoMA, I view the repurposed wall of the Doris Duke Theatre, the hanging theatrical grid that Laris Cohen has cut apart and reshaped to fit the grid of the Kravis Studio. I watch as others stop and read the installation’s wall, wondering if they know of Jacob’s Pillow, of this theater’s meaning to a community, which was still separated by the pandemic when it burned.

The charred wall is now part of an impermanent stage, where once a week, on Wednesdays, one of two performances takes place. The grid, too, is part of the performance. I will not see the show that week, I’m there on a Saturday, as travel and schedules allow. I leave with more questions than when I arrived.

I return home, to the Berkshires, unfulfilled by what I have seen. I send out queries to Jacob’s Pillow, to MoMA hoping to be able to watch video of one of the performances, maybe both. There is no video, but I’m able to schedule calls with Joseph, with Laris Cohen. I connect with the curator, but the artist alludes me, despite several attempts to connect.

Joseph shares details of the performances. “Preservation,” is inspired by time spent in Jacob’s Pillow’s archive and with Norton Owen, the dance organization’s director of preservation. “Conservation,” the second performance, is focused on the eventual conservation of these pieces — the wall, the grid. Conservation is important, particularly in the story of MoMA. In April 1958, a fire at the museum took a life, destroyed a Monet and birthed the museum’s conservation department.

The performers, she shares, are all connected to the institutions, the fires. They include Owen, Stephen Furnstahl, the architect who designed Studio/Theater, Paul Hashagen a retired New York City firefighter, Becket selectman Christopher Swindlehurst and Liz Thompson, who led Jacob’s Pillow from 1979 to 1990.

The theatrical grid, which Laris Cohen reshaped to fit the Kravis studio space, she says, is suspended from that space’s grid. There’s a conversation happening there, that I feel I’ve overlooked. I learn that the Duke’s theatrical grid is part of the performance, moving from its place on the ceiling to the floor, depending on the performance. The week I was there it was suspended in the air.

In the days that follow, I’m still hoping to speak with the artist. In the meantime, I watch the videos that Jacob’s Pillow has produced with him, including the August PilowTalk. I read an ArtForum piece, in which he gives a first-person account of his work, the process. There is frustration, unanswered questions. I find myself unable to write about the installation.

I wait. I read about Laris Cohen’s previous work, about “Embattled Garden,” an installation in which he reconstructed one of Martha Graham Dance Company’s sets that was destroyed by the flood waters of Hurricane Sandy.

Not seeing the performance weighs on me. I am frustrated there is no recording. I begin to think of my frustration, of how it is nothing compared to what must have been felt by the entire dance community in 2020. When museums and theaters, the rest of the country was opening back up, dancers were still unable to connect, to come together as a community. Their creative community is one of shared spaces, of closeness and movement, of intimacy and perspiration. The dance community was one of the last to be able to reconnect, to create together in real spaces.

I think of how the trauma of the pandemic must bind them together, connect them in ways that I will never understand. I think of “Studio/Theater,” of the fires that connect Jacob’s Pillow and MoMA, two creative spaces, so far apart physically, yet connected by trauma.

I begin to see my frustration of not being able to see “Preservation” or “Conservation,” through a different lens. The performances are limited in number and in available seating, there are no recordings, no live streams. This is not unusual, I realize. How many dances and performances have taken place, with no photographs, no video, no livestreams? How many performances have only existed for the moment in time they took place, experienced only by the performers and the audience?

And I think of the records that exist, that are part of the show — the archival information that Laris Cohen researched and developed into two stories that are connected through fire, through love, through devotion to the arts. I think about the fragility of arts institutions and of the arts, of the impermanence of such things and it no longer matters that I was not able to see the performances.

It is finally enough to know of the performances, of the research and of the passion and the drive that brought these things about. Finally, it is enough to have seen this wall, the sculpture made from the grid. I do not know what will happen to this work when the exhibition ends. It is here today. It could be gone tomorrow. It could exist in a new form, three days from now. And will any of it matter? The experience of it, the connections made with the work, with other people, isn’t that what matters at the end of the day?

Perhaps the point of all this is the communal experience of art. Art experienced in a book, on a screen, from afar is different than viewing it with others, being part of an audience. The experience of experiencing art together, that is what is important.

We can conserve art and we can preserve it, but we also need to experience it with others. Sometimes it takes a fire (or a pandemic) to realize how fragile our world is, how important our communal experiences are and to remember how important art is.