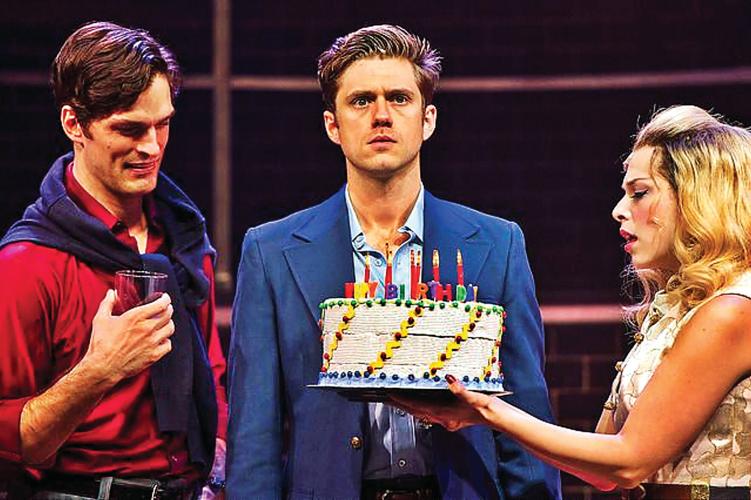 Paul Schaefer, as Peter, Aaron Tveit as Bobby, and Lauren Marcus as Amy during the birthday party scene in Stephen Sondheim's "Company" at Barrington Stage Company's Boyd-Quinson Mainstage in Pittsfield. 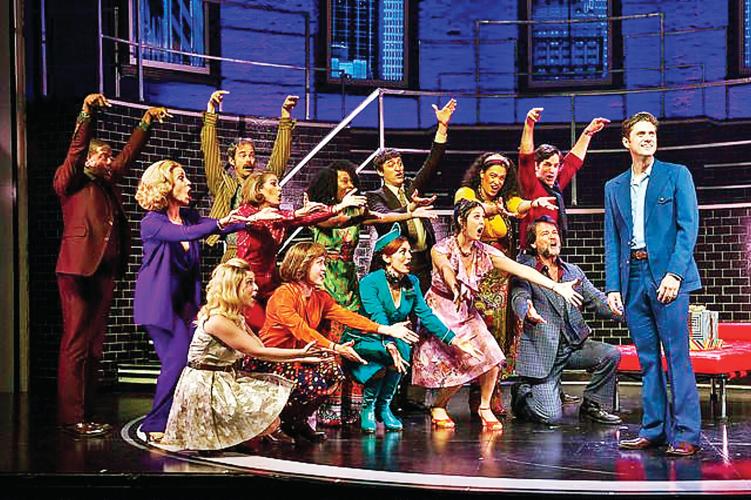 The cast of Stephen Sondheim's "Company," which is playing though Sept. 2 at Barrington Stage Company's Boyd-Quinson Mainstage in Pittsfield.

Paul Schaefer, as Peter, Aaron Tveit as Bobby, and Lauren Marcus as Amy during the birthday party scene in Stephen Sondheim's "Company" at Barrington Stage Company's Boyd-Quinson Mainstage in Pittsfield.

The cast of Stephen Sondheim's "Company," which is playing though Sept. 2 at Barrington Stage Company's Boyd-Quinson Mainstage in Pittsfield.

It occurs in Bobby's — and the musical's — final number, "Being Alive."

Bobby (a smart, masterly performance by Aaron Tveit) spends the first half of the song cataloging the downside of relationships, marriage in particular — the entanglements, the choking obligations, the surrenders. The tone is unforgiving. There is not an upside anywhere until Bobby comes, for the first time, to the words "being alive," which he then, as interpreted by Tveit, repeats three more times, slowing down each time as he hears and begins to consider what he is saying.

You can see a hint of something registering in Tveit's eyes. Music director Dan Pardo holds the orchestra in a vamp while Tveit's Bobby takes in what he is hearing; begins, finally, to put everything together and then goes back through the catalog he's just completed, this time with surging hope and welcome. It's a defining moment for Bobby. At 35, he has come of age, at last.

The number would be triumphant enough on its own. The fact that it comes virtually on the heels of the memorable Ellen Harvey's perfectly calibrated delivery of "Ladies Who Lunch" — a penetrating, sad, sardonic assessment of the failure and shallowness of her character, Joanne's, life and the women with whom she generally surrounds herself — makes "Being Alive" an absolute coup de theatre.

Set in New York City in 1970 (evocatively recalled in Sara Jean Tosetti's stylish costumes), "Company" focuses on a man, Bobby, for whom commitment has been, at best, elusive. On the day of his 35th birthday and a party in his apartment he is not supposed to know about, but does, his mind trips back, in non-linear fashion, to his close circle of friends — all of them married, with the exception of Peter and Susan (Paul Schaefer and Kate Loprest), who have found they are far more successful, and happy, living together as a divorced couple than as a married couple.

Bobby's journey to that defining moment in "Being Alive" means replaying in his mind various visits with his married friends, among them Sarah and Harry (Jeanette Bayardelle and Lawrence Street) — she is trying to break a compulsive eating habit, he is trying to quit drinking. They use karate as a means of exorcising the demons in their marriage. Boyd's casting of two black actors in these roles adds a dimension to Harry's account of his encounter with Los Angeles patrolmen, on each of two previous visits to the city, while staggering along the street, drunk, near his hotel.

During one of Bobby's visits, a typically uptight Jenny (a sublime Jane Pfitsch) indulges in some pot smoking with Bobby and her husband, David (James Ludwig).

In one of the production's most affecting sequences, a frantic, desperate Amy (Lauren Marcus), declares, in the song, "Getting Married Today," that she can't go through with her wedding — which is scant hours away. Her to-his-face rejection of her partner, Paul (Joseph Spieldenner) is cruel and hurtful. Bobby, the best man, looking on, can only witness while a strong relationship crumbles.

And there is the alcohol-soaked, emotionally self-destructive Joanne, who is on her third marriage, only this time to a man, Larry (Peter Reardon) who gets her and that fact only deepens Joanne's lack of worthiness.

For the men, Bobby, with his single lifestyle, is a beacon. For the women, he is convenient; reliable; in need of mothering; a sexual fantasy; always there, even if he is incapable of giving the advice or insight that is sometimes being solicited.

It's the contradictions in relationships that confuse Bobby, a theme that is reflected throughout Stephen Sondheim's distinctive score and masterly lyrics.

Tveit wasn't even born when "Company" premiered on Broadway in 1970, but watching him go to work on Barrington Stage Company's Boyd-Quinson Mainstage feels as though he and Bobby were destined for one another.

I say go to work, but in fact, Tveit's meticulously crafted performance looks so effortless. His singing voice is a marvel of control, breadth and expression and he dances with graceful assurance.

His timing, his sense of Bobby's sense of purpose is clear and resonant, especially in his scenes with the girlfriends — Kathy (Rebecca Kuznick), who comes to the realization, finally, that Bobby will never satisfy her need to be married and leaves him for someone who will; Marta (Nora Schell), a new arrival to New York who is one with the city's spirit; and April (Mara Davi), a slightly ditzy airline hostess who clearly moves to the beat of her own drum.

Boyd's clean, stylishly acted and staged production deftly navigates the bumps in George Furth's book — among other things, the opening karate sequence involving Bobby, Harry and Sarah is trapped in repetition and goes nowhere; the male characters provide context for the women but little else.

It's been 17 years since Boyd first tackled "Company." Barrington Stage was in Sheffield then. Tveit was 17. Just look how far they all have come.