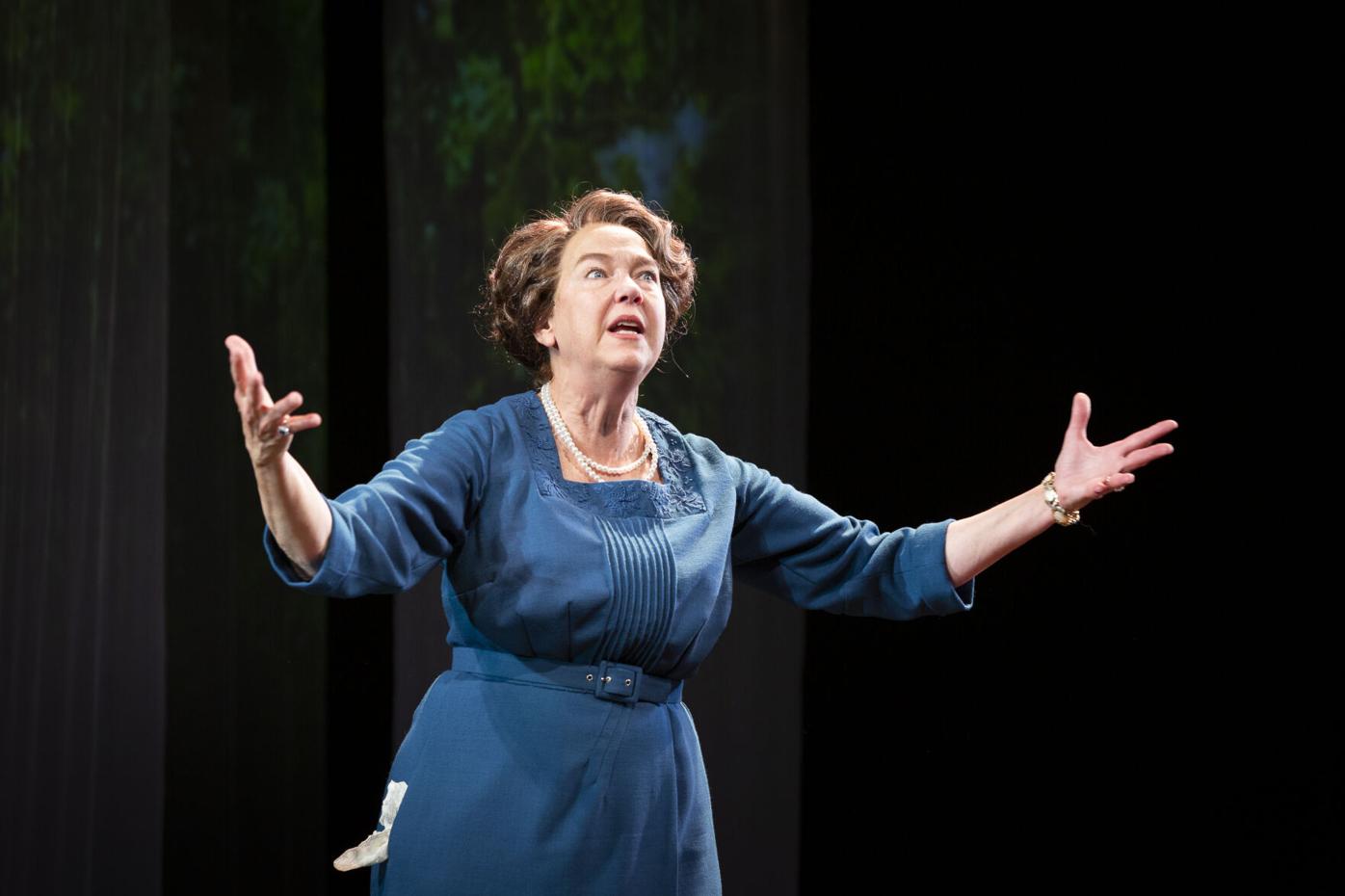 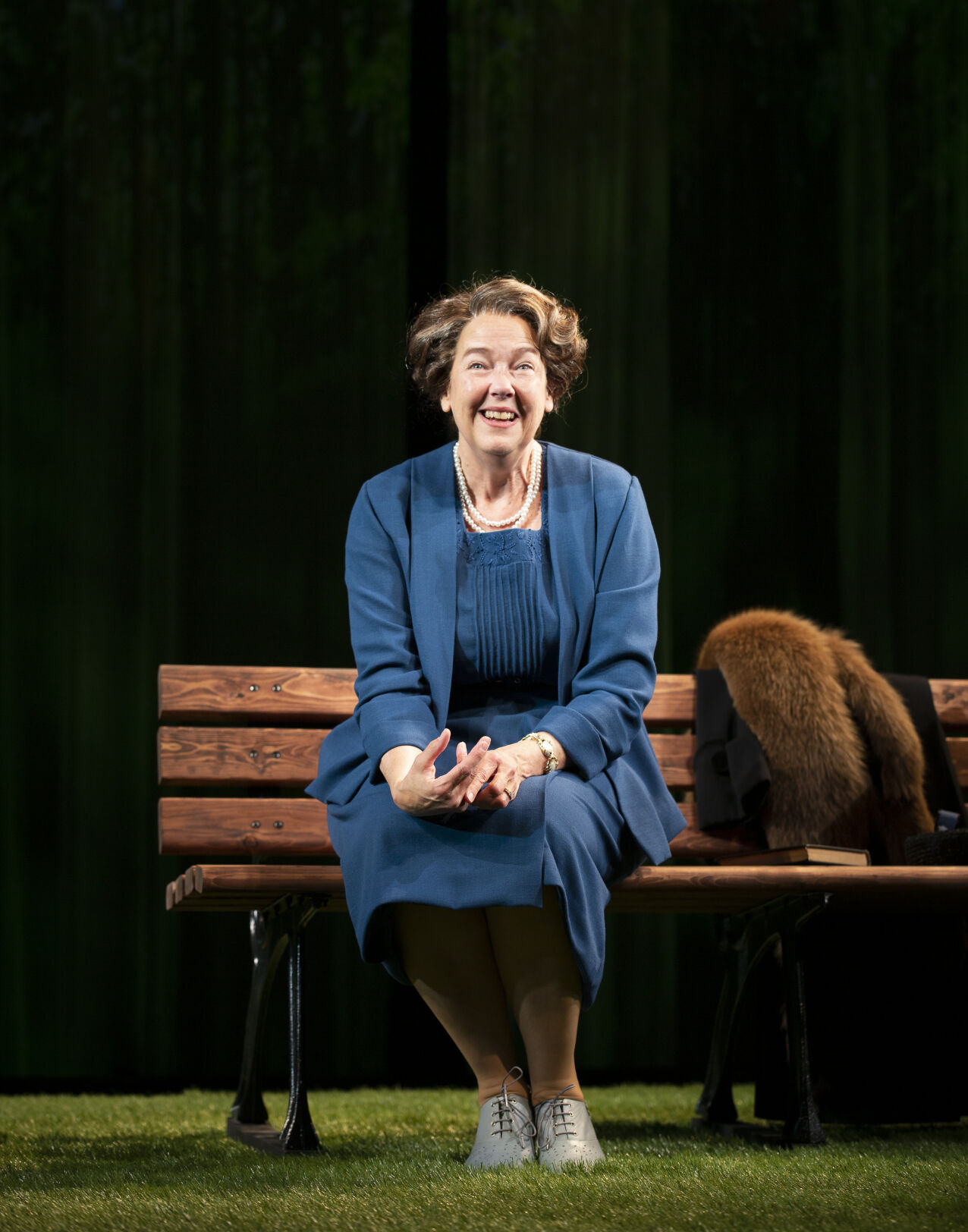 PITTSFIELD — There is a good deal going on at Barrington Stage Company’s Boyd-Quinson Stage these days. It is all to the good; more than good — exceptional.

With Harriet Harris in a breath-taking title-role performance, director Henry Stram’s production of playwright Mark St. Germain’s “Eleanor” is a just-about-perfect object lesson in theater as a storytelling medium at its very best.

The chief architect is St. Germain, who has given us in “Eleanor” a beautifully crafted, exquisitely structured play that gathers a wealth of complex family, world and American cultural history into a witty, poignant, intensely dramatic and insightful drama.

What: “Eleanor” by Mark St. Germain. Directed by Henry Stram

“Eleanor” is not only a portrait of a woman, an important woman; it’s a tapestry of the consequential landscape of pre-, post- and during World War II America; a context, foundation, if you will, for 21st century America in Trump/post-Trump America. (And, yes, Eleanor dashes off a delicious, sly comment on making America great again).

Perhaps the savviest thing St. Germain does right from the outset is to acknowledge the improbability of a dead person, particularly a dead person of some renown, appearing in some setting to speak to us, whomever “we” are supposed to be, about their life; justifying how they’ve lived, the decisions they’ve made. The willing suspension of disbelief in these “talking head” plays, as I call them, is not always so willing. We accept what these individuals say as the truth. There is no dramatic pushback; resistance. St. Germain’s Eleanor, on the other hand, acknowledges from the get-go that she is dead, buried in Hyde Park, N.Y. alongside her husband, Franklin Delano Roosevelt.

Rather than a room in the White House or their home in Hyde Park or Eleanor’s Hyde Park cottage, Val-Kill, the setting for “Eleanor” is, instead, Rock Creek Cemetery in Washington, D.C.; Eleanor’s favorite place when she was alive to sit, reflect, be private, especially in the spring.

No bones about it. She is dead. “My body lies beside Franklin’s, but not my spirit,” she says. Her spirit clearly is on a journey. “For the 40 years we were married,” Eleanor says, “we not only had separate bedrooms, but separate lives.” Even in death, FDR remains a mystery to Eleanor, almost as much as she remains a mystery to herself. There is a stranger inside her, she says, a stranger she is not brave enough to want to come to know.

“Who are any of us, but the choices we make?” Eleanor asks in a question that goes to the heart of St. Germain’s play. “How we lived, who we loved. Looking back, I can’t help doubting those choices. I need to know, to be unafraid. I can’t rest until I do.”

Theirs was a marriage of convenience, necessity, symbiosis; an unlikely wedding of fifth cousins once removed; he a dashing figure with a promising political career; she a homely, at best, “ugly duckling” who emerges as a wondrous swan.

Feeling deeply betrayed by the discovery Franklin has been having an affair with her secretary, Lucy Mercer, Eleanor contemplates divorce but she is dissuaded by Louis Howe, “a newspaper man who loved politics and Franklin because he saw a future in him,” Eleanor says. Howe not only understands the consequential damage divorce would mean for her husband’s political career, he understands the benefit of bringing together this odd couple. “He’s got the brains, charms, look and the money to succeed, big time,” Howe tells Eleanor. “What he doesn’t have, you do. You can put yourself in anybody’s shoes and see the world like real people do. He’s got the head for the game and you’ve got the heart.”

Eleanor drives a hard bargain, in the end, agreeing to stay on as Franklin’s wife, but with three caveats — that they maintain separate bedrooms in the White House; that Eleanor live her own private life; and, most important, that Franklin end his affair with Mercer and never see her again.

“His betrayal opened a wound that never healed my entire life,” Eleanor says in a particularly painful statement. Franklin’s betrayal rivals the betrayal of another man who was important to Eleanor, her father, who died when she was 10. “He was the true love of my life,” she says simply in a voice tinged with pain and disappointment.

FDR’s head for the game and Eleanor’s heart led to some pitched battles between the two, especially at the outbreak of World War II. “While the Allies fought the Axis, Roosevelt fought with Roosevelt,” she says. The two fought over FDR’s refusal to allow 100,000 German Jewish children into the country; his decision to send Japanese-Americans into internment camps; his lack of support for anti-lynching legislation, as well as legislation that would eliminate racially biased treatment of Black sailors.

In the best storytelling tradition, Eleanor delivers her narrative not only in her voice, but through vocal evocations of the myriad characters in her story — Howe; her mother; Franklin’s mother; their daughter, Sara; Winston Churchill, and FDR.

St. Germain’s play is a warts-and-all narrative that doesn’t hold back on Eleanor’s own sex life — her relationship with a handsome bodyguard and, more meaningfully, with a “dear friend,” Lorena Hickock; “Hick” as Eleanor refers to her.

Harris doesn’t miss a beat anywhere in this intermissionless hour-and-a-half evening. Her natural instincts are true and telling. Her Eleanor is witty; exposed; feisty; outspoken; fiercely principled; vulnerable; poignantly, and humorously, self-deprecating; lonely; isolated; deeply wounded and scarred by betrayal at the hands of people — her husband, her father, her daughter — to whom she presumably was closest.

Harris’ timing is flawless; her pauses, transitions meaningful and full. Her soft, reflective account of the onset of FDR’s polio during a vacation at the Roosevelt family home on the island of Campobello in New Brunswick, Canada, is deeply moving.

Simply out, Harris delivers such exquisite work here at the center of a seamless, exquisitely orchestrated production that is a complete, full-theater experience in every way.

Eleanor Roosevelt survived her husband by 17 years. She found her own light; becoming an international treasure in the process. Here, on Barrington Stage Company’s Boyd-Quinson Stage, Harriet Harris shines as a treasure all her own.

PITTSFIELD — A conceptual artist’s unusual project takes an unusual and unexpected turn in “Sister Sorry,” a new play by Alec Wilkinson that i…